Sometimes, it's easy to spot potential. Take, for instance, Michael Jordan, who is top-of-mind for many thanks to The Last Dance. It was obvious from the get-go that Jordan’s NBA career held great promise--though maybe none of us realized just how very great that promise was.

Other times, though, future ability isn't as obvious. During his first NBA season in Utah, John Stockton played fewer than 20 minutes per game--and his 0.471 field-goal shooting percentage was the lowest of his Hall-of-Fame career. That didn’t look nearly as promising.

The same holds true when it comes to finding promising stocks. For some companies, their competitive advantages are apparent, and their paths to growth and increasing profitability are seemingly clear-cut. Other firms, meanwhile, may be experiencing improving competitive advantages that aren't as noticeable.

Today we’re looking for promising stocks on the cheap. Specifically, we screened for the 10 stocks in our coverage universe with the lowest price/fair values and positive moat trends. We tossed out companies with poor stewardship ratings. Why? Managers who have a record of poor capital-allocation decisions may not have the wherewithal to establish or deepen their companies’ competitive advantages, no matter the trend. 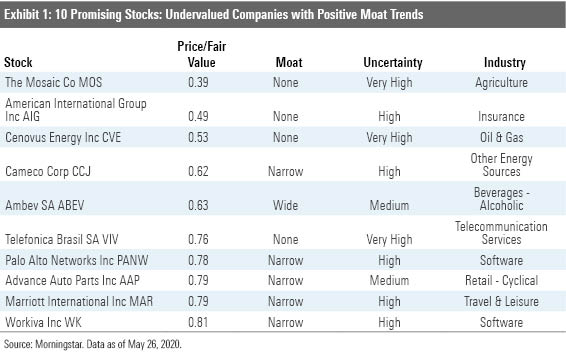 Here’s a closer look at three stocks from the list.

The Mosaic Co (MOS) The leading producer of phosphate and potash fertilizers has yet to carve out an economic moat, but it may be on its way, suggests analyst Seth Goldstein. The firm’s new K3 mine will provide Mosaic with more attractive unit costs. Over time, the firm is likely to become a low-cost potash producer, which would lead us to revisit our no-moat rating.

“Even if Mosaic does not fully transition all Canadian potash production to K3, the new mine should still lower the company’s position on the cost curve, which is the basis behind our positive moat trend rating,” says Goldstein.

The stock looks significantly undervalued today, trading at a 60%-plus discount to our fair value estimate. However, reminds Goldstein, we assign the stock a very high uncertainty rating, due to the company’s leverage and higher-cost position in phosphates, which makes our fair value estimate more vulnerable to fertilizer price volatility.

“However, with shares trading around our bear case fair value estimate or $12 per share, we think most of the bad news is priced in, with the market assuming fertilizer prices remain lower for longer,” he continues. “As a result, we see the current share prices as an excellent entry point for investors who can withstand the volatility.”

Palo Alto Networks (PANW) This pure-play cybersecurity provider has already has developed considerable switching costs--and thereby earns an economic moat rating of narrow--because replacing its innovative and effective security products would be disruptive, asserts analyst Mark Cash. And we think its switching-cost moat source is strengthening, thanks to its customer reorder track record, expansion of customer lifetime value, and growing customer base, he adds.

“In our view, shelter-in-place occurring across the globe due to COVID-19 is helping drive demand as enterprises and government entities require protection for their remote users,” says Cash. “Customers adding cloud-based security resiliency and increased remote security capacity could be the new norm in our view, and we do not see increased demand as ephemeral.”

Trading at more than a 20% discount to our fair value estimate, Palo Alto is our top idea in the cybersecurity segment.

Dig Deeper: Opportunities Are Arising in Software and Cybersecurity

“As Advance refocuses on closing performance gaps, we think it is poised to build share in a market that should see consolidation behind large, national retailers that can leverage a broad distribution network to efficiently provide a high standard of service,” he asserts. “Signs of progress in its turnaround have coincided with strong industry conditions, which we expect to remain favorable long term.”

Indeed, the firm’s scope gives it a cost advantage, and its brand-intangible assets are especially important in the commercial side of the industry. And with the industry’s move toward greater part availability, Advance will only deepen its competitive advantages against smaller regional players.

Susan Dziubinski does not own (actual or beneficial) shares in any of the securities mentioned above. Find out about Morningstar’s editorial policies.