Income has become hard to come by. If that was true before 2020's coronavirus closures began to wreak economic havoc, it is especially true after. The 10-Year Treasury's 0.58% to 0.77% yield since April is around all-time lows and won't beat the historic inflation rate of about 2%. Corporate bonds might edge the cost of living--the Bloomberg Barclays U.S. Corporate Bond Index had a 2.70% yield to maturity on April 30, 2020--but those bonds' prices could fall if rates rise, and they come with some default risk.

Dividend-paying stocks may not seem worth the risk, either. Between late February and May 13, 2020, at least 235 domestic firms in 40 of 69 industries cut or suspended their dividends and/or canceled stock buybacks. More cuts are likely, especially if the country's economic slump is prolonged.

Yet, for income-oriented investors, the relative attractiveness of dividend-paying stocks is high. Exhibit 1 compares the S&P 500's projected one-year yield with the 10-Year Treasury's yield at the end of each month going back to November 1999. The spread advantage of stocks peaked in March 2020, when the S&P 500's 2.49% projected yield was 3.55 times the 10-Year Treasury's 0.70% yield, and it remained historically elevated in April. Even if further dividend cuts and suspensions reduce stocks' yield, the long-term growth potential of dividends and the possibility of share price appreciation make stocks a better deal. Warren Buffett said as much on May 2, 2020, at the Berkshire Hathaway (BRK.B) annual meeting.[1] 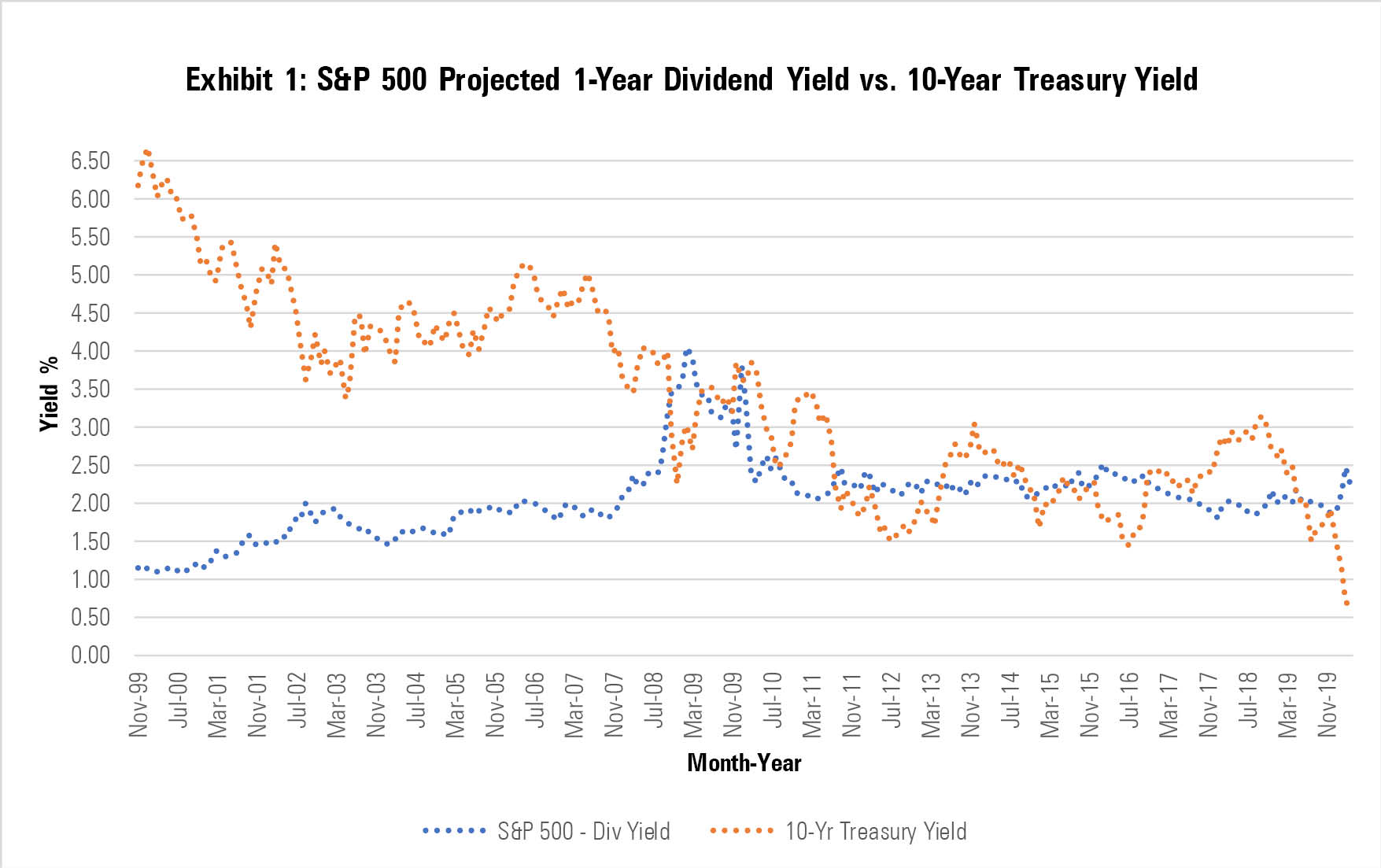 Sources: Morningstar Direct and U.S. Department of the Treasury.

Broadly speaking, dividend strategies fall into two camps. High-dividend-yield strategies focus on stocks with above-average current yields relative to the broader market to maximize income. Companies with stout dividends are often mature and pay out a substantial portion of their earnings to maintain the dividend and increase it to the extent their slow-growth businesses allow. In some cases, the dividend itself hasn't grown, but the stock's yield has because its share price has fallen. It takes skill to determine whether there's a bargain to be had or a company's prospects have taken a turn for the worse and it could soon become distressed.

Dividend-growth strategies, on the other hand, prioritize companies whose dividends are typically modest in relation to their earnings and their stocks' yields versus the broader market but are growing at an above-average rate along with their businesses. The challenge for income-oriented investors with these strategies is that the current yield may not be enough to meet one's needs.

Like bonds, equity yield is a function of price. When prices drop, yields rise, and vice versa. While the March crash boosted many stocks' yields, the April rally dropped the projected yield of indexes like the FTSE High Dividend Yield and the Nasdaq US Dividend Achievers Select by 9.0% and 7.6%, respectively, as Exhibit 2 shows.

Should volatility return, as many expect, a benefit of dividend-paying stocks is they offer some downside protection. Here, dividend-growth strategies have an advantage over their high-dividend-yield counterparts in two respects. First, dividend-growth stocks are typically more resilient. For example, Exhibit 3 shows that the Nasdaq benchmark's peak-to-trough loss was 3.4 percentage points less than the FTSE index's in early 2020's bear market. That resiliency has played a part in the Nasdaq benchmark's superior trailing returns, as Exhibit 4 depicts.

Second, dividend-growth strategies are often less susceptible to dividend cuts or suspensions. Out of the Nasdaq US Dividend Achievers Select's 182 constituents, only TJX Companies (TJX) suspended its dividend, while Rollins (ROL) and 1st Source (SRCE) cut their dividends by 33.33% and 3.45%, respectively, between late February and May 13, 2020. Five other companies canceled buyback plans, as seen in Exhibit 5, but their dividend-growth profile, so far, remains intact. 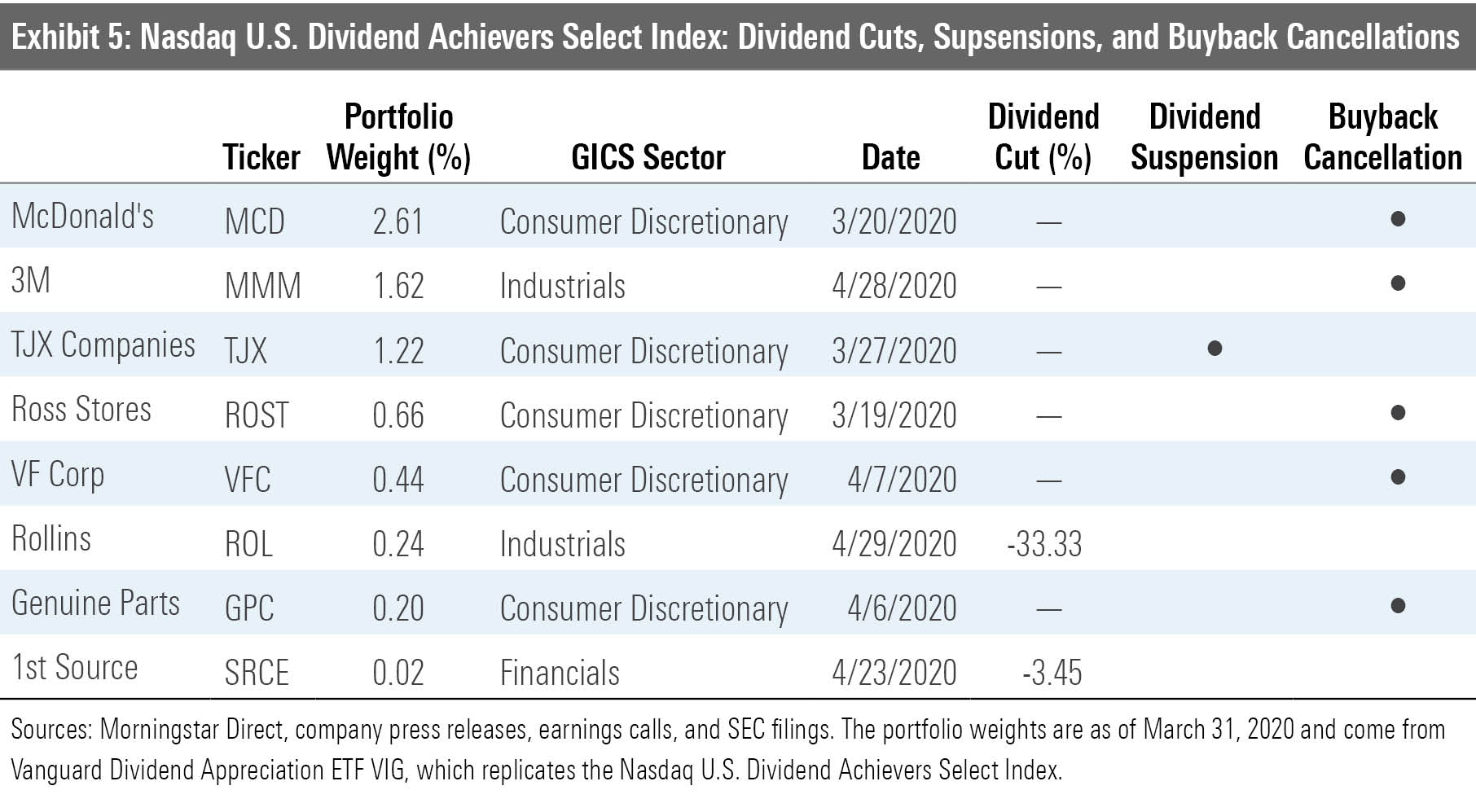 In contrast, out of the FTSE High Dividend Yield Index's 399 stocks, 24 companies cut their dividend by an average of 68%, and another 19 suspended their dividend over the same period. A combination of paying out a greater portion of their earnings and bigger debt burdens played a role. As of April 30, stocks in the FTSE benchmark had median payout and debt/capital ratios of 58.0% and 48.5%, respectively, versus 43.0% and 40.9% for the Nasdaq index's. When the FTSE benchmark stocks' earnings plummeted, there was less cushion to meet contractual debt obligations. So, dividends, which are voluntary, became expendable.

There are good active and passive options to get exposure to dividend-growth stocks' advantages. Vanguard Dividend Appreciation ETF (VIG) tracks the Nasdaq US Dividend Achievers Select Index and has been very difficult for active managers to beat.

Vanguard Dividend Appreciation ETF's Morningstar Analyst Rating recently dropped to Silver from Gold because its requirement that companies have at least 10 consecutive years of dividend growth to be included precludes it from holding promising, newer dividend growers. That same requirement will also force it to drop the likes of TJX Companies, which could return to its history of dividend growth if its stores reopen and shoppers return.

Those are small disadvantages, but ones a savvy, proven active manager can exploit to gain an edge on the index. Gold-rated Vanguard Dividend Growth's (VDIGX) Donald Kilbride and Silver-rated T. Rowe Price Dividend Growth's (PRDGX) Tom Huber have done just that over a decade-plus and have good shots of finding bargains in the current environment. Their respective trailing 12-month yields of 1.85% and 1.36%, as of April 30, were not as a high as one would like, but their dividends should grow over the long term. Investors who keep total return in mind and can tolerate the additional volatility that comes with equities should do well.

Alec Lucas has a position in the following securities mentioned above: VDIGX, BRK.B. Find out about Morningstar’s editorial policies.