The current market volatility sheds light on the strengths and limitations of different risk models.

Given the frequency of market declines like this--in which the market falls 20% or more--and the subsequent recoveries, you might think that investment professionals would use returns distribution models that account for these extreme declines and recoveries to inform their investment decisions.

Some investment professionals tend to use tools such as portfolio optimizers and Monte Carlo financial-planning models that rely on thin-tailed models. “Thin tails” refer to thin ends of a distribution curve, which indicate a low probability of extreme events--probabilities that are so low that they can easily be ignored or missed.

These are the models that feed into the concept of a market crisis as a once-in-100-years event. However, our analysis of the historical return data has shown that these crises are far from rarities.

Here, I take a closer look at the different risk models.

How Distribution Models Compare to Real Return Data To see how different distribution models compare, I mapped them onto the chart below, based on the monthly real market returns in the United States from January 1886 to March 2020. The chart includes:

From the chart, we can see:

Accepting the premise that financial returns lack finite variance would mean that Markowitz’s mean-variance model of portfolio construction is invalid. So are asset-pricing theories such as the capital asset pricing model and the arbitrage pricing theory. In other words, accepting the log-stable model of returns would mean rejecting nearly all of standard financial economics.

Financial economist Paul H. Cootner wrote of this implication in his 1964 book, "The Random Character of Stock Market Prices," “Surely before consigning centuries of work to the ash pile, we should like to have some assurance that all of our work is truly useless.”

How the Log-Stable Distribution Model Takes Shape Around the World We can also evaluate the stable Paretian model’s two shape parameters--peakedness and skewness--to show how it applies to asset returns and how the lognormal model falls short. 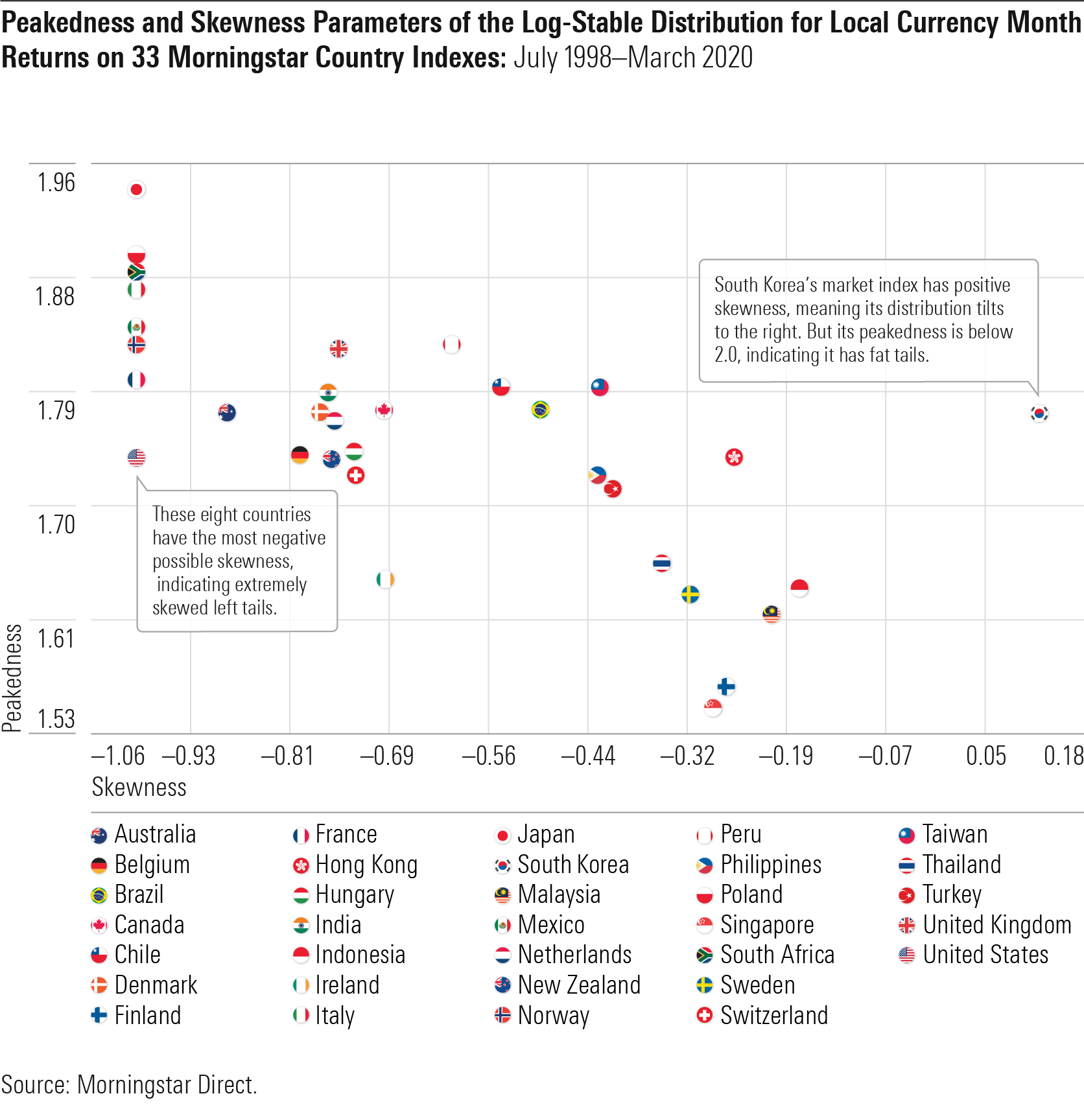 To see how well the log-stable model works as a model of stock market index returns of countries around the world, I fitted it to the monthly returns of Morningstar stock market indexes for 33 countries (including the United States and Canada) from July 1998 to February 2020. These results are shown on the chart below as a scatter plot of the skewness and peakedness parameters.

This analysis shows that the notion of historical return distributions having experienced extreme events, particularly extreme negative events, applies not just to the U.S. but to country stock market indexes from around the world. This departure from what standard risk models predict suggests there might be some credence to Mandelbrot’s work on the distribution of price changes.

Using Distribution Models That Offer a Robust View of Risk Extreme market events are everywhere in the historical stock market return data. They’re prevalent not only in the U.S. and Canada, but in markets all over the world. Yet, these extreme events do not exist in the standard statistical models of finance.

This doesn’t mean investors should throw away the standard ways of summarizing risk. Rather, they should understand both the limitations of standard risk models and the potential of the log-stable model. For a more complete assessment of the risks of investing in stocks, investors should use risk models that tackle three key questions:

Downturns are numerous and can be long and painful. Investors who are prepared for these events will be better able to endure the crisis and benefit from the inevitable recovery.

Download our paper to learn how Morningstar’s risk models demonstrate skewness and fat tails. Get My Copy