For the second year running, we applied Morningstar's Revenue Exposure by Region data to our family of country indexes, which span 48 developed and emerging equity markets. The aim is to reflect geographic exposure, based not on where companies are located but where they do business. With the coronavirus pandemic ravaging the global economy, investors are both examining their portfolios for vulnerabilities and considering opportunities. Linkages between markets are important to consider.

An Interconnected World According to the map below, thirty-one of Morningstar's 48 country indexes source more than one third of their revenues from outside their home markets, using estimated data from corporate filings. That includes the United States and Japan, both of which saw an increase in foreign-sourced revenue compared with last year's study. Look at the global players that dominate the Morningstar US Market Index--Microsoft (MSFT), Apple (AAPL), and Google parent Alphabet (GOOG)--and the two largest companies in Japan's market, Toyota and Sony, and it's clear why. 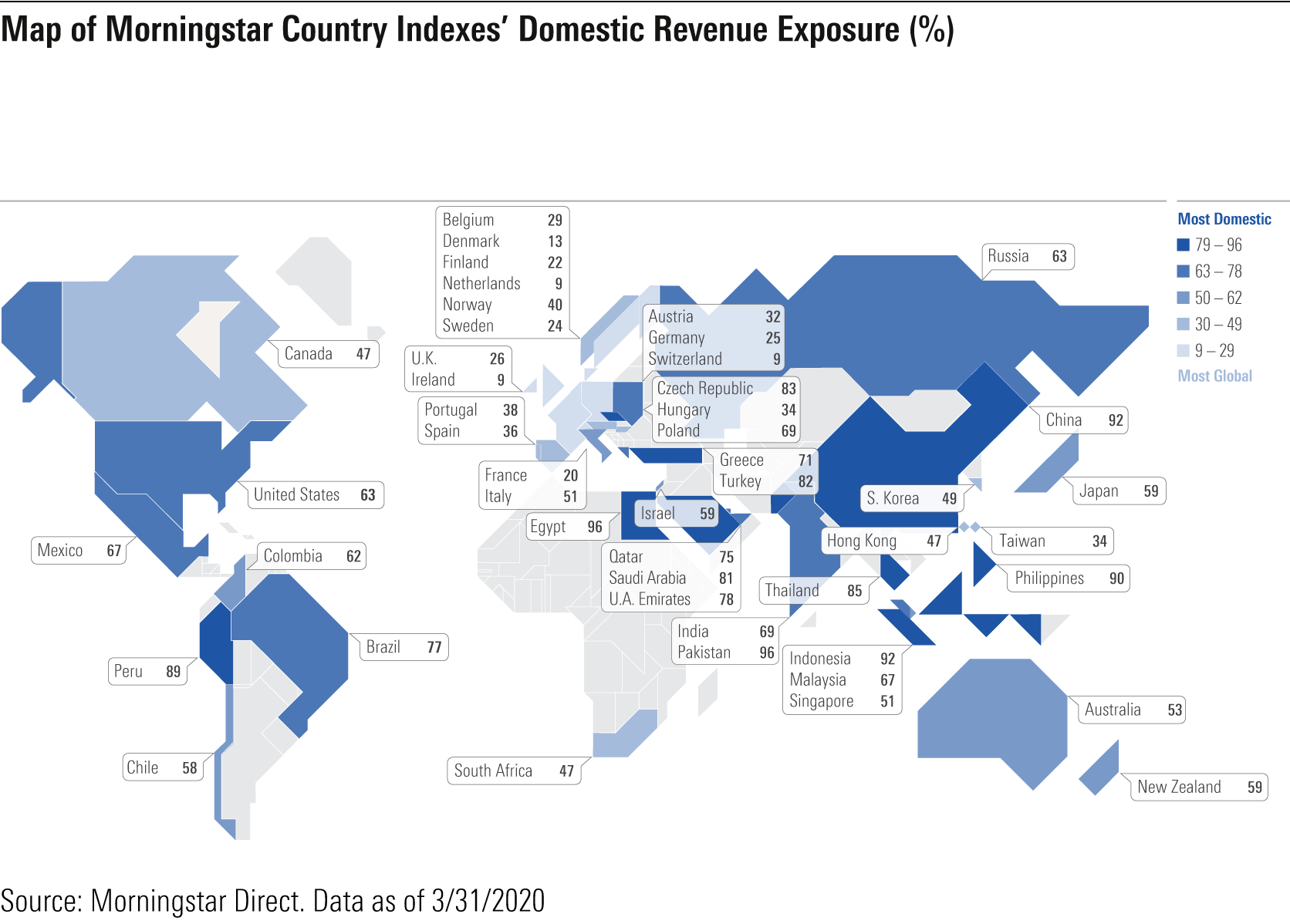 China, by contrast, is a domestically focused market. Exports may represent a significant share of its economy, but China's equity market, dominated by companies like Alibaba and Tencent, is inward-looking.

China is typical of emerging markets with large populations. Pakistan, Indonesia, the Philippines, Turkey, and Brazil are also quite self-contained. India is an exception; its market has a large slug of global technology players.

Meanwhile, countries like Germany, South Korea, Taiwan, and Singapore may have responded well to the global pandemic, but their markets are highly exposed to the global economy.

European markets are by far the most global. Ireland, the Netherlands, and Switzerland top the list of the most outwardly oriented. Other markets with significant revenue sourced abroad include Canada, South Africa, and Australia.

Hidden Exposures The U.S. is critical to the revenues of markets around the world. Ireland is most exposed to the U.S. economy at roughly 35% of revenue. Canada, Switzerland, Denmark, Taiwan, the United Kingdom, the Netherlands, Israel, and Germany all derive 20% or more of their revenue from the U.S. Mexico's market, surprisingly, is more closely linked to Latin America than to the U.S.

China is a key source of revenue for many markets, especially Singapore, Taiwan, South Korea, and Hong Kong. The U.K. is the non-Asian market most dependent on revenue from emerging Asia, thanks to index constituents like HSBC. Switzerland is heavily dependent on China, driven by companies like Nestle and Roche, and so is France, with Sanofi, LVHM, Total, and L'Oreal. The U.S. has an estimated 7.3% revenue exposure to China, far higher than the other way around.

It's no surprise that eurozone countries are interdependent. But investors should also note that European markets outside the eurozone--in Scandinavia and Switzerland--are heavily exposed to the region. The U.K. sources just 12% of revenue from the eurozone. It is tied more closely to Asia and the U.S. than it is to Europe, diminishing the impact of Brexit for investors. South Africa is the non-European country with the most eurozone exposure; that's thanks to top index constituent Naspers, a global Internet player.

Other interlinkages abound. The Spanish market derives nearly one fifth of its revenues from Latin America. New Zealand is dependent on Australia for 15% of its market's revenue, while Portugal relies on Poland to roughly the same degree. Ireland generates 18% of revenue from the U.K.

Clearly, national equity markets are not as national as many investors assume. This will influence how a global economic downturn impacts different markets.

Dan Lefkovitz does not own (actual or beneficial) shares in any of the securities mentioned above. Find out about Morningstar’s editorial policies.