There’s no question that the first quarter of 2020 was a tremendous shock to the financial markets, on top of the wider social and public-health implications of the coronavirus pandemic.

But what sort of effect did the volatile quartile have on longer-term results?

This issue came up for the manager selection team at Morningstar as we went through our normal quarterly review process at the end of March. We noticed that in some cases funds that we track had flip-flopped their quartile rankings dramatically, even over longer-term periods. (See “Stock Funds With the Biggest Change in First-Quarter Rankings.”)

This got us wondering how widespread a phenomenon this might be, and how divergent it was from historical patterns. If you see a fund undergo a big change to its longer-term rankings in the wake of recent volatility, how should those new rankings figure into your assessments? (The full version of this article, with a more detailed look at the data and methodology, is available for Morningstar Direct and Office clients here.)

A Corona-quake for Return Rankings To help get at a more systematic answer to anecdotal observations, Maciej Kowara, quantitative research strategist in Morningstar’ manager research group, helped run some data analyses. We focused on quartile transitions--the extent to which funds’ return rankings over a given time period moved from one quartile to another over successive quarters. We calculated the average percentage of funds that moved from one quartile to another of their category for one- and five-year periods over the past 20 years, then compared those figures with the most recent quarter change between fourth-quarter 2019 and first-quarter 2020.

What did the data show? The short answer is that the anecdotal evidence did not deceive: The extent to which funds saw major changes in their quartile rankings between the fourth quarter of 2019 and the first quarter of 2020 was indeed more extreme than they had been on average.

To fully answer the question about the longer-term effect on rankings, we compared the historical averages in how frequently funds moved between quartile rankings (from one quarter to the next) with the rate of change from Jan. 1 to March 30, 2020. We looked at one-year and five-year category rankings; we also included both dead and living funds in our historical analysis. The deviations in certain categories were dramatic, to the extent that they not only affected the current quarter but longer-term periods as well.

The following exhibit shows three tables side by side: The first shows the historical probability that a small-value fund’s one-year ranking would shift from one quartile to the next over a single quarter, the second shows the actual quartile changes in first-quarter 2020, and the third shows the delta of those changes relative to the historical averages.

For example, historically about 89% of funds ranked in the top two quartiles over a one-year period would remain in their respective quartiles in a succeeding quarter; in first-quarter 2020, however, only 74% of funds stayed put (a 15-percentage-point drop). Conversely, only 11% of bottom-quartile funds leap all the way to the top quartile in a succeeding quarter historically, but 30% of the category’s funds did just that in the first quarter of 2020.

In the following table, funds in the row labeled Q1 were in the top quartile, and the horizontal columns show the percentage of funds that stayed in Q1 or moved to Q2, Q3 and Q4 over the following period.

The shifts over the five-year period are less pronounced but still notable. In particular, whereas historically only 1% of top-quartile funds would drop from the top two quartiles to the bottom from one quarter to the next, the next exhibit shows 8% of funds made such a drop in the first quarter of 2020. Conversely, bottom-quartile dwellers increased their movements to the top quartiles from a 1% historical rate to 13%.

Results were even more dramatic in the short-term bond category, which was rocked by a flight to safety and retreat from lower-quality corporate credits in the first quarter of 2020. In addition, seemingly high-quality structured products, such as certain asset-backed securities popular with short-term bond funds, were also hit hard. 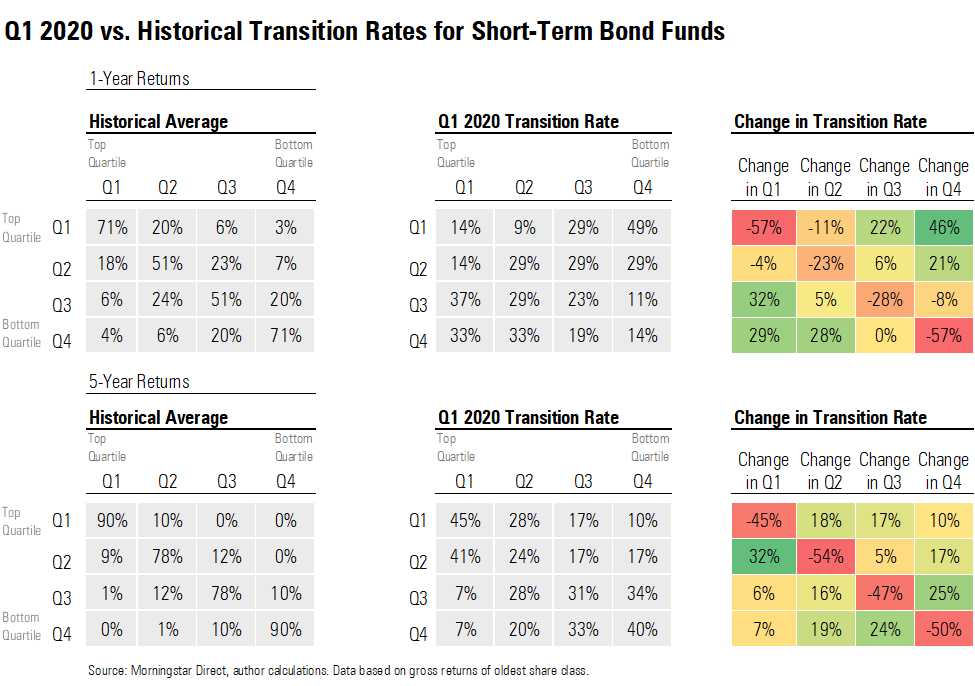 It’s worth noting that U.S. large-growth funds were something of an exception to the pattern, escaping the extreme effects of performance reversal seen in so many other categories. This seems due in part to the predominance in growth-manager portfolios of firms like Netflix NFLX and Amazon.com AMZN, which fueled good performance ranking of managers who held them and which have continued to thrive in the face of the pandemic.

How to Interpret Ranking Shifts: Don’t Just React, Reassess How should you react if a fund you own has undergone a dramatic change in its rankings?

Keep in mind, first of all, that performance of the markets in early 2020 was highly anomalous, and extreme fund results are an unsurprising outcome. One common reason for a large shift is positioning significantly at odds with the typical peers, whether in terms of sector concentrations, credit quality, or broad asset allocation. While heavily risk-on positions tended to have exaggeratedly negative effects, the reverse was also true; more-defensive funds, or those holding cash reserves, may have plodded along for a number of years but suddenly looked golden relative to peers in the wake of the downside volatility. Such differences can be magnified in the case of a category where performance typically runs in a narrow band, as is the case with short-term bonds.

The key question to ask in such a situation is: Has this fund performed within the range of expectations? For example, if a fixed-income fund saw its relative--and perhaps even absolute--returns drop steeply because of large allocations to lower-rated corporate credit securities, did the fund not disclose clearly its level of higher-risk exposure? If, however, the investment thesis for the fund was to take advantage of management’s expertise in lower-rated credits, and the manager has continued to invest in that fashion, then recent performance reversal should not be a reason to bail.

Let’s conclude by looking at a couple of examples to make this intuition more concrete. Continuing from the previous theme of credit exposure, the $5.7 billion Lord Abbett High Yield LAHYX shows up as a prime example. Over the past decade, the fund’s sizable allocation to CCC rated bonds has boosted it relative to peers, but that same exposure led it to lose 23.9% during the peak-to-trough downturn from Feb. 19 to March 23, 2020. That caused its one-year rank to drop to the 86th percentile from 17th and its five-year rank to 47th percentile from seventh.

We can see the opposite trend with Silver-rated Ariel International AINIX. The fund has ranked in the bottom quintile in three of the past four calendar years--owing to both some stock-picking issues and manager Rupal Bhansali’s propensity to hold cash--leading it to enter 2020 in the bottom quartile for the trailing one-, three-, and five-year periods. Presumably, investors purchased the fund aware of the fund’s defensive tendencies, as well as Bhansali’s strong long-term track record across two firms. And they were rewarded in the first quarter, when the fund’s losses, while still large on an absolute basis, were substantially milder than those of the foreign large-blend Morningstar Category. As a result, its category rank launched into the top quartile over the trailing one-, three-, and five-year periods.

Finally, let’s look at a case of a fund whose ranking drop was a bit of a surprise. Silver-rated Artisan International ARTKX has historically showed its mettle during downturns, and it came into 2020 with about 15% of the portfolio in cash. Even though lead manager David Samra had put some of that cash to work by March, investors could rightly have expected the fund to hold up well during the sell-off. Instead, however, the fund’s loss of 38% during the peak-to-trough period was 5 percentage points worse than the foreign large-blend Morningstar Category average, driven significantly by the fund’s overweights to financials and communications services. The fund’s one-year category ranking dropped to bottom-quartile from top-quartile as a result. The drop in its five-year ranking was less severe but still went to third from first quartile.