The first quarter upended the global economy and financial markets. Along with that, some mutual funds saw drastic changes in fortunes during the market turmoil, with their Morningstar Category rankings rising or falling sharply.

For the most part, even in chaotic markets like those in late February and March, how a fund ranks doesn’t change much from quarter to quarter. In this article, we screen for U.S. and international stock funds that made outsize moves and highlight those that made the most significant jumps of four quintile ranks from the start of the year.

(This updates our March story when we looked at the first leg of the downdraft, from the U.S. market’s peak to trough from February to March.)

To whittle down the list, we screened for funds that have three-year track records and assets of at least $100 million. That left us with 877 international equity funds and 1,603 U.S. equity funds. To measure performance, we used the track records of the funds’ oldest share class. 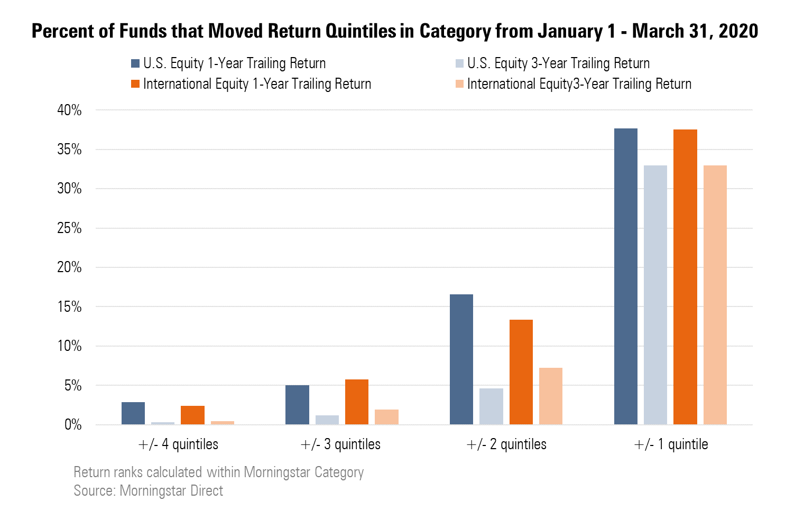 For three-year track records, eight U.S. and international equity funds moved four quintiles--going from the top 20% in their category to the worse 20% or vice versa. 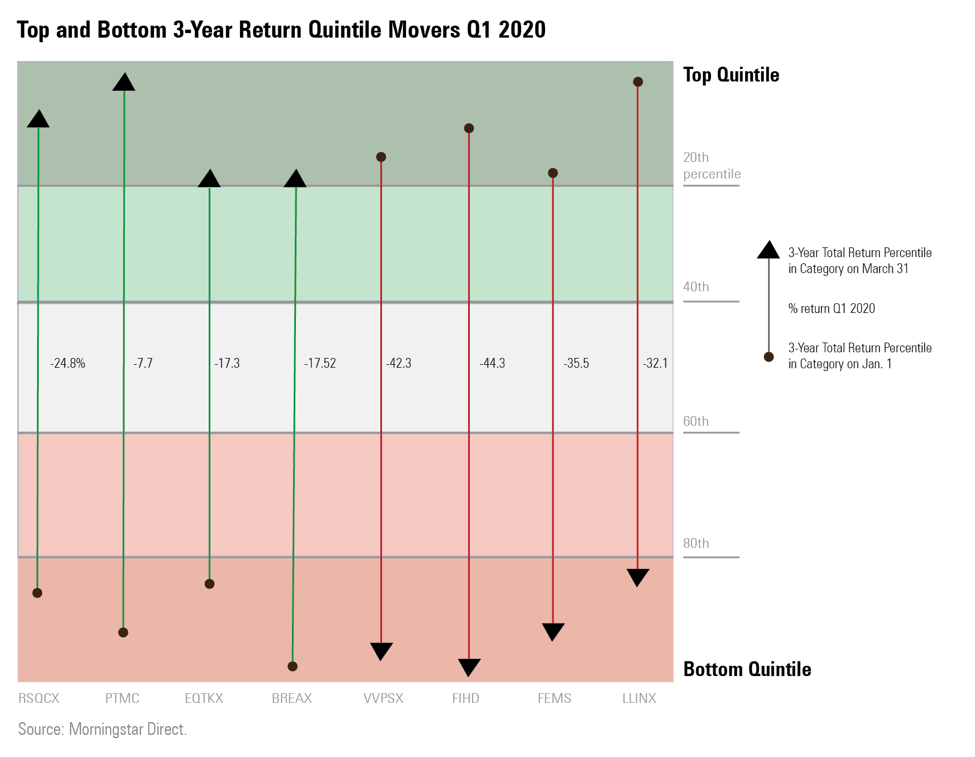 Royce Special Equity (RSQCX), which has a Morningstar Analyst Rating of Neutral, was ranked 85th in the small-value Morningstar Category at the start of the year. Morningstar analyst Tony Thomas noted the fund had underperformed in the bull market relative to its peers. During the bear market, it likely managed the downturn well in part because of the 13% cash position it held as of January.

Royce Special Equity lost only 25.8% in the first quarter, well above the average small-value loss of near 40%. The fund’s three-year return of negative 7.1% puts it in the 10th percentile of the small-value category.

In the large-value category, Shelton Core Value Fund (EQTKX) also held a large 20.4% cash stake, which helped mitigate losses during the quarter. The fund’s three-year return of 0.5% puts it in the 19th percentile of all large-value funds.

Vulcan Value Partners Small Cap (VVPSX) took an outsize loss of 42.3% for the quarter and went to the 94th percentile from the 15th in the small-blend category. As of the end of March, the fund--which follows a concentrated portfolio strategy, holding just 25 stocks--had 21% of its assets in real-estate-related stocks, among the hardest-hit parts of the stock market during the downturn.

Among international equity funds, Neutral-rated BlackRock International Dividend (BREAX) moved to the 19th percentile from the 93rd in the foreign large-blend category. Morningstar director of equity strategies Dan Culloton noted that the fund may have weathered the downturn better because of its focus on higher-quality stocks--stocks with Morningstar Economic Moat Ratings of wide accounted for 52% of the portfolio in January.

Shifting to one-year returns, 46 U.S. equity funds moved four quintiles. Silver-rated Alger Small Cap Focus (AOFCX) lost only 11.8% in the downturn and rose to eighth percentile in the category from the 85th percentile. Tony Thomas, Morningstar senior analyst, points to the fund’s 43% weight in healthcare stocks as one of the reasons it outperformed peers in the first quarter, along with the manager’s focus on higher-quality names and a cash cushion prior to the sell-off.

Gold-rated American Funds American Mutual (RMFAX) is one of the largest funds in the large-value category. In his latest report on this fund, senior analyst Alec Lucas noted that since the fund's 1950 inception, it has beaten the S&P 500 in all 15 stock market declines of 15% or more without dividends reinvested. That has remained true so far in 2020--the S&P 500 lost 19.6%, while the fund lost only 18.4% in the first quarter.

Invesco Small Cap Value (VSMCX) took a large loss due to its allocations in oil stocks and senior living companies and fell to the last quintile in the small-value category, according to a note published by Morningstar analyst Nicholas Goralka.

Among international equity funds, two low-volatility funds shot to the top of their categories during the quarter from the fifth quintile.

IShares Edge MSCI Min Vol EAFE ETF (EFAV) trailed most other funds in the foreign large-blend category as of January but lost only 16.4% in the first quarter, well above the category’s average 24.4% decline. Vanguard Global Minimum Volatility (VMVFX) performed well and now ranks in the sixth percentile of world small/mid-stock funds with a one-year return of negative 12.10%.

Ariel International Investor (AINTX) ranked in the last percentile of all foreign large-blend funds in January but held up well in the downturn, and its one-year return now puts it in the second percentile of all foreign large-blend funds. Morningstar analyst Connor Young mentioned the fund doesn’t do as well in rising markets but held up in the first quarter because of its overweighing within the defensive telecommunications industry.