Small caps make up a tiny minority of the total market capitalization of the U.S. stock market. Depending on the index family in question, they account for anywhere from 3% to 12% of the total value of U.S. stocks. Accordingly, they tend to play a bit part in most investors’ portfolios. In this article, I will look at the case for indexing within U.S. small caps and highlight some of our top-rated funds offering indexed exposure to this segment of the market.

The Case for Indexing U.S. Small Caps Small caps are an area of the market where active managers have generally been more successful--certainly relative to their large-cap counterparts. According to Morningstar’s year-end 2019 U.S. Active/Passive Barometer, 35.5% of actively managed U.S. small-blend funds outperformed their average passive peer over the 20 years through December 2019. Just 14.3% of actively managed U.S. large-blend funds that were around two decades ago managed to survive and outperform their average passive peer over this same span. While small-cap managers fared better than stock-pickers operating in the land of large caps, a 35.5% long-term success rate isn’t exactly something to write home about. There’s a strong case to be made for indexing in the U.S. small-cap space.

What explains passive funds’ impressive track record in the small-cap segment? There are several factors at play. Even as you go down the market-cap spectrum, markets tend to be efficient, especially over the long term. No different than large caps, it is difficult for investors to gain and maintain an informational advantage in the small-cap space, especially as the cost of acquiring and processing publicly available information has never been lower. Stock prices tend to incorporate this information quickly, making it difficult to capitalize on mispricings when they do arise. Index funds piggyback on the valuation work done by their active peers. They absorb market participants’ collective opinions of the value of the stocks they own. And they have a significant cost advantage over their active peers, given that they’re free-riding on all their hard work. Together, these factors explain why market-cap-weighted index funds have been tough competition for active managers over the long term--with the U.S. small-cap space being no exception.

How Small is Small? There are several indexes that are used as barometers of small-cap stocks. But not all small-cap indexes are created equal. There are some important differences between them which are rooted in the specifics of their methodologies.

Index providers such as CRSP, S&P, Russell, and Dow Jones screen their universe along dimensions such as market cap, free float, and liquidity for inclusion in their small-cap indexes. For example, CRSP screens U.S. stocks for a minimum market cap of $15 million and requires at least 12.5% of shares outstanding be traded publicly. By comparison, S&P requires qualifying U.S. small-cap stocks to have a market capitalization between $600 million and $2.4 billion when added. Dow Jones requires at least 10% of shares outstanding be publicly traded. New constituents must also pass a minimum trading volume threshold. Russell requires 5% of a stock’s shares to float publicly for it to be included in the index. Most other index funds require at least double that percentage.

The nuanced differences between these indexes extend to their regular maintenance and rebalancing. For example, the CRSP U.S. Small Cap Index rebalances on a quarterly basis but spreads its trades out over a five-day period to help reduce trading costs. Meanwhile, other indexes rebalance on a single day. The Dow Jones U.S. Small-Cap Index rebalances on a quarterly basis, in sync with its parent index, the Dow Jones US Total Stock Market Index. Russell reconstitutes annually in June while the S&P SmallCap 600 Index’s reconstitution is at the discretion of the committee. However, it rebalances quarterly on the third Friday in the last month of the quarter. As excessive trading can increase explicit and implicit costs to the end investor in funds tracking these benchmarks, features intended to mitigate these costs are a plus.

CRSP applies buffers that are more generous than other index families. These buffers are designed to limit unnecessary turnover. When the index moves positions into or out of the portfolio, it breaks the trade in half to smooth the transition between size segments and reduce transaction costs. CRSP also spreads its regular rebalances over the course of five trading days to further mitigate transaction costs. Similar to CRSP, the Dow Jones U.S. SmallCap Total Stock Market Index uses generous buffer rules to mitigate turnover, which should help reduce transaction costs. When it reconstitutes each year in September, current holdings that rank between the largest 601st and 3,000th by market cap are included first to reduce unnecessary turnover. Buffering with small caps is especially important as they tend to be more costly to trade relative to larger companies. Thus, excessive trading can have greater market impact costs compared with large caps, which eat into investor returns. [1]

How To Index with U.S. Small Caps? There are five Morningstar Medalists among exchange-traded funds in the small-blend Morningstar Category that offer broad, market-cap-weighted exposure to U.S. small caps. Here, I’ll take a closer look at these five category standouts and illuminate the nuanced differences between the small-cap indexes that underpin them.

Vanguard Small-Cap ETF (VB) sports a Morningstar Analyst Rating of Gold. It tracks the CRSP U.S. Small Cap Index, which applies a percent-of-cumulative market-cap breakpoint approach to defining the small-cap universe. The index targets stocks in the smallest 85% to 98% of the market as ranked by market capitalization from the CRSP US Total Market Index and calls them small caps. The fund currently holds about 1,350 stocks. Compared with peers, the CRSP indexes take extra steps to reduce turnover and the costs associated with it. These measures include applying generous buffering rules, as discussed above. It also spreads trades across five days to mitigate market impact costs. Like all market-cap-weighted index trackers, it will bear the brunt of a bear market, but its quality tilt relative to Russell 2000 Index trackers, as shown in Exhibit 2, should serve as a defensive mechanism and blunt some impact of a market downturn. This quality tilt is a result of its higher market-cap bias relative to the Russell 2000 Index.

Gold-rated iShares Core S&P Small-Cap ETF (IJR) tracks the market-cap-weighted S&P SmallCap 600 Index, which represents the 600 smallest stocks from the S&P 1500 index. This index applies a count-based approach and is maintained by a committee. It doesn’t follow a set of mechanical rules or a regular reconstitution schedule, which favors flexibility over transparency, but this is not a major drawback. Of the five Morningstar Medalists discussed here, this fund has the greatest quality tilt, as shown in Exhibit 3. This owes to the fact that stocks must have positive earnings over the most recent quarter and past year to be eligible for inclusion--a higher bar than peers. This filters out some of the most speculative small-cap stocks. This should reduce risk and enhance returns. The primary drawback of this approach is that it does not fully represent the investable universe of small-cap stocks. Although the index reconstitutes quarterly, the committee has discretion to add or remove names as they see fit. Also, this screen only applies to new additions and there are no measures in place aimed at mitigating transaction costs.

Gold-rated Schwab US Small-Cap ETF (SCHA) tracks the market-cap-weighted Dow Jones U.S. SmallCap Total Stock Market Index, which excludes the largest 750 stocks and targets the next largest 1,750 from the Dow Jones U.S. Broad Stock Market Index. Unlike IJR, the fund represents the investable small-cap opportunity set more comprehensively. It also takes some prudent steps to tamp down turnover. During reconstitution, current holdings that rank between the largest 601st and 3,000th by market cap are included first to reduce unnecessary turnover. Its primary drawback compared to peers is a lack of quality screens, so it may hold some speculative names. Despite this, it has a larger market-cap profile than the Russell 2000 Index and has at times shown a quality bias compared with that index, as shown in Exhibit 4.

Bronze-rated iShares Russell 2000 ETF (IWM) and Bronze-rated Vanguard Russell 2000 ETF (VTWO) track the Russell 2000 Index. This index applies a count-based approach and mechanically selects its holdings from the Russell 3000E Index. It picks the 1,001st to 3,000th largest U.S. stocks and weights them by market capitalization. These funds reach further down the market-cap ladder than their peers and include microcap stocks, as defined by Russell, which helps explain their weak quality tilt. The Russell 2000 Index has a smaller float requirement, which gives it greater exposure to thinly traded stocks and does not have any buffers to mitigate unnecessary turnover along its lower market-cap bound, where transaction costs tend to be the greatest. So, if a stock in the index falls even slightly below the size of the 3,000th largest U.S. stock, it gets removed from the index, thus resulting in potentially costly turnover.

The Russell 2000 Index has underperformed peers such as the CRSP U.S. Small Cap Index, S&P SmallCap 600 Index, and Dow Jones US Total Stock Market Small Cap Index by anywhere from 0.36% to 1.16% over the trailing 10 years ending March 2020. Exposure to the quality factor helps explain much of this performance spread. Research from AQR [2] indicates that high-quality small stocks outperform lower-quality small caps.

Despite the above-mentioned drawbacks of the Russell 2000 Index, IWM and VTWO’s broad diversification and cost advantage relative to active funds give them enough of an edge versus their category peers to earn them their Bronze ratings.

Fit for Purpose The best choice for an investor will likely boil down to goodness of fit within their portfolio. These indexes are all designed to fit like puzzle pieces with other members of the same index family (large caps, mid caps, and so on). Keeping it all in the family is the best way to avoid unintended overlap within your portfolio. 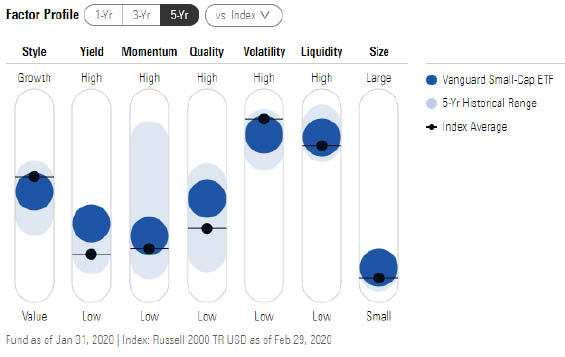 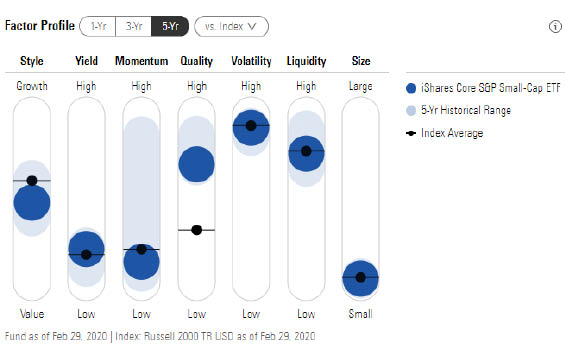 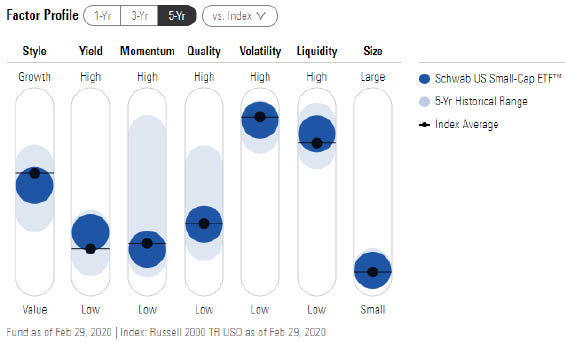 Venkata Sai Uppaluri does not own shares in any of the securities mentioned above. Find out about Morningstar’s editorial policies.