Equity funds focusing on stocks that have historically shown lower levels of volatility seem like they could offer the best of both worlds: the growth potential of stocks with less risk. Investors have apparently been enticed by that potential: These “low-volatility” funds have been increasingly popular in recent years, garnering an estimated $45.3 billion in net inflows over the trailing three years ended Dec. 31, 2019.

But have these funds lived up to their promise lately amid severe market turbulence? To examine that, we analyzed the performance of a subset of low-volatility funds--U.S. large-cap mutual funds and exchange-traded funds--during the recent pullback. The bottom line? They’ve taken some of the edge off, but the results have varied widely: From Feb. 20 through March 31, 2020, the average U.S. large-cap low-volatility fund lost 22.95% versus a 23.48% loss for the S&P 500, with more than 13 percentage points separating the best and worst performers. 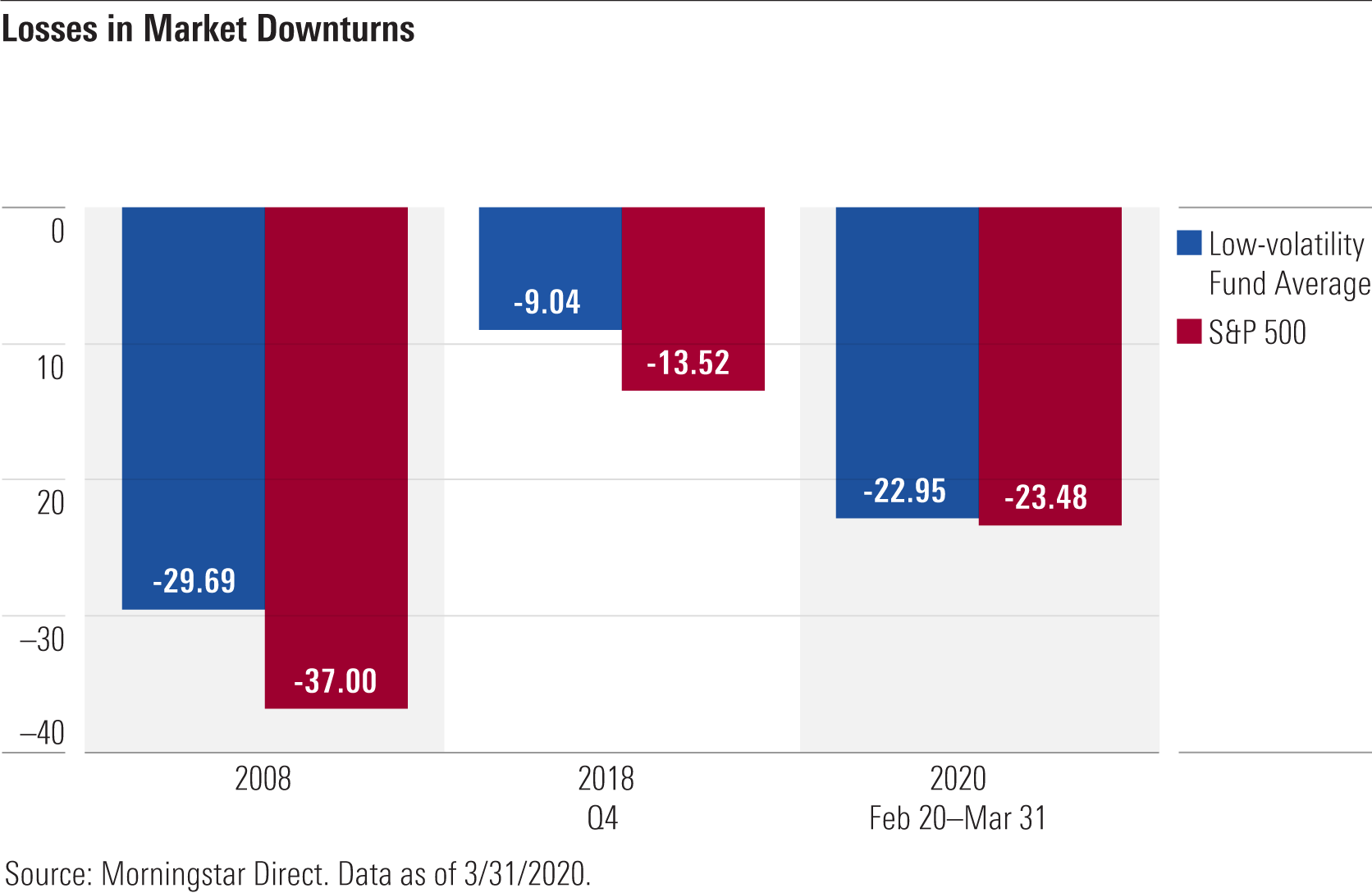 While the best members of the group have performed admirably, the overall results have been pretty disappointing. Indeed, the subset of low-volatility funds focusing on U.S. large-cap stocks fared better in previous downturns. In 2008, for example, they posted an average loss of 29.7%, about 7 percentage points better than the S&P 500. Similarly, they lost about 4.5 percentage points less than the index in the fourth quarter of 2018.

Why have some of these funds faltered in the most recent downturn? For one, the novel coronavirus crash has been exceptionally swift, severe, and widespread. Traditional safe havens such as stocks with higher-than average dividends have dropped as much as or more than the overall market. As a result, funds such as Invesco S&P 500 High Dividend Low Volatility ETF (SPHD) (which lost 29.7% from Feb. 20 through March 31) and Voya U.S. High Dividend Low Volatility (VHDAX) (down 25.4% over the same period) have been particularly hard-hit. Funds with heavier-than-average weightings in energy stocks, financials, and utilities have also suffered. On the flip side, funds that had heavier weightings in technology, healthcare, and consumer defensive stocks fared better, as did those with more exposure to large-cap growth issues.

One standout in the group of 35 low-volatility funds we studied was Invesco U.S. Managed Volatility (USMVX), which lost 10.98% in the period from Feb. 20 through March 31. Those losses are still painful in absolute terms, but much better than those suffered by its peers. IShares Edge MSCI Minimum Volatility USA ETF (USMV)--by far the biggest low-volatility fund, with about $29.5 billion in assets--lost about 1.6 percentage points less than the index during the same period.

Overall, U.S. large-cap low-volatility funds did hold up better than the S&P 500 during the recent pullback, but not as well as they’ve done in the past. On average, the group’s downside-capture ratio (calculated by taking monthly returns during months with negative market returns and dividing it by the benchmark’s return during the same months) has been about 80% over the past three years. During the worst days of the recent downturn, on the other hand, the downside-capture ratio for this subset of funds has been closer to 90%. 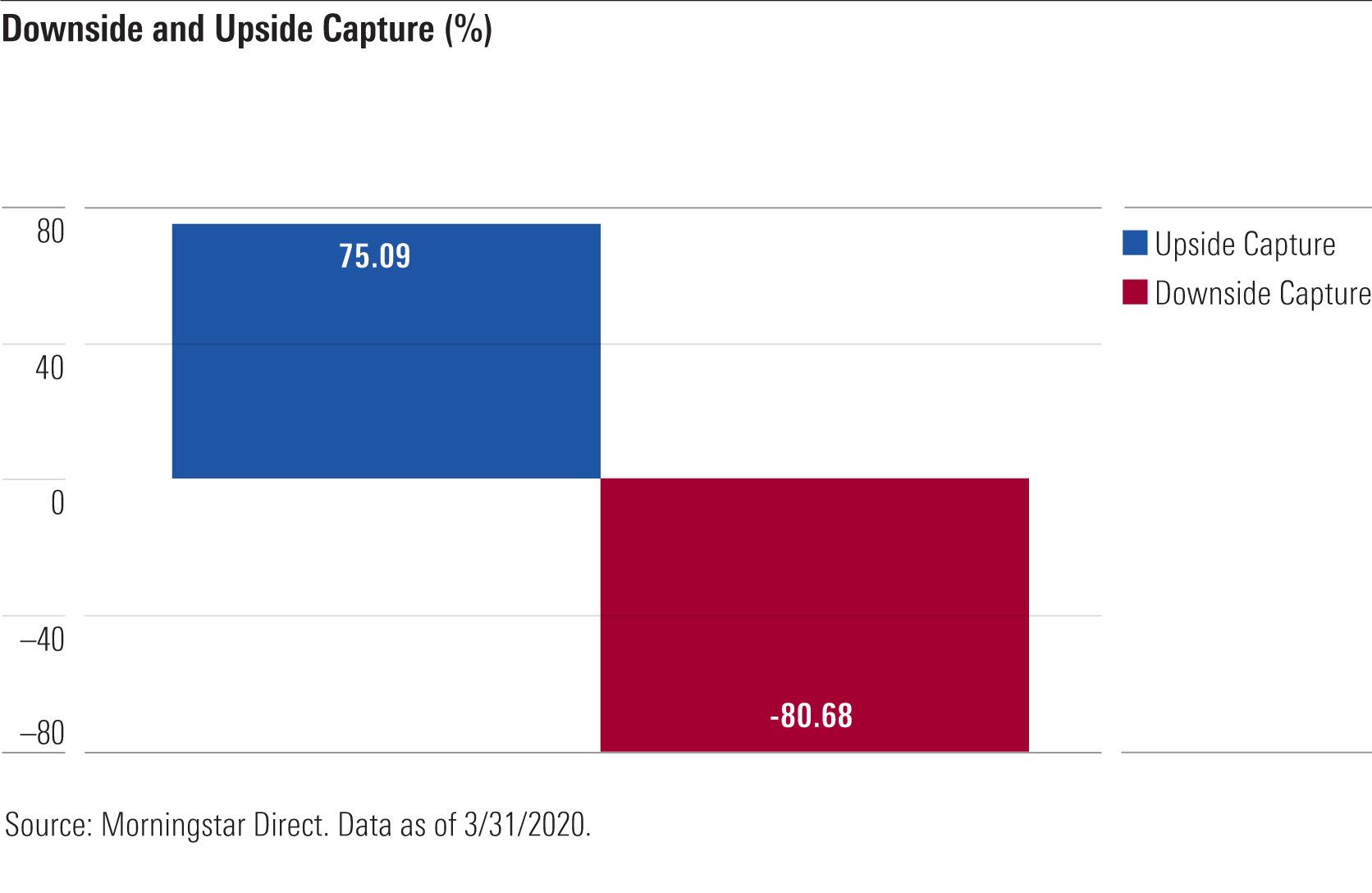 That’s apparently scared away some shareholders, as the majority of low-volatility funds suffered outflows in March. Investors pulled an estimated $2.5 billion in assets from these funds during the month.

The bottom line is that low-volatility funds can only do so much. At the end of the day, they’re still equity funds and will ultimately be driven by whatever happens in the equity markets. Performance during the recent market rout also serves as a helpful reminder that volatility is not equivalent to risk. Low-volatility funds have indeed lived up to their name by delivering less volatility (as measured by standard deviation) than the market index over the trailing three-year period. But lower volatility doesn’t always translate into better performance in market downdrafts.

To truly protect a portfolio against downside volatility, there’s no substitute for asset-class diversification. Despite some liquidity issues and trading disruptions during the recent market chaos, higher-quality bonds have still served a valuable role in buffering losses. As a result, a traditional balanced portfolio combining 60% stocks and 40% bonds would have lost less than half has much as an equity-only portfolio since the market peak on Feb. 20.

Low-volatility equity funds can still fill a role, but it’s key to remember that they’re still equity funds and should count as stock exposure in your portfolio. Investors buying into these funds shouldn’t expect them to provide a significant return advantage--especially in the most turbulent markets.