Executive Summary Funds with higher star ratings (4- and 5-star) outperformed their average peers during the recent sell-off and the rally that preceded it, while lower-rated funds (1- and 2-star) underperformed. Over the full period spanning the rally and sell-off, 5-star funds topped their average peer by about 1.25% per year while 1-star funds lagged by roughly 2% per year. All told, higher-rated funds were about 1.5 times more likely to beat their category average than lower-rated funds over the full period. 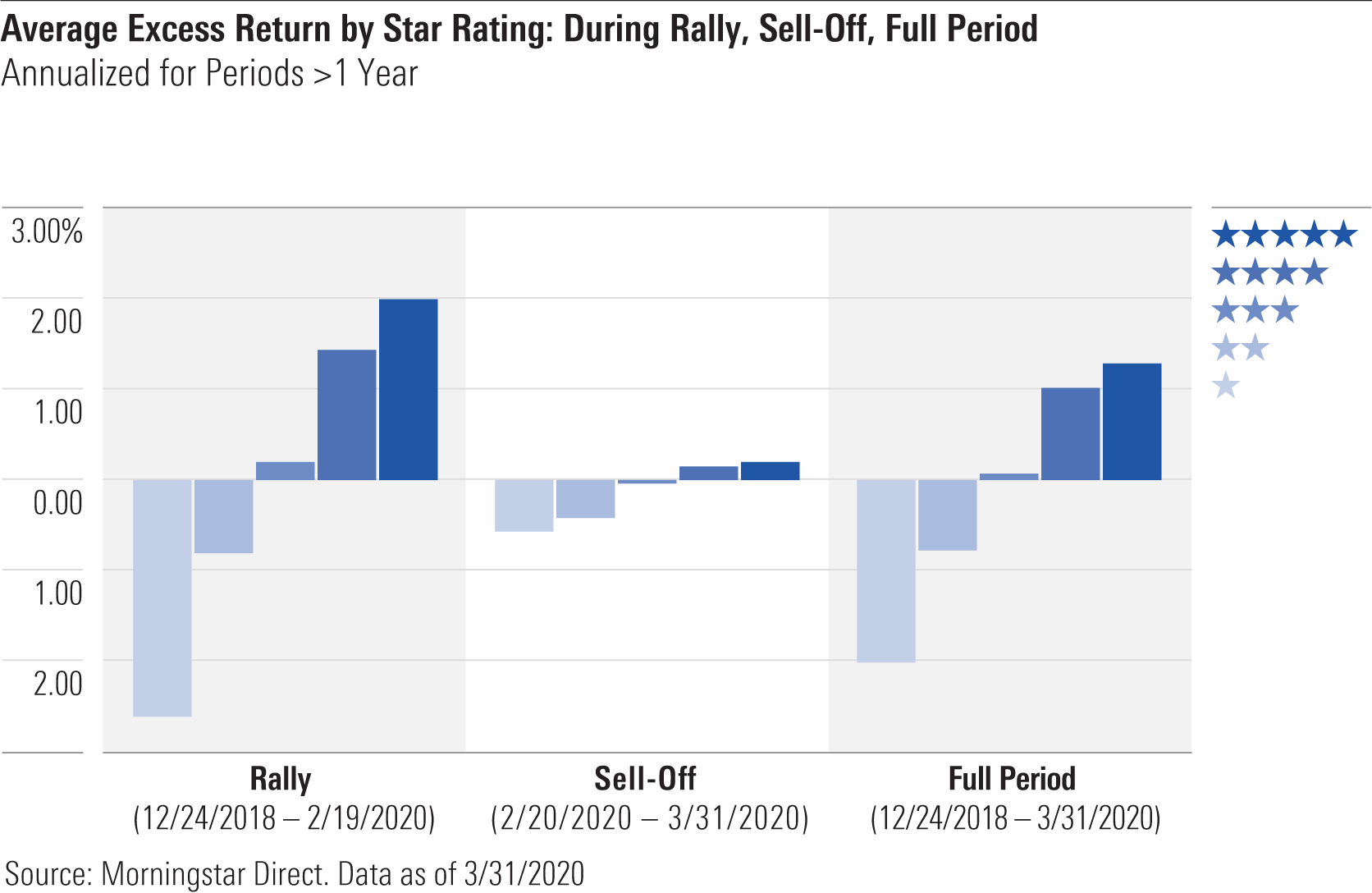 Fee differences explain part of the star rating's success in sorting funds. That is, higher-rated funds tended to be cheaper than lower-rated funds, on average, with those fee differences appearing to accrue to investors' benefit.

These findings are consistent with our analysis of the star rating's longer-term performance, which shows the ratings have tended to point investors toward funds that are likelier to outperform and steer them away from those more likely to fall short.

Study For an explanation of how we conducted this performance analysis, please see the "Notes" section at the end of this article. 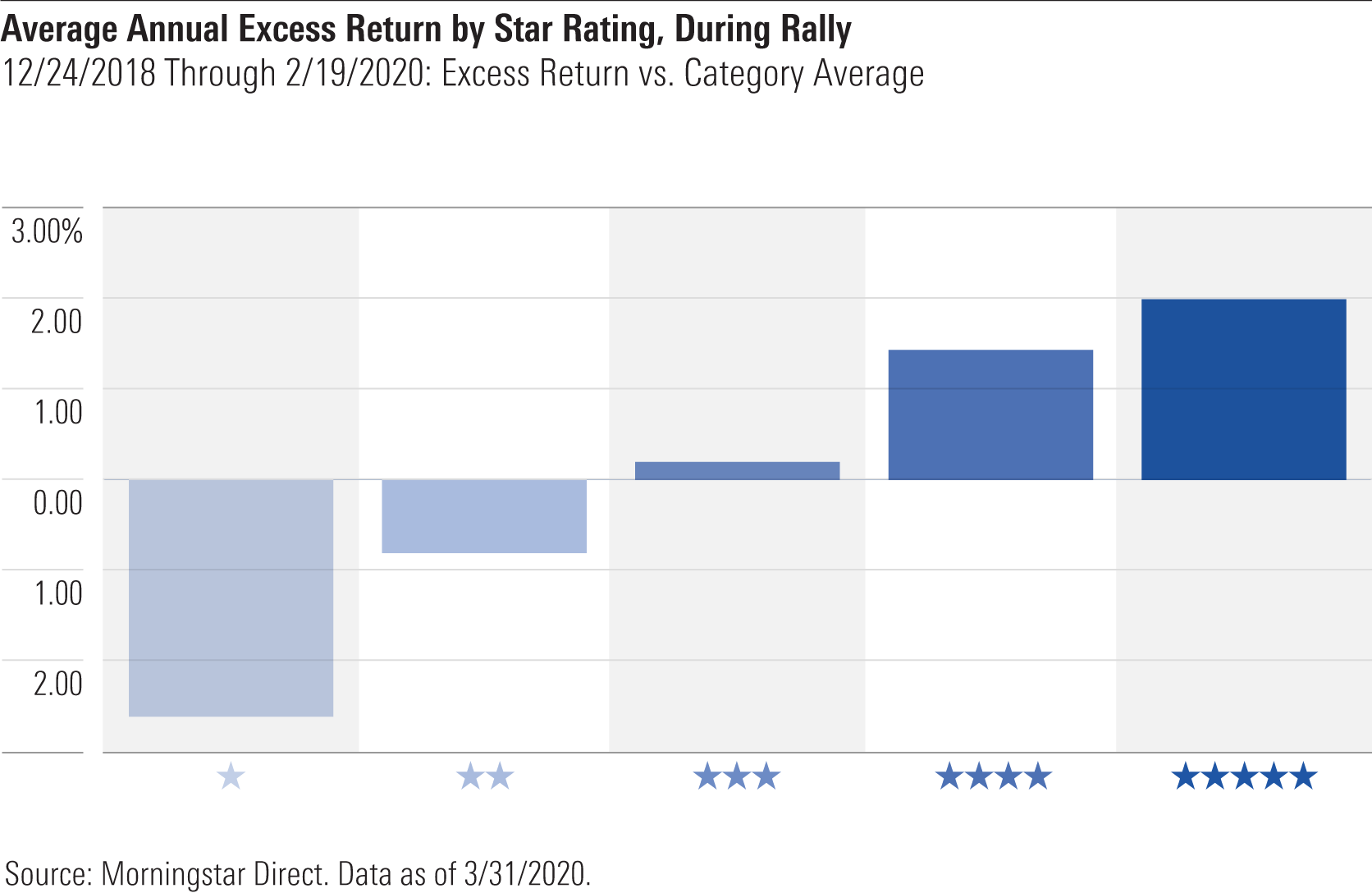 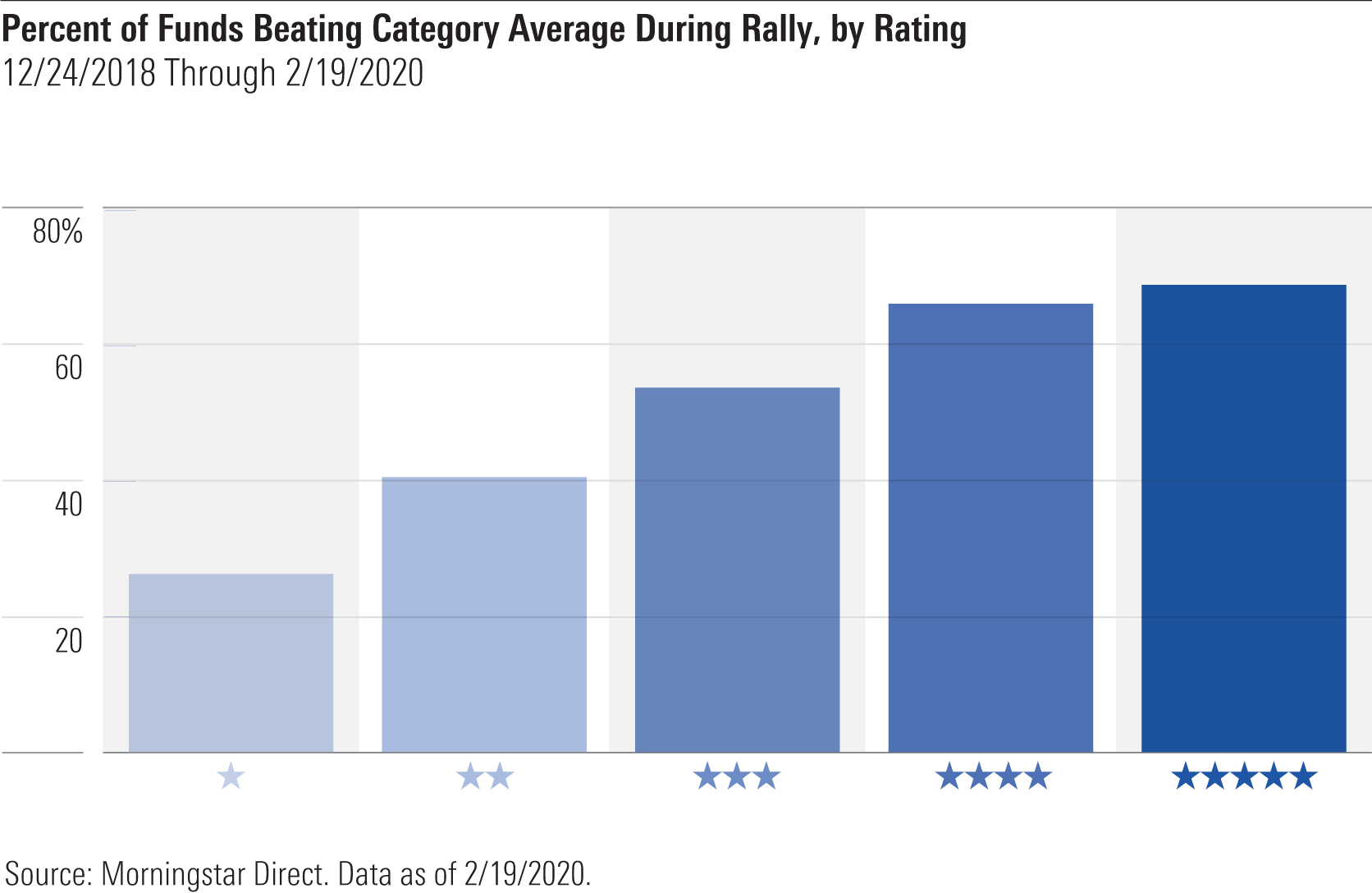 During the sell-off, the average 5-star fund beat its average peer by around 0.13%, while the average 1-star fund lagged by 0.57%. 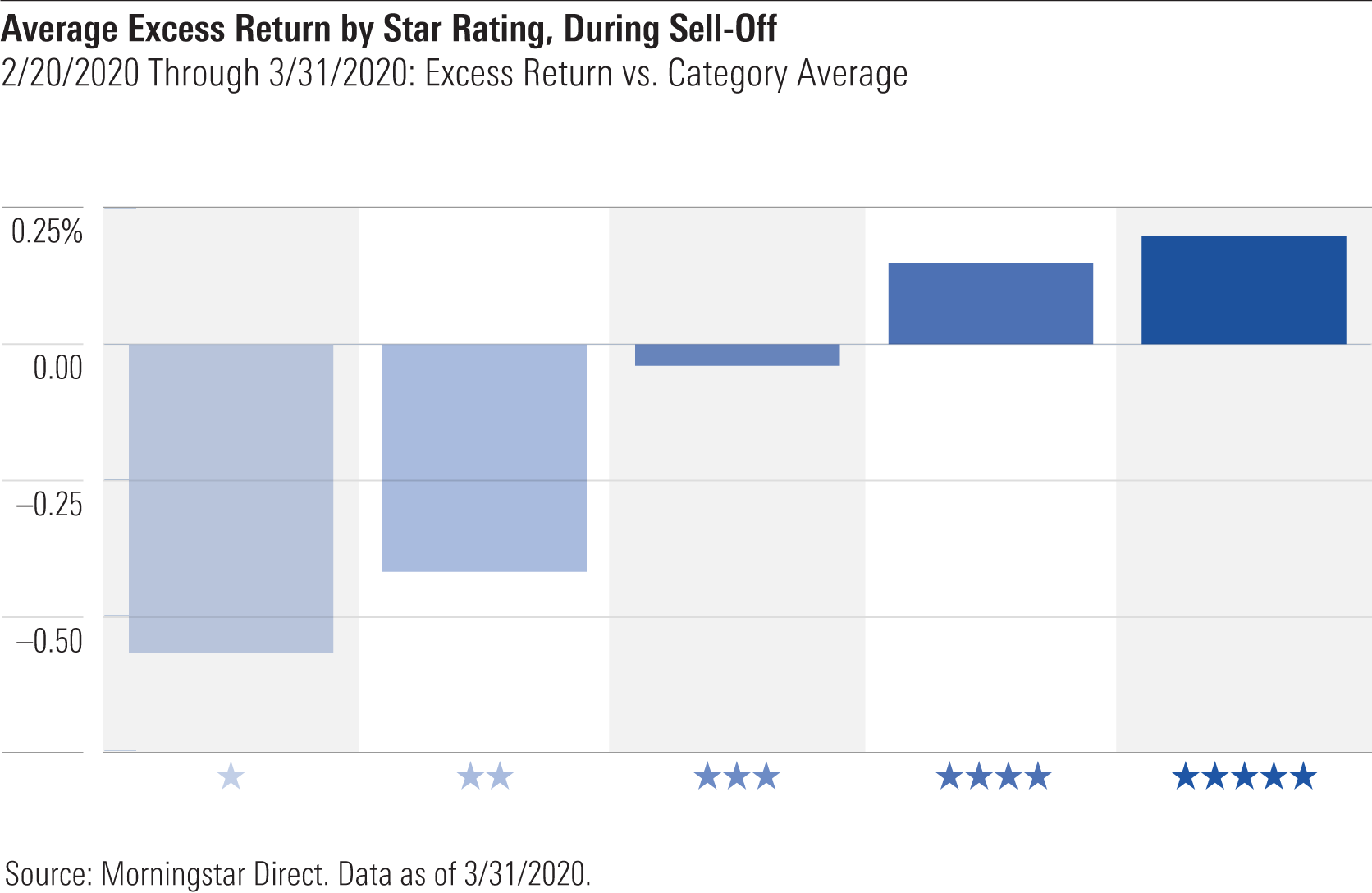 Around 55% of higher-rated funds outperformed their average peer during the sell-off, versus 46% of lower-rated funds, as shown below. 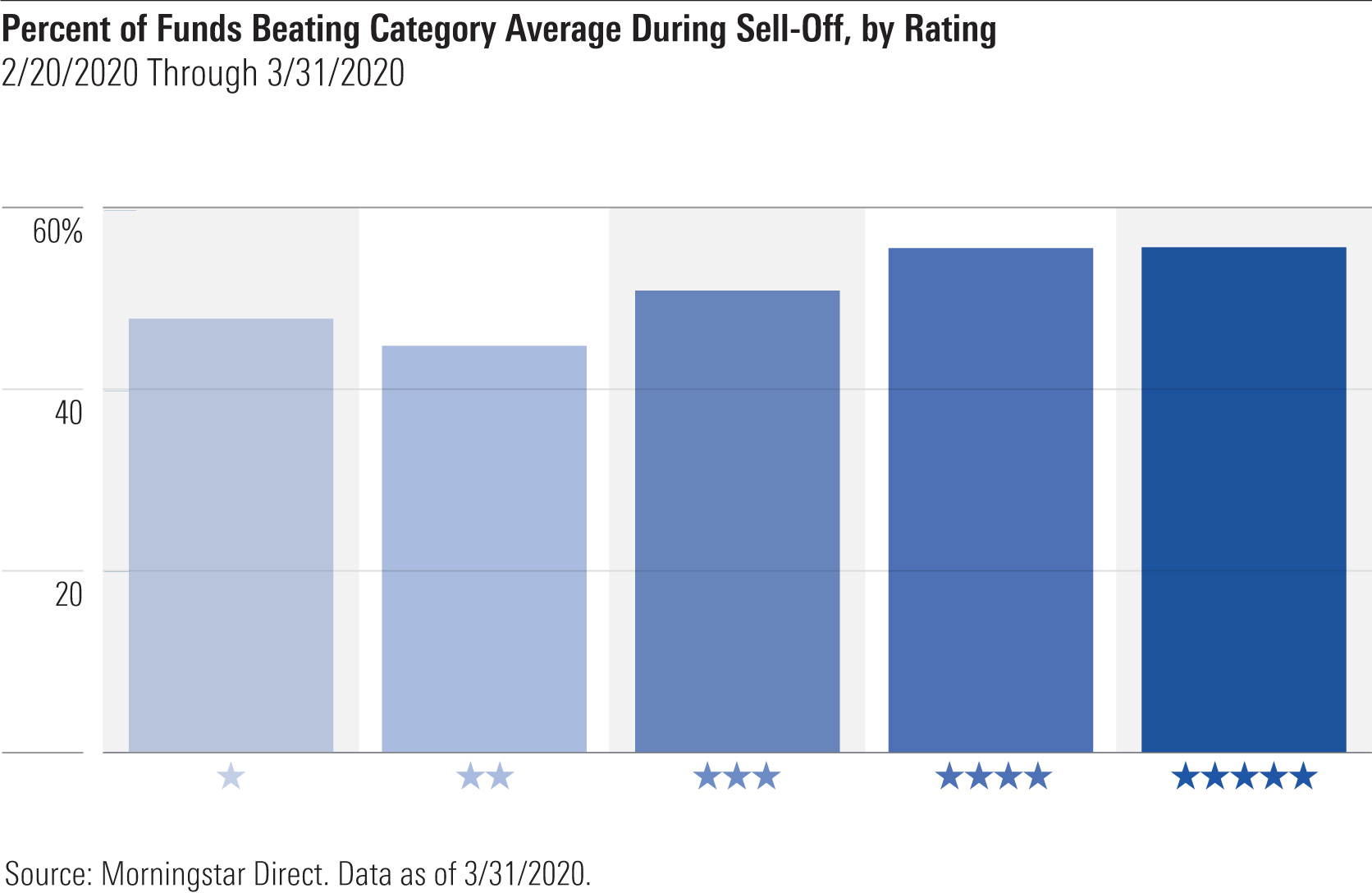 Over the full period, the average 5-star fund beat the category average by nearly 1.25% per year; the average 1-star fund lagged by around 2% per year. 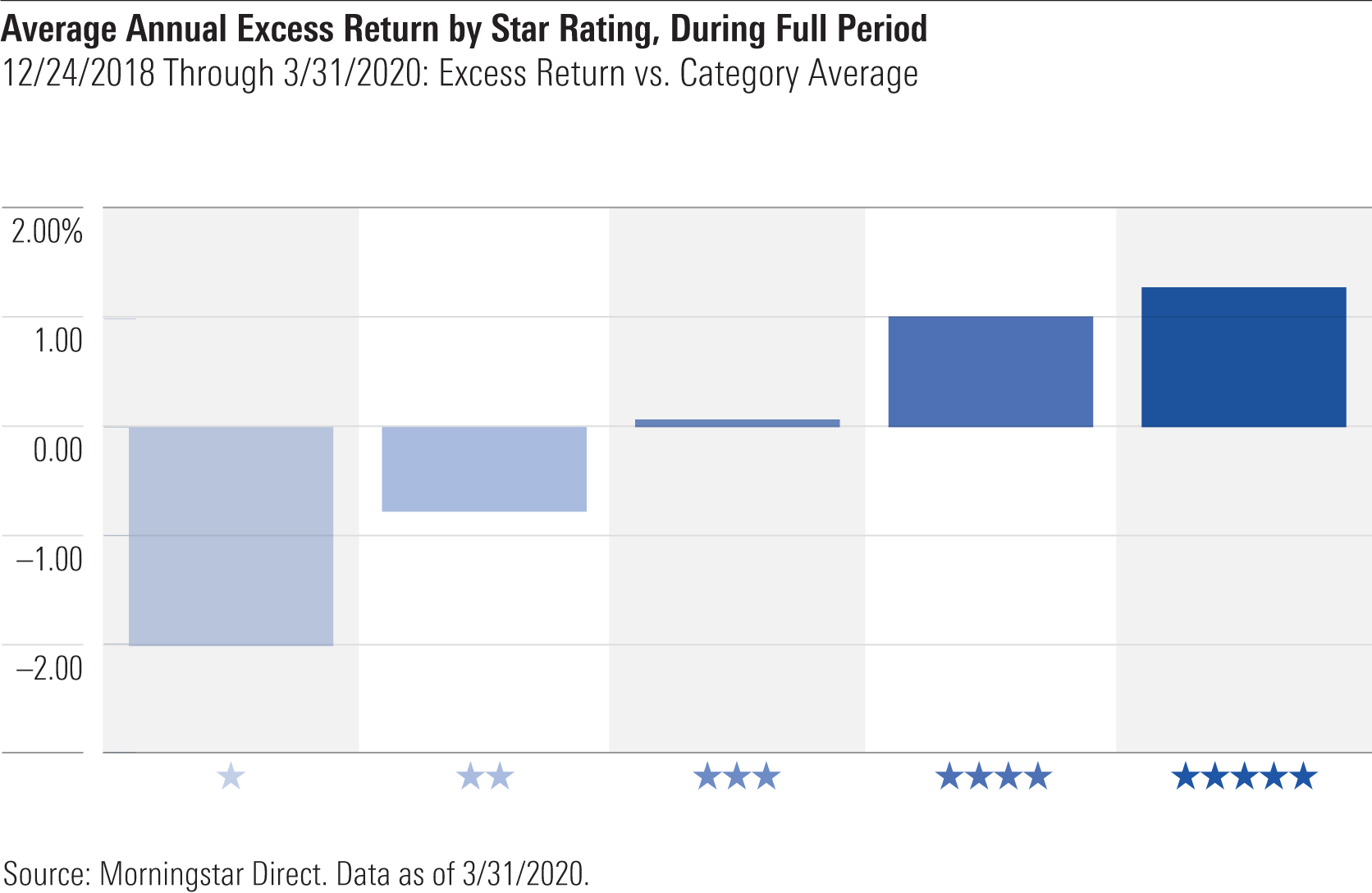 Higher-rated funds outperformed their average peer about 1.5 times as often as lower-rated funds during the full period spanning the rally and sell-off, as shown below. 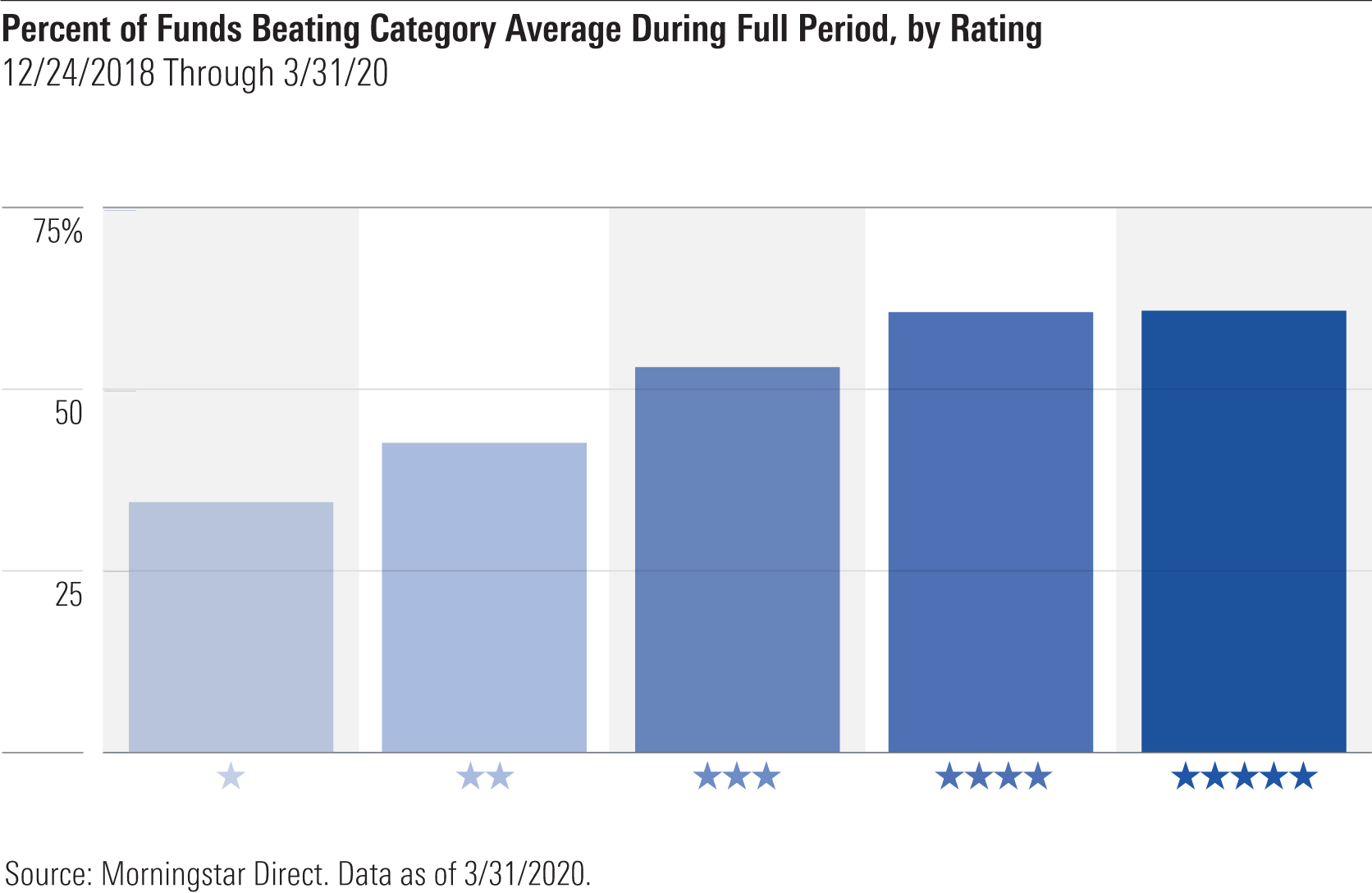 (Note: For further details on how the star rating performed by asset class, see the "Appendix" at the end of this article.)

Last, we did a before/after comparison of funds' star ratings using their starting rating (their ratings as of Nov. 30, 2018, the month-end immediately preceding the beginning of the rally) and ending rating (the most recently available ratings, as of March 31,  2020), as shown below. 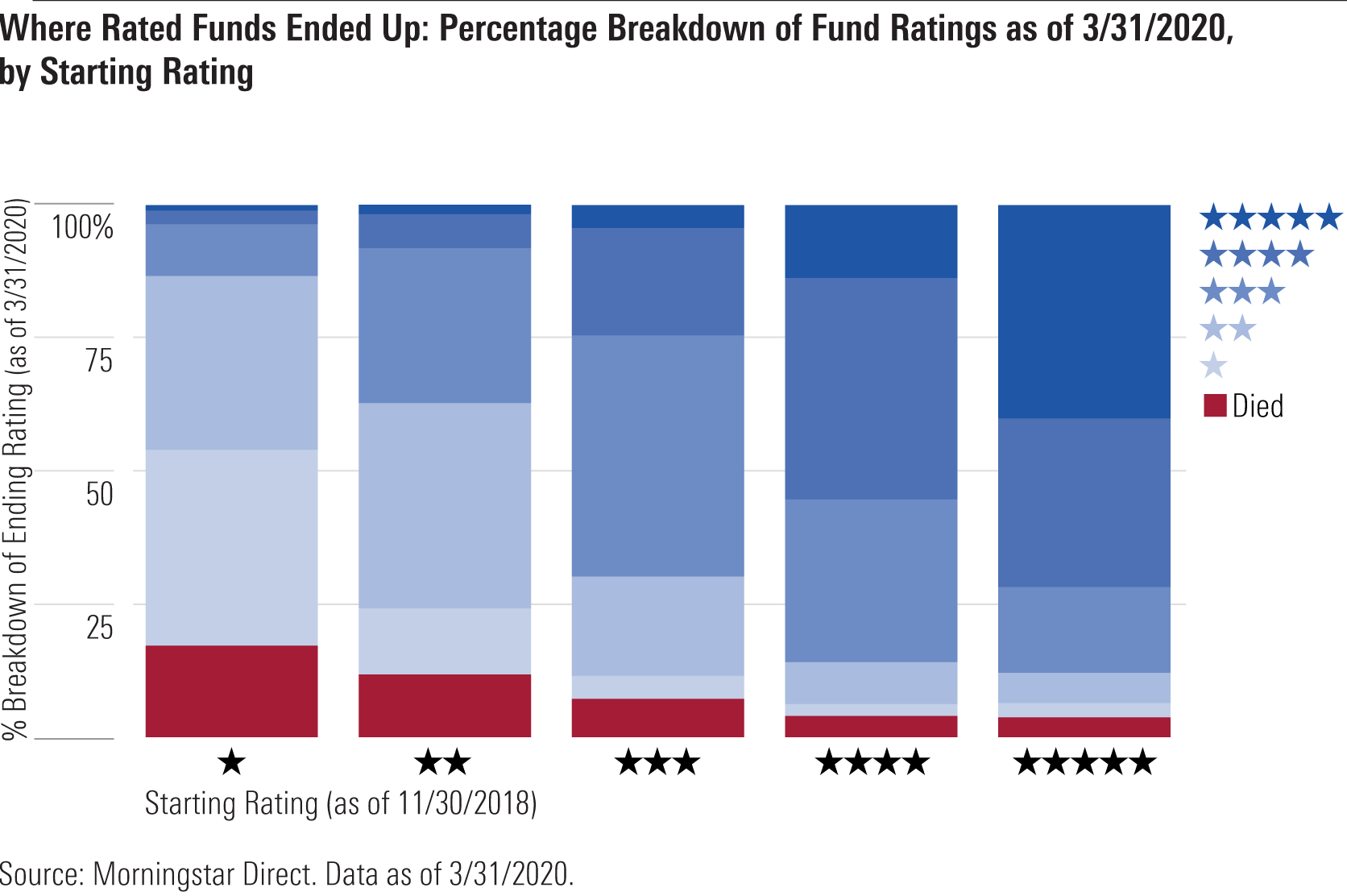 (Compares funds' "overall" star rating as of Nov. 30, 2018, and March 31, 2020; includes all unique funds with ratings as of Nov. 30, 2018, including funds that were subsequently merged or liquidated; for multi-share-class funds with two or more unique ratings across the share class range, we included one representative share class for each rating.)

Star Ratings and Fees We also examined the extent to which fee differences contributed to the star rating's success in sorting funds during the rally, sell-off, and full period. While it's true the star rating doesn't turn on funds' fees, it enters the equation insofar as the rating compares funds based on their risk-adjusted returns after subtracting expenses.

We tallied the number of funds in each Expense Ranking group that had beaten their average peers during the rally, sell-off, and full periods, and compared those success rates against the success rates we'd previously calculated based on star ratings.

Here's how success rates compared between the two methods--star rating and fees (which we refer to as Expense Ranking in the charts that follow)--during the rally period. In summary, cheaper funds were more likely to beat their average peers than expensive funds. We find a similar pattern during the sell-off period, as shown below, with cheaper funds more likely to surpass their category average than pricey funds, though to a smaller degree than during the rally. 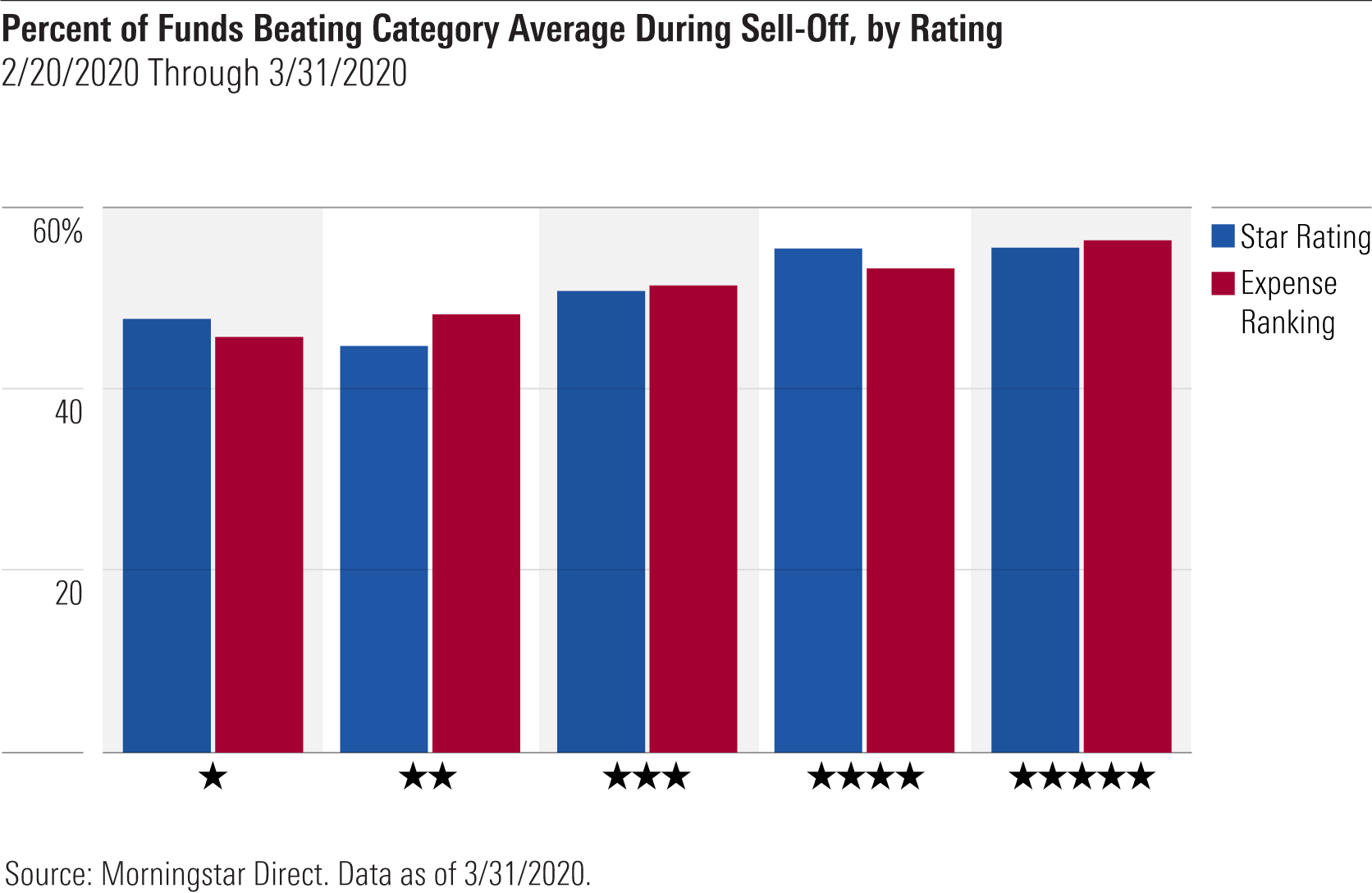 Not surprisingly, we find that cheaper funds succeed more often than expensive funds over the full period as well. 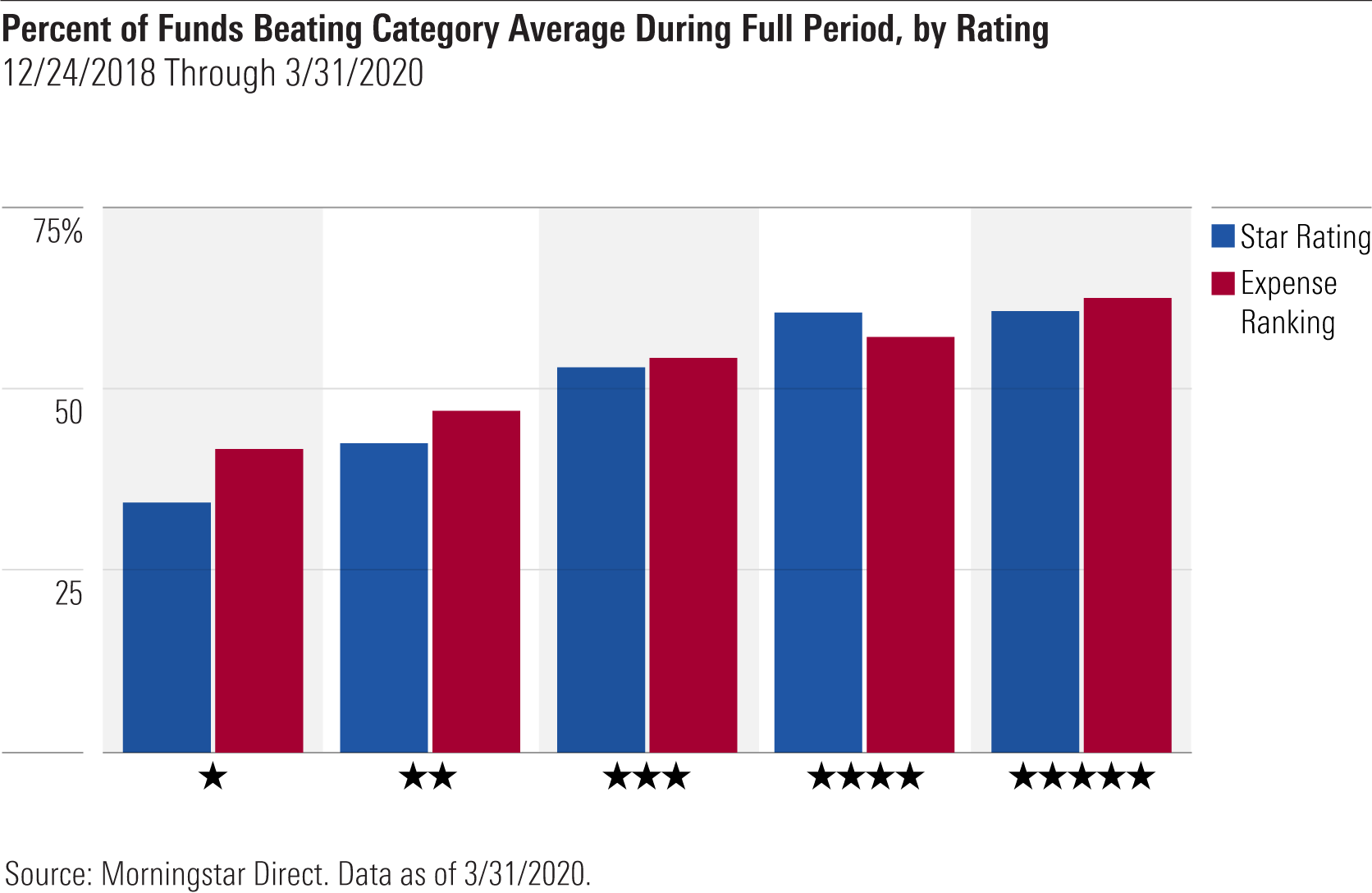 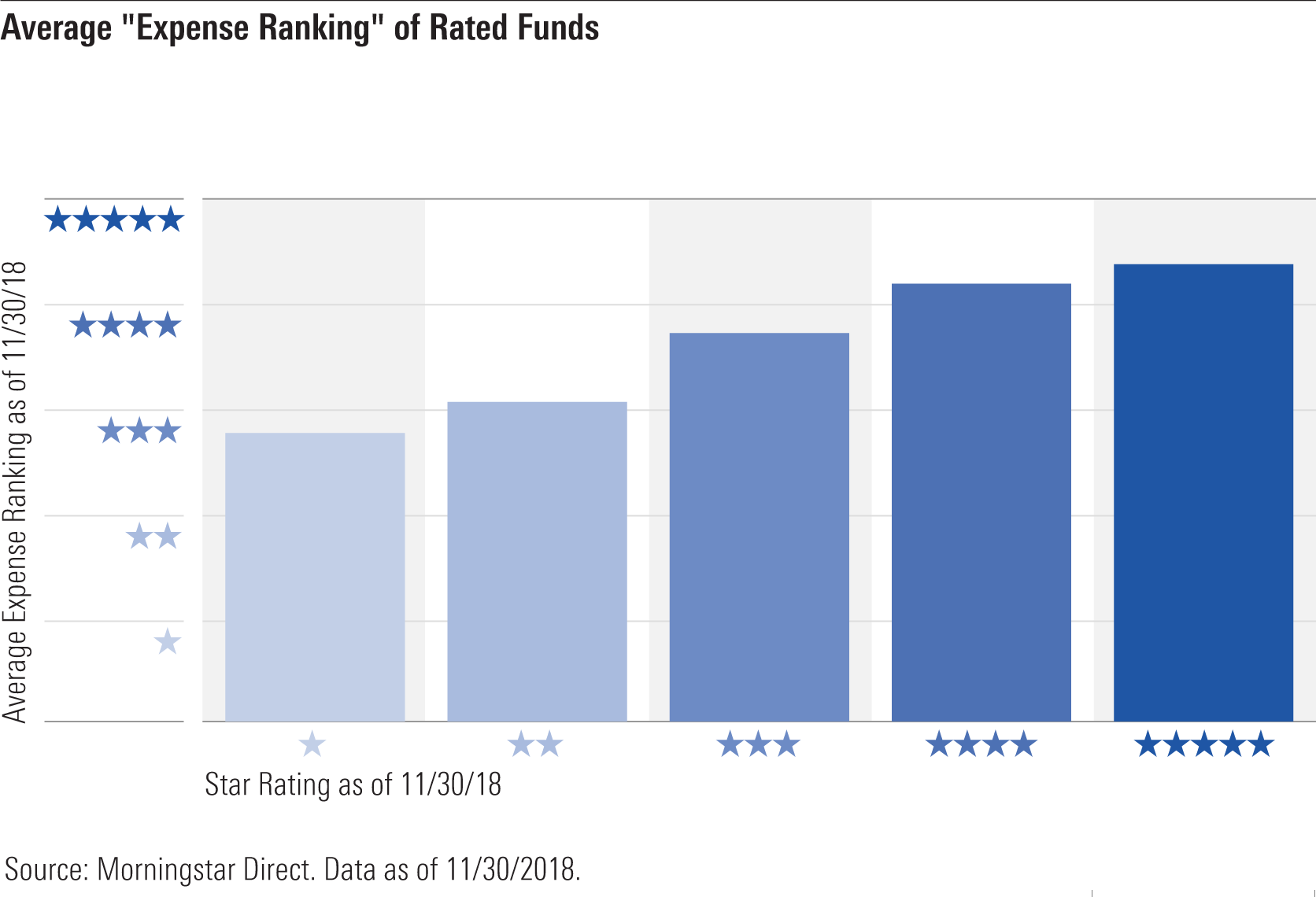 In summary, it appears the star rating points investors toward cheaper funds and away from pricier funds, and that cost difference contributed to the star rating's success in sorting funds over the periods we examined.

Longer-Term Trends We also examined how the star ratings performed over the trailing one-, three-, five-, and 10-year periods ended Jan. 31, 2020, as shown below. 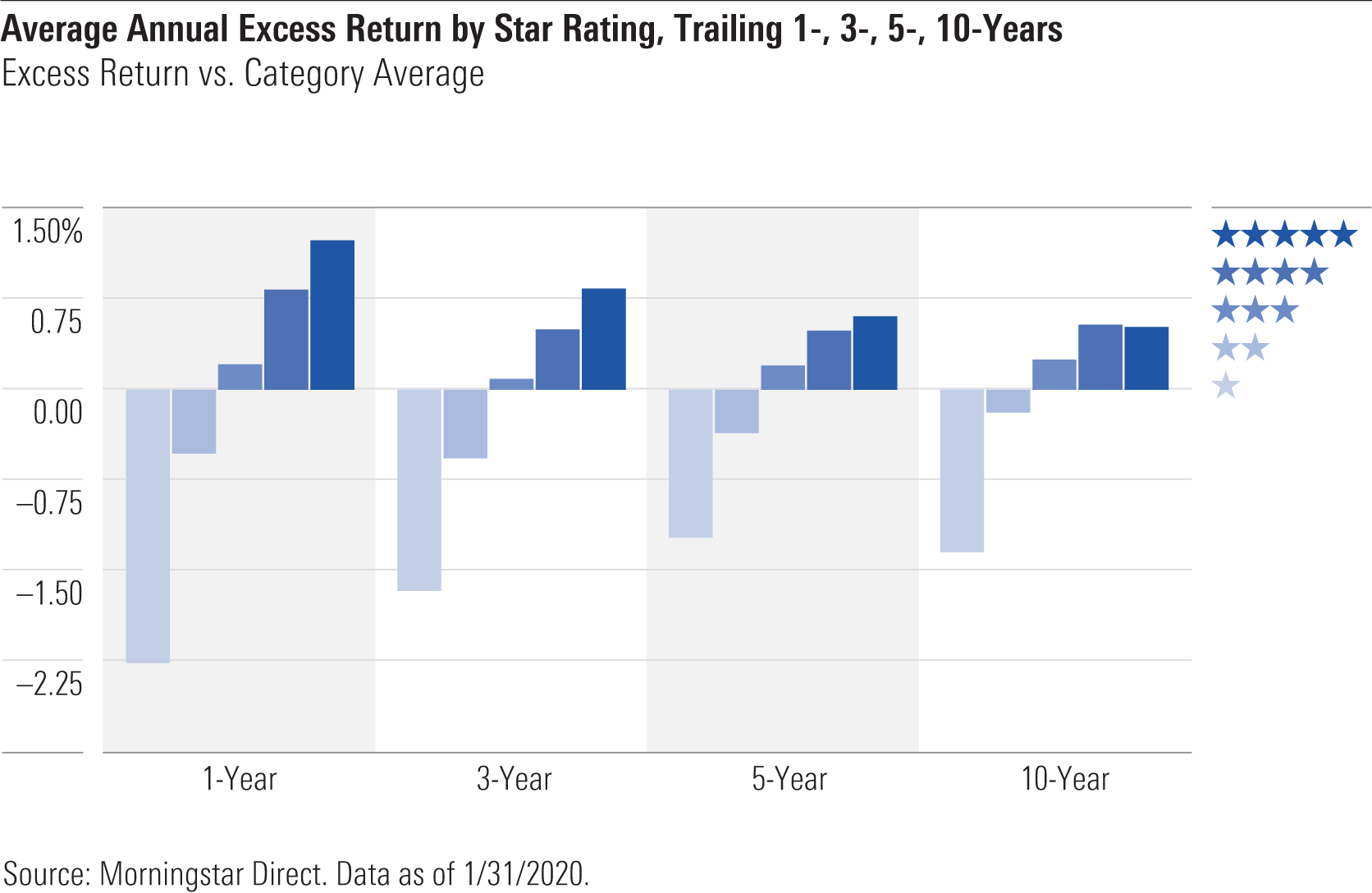 To be sure, given that the star rating ranks funds based on past risk-adjusted returns, then it argues for measuring the ratings' performance based on future risk-adjusted performance. To that end, we compiled the trailing 10-year annual returns and standard deviation for each ratings cohort. 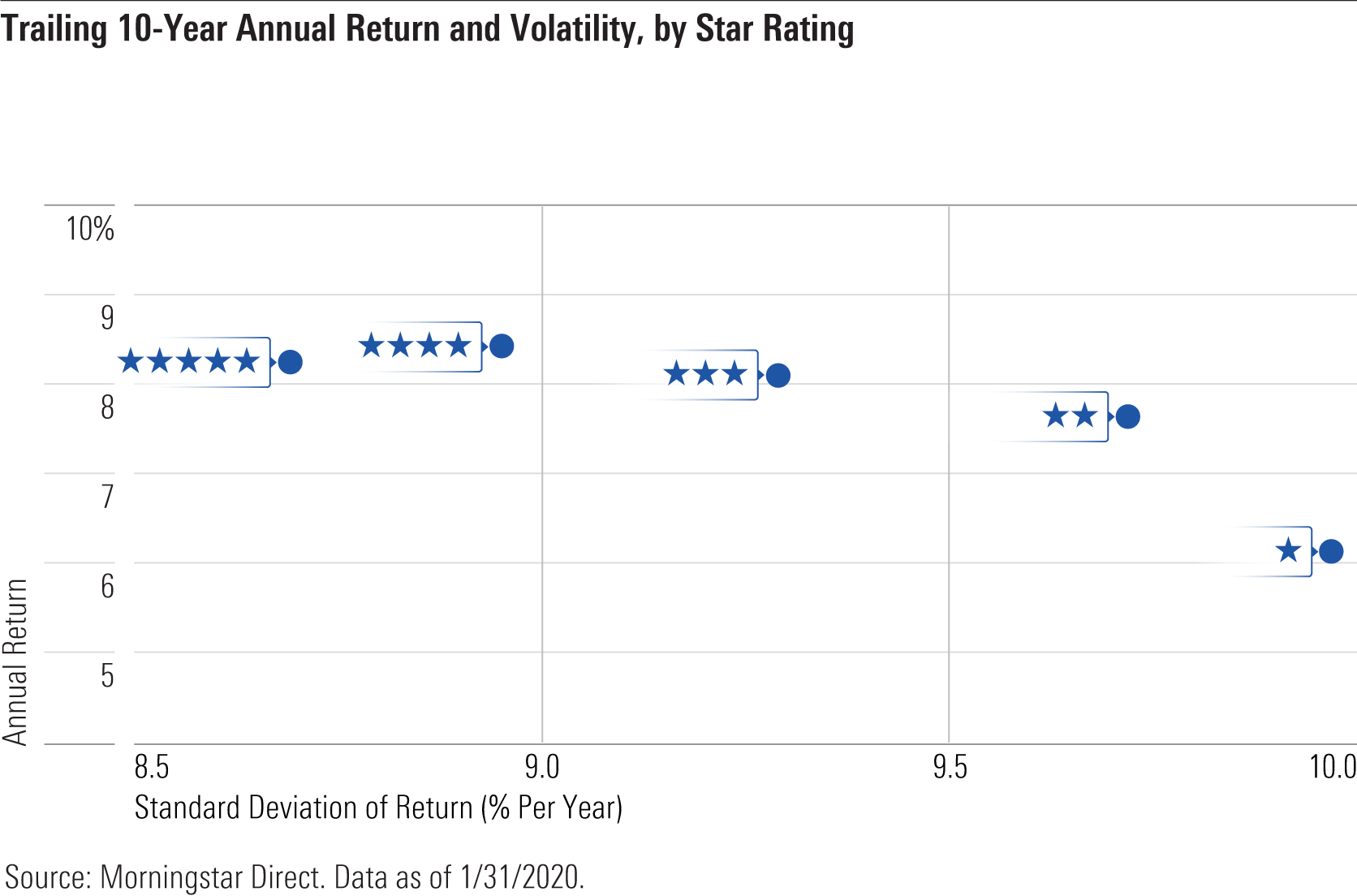 The picture is largely the same, with higher-rated funds producing a better risk/reward trade-off than lower-rated funds over the decade ended Jan. 31, 2020.

All told, these findings suggest the star rating has been effective in sorting funds based on their future performance.

Conclusion Funds with higher star ratings have tended to outperform their average peers, while lower-rated funds have underperformed. This performance is consistent with what we'd expect of a starting point for research like the star rating. These findings suggest the star rating has been effective in tilting the odds in investors' favor, pointing them toward funds that are likelier to outperform in the future and steering them away from those likelier to lag.

To analyze the star rating's longer-term performance, we assigned each rated fund to a rating bucket (1-star, 2-star, 3-star, 4-star, 5-star) based on its rating each month. We did this for all rated funds for all months from February 2010 through January 2020. We equal-weighted the funds in each ratings bucket for a given month. Then we calculated each fund's excess return versus the peer group it was assigned to that month and averaged those excess returns to arrive at an average excess return for that bucket in that month. We repeated this for each bucket and all months, then compounded the average monthly excess returns of each bucket to form annual return series. Because each monthly snapshot contains all funds that existed as of that month-end, including those funds that have since been merged or liquidated away, it mitigates survivorship bias.

Appendix Drilling down to asset classes, we find the star rating was generally effective in pointing investors toward higher-performing funds and away from underperformers during the rally, as shown in the table below. 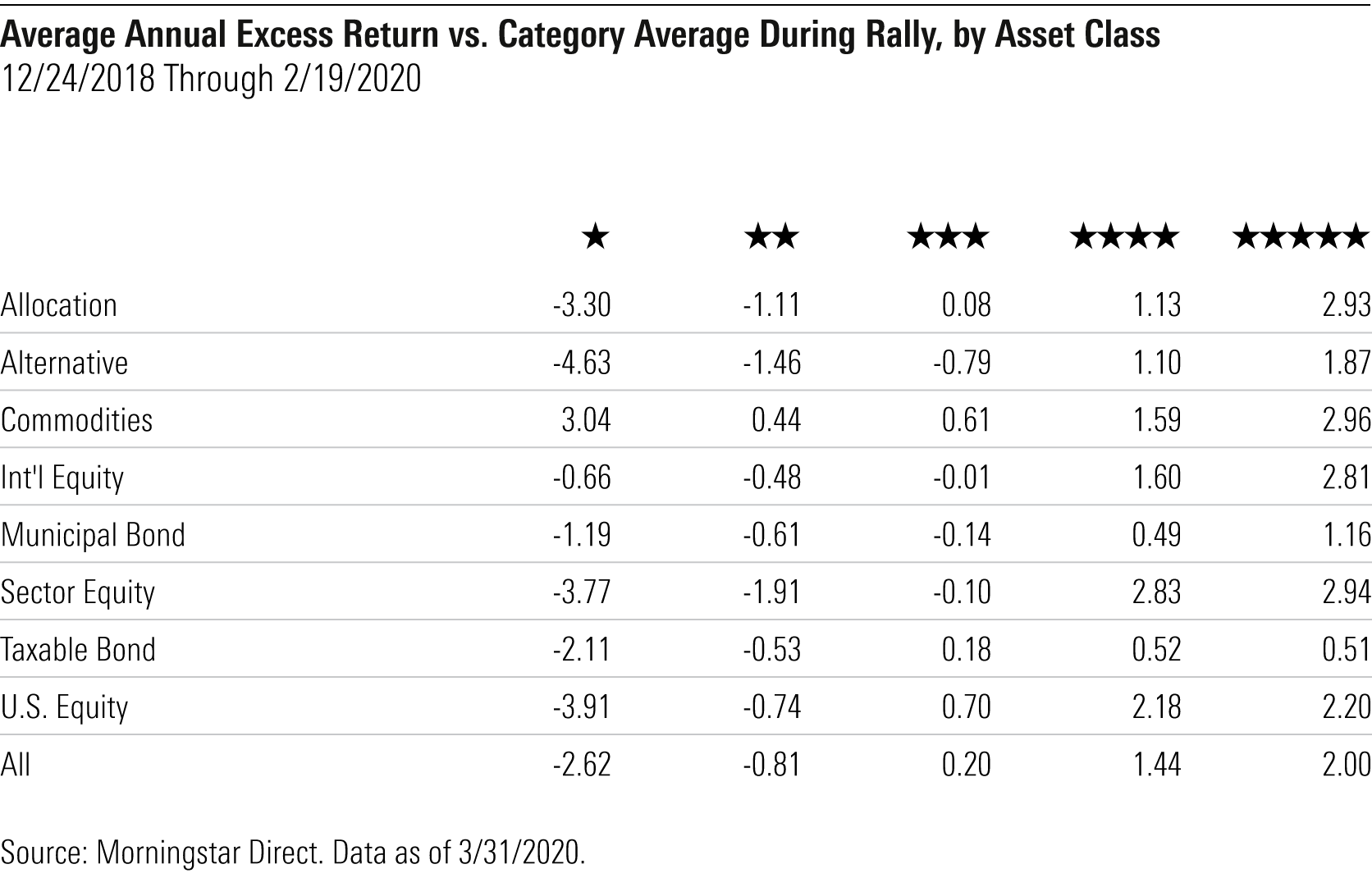 The star rating's performance was a bit more mixed when we looked at the sell-off. As shown below, the rating tended to sort equity funds well, with higher-rated funds outperforming, and lower-rated funds underperforming, on average. But it was spottier when it came to fixed-income and allocation funds, reflecting the reversal of fortune some formerly strong performers experienced. 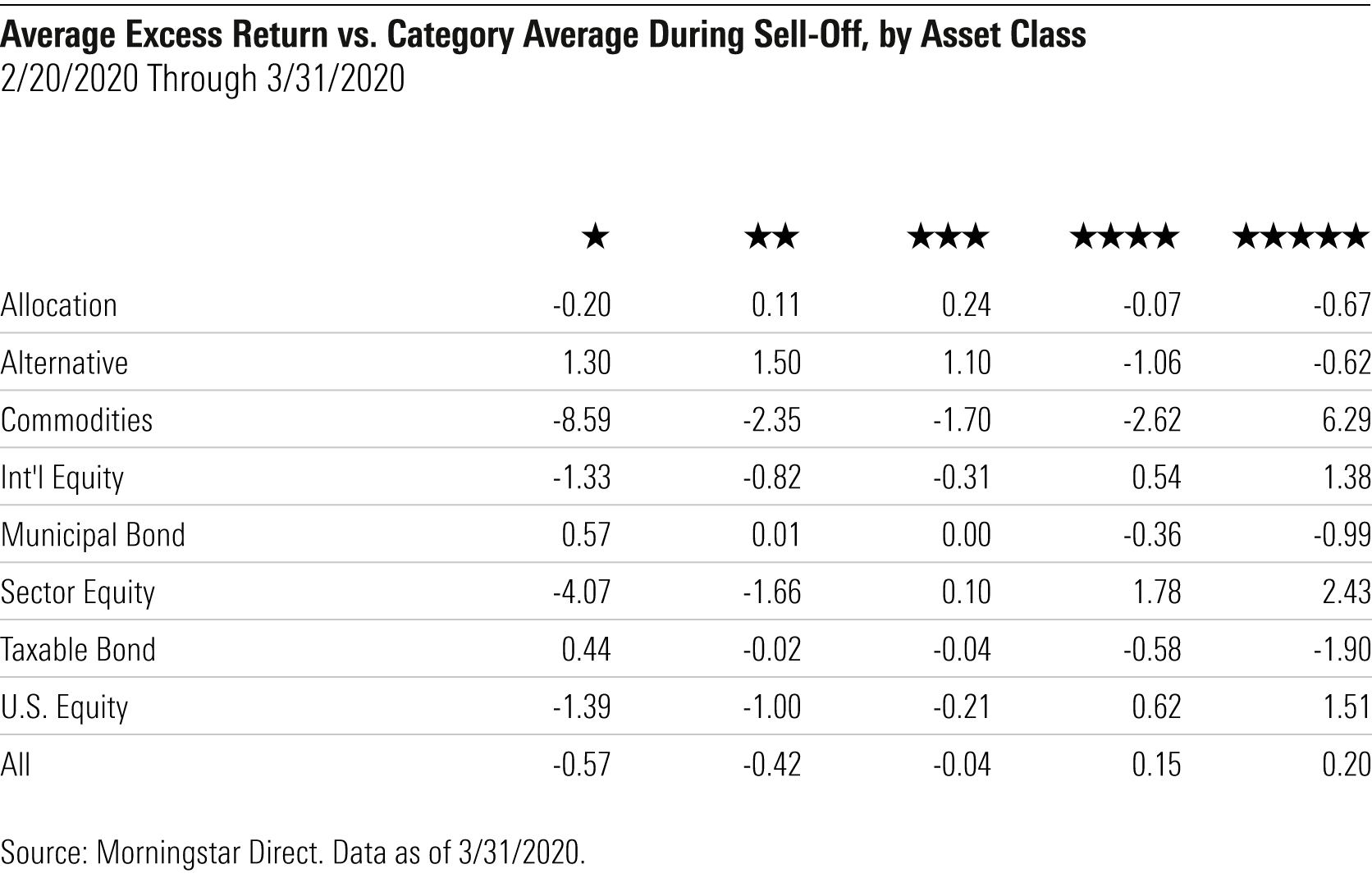 Over the full period, we find that higher-rated funds outperformed their category averages and lower-rated funds underperformed across virtually all asset classes, as shown below. 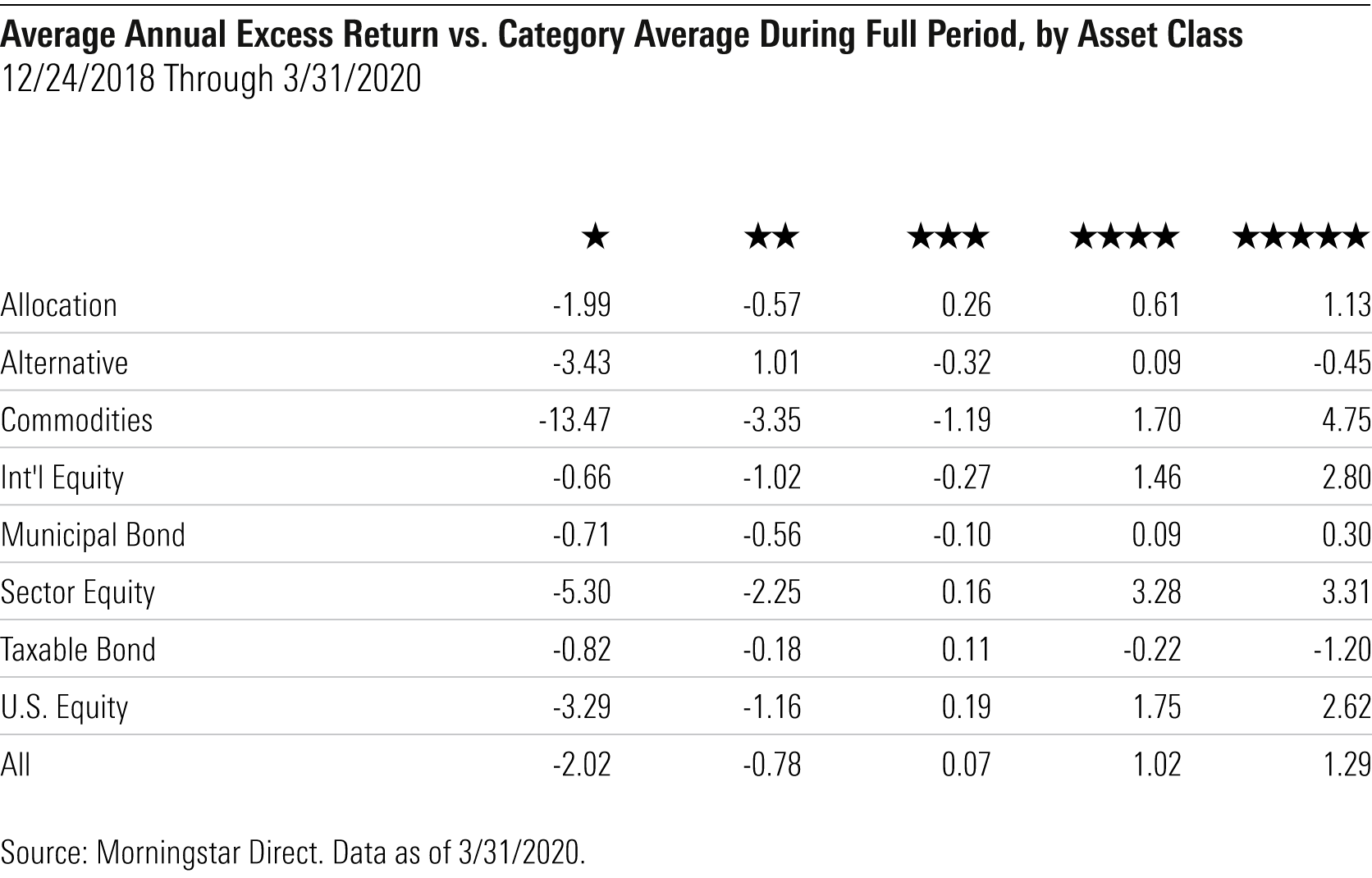