The S&P 500 has been on a wild ride, plunging as much as 34%, bouncing 17%, and selling off again before heading into the weekend. So what should be your next move? For me, it’s to stop, take a breath, and step back from watching every tick in the market. Stop trying to discern if the bottom is here or if the rebound has run out of steam. The goal is to force myself away from focusing on the dollars at risk and refocus on my investment goals and the time horizon to reach those goals. Now is the time to take a hard, dispassionate look at your portfolio, re-evaluate your risk tolerance, assess your portfolio allocations, and only then think about what your next moves should be, if any. To help determine if you should be taking action now, I recommend Combating Action Bias and Is It Too Late to Derisk?

Risk assets have sold off across the board as coronavirus-driven uncertainty has led many investors to sell first and ask questions later. The sell-off was intensified by the especially rapid pace of price declines, which forced leveraged investors, such as hedge funds, to switch from selling what they wanted to sell to selling what they could sell. These sales were driven by the need to raise enough cash by market close to cover margins (a topic covered in Even Safe-Haven Assets Are Feeling the Pressure). The downdraft was exacerbated by the precipitous decline in oil prices caused by a combination of lower near-term demand and an oil price war between Russia and Saudi Arabia. Similar to what occurred when oil prices slid in 2015, not only does the lower oil price directly hit exploration and production companies, but it also has secondary effects on service providers and suppliers to the oil industry.

Where Are We Now? The markets quickly rebounded once the forced liquidation came to an end. It appears that the hot money and weak hands (such as leveraged hedge funds and trading desks) have been shaken out of the market for now. Without the forced liquidation pushing the markets down, market prices determined by rational, fundamental analysis can once again take hold. At this point, the markets appear to be pricing in an extraordinary amount of near-term uncertainty surrounding the duration of the COVID-19 crisis and the potential depth of economic contraction. For example, second-quarter annualized GDP growth estimates from the Street range anywhere from negative 8% to negative 40%. We suggest long-term investors focus on the most relevant question: Will the crisis affect the long-term economic growth potential of the United States? As we have seen in other times of turmoil and paradigm shifts in industries, we expect individuals and corporations will successfully adapt to the new circumstances relatively quickly.

According to Morningstar’s View: The Impact of Coronavirus on the Economy, we expect that the coronavirus outbreak will be contained sometime over the next nine months. We anticipate a vaccine will be ready to be deployed by mid- to late 2021, setting the stage for a return to normality. In addition, there are promising signs of medications to help mitigate virus symptoms in the near term. However, we don’t take the coronavirus outbreak lightly. We estimate that 20% of the population could become infected, of which 5% may require hospitalization and 1% require treatment in an intensive-care unit. While it is extremely difficult to measure the depth and duration of the economic contraction in the near term, we think the long-run impact on world GDP will be much smaller than equity markets are currently implying. If we are correct in our expectations for the containment of the virus, the vast amounts of monetary and fiscal stimulus in the U.S. and abroad will provide a strong tailwind for economic activity to quickly rebound later this year and into early 2021.

To help mitigate the economic derailment caused by shutting in a major portion of the American population, the Federal Reserve and Congress have taken extraordinary steps. The Federal Reserve acted first and implemented numerous measures swiftly and decisively. It has provided the necessary liquidity to keep funding from freezing up, dropped the federal-funds rate to zero to ease interest burdens and spur borrowing demand, and introduced a number of new funding programs. Several of these plans come right from the 2008 global financial crisis playbook, while other programs are new plays altogether. Then, after much negotiation, the Senate and House finally passed the stimulus bill, which was quickly signed by President Trump. While there are certainly controversial items in the legislation for both parties, the intent is to support individuals as well as businesses, large and small, to keep them afloat until some semblance of normalization can occur. 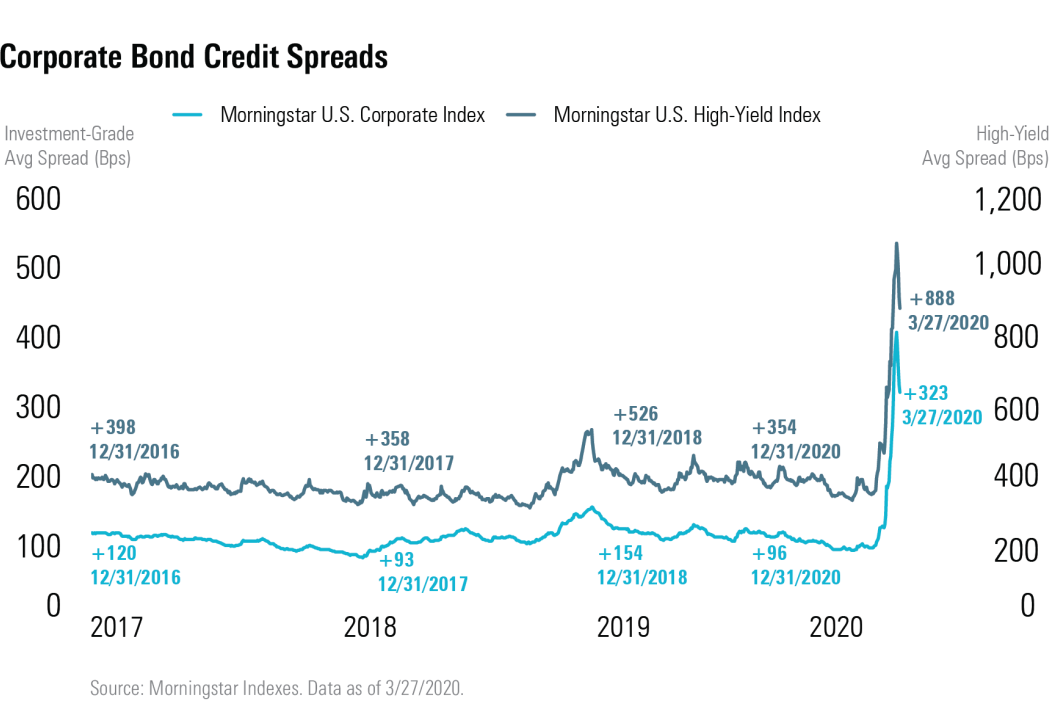 What Is the Opportunity? In the equity markets, we see ample opportunities for long-term investors to purchase stocks at significant discounts to our fair value estimates. Currently, the median price/fair value of the stocks that Morningstar covers in the U.S. is 0.78. Historically, when our median price/fair value metric has dropped into the 0.80-0.85 range, it has indicated that the market has probably overreacted to the downside and represented a good entry point for long-term investors. As an indication of the current opportunity available to long-term investors, as recently as of the end of 2019, our price/fair value was 1.03, indicating that the median North American stock we cover was slightly overvalued. For specific ideas on where we see the most value, please see Buying Opportunity in Multiple Sectors as Market Weighs Short-Term Impact.

This is also an opportune time to swap out of stocks that are relatively overvalued and into those that provide much greater long-term potential. As of March 26, the number of 5-star-rated stocks in the U.S. had increased to 224 (approximately 27% of our coverage) from only 28 at the end of 2019. As you would expect, the more economically sensitive sectors, especially energy, have been under the most pressure. Yet it is these same sectors where we have seen the biggest increase in the differential between the market price and our fair value estimates. Nonetheless, investor sentiment can change quickly, and as the number of infected people rises and hospitals are increasingly burdened, stocks could certainly face another wave of selling pressure. While we think many stocks are selling at attractive levels, we continue to recommend investing within your targeted asset-allocation strategy in relation to your time horizon.

In addition to stifling my emotions as I re-evaluate my current financial position, I am trying to mentally prepare for what could happen next. By most forecasts, there will probably be continued growth in the number of COVID-19 cases diagnosed over the near term, until the recent shutdowns have a chance to "flatten the curve." Also, the economic indicators scheduled to be released over the next few weeks and months will be especially dire. We will see a record amount of economic contraction. For example, the Department of Labor report for the week ended March 21 revealed that seasonally adjusted initial unemployment claims skyrocketed to 3,283,000. To put that in perspective, the next-highest claims number was 695,000 in October 1982. Unfortunately, this is likely to be just the beginning of many such new records.

Finally, I am setting specific targets where I would rebalance my asset allocation and identifying price targets to buy specific stocks that fall within my risk tolerance. Setting those targets now should provide the impetus and self-discipline to make adjustments when those targets are met and remove emotion from decisions during the heat of the moment.