At current levels, both investment-grade and junk bonds are still trading well inside where they widened out to during 2008-09 global credit crisis. This is not surprising; the corporate bond market was essentially broken at that time as fears about the solvency of the entire financial system pushed bond prices toward bankruptcy values. To place the current level for investment-grade bonds in a more relevant historical context, the only other time that investment-grade bonds traded near these credit spread levels was in 2002 following the popping of the tech bubble and the accounting scandals at Enron and MCI WorldCom. Those scandals quickly pushed those two investment-grade companies into bankruptcy and caused the market to question the accounting practices of many companies across the investment-grade universe. The next-closest incident was in late 2011, with fears that contagion from a European banking and sovereign debt crisis stemming from Greece’s default could impair the U.S. economy. 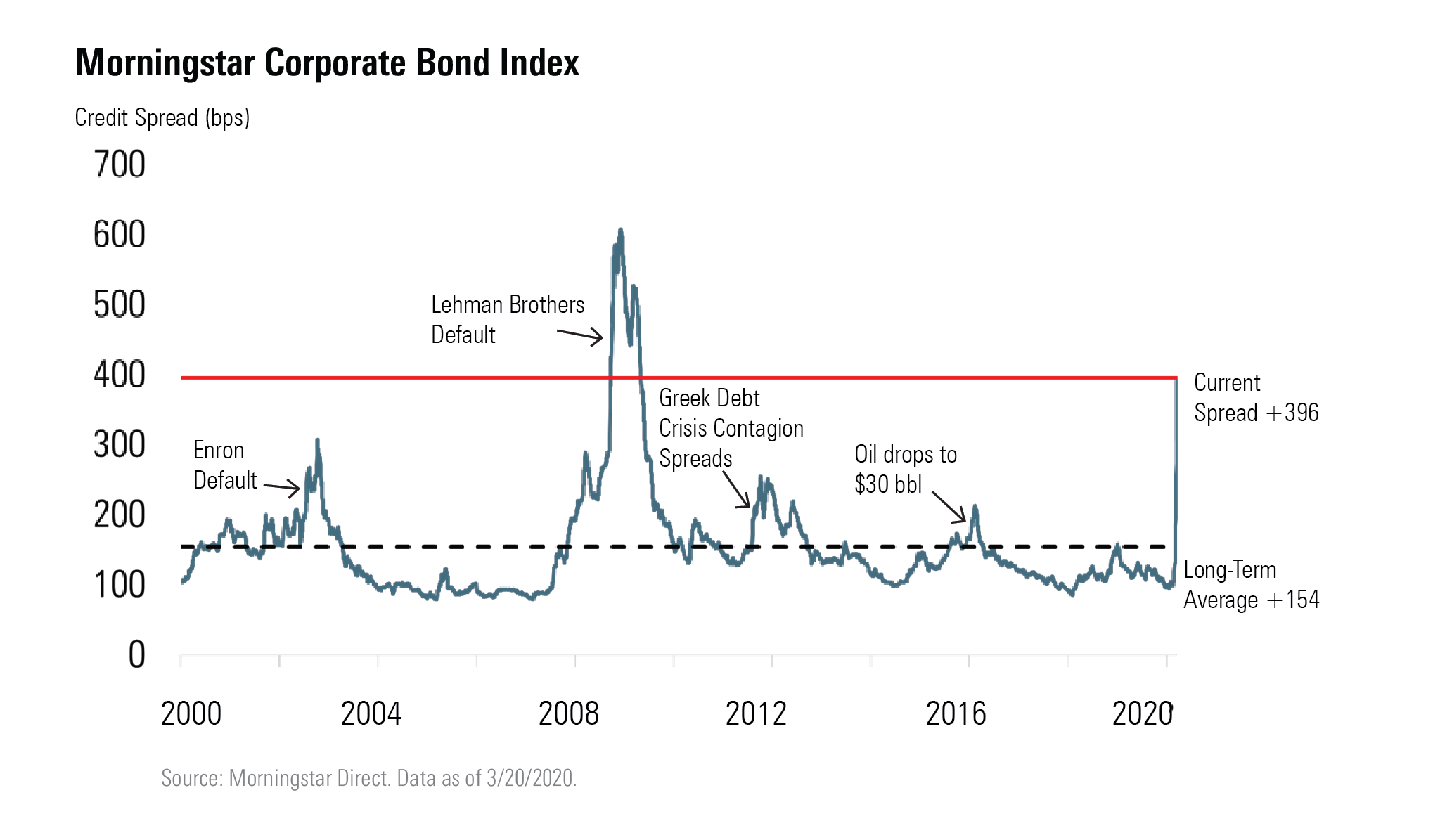 High-yield bonds are also still trading at a tighter spread than during the global financial crisis. The last time that junk bonds were trading anywhere near these levels was in 2001, when many companies filed for default following the tech bubble and recovery values were significantly lower than expected. The next-closest similarities were in 2011, during the European bank and sovereign debt crisis, and in early 2016, when per-barrel oil prices dropped into the low $30s. At that time, the energy sector constituted 16% of the high-yield index and the average price of energy bonds dropped as low as 50 cents on the dollar, which was essentially near their bankruptcy recovery values for those issuers. 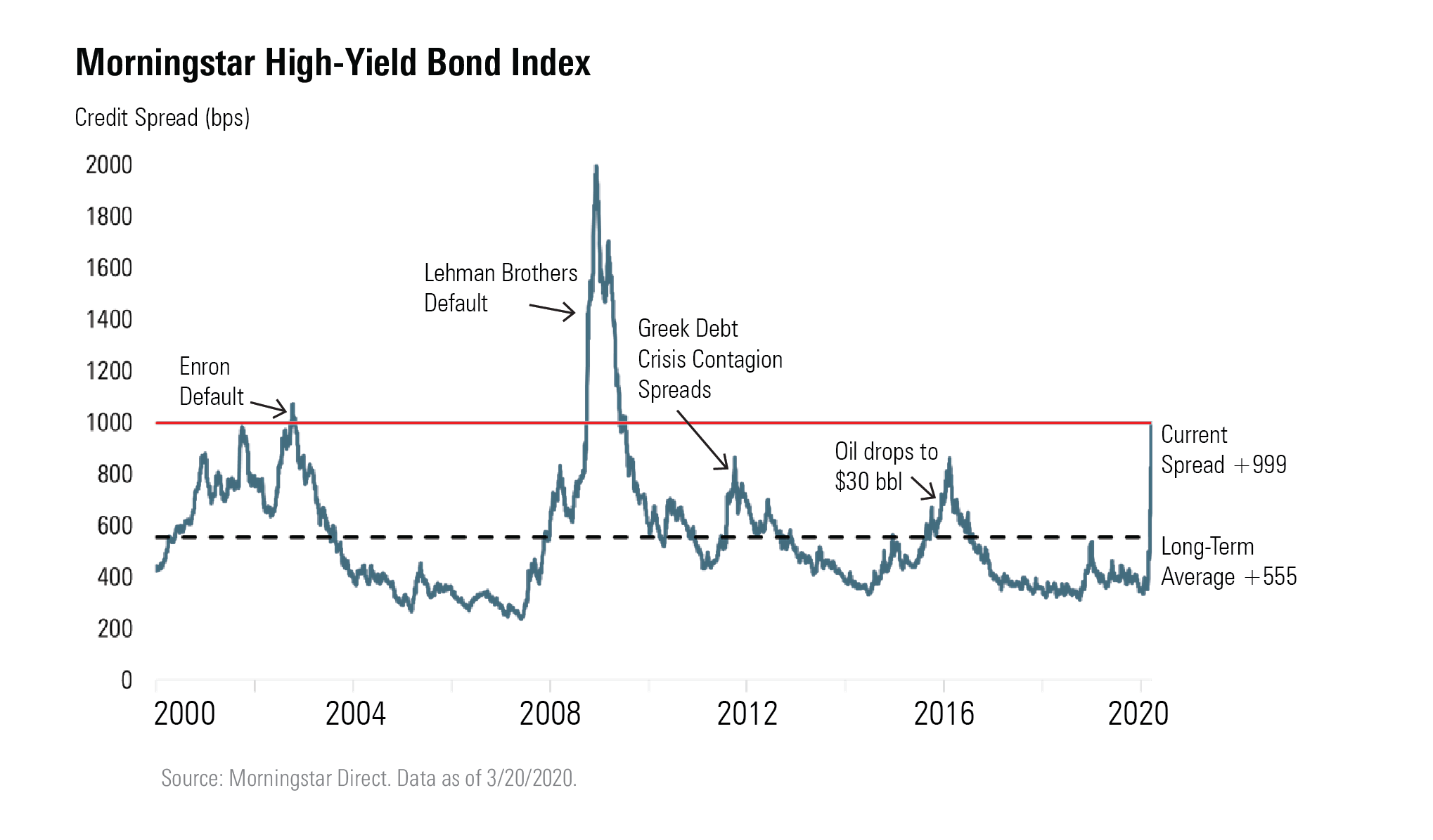 One of the benefits of investing in debt is that the price of a bond will be supported on the downside once it nears the recovery value of a company in bankruptcy. With the widening in credit spreads, the average bond price in the high-yield market has dropped 20 points to about 80 cents on the dollar. While all sectors have been under significant pressure, those sectors that will be most negatively affected in the short term are trading at much lower bond prices. The energy sector has been especially hard hit. The average credit spread in the high-yield energy sector has widened out about double what the rest of the index has widened. This has caused the average bond price in the energy sector to drop over 40 points to under 50 cents on the dollar. At this level, investors are no longer pricing these bonds on the yield they may provide but valuing the bonds on what they think the recovery value of the company would be in bankruptcy. The prices on bonds for many other sectors that will be most heavily affected by the economic slowdown have also traded down toward levels that are closer to their bankruptcy recovery value. As a bond’s price approaches recovery value, there is little reason to sell. Also, the bid from distressed debt investors that specialize in buying debt of companies either in or close to default should limit further downside price risk.

In addition to further downside risk being mitigated by the low dollar prices, the combination of monetary easing and new liquidity programs instituted by the Federal Reserve and the implementation of currently negotiated fiscal programs from Congress should limit the downside economic impact of the coronavirus pandemic. Further, there has been positive news regarding the potential efficacy of existing drugs that may help to treat COVID-19 patients.

High-Yield Outflows Surge to Record-Breaking Levels Over the past month, there has been a tremendous amount of selling pressure in the high-yield market from both institutional and retail investors. Through the week ended March 18, there has been five consecutive weeks of outflows across high-yield open-end and exchange-traded funds. Over the past five weeks, total outflows of $17.5 billion more than offset earlier inflows, and year to date, $14.4 billion has been redeemed out of the high-yield space. This period is the single-greatest amount of outflows registered over five weeks since we began tracking the data in June 2009.

More recently, though, the wide credit spreads have tempted some investors to dip their toes back into the high-yield waters. On March 19 and 20, outflows reversed into inflows as there was $443 million of net new unit creation among high-yield ETFs. 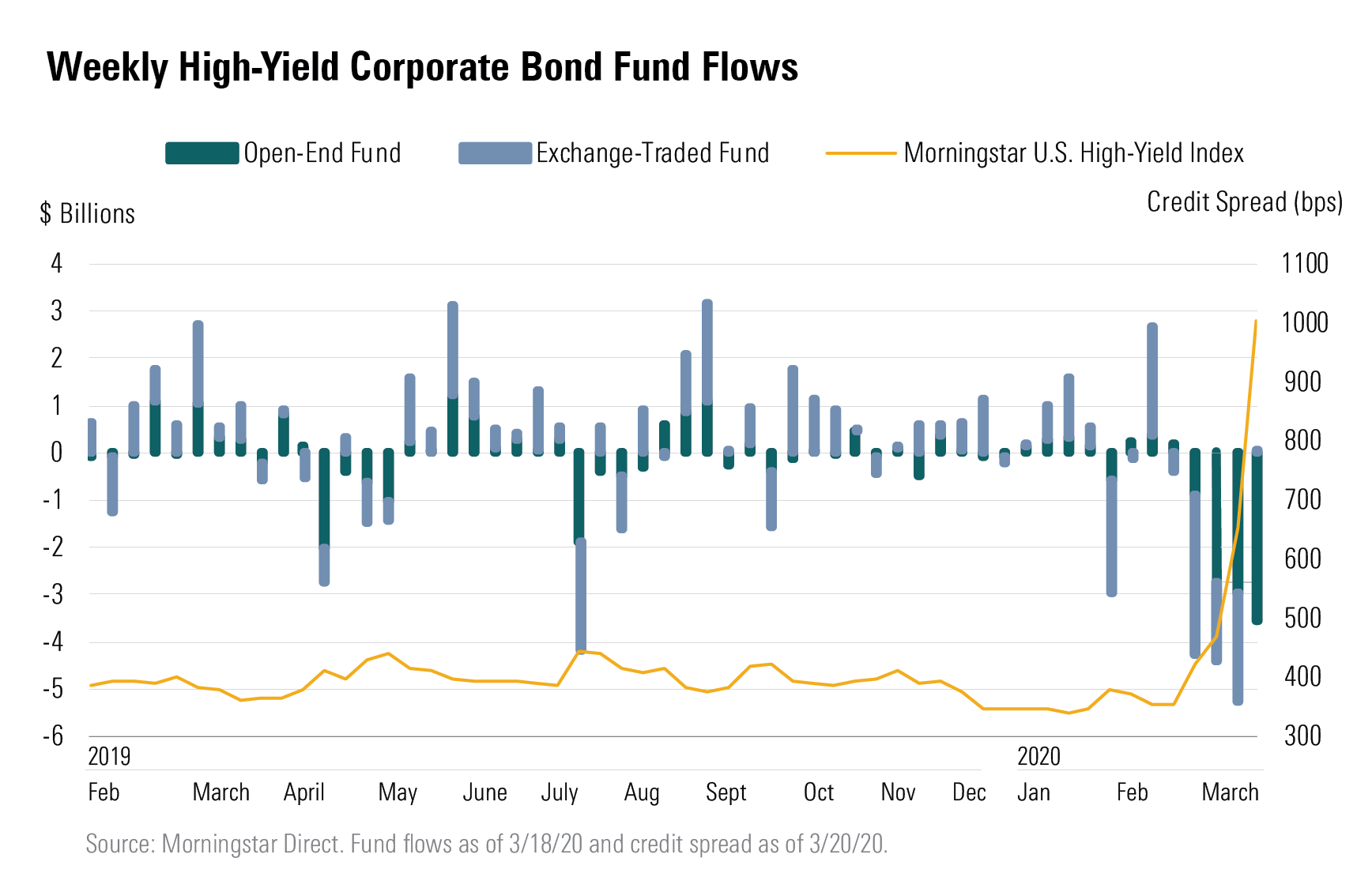 Investor Takeaway Corporate credit spreads are at levels similar to where they peaked during other times of market turmoil. At these levels, a significant amount of the downside risk for corporate bonds has already been priced in. The corporate bond market is pricing in wholesale downgrades across the energy and cyclical sectors. In fact, many of the issuers that are at risk of being downgraded from investment grade to high yield are already trading at high-yield levels. In addition, in the high-yield asset class, bond prices for those companies that will be most affected by either the economic slowdown or low oil prices are trading at prices that reflect the estimated value of a company in bankruptcy. Once bond prices hit these recovery values, that price typically acts as a floor and limits further downside risk.

While no one can time a market bottom, and momentum certainly could continue to push credit spreads wider, for investors able to withstand additional market volatility, now may be an opportune time to rebalance fixed-income portfolios and start to layer in additional corporate credit fund exposure.