Since the equity market peak on Feb. 19, 2020, developed-markets sovereign debt outside the United States hasn’t held up as well as U.S. Treasuries but still provided some much-needed ballast against the equity market’s steep declines. Global Treasuries (ex-U.S.) hedged back to U.S. dollars were down 2.2% from the equity market peak on Feb. 20 through March 19 and roughly flat for the year to date through March 19. Taking on the underlying currency exposures wasn’t quite as effective, as most currencies depreciated against the U.S. dollar: Unhedged returns were negative 2.8% and negative 4.2% for the respective periods but still a good outcome all considered.

There have been some dizzying turns for global fixed-income investors as stocks have abruptly reversed course intraday or on days when investors ran to cash and liquidity seized up in unusual places. Yields on German and Japanese 10-year government bonds, traditional safe-haven assets, fell in tandem with the U.S. 10-year Treasury as the equity sell-off got underway. However, prices on these bonds became much more volatile starting on March 9 before stabilizing and rebounding during the middle of this week as the market welcomed increased central bank action and governments’ stimulus measures. Even Italian and Spanish 10-year bonds, whose yields had climbed since the start of the equity market slide, have also found more solid footing in recent days. 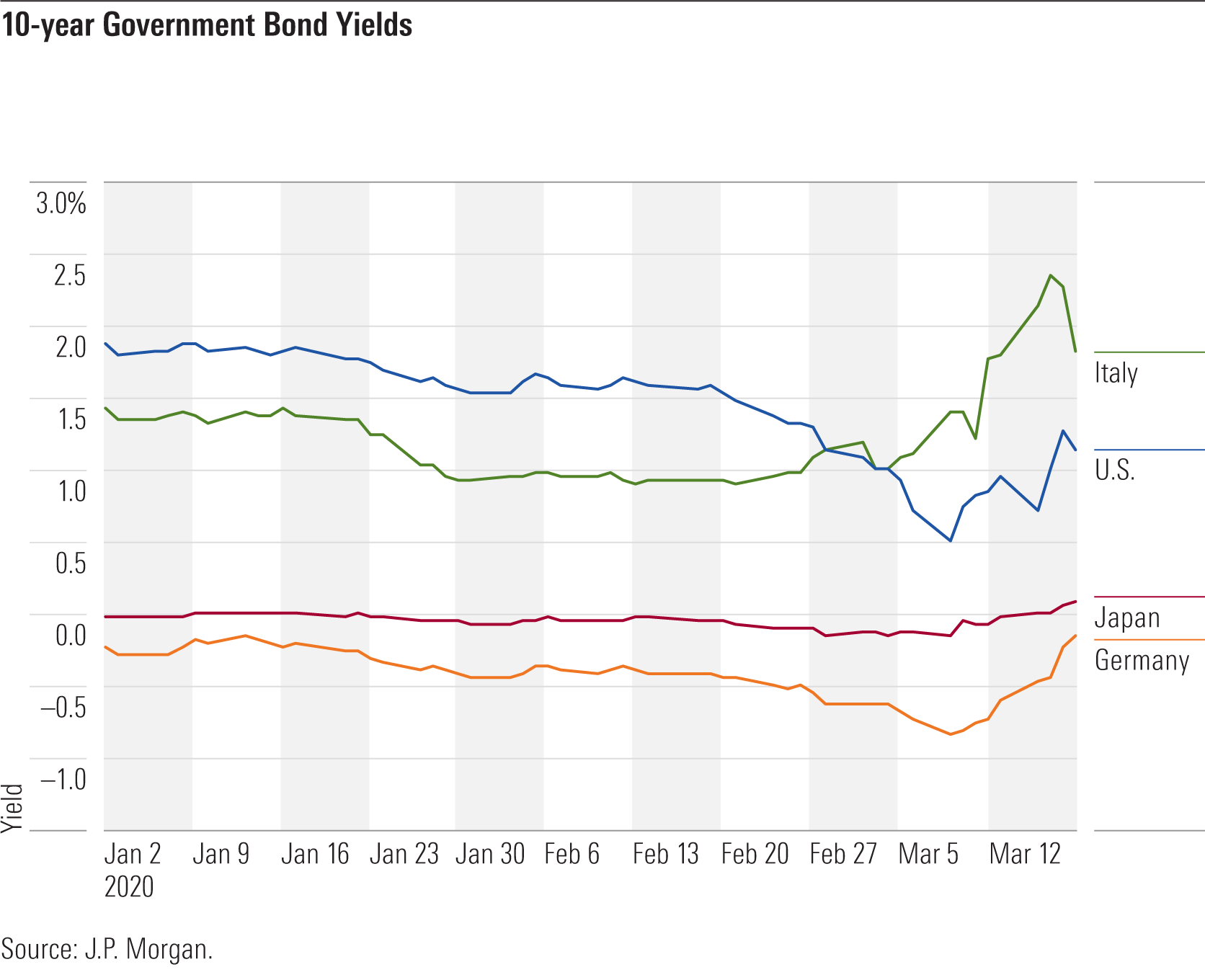 The currency market has seen ample volatility. The yen and Swiss franc have come along for the ride with the U.S. dollar, surging versus most currencies. The oil price slide has put heavy pressure on several others including the Canadian dollar, Norwegian krone, and Russian ruble (down 8%, 17%, and 20%, respectively, versus the U.S. dollar from Feb. 20 through March 19), while investors have also dumped emerging-markets currencies en masse (the Mexican peso and Brazilian real were down 23% and 15%).

Global Treasuries, Safe-Haven Currencies Helping Certain Strategies The U.S. dollar-hedged Bloomberg Barclays Global Aggregate Index was down 2.7% from Feb. 20 through March 19, roughly on par with the Bloomberg Barclays U.S. Aggregate Index. (The unhedged version of this bogy slid by 3.8%.) U.S. dollar-hedged world bond funds, on average, have lost less in this downturn compared with their unhedged counterparts, particularly those like Vanguard Total International Bond Index (VTABX) (down 3%) that are underpinned by investment-grade sovereigns.

That said, some active global bond managers who have considerable flexibility to deviate from the index in their rates and currency exposure have also limited losses to similar levels. Hartford World Bond (HWDIX) slipped by 3.2% over this stretch thanks to the team’s risk-conscious approach, which keeps the fund anchored in developed-markets sovereigns (roughly half of assets) and included a large yen stake at the end of February. Templeton Global Bond (TGBAX), which focuses on global sovereign bonds and currencies but resides in the nontraditional bond Morningstar Category because of its long-held negative duration stance, has also held up better than most (down 3.4%), thanks to its long yen and Swiss franc positions, a short on the Australian dollar, and double-digit cash stake, which have provided insulation against its riskier emerging-markets-bond positions.

Credit, Emerging-Markets Taking Hits as Expected Pressures on corporate credit have been felt worldwide. European high-yield spreads have blown out more than those on emerging-markets hard-currency debt since Feb. 20, a sell-off that was roughly on par with U.S. high yield. IShares International High Yield Bond ETF (HYXU) was down 20.9% for this stretch, a level similar to U.S. high-yield index trackers. On certain days, investment-grade corporates have suffered more than high yield given concerns about massive downgrades of BBB rated debt, but overall losses have been less severe. SPDR Bloomberg Barclays International Corporate Bond ETF (IBND) slid by 10.7%, which again was somewhat similar to losses on U.S. investment-grade corporate-focused strategies.

Global strategies with more exposure to emerging-markets debt have generally suffered as well. The JPM EMBI Global Diversified Index, which tracks hard-currency denominated emerging-markets sovereigns, was down 20.8%. Despite the cushion of being mostly U.S. dollar-denominated, roughly 45% of bonds in this index are below investment grade, and many of its constituent countries’ fates are tied to commodities prices. Some of these sovereigns were already in default (Venezuela, Argentina, and Lebanon) prior to this sell-off. The JPM GBI-EM Global Diversified, which tracks emerging-markets sovereigns denominated in local currencies, was down 17.8% over this period. This is a more liquid market with more investment-grade debt, but steep currency losses have certainly taken their toll.

Dodge & Cox Global Bond (DODLX), similar to the firm’s other offerings, has a healthy stake in corporates and emerging-markets bonds (38% and 25% at the end of 2019) and slid by 14.4%, trailing 90% of distinct world bond peers. BrandywineGlobal Global Opportunities Bond (GOBIX), which has long had more exposure to emerging-markets debt and Mexico in particular (14% of bond exposure and 11% of currency exposure as of Feb. 29, 2020), plus lower exposure to the U.S. dollar, was down 16.9%.

Dedicated emerging-markets bond funds have been among the hardest hit in the fixed-income universe--the category median loss was 20.5%--due to steep price declines on both rates and currencies. TCW Emerging Markets Income (TGEIX), which invests across emerging-markets hard- and local-currency sovereigns as well as corporates, plunged by 27.6% because of its focus on Middle Eastern bonds, which have been suffered because of their oil dependence as well as a Ukraine overweight and some hard-hit corporates.

Sit Tight, Rebalance as Needed Bond investors need to brace for more choppiness as markets react to coronavirus- and recession-related news, with emerging-markets and corporates likely to remain under pressure and the potential for more liquidity issues putting general strain on the markets. The best thing is to sit tight and rebalance as needed to stick to your allocation targets. Higher-quality bond funds should continue to provide cushion against the much more dramatic stock market declines. Skilled active managers have been through tough market conditions before, and they will take advantage of bargains that will pay off down the line.

Karin Anderson has a position in the following securities mentioned above: TGBAX. Find out about Morningstar’s editorial policies.