An examination of the largest actively managed stock mutual funds shows what investors have been up against since fears of the coronavirus pandemic's economic impact triggered a global share-price rerating. There has been no place to hide, but growth stocks have generally fared better than their value counterparts. Energy and financials stocks have been bear-traps, and travel restrictions and incessant pressure to avoid crowds and interpersonal contact have strangled leisure, gaming, and transportation-related shares. None of the largest active equity mutual funds have avoided steep losses, but their relative helpings of these sectors and industries have determined whether they have endured more pain than peers and indexes, so far.

The Worst Dodge & Cox Stock (DODGX) and Dodge & Cox International Stock (DODFX) have fallen the hardest in absolute and relative-to-Morningstar Category terms among the 20 biggest active equity mutual funds. Their portfolio stances entering 2020 were not inconsistent with the firm’s value approach, but they have proved suboptimal. For a few years now, Dodge & Cox managers have found what they concluded were undervalued opportunities in financials and energy--primarily in the United States and Europe. The market’s plunge has hit those sectors the hardest. The sharp drop in oil prices hammered Occidental Petroleum (OXY), a top-10 holding in Dodge & Cox Stock at the end of 2019. UniCredit (UNCFF), a big position in Dodge & Cox International Stock, is an Italian bank operating in a hot spot of the coronavirus outbreak. The funds still have strong 10- and 15-year records and have been in tough spots before only to rebound later. This will still test fundholders’ resolve again, though.

Vanguard Primecap (VPMCX) also has taken it on the chin in absolute and relative terms. Its penchant for airline stocks and cruise lines has been a liability in the coronavirus bear market. The fund’s modest positions in Royal Caribbean Cruises (RCL) and Carnival (CCL) have each shed more than two thirds of their value through March 16, and a top-20 position in United Airlines (UAL) was down by more than half. That contributed to the investor shares’ 29.75% loss from Feb. 20, 2020, through March 16, 2020, 1.2 percentage points worse than the Russell 1000 Growth Index. The nearly $62 billion fund, though, has done better than expected given its 7.5% stake in airlines at year-end 2019, versus 0.2% for the index. The fund’s 9% annualized gain over the past 15 years through March 16, 2020, still holds a modest edge of 5 basis points on the index.

The Less Worse There were no real winners when the best-performing strategies still lost a fourth of their value in such a short time, but American Funds American Mutual (AMRMX) and Vanguard Dividend Growth (VDIGX) managed to lose less than about 90% or more of their category peers.

American Funds American Mutual’s tendency to keep a sizable stake of its assets in cash and bonds while rooting the equity portfolio in competitively advantaged dividend-payers has once again contributed to its resiliency. Since the Russell 1000 Value Index peaked on Feb. 12, 2020, the A shares’ 25.6% loss through March 16 was 6.7 percentage points better than that benchmark and placed in the large-value Morningstar Category’s top 5%. Several stocks contributed to the fund’s resiliency so far this year but none more than its top-10 position in Gilead Sciences (GILD). Gilead’s shares posted a modest gain thanks in part to the promise its antiviral drug Remdesivir might hold for combating the coronavirus.

Vanguard Dividend Growth has held its own. Since Feb. 20, 2020, the fund’s 26.3% loss through March 16 was 3.1 percentage points better than the S&P 500 and edged the fund’s Nasdaq U.S. Dividend Achievers Select Index by 3 basis points. Owning only one energy stock and hefty stakes of dividend-paying consumer defensive and healthcare companies, such as Costco (COST) and Amgen (AMGN), helped. The stocks comprising the fund’s Nasdaq benchmark peaked on Feb. 14, however. From then through March 16, the fund’s 26.6% loss was 5 basis points behind the index’s. The fund’s lone energy holding, Exxon Mobil (XOM), held it back versus its dividend-growth benchmark in that period, as did not investing in benchmark constituent Abbott Laboratories (ABT). The fund’s long-term record remains superior to the Nasdaq index, though.

The managers for MFS Value (MEIAX) target durable firms with below-average business risk that they believe can generate cash flow throughout the business cycle. That has typically given the strategy an edge during down markets, including during the downturn beginning in February. In the recent downturn, the strategy benefited from an underweighting in the plummeting energy sector, which the managers generally avoid because energy firms’ revenues are closely tied to volatile commodity prices. It also benefited from solid picks across most sectors, but notably its industrials holdings held up relatively well.

The Rest The largest active equity mutual fund, American Funds Growth Fund of America (AGTHX), rued its modest energy and financials overweights versus the Russell 1000 Growth Index. Between Feb. 20, 2020, and March 16, 2020, the fund’s 29.2% loss was 64 basis points worse than the Russell 1000 Growth. The $150 billion fund, however, did edge its typical rival within the large-growth Morningstar Category by 10 basis points. The fund’s results over the past 10- and 15-year periods are mediocre, but its record over the trailing 20 years remains impressive. It held up especially well during the 2000-02 dot-com bear market when its value leanings were an advantage.

The $112 billion Fidelity Contrafund’s (FCNTX) 28.2% loss from Feb. 20 to March 16 was roughly in line with the Russell 1000 Growth Index’s 28.6% loss. The fund’s decline was more than a percentage point shallower than its average large-growth Morningstar Category peer, though. Fidelity Contrafund manager Will Danoff’s consumer discretionary positioning has been advantageous: It held none of the online travel agencies, such as Booking Holdings (BKNG) and Expedia (EXPE), down 34.5% and 54.9%, respectively, and few hard-hit brick-and-mortar retailers. Instead, it favored Amazon.com (AMZN)—the fund’s second-biggest holding, as of Jan. 31—which was only down 22.2%.

The fund’s relatively light stake (roughly 2% versus the Russell 1000 Growth’s 5.8%) in capital goods companies has helped a lot. Within the industry group, half the benchmark’s constituents have lost at least 30% of their value. The fund sidestepped Boeing (BA), which nosedived 60% and was one of the index’s most significant detractors.

T. Rowe Price Blue Chip Growth (TRBCX) lost about 29% from Feb. 20 through March 16, around the middle of the large-growth Morningstar Category and just slightly behind the Russell 1000 Growth Index. Many of its travel-related picks got hit, including Royal Caribbean Cruises, which has lost more than 75% of its value in 2020. Wynn Resorts (WYNN), United Airlines, and Boeing are all down more than 50% for the year to date. Its above-benchmark stake in financials hasn’t helped, either. WellCare Health Plans WCG and software-related picks such as ServiceNow (NOW) and Atlassian (TEAM) have fared better.

T. Rowe Price Growth Stock’s (PRGFX) 30% loss from the February market peak through March 16 landed in the large-growth category’s bottom quartile and lagged the Russell 1000 Growth by 2 percentage points. The market has hammered its casino picks, including MGM Resorts (MGM), Wynn Resorts, and Las Vegas Sands (LVS), as well as retailers that have closed stores, such as Lululemon fAthletica (LULU) and Nike (NKE) . A small stake in energy has weighed on results, too. On the plus side, it does have a tiny position in Zoom Video Communications (ZOOM), up more than 50% for the year to date, and Amazon and Netflix (NFLX) have held up well. 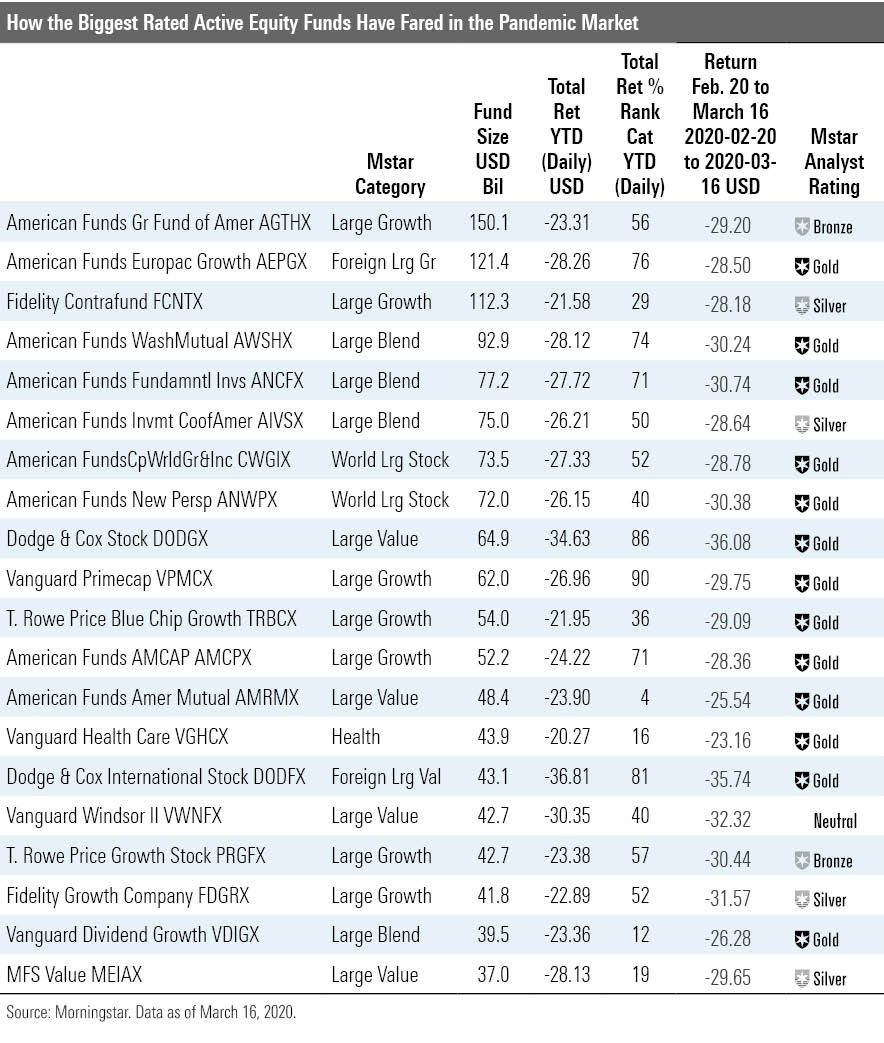 Dan Culloton has a position in the following securities mentioned above: VDIGX, DODFX. Find out about Morningstar’s editorial policies.