Note: This article was drafted over the weekend and completed on Monday, before the U.S. stock markets closed. Its argument and conclusions remain unchanged after the S&P 500's 12% Monday plunge, but of course the overall losses for the current bear market are now larger than depicted in the article.

Third From Bottom Two weeks ago, I wrote a column on how the stock market might react to the coronavirus containment effort. The Dow Jones Industrial Average dropped 800 points. Last week I published a sequel. Stocks performed worse yet.

I will not tempt fate for a third time; this article doesn’t look forward. As Sarah Vaughn said after hearing Aretha Franklin perform “Skylark,” “I’m never singing that song again.” (No doubt I will break that vow, but not today, because I have no idea how stocks might behave in the upcoming weeks.) Instead, the column evaluates what did happen in order to see which alternative investments, if any, offered adequate sanctuary for the recent slide.

First, a glance at the numbers in order to understand the scale of 2020’s implosion. Starting in September 1976, when Vanguard Index 500 Fund (VFINX) began operations, I calculated its performance for all consecutive periods of three calendar weeks. (I used the fund as a proxy for the benchmark itself, as Morningstar’s S&P 500 returns are only monthly before 1988.) The result for the most recent three calendar weeks, from Feb. 23 through March 14, was a tidy 18.7% loss.

In only two years since 1976 has the S&P 500 recorded a lower three-week performance than that. It did so several times, due to overlapping time periods, in 1987 and 2008. Aside from those two instances, the past three weeks have been the market’s weakest such stretch since Vanguard’s fund began operations. We’re number three!

The chart below depicts the largest of the 1987 and 2008 three-week losses, plus the recent results, plus the weakest three-week period of the New Era downturn. Also shown are the eventual top-to-bottom losses for each of the three previous bears. They may prove to be roughly adequate guides for the near future or they may not. 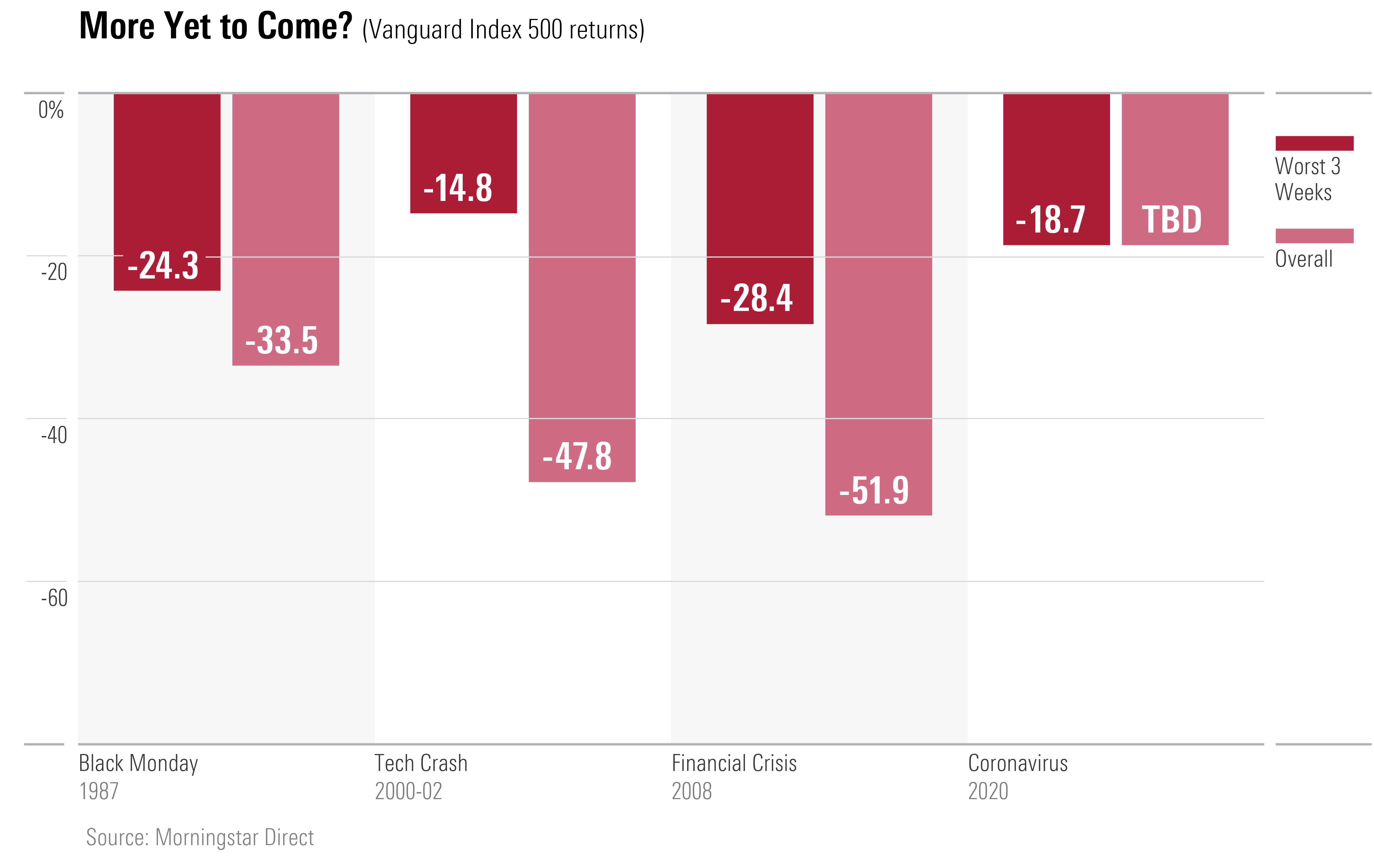 Leading Alternatives Entering the downturn, U.S. stock investors could have diversified their portfolios in several ways.

The oldest asset predates equities themselves: gold. As my mother-in-law can attest, having survived World War II courtesy of coins that her mother had stashed in the basement, gold can be a life saver. But it has become less fashionable in modern portfolios, partially because today’s holdings are electronic rather than tangible and partially because inflation has abated. During recent stock market slumps, gold has been an unreliable performer.

After gold comes bonds, government notes in particular. Such securities have existed for centuries rather than millennia, but that nevertheless makes them veterans. Long, high-quality bonds typically fare well during stock market panics. They were the star performers during the 2008 financial crisis.

Foreign equities arrived much later. They were once regarded as moderately useful diversifiers for U.S. stocks. Not these days. Nobody regards international stocks, even from emerging or frontier countries, as offering anything more than a marginal benefit. Not only are the global equity markets closely linked, but as the United States is by far the largest bourse, its problems also inevitably spill over.

In the '90s, institutional investors began to avail themselves of unregistered hedge funds. Such funds use various strategies, ranging from owning nothing but equities to possessing only stocks but hedging their bets through short positions (thus, the name “hedge” fund) to owning no equities whatsoever. Generalizing about hedge fund returns is therefore a perilous task. It’s useful, though, to know how the overall body performed.

Ten years later, following the 2008 crash, mutual fund and exchange-traded fund sponsors launched “liquid alternatives”--registered funds that could be owned by retail investors and redeemed daily but which used hedge fund strategies. (Ironically, as liquid alternatives debuted, hedge funds faced fierce criticism for their 2008 showings.) Morningstar’s Erol Alitovski has already detailed how each of the several liquid alternatives categories have performed; this column will look only at the broadest group, multialternative funds.

The latest potential diversifier is cryptocurrency. The SEC doesn’t permit registered funds to hold cryptocurrencies, but investors can hold such currencies through other means. As an alternative form of cash, cryptocurrencies presumably should offer some level of protection during stock market crashes. Bitcoin is the obvious choice for testing cryptocurrency performance.

By the Numbers This makes for six possible escape routes:

The results are shown below:

1)      Gold bullion Sadly, this loss was as expected. Gold will no doubt prove invaluable during financial catastrophe, when tangible assets once again become most important. Until then, not so much. Gold prices fell during the 2008 financial crisis and during the first half of the technology-stock sell-off. It’s hard to defend owning gold.

3)     Foreign stocks Even worse than in the United States! This asset was for illustration purposes only, because foreign stocks never stood a chance of avoiding such a major U.S. sell-off, particularly when the root cause is worldwide. Still, even a slightly better result would have been nice.

4)     Hedge funds A trick question. Hedge funds won’t report their March results until next month. Don’t expect many miracles, though. The Barclay Hedge Fund Index declined in January, and then another 2.8% in February, and will almost surely lose money in March, because hedge funds on average have long equity exposures. As a rough estimate, expect hedge funds to perform about as well as their registered rivals, multialternative funds.

5)     Multialternative mutual funds On the one hand, negative 8.2% isn’t awful. On the other hand, it’s not very impressive for funds that didn’t make much money on the way up. As my friend Javier Estrada says, “Better to make $20 and then lose $10, than to make $10 and then lose $3.” For those with stern constitutions, that is.

6)     Bitcoin Ah, bitcoin! Speculators will speculate. I will not.

John Rekenthaler does not own shares in any of the securities mentioned above. Find out about Morningstar’s editorial policies.