Animal testing is a polarizing issue.

Some believe it’s wrong, period: Humans don’t have the right to subject animals to testing or experimentation of any kind for any reason. Animal rights organization People for the Ethical Treatment of Animals says traditional animal testing methods are "expensive, cruel, and generally inapplicable to humans." PETA advocates instead for more-modern alternatives such as in vitro testing using human cells and computer modeling.

On the other hand, others would argue that conducting experiments and research using live animals provides critical insight into biology and disease that has led to medical breakthroughs and life-saving therapies. Well-known and oft-cited examples include insulin therapy for diabetics (tested on animals during the 1920s); penicillin (1940s); and the polio vaccine (1950s). More recently, animal testing has led to the development of so-called “cancer vaccines” that vaccinate against viruses such as hepatitis B (1980s) and human papillomavirus (2000s) that can cause certain types of cancers and diseases.

But what about animal testing that’s not saving anyone’s life? This is a considerable gray area for many people, who might abide animal testing for medical and drug research but condemn using animals to test cosmetics and household products. Careful consideration of whether and when animal testing is acceptable often leads to a range of nuanced opinions on the matter, with some people taking stances against animal testing in all circumstances and others taking a more inclusive stance.

But when I analyzed each of the portfolios using data from Sustainalytics, Morningstar’s global environmental, social, and governance data and research partner, we found that most of them do invest in many companies that test on animals. What gives? 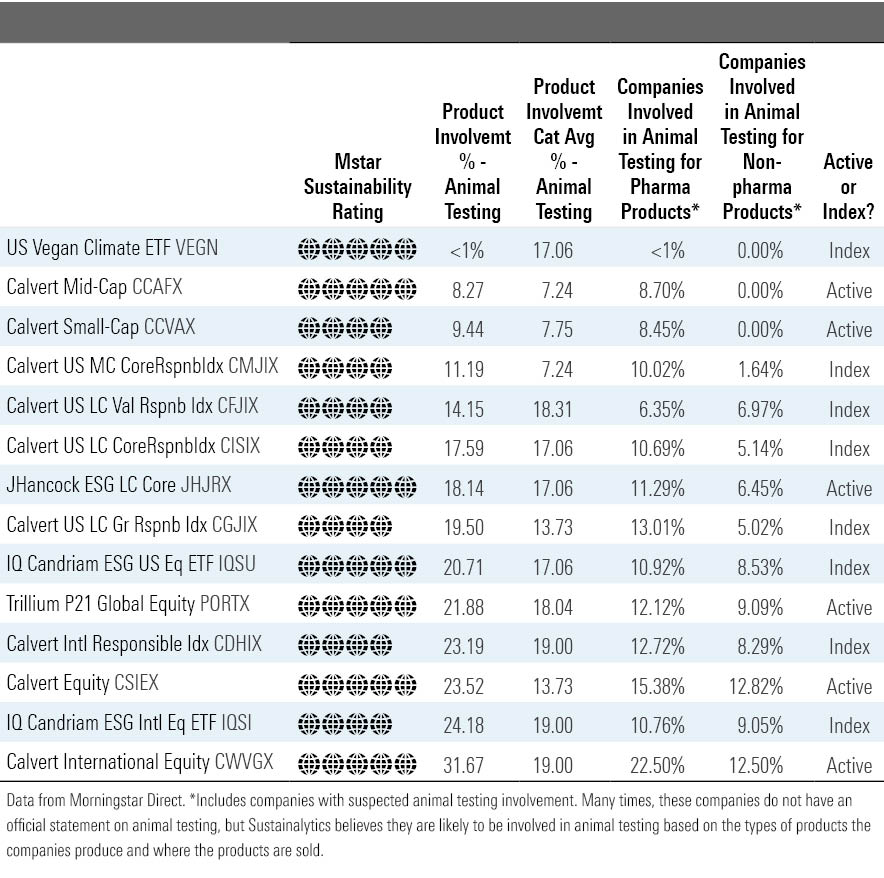 *To derive this list, I screened the Morningstar Direct database for U.S. funds that employ animal testing exclusions according to their prospectus language. I excluded funds that didn’t have Sustainalytics data available for at least 99% of their underlying holdings, which eliminated fixed-income and balanced funds and some funds in foreign stock categories.

My colleagues Chau Pham and Madison Sargis recently coauthored a research study that looked at funds that claim (by prospectus) to exclude companies that engage in activities that investors might find objectionable for ethical, religious, or other personal reasons (tobacco, firearms, adult entertainment, animal testing, and more).

When they looked at funds that claim to exclude companies that test on animals, they found that all but one fund breached those exclusions. A big reason for this, Pham and Sargis found, was that these aforementioned "gray areas" of animal testing ethics can lead to widely varying investment criteria.

Another issue is that there is no standard methodology or threshold for classifying business involvement in harmful practices. Morningstar and Sustainalytics take a conservative approach to identifying a company’s involvement in controversial issues--we use a lower threshold for identifying company "involvement" and a more comprehensive scope of consideration for related products and services and direct and indirect involvement. Pham and Sargis believe this increased sensitivity is in the best interest of investors; those with stricter preferences can feel confident that their assets are being allocated as intended, while those with greater tolerance for variability will simply be better informed about the exposure of their investments.

When funds consider different exclusionary methods and criteria, their portfolios can look vastly different from one another. Because of that, investors who want to limit their exposure to certain issues need to do their homework. Go beyond a fund’s disclosures and look at what’s actually in the fund’s portfolio before making investment decisions, Pham and Sargis recommend.

How to Get Under the Hood of a Fund That Opposes Animal Testing I chose the US Vegan Climate ETF (VEGN), which follows the strictest exclusion criteria I came across, to show investors how they can analyze a fund's portfolio.

According to the US Vegan Climate ETF's prospectus, it tracks an index that excludes companies that derive more than around 2% from products and services that are tested on animals or that use animals in research and development (including genetically engineered animals).

As you can see from the product involvement data point in the table above, the US Vegan Climate ETF actually does invest according to these criteria. According to Morningstar and Sustainalytics data, the portfolio has the lowest exposure to companies that test on animals in absolute terms, and its exposure is particularly low relative to other large-cap equity funds (which comprise most U.S. investors' core stock portfolio allocations).

Before you invest, though, make sure you know what you're getting: The US Vegan Climate ETF's portfolio is a good example of the potential downside of negative screening that investors may want to be aware of. When funds screen out all companies with exposure to animal testing and climate issues, the resulting portfolio is heavily concentrated in sectors that don’t have exposure to animal testing or climate issues. As you can see on this fund's Portfolio Tab, relative to a diversified category benchmark, the US Vegan Climate ETF has large concentrations in the financial services, communication services, and technology sectors and sizable underweightings in healthcare and energy. 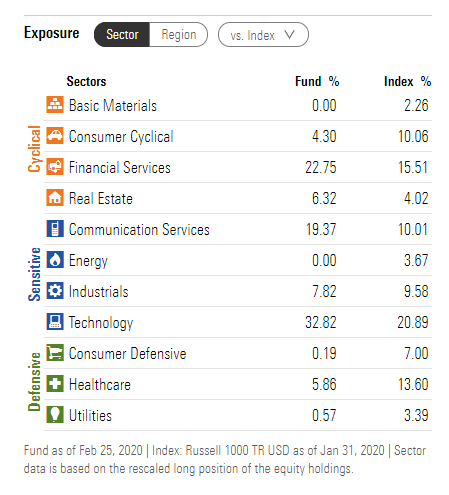 As explained in this primer on sustainable investing, funds that take a more inclusive approach to ESG factor integration are able to build portfolios whose sector weightings are more in line with diversified benchmarks and whose expected returns, therefore, are less likely to diverge meaningfully from their category peers or the benchmark.

A fund that takes a more integrative approach to animal testing might invest in some companies that test on animals, but it might avoid companies that use animals to test the safety and efficacy of cosmetics or household products. For instance, Calvert, a division of Eaton Vance that specializes in socially responsible investing, aims to exclude or have limited investment in companies that use animals in product testing without "countervailing social benefits such as the development of medical treatments to ease human suffering and disease."

Takeaways for Investors Who Want to Avoid Exposure to Animal Testing As my colleagues determined when they looked at portfolios of funds that aim to exclude companies that engage in controversial business activities, there is no universal set of exclusion criteria or agreed-upon thresholds for determining which businesses are considered to be "involved."

That is particularly true when it comes to funds that aim to avoid animal testing. Vastly different exclusion criteria can lead to wide variations among portfolios of funds that aim to avoid exposure to animal testing; in many cases, they might even have what Morningstar and Sustainalytics consider to be significant exposure to the intended exclusions.

Because the animal testing exclusion criteria employed by funds can be so nuanced, investors who want to avoid or limit exposure to the practice need to be especially discerning when it comes to choosing a fund. The Morningstar Sustainability Rating and ESG research and data are valuable tools that can help investors make more-informed decisions.

Karen Wallace does not own (actual or beneficial) shares in any of the securities mentioned above. Find out about Morningstar’s editorial policies.