Last week, the markets officially entered bear-market territory, and the coronavirus was officially declared a pandemic. Of course, the latter caused the former. Every day was extreme. In fact, the week had two of the 20 worst single-day losses and one of the 20 best all-time gains.

The bottom fell out of the markets. Stocks plunged, but this time high-quality bonds and precious metals fell, too. Only bear-market funds and money market funds were in the black. Long government bonds reversed course after staging a tremendous rally the prior week. Municipal bonds also tumbled.

The economies of Europe and the United States are grinding to a halt. If there are any green shoots of optimism, it's that South Korea and China appear to have turned the corner. South Korea reports that it's discharging more patients from hospitals than it is admitting. And China's factories are ramping up once more.

Fund Categories The turnaround in intermediate core bond funds left that Morningstar Category down 2.6% for the week, but it was still up 2.1% for the year. The intermediate core-plus bond category fell 4.1%, and high-yield dropped 6.7%. Even ultrashort bond declined 0.8%. Nontraditional bond funds, which might have been expected to zig when the market zagged, actually lost more than intermediate core. They fell 3.6% on average in the week. The sale in high-quality bonds was blamed on liquidity worries following some big sale orders. The decline in lower-quality credit was due to signs of economic weakness, especially in energy, which is a significant part of the high-yield market.

High-quality munis took it harder than high-quality taxable bonds. The muni-national intermediate category lost 4.3% in the week and is 1.5% in the red for the year. It was the worst week for muni bonds since 1987. Observers said that although fundamentals did decline, the sell-off had much more to do with illiquidity and forced selling.

The twin declines in stocks and bonds hit balanced funds hard. Until last week, they had rather mild losses, but the average allocation--50% to 70% equity fund lost 8.2% last week and is down 12.3% for the year.

In the U.S. Morningstar Style Box, small-value funds once again got the worst of it. They lost 16.5% and are down 31.5% for the year, 8.3% for the trailing three years, and 2.4% for the past five years. As has been the case for much of the past decade, large growth was the star. It lost 8.6% for the week but is still in the black for the trailing 12 months, unlike every other style box category.

The best-performing sector categories were communications and tech, which were down 9.1% and 10.6%, respectively.

Stepping back to look at 10-year returns, only the tech, health, and large-growth categories remain in double-digit territory. The categories that are in the red for 10 years include managed futures, equity energy, equity precious metals, and multicurrency. 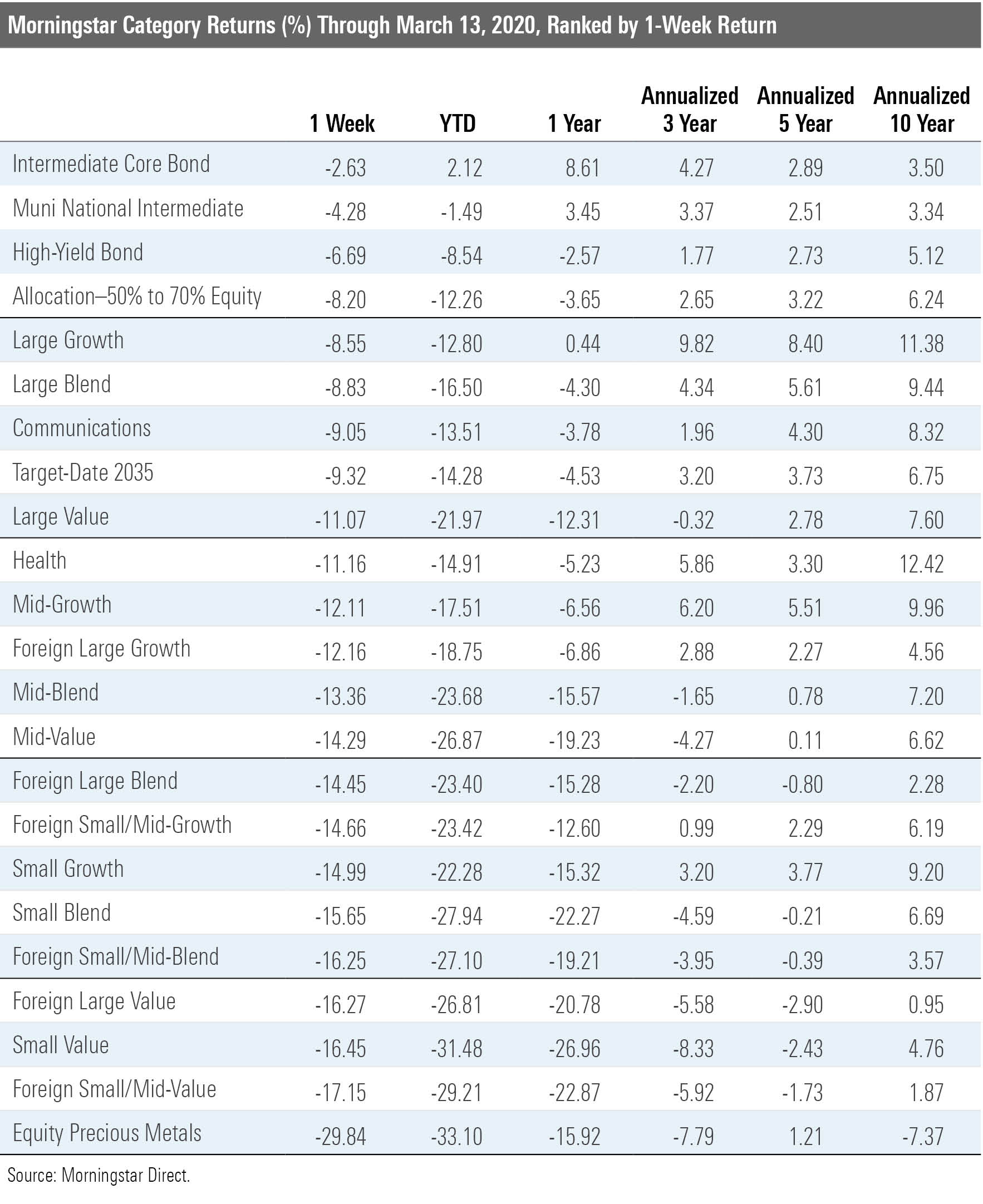 Fund Level Every single Morningstar 500 fund was in the red last week. Short-term bond funds like Vanguard Short-Term Federal (VSGBX) and FPA New Income (FPNIX) had very small losses of 0.1% and 0.5%, respectively. Vanguard Energy (VGENX), which dropped 23.5% and is down 41.3% for the year to date, held the bottom down. Deep-value fund Hotchkis & Wiley Mid-Cap Value (HWMAX) continued to rue its energy bet. The fund was down 20.5% for the week and 40.6% for the year. Both results were the worst of any mid-cap value fund.

Vanguard Selected Value (VASVX) also had a brutal week with a 17.9% loss.

Which funds were the heroes for the year to date? Four Morningstar 500 funds had top-percentile performances. TCW Total Return Bond (TGLMX) was up 4.2% thanks to timely moves to extend duration and load up heavily on government bonds. Akre Focus (AKREX) was down just 5.8% owing to a big 19% cash stake and an abundance of high-quality defensive names. Artisan Developing World (ARTYX) was down 7.1% because manager Lewis Kaufman has avoided energy and highly leveraged companies and has tilted toward developed-markets stocks. FPA International Value's (FPIVX) 35% cash stake held losses to 9.7% for the year to date.

Other funds with a cautious bent that were left behind in the rally showed they still could protect on the downside. Royce Special Equity (RYSEX), First Eagle Overseas (SGOVX), and Tweedy, Browne Global Value (TBGVX) were in the top 5%.

Some growth funds that I wouldn't consider to be particularly low-risk also held up well. MFS Growth (MFEGX) and T. Rowe Price New Horizons (PRNHX) were also top 5% for the year to date.

Primecap Odyssey Growth (POGRX) is a fairly aggressive fund, but it's been right so often that it's still a surprise to see it at the bottom of the rankings. Its 21.8% decline was due to travel stocks such as United Airlines (UAL) and Royal Caribbean (RCL).

Among those I might have expected to hold up better than they did were FPA Crescent (FPACX) and BNY Mellon Global Real Return (DRRAX). BNY Mellon Global Real Return was off 9.5%, placing it in the bottom quartile of the multialternative category. The fund has generally held up well in downturns and has been wary of an economic slowdown, so the poor performance is surprising. However, it often has a gold stake, and if it did in March, then that would explain the poor performance.

FPA Crescent has long excelled at playing defense with a big cash stake and an absolute return focus.  However, hefty weightings in basic materials and financials hurt the fund, leaving it with a 14.8% loss that is in the bottom 15% of the allocation--50% to 70% equity category.

The Flow Story So far, fund flows appear to have been pretty mild for equities in reaction to the sell-off. For the seven-day period ended March 11, U.S. equity funds actually had a net inflow of $3.3 billion, while foreign-equity funds had a $3.5 billion outflow. Taxable-bond funds had a sizable outflow of $11.4 billion, and muni-bond funds had an outflow of $1.9 billion. The data come with two caveats. First, weekly flows are a bit noisy. Second, target-date funds rebalance into declining assets and thus may be making individual investor moves look milder than they are.

What Should You Do With Your Portfolio? I hate to raise a question that I can't answer very well, but here are a couple of thoughts. Markets are always unpredictable, but that goes double for a situation as rare as a pandemic. What you do know is your goals and your plan. If those haven't changed, then stay on course.

So far, I've taken no action in my portfolio. I did raise my 401(k) contribution rate a couple of percentage points. That means at the end of March I will be investing slightly more than the usual amount. That's pretty close to doing nothing. In short, don't touch your face or your portfolio.

Read the latest on how the coronavirus is rattling the markets and what investors can do to navigate it. Take Me There

Russel Kinnel has a position in the following securities mentioned above: VASVX, RYSEX. Find out about Morningstar’s editorial policies.