Editor's note: This article is part of our Women and Investing special report.

The state of women in the investment industry and corporate world is still nascent--but some areas are poised for growth.

Using its proprietary databases, Morningstar has examined how women are faring today. Women remain dramatically underrepresented among the ranks of mutual fund managers. Yet the fund industry itself acknowledges the advantages of institutional diversity: It has become a significant advocate for diversity at the publicly traded corporations it invests in. That kind of shareholder engagement, combined with a recent legislative mandate, is beginning to show results in increased numbers of women on U.S. corporate boards. Meanwhile, although women-led startups still receive a disproportionately small share of venture capital, they are breaking into the system.

The Fund Industry Falls Short When it comes to gender diversity, the global fund industry looks much like it did 20 years ago:

That’s the latest finding from Morningstar’s quantitative research group. Associate director Madison Sargis and associate analyst Amrutha Alladi recently updated some of the numbers underlying Sargis’ 2016 white paper, “Fund Managers by Gender: The Global Landscape.” Harnessing Morningstar’s global database of funds registered in 56 countries, they determined the gender of more than 25,000 fund managers using information provided by fund companies when available and a proprietary algorithm that assigns a probability of a manager name being a woman’s based on local census data.

There are geographic bright spots, mostly in smaller markets, including Hong Kong, Singapore, and Spain, where more than 20% of fund managers are women. However, some of the largest financial centers remain below the global average, including the United Kingdom (13%) and the United States (11%).

Morningstar’s U.K. team encapsulated the imbalance neatly with this recent headline: “More Funds Run by Daves Than Women.” That is, there were 108 U.K. funds run by managers named David or Dave in Morningstar Direct—and only 105 funds run by women of any name. 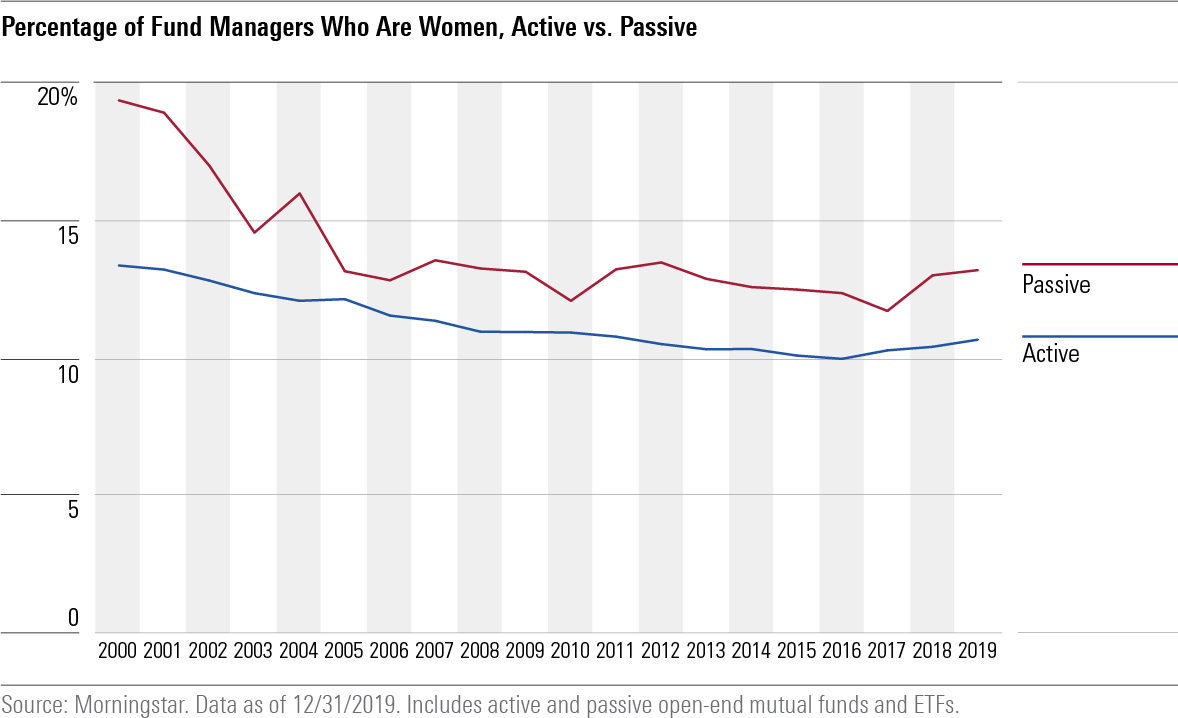 Similarly, the fixed-income universe of funds was once a relatively bright spot: Women fund managers made up 16.0% of bond-fund managers in 2000, compared with 12.9% of equity fund managers. That edge had vanished by 2019, when the percentage in both cases was roughly 11%. 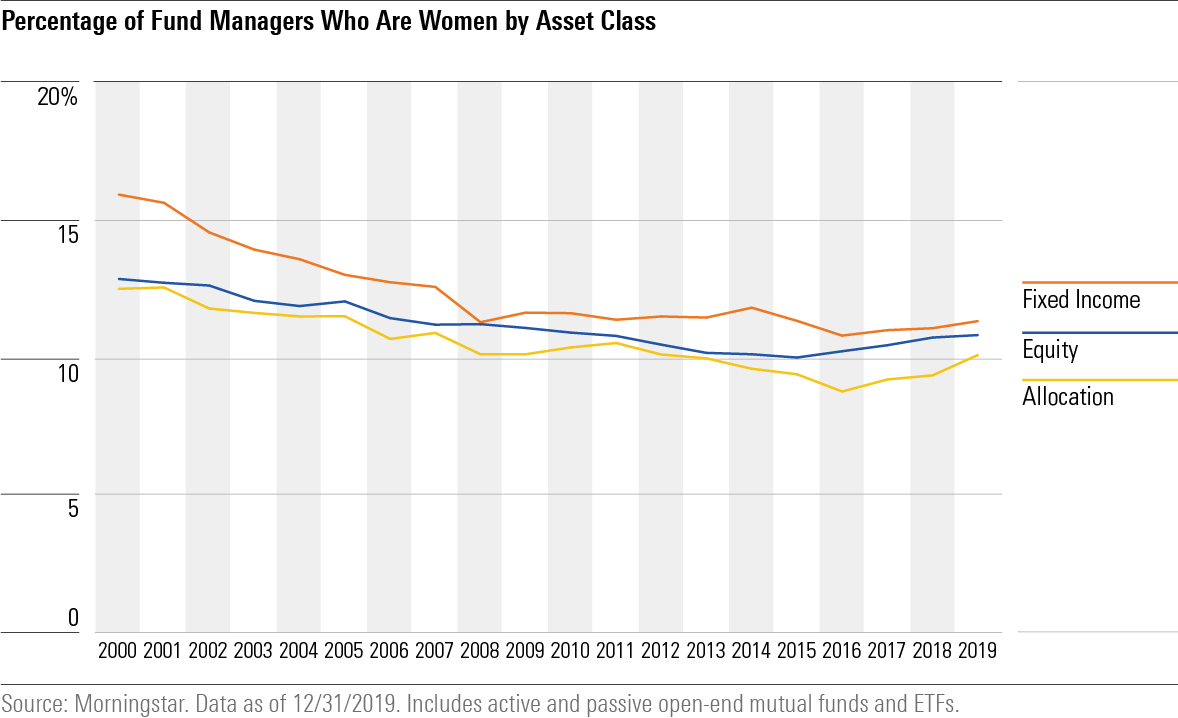 The gender gap is a chasm in the fund industry. The cause is likely a complicated combination of structural barriers and implicit biases. But it has nothing to do with ability, as Sargis and colleague Kathryn Wing demonstrated in a 2018 study showing that the gender of fund managers doesn’t affect investment performance.

Calling Corporations to Account Meanwhile, a growing body of research suggests that the presence of women on corporate boards and in the C-suite is linked to superior financial performance. (See, for example, “The CS Gender 3000” report.) That may be one reason that fund companies themselves are pushing for diversity at the companies they invest in.

Morningstar’s Jackie Cook and Jon Hale recently published an in-depth report on how the 50 largest U.S. fund companies--influential stewards of equity capital--have voted on shareholder proposals focused on transparency and governance of sustainability risks. They found that asset-manager proxy voting support for resolutions related to environmental, social, and governance issues increased considerably, with average support at 46% today, up from 27% five years ago. Support for diversity resolutions was significantly higher than that. 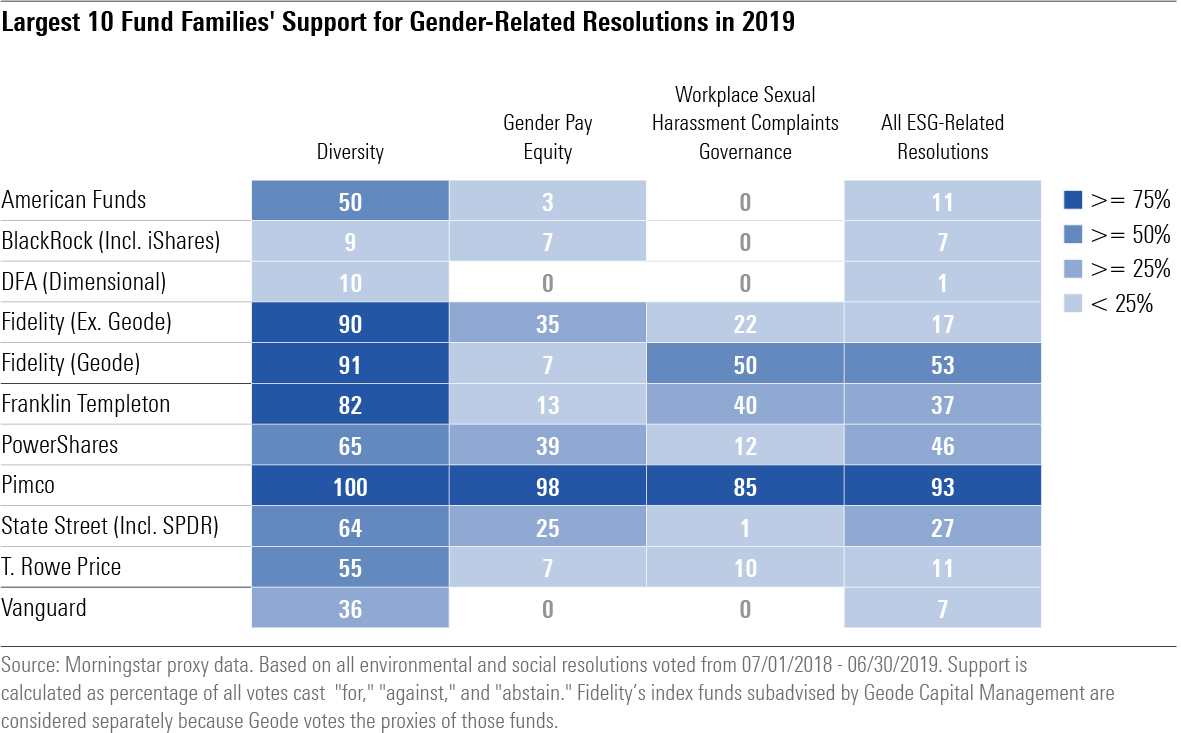 Gender pay equity resolutions--requesting companies to disclose their median gender pay gaps and steps taken to reduce gender-based pay differences--earned support from asset managers 48% of the time. Of the 10 largest fund groups, Pimco voted almost unanimously for gender-pay equity resolutions, while DFA and Vanguard failed to support any of the resolutions.

Governance of workplace sexual harassment complaints is a new issue on U.S. company ballots. Fund groups supported these resolutions 41% of the time, less than the average for ESG issues overall. Cook and Hale found that these votes were not as strongly correlated with either diversity or with gender pay equity disclosure requests as might be expected, given that the three issue types share a focus on a workplace culture of inclusivity.

Workplace harassment is an emerging concern, so many investors may not have yet articulated a voting position on resolutions addressing it. However, the governance of allegations of workplace sexual harassment and discrimination is becoming an important reputational concern for investors, particularly at technology companies. Three of the 10 sexual harassment resolutions in the 2019 proxy season were directed at tech giants: two at Google parent Alphabet (GOOGL) and one at Amazon.com (AMZN).

This and other ESG risks are of growing concern to asset managers. Diversity and inclusivity are material factors in determining a company’s ability to navigate new risks, attract talent and investment, and, ultimately, to build sustainable profits. Morningstar’s own equity analysts contend that corporations with the ability to tackle ESG risks strengthen their long-term competitive advantages.

Boards Branch Out to Meet Demand Even as asset managers are increasingly encouraging corporations to improve diversity, Morningstar’s equity data shows that corporate boards are steadily becoming more gender diverse. In 2000, 11% of directors of companies in the Morningstar US Market TR USD index were women. Representation of women had doubled to 22% by the end of 2018, according to the most recent available data.

The uptick in 2018 may have been in anticipation of the signing of California’s Board Gender Diversity law in September of that year. It mandated that every public company headquartered in the state have at least one female director by the end of 2019. The requirement steepens by the end of 2021, when boards with five members must have at least two female directors, and boards with six or more members must include at least three women. This kind of legislation is a first in the U.S. but has been adopted in various forms by other countries since Norway first spearheaded gender quotas for boards in 2003. 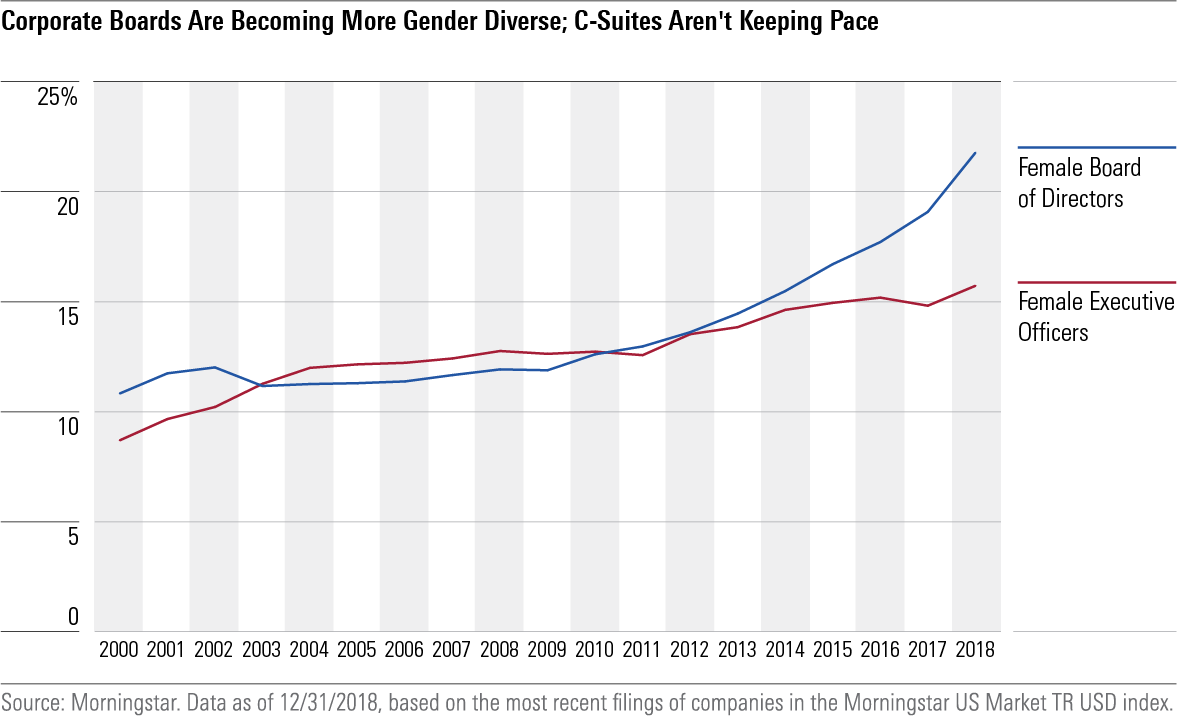 The drive to diversify boards means that qualified women are in high demand. Executives feed the pool of potential directors, yet women make up only a fraction of public company senior management positions. That percentage has barely increased in recent years. Corporate boards have been drawing from a relatively small pool of women who meet traditional standards.

That means women are more likely to be called upon for double duty. Sargis’ latest research shows that women continue to serve on more boards than men do. Based on the most recent available data, in 2018 the typical female director served on 1.3 boards, compared with 1.2 for the typical male director.

As the demand for gender diversity continues to increase--driven both by legislation and shareholder engagement--boards may increasingly look beyond the C-suite to fill seats, seeking candidates with academic, legal, or government experience, and other relevant professional backgrounds. That would enhance diversity of perspective even further at a time when companies face new risks requiring new kinds of board competence.

Building Diversity From the Bottom Up Setting out on your own is one way to bypass roadblocks that may exist in established corporate environments. However, female founders receive a disproportionately small share of venture capital committed to startups. Morningstar subsidiary PitchBook found that VC investment into U.S. companies where at least one founder was a woman set a record for capital raised in 2019 at $18.3 billion, 14.2% of the total deal value. Only 2.7% went to all-female founding teams, however.

Venture capital is a high-risk asset class, says PitchBook senior analyst Alex Lykken, and VC investors must make subjective decisions when deciding which companies to back. When sizing up founders, familiarity breeds comfort. Indeed, studies suggest that female VCs are twice as likely as male investors to invest in startups founded by women. But only about 12% of current check-writers are women. Increasing that percentage would likely increase the number of female-founded startups getting venture capital. In turn, VC pools would be exposed to more opportunities and more markets.

In the upcoming issue of Morningstar magazine, Lykken and analyst Adam Putz demonstrate how diversity benefits the VC ecosystem.

Laura Lallos has a position in the following securities mentioned above: AMZN, GOOGL. Find out about Morningstar’s editorial policies.