This article is part of Portfolio Makeover Week 2019.

“My primary plan is centered around security,” he wrote.

At age 31, he has embarked on a career in the telecommunications arena, and is also completing his MBA.

Like many people their ages, Justin and Mackenzie are balancing a desire to get started early on retirement savings against a number of short- and intermediate-term goals. They’d like to get married within the next few years and they’re saving for a home together. Amassing a healthy down payment is no small feat, though, given that they live in an area of the country where prices have escalated sharply in recent years. Additionally, he and Mackenzie would like to start a family eventually; recognizing the heavy lift that college funding is, they would like to prioritize a college fund.

Justin would also like to purchase a rental property that will provide him with an ongoing stream of income. Last but not least, Justin expects that his parents and grandparents may eventually require some financial help in their retirements; he’d like to be able to provide an assist if he is able.

“[My parents] are not very good with finances and I don't expect them to have much when they reach retirement age,” he wrote.

Given that they’re juggling so many goals, Justin wrote seeking a second opinion on the positioning of his and Mackenzie’s portfolios. Justin is also rethinking the conservative positioning of his 401(k). “I'm familiar with Modern Portfolio Theory and know I should be 80%-100% equity due to my long time horizon,“ he wrote, “[But I] can't bring myself to go more risky than a 50/50 portfolio.” 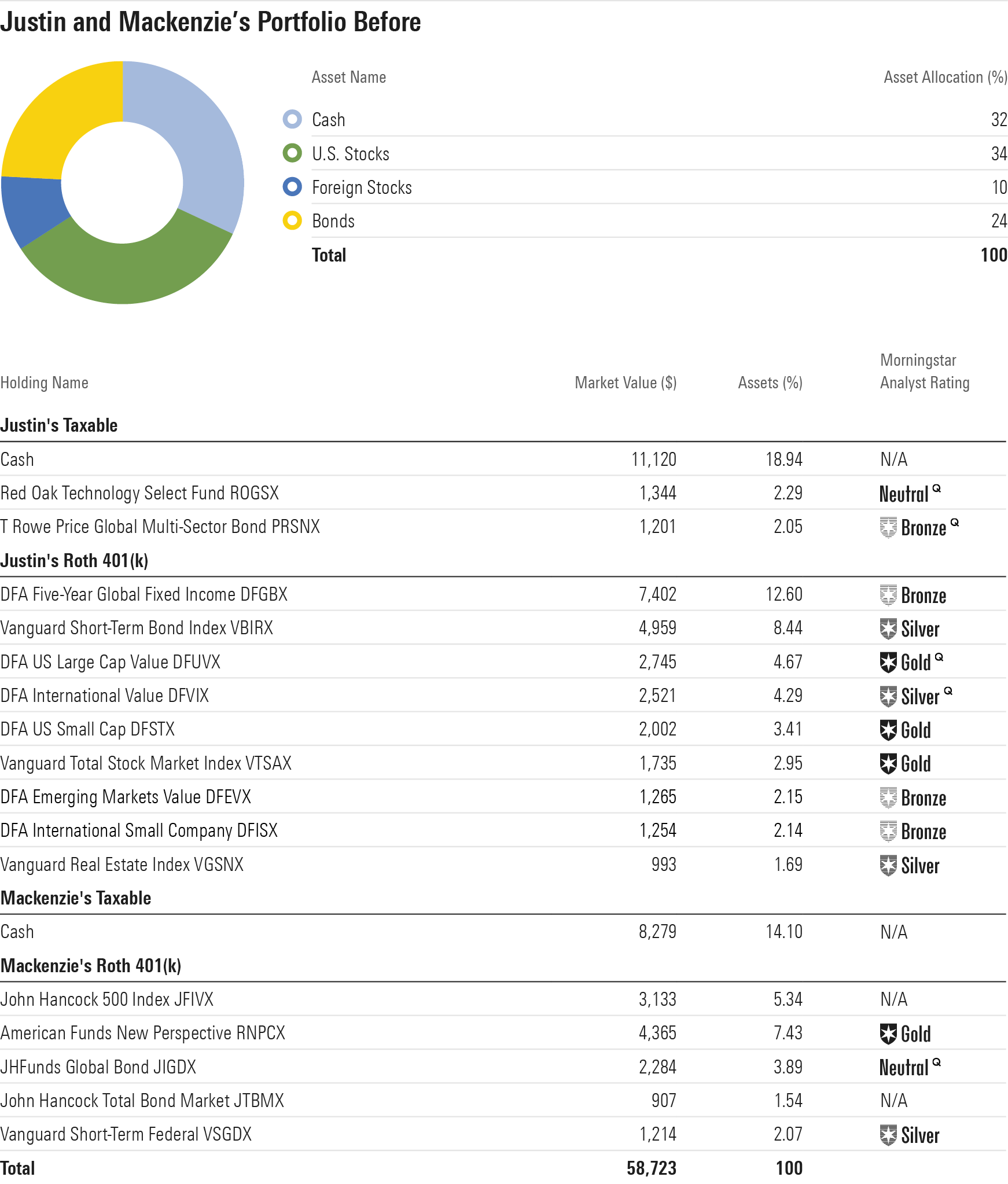 The Before Portfolio Because short-term savings is a goal and Justin’s 401(k) portfolio is somewhat conservative, he and Mackenzie’s total portfolio includes one third of its assets in cash and another 24% in bonds. The remainder is in equities.

Justin’s 401(k) is the largest pool of assets. He makes a Roth contribution to his account and has relied on a professionally managed asset-allocation mix; right now it includes about 40% in cash and bonds and the remainder in stock funds. That portion of the portfolio is very low-cost, consisting of Vanguard and DFA funds; its asset-weighted expense ratio is just 0.19%. Given the low costs, high-caliber investment options, and generous matching arrangement, this is a topnotch plan.

John Hancock oversees Mackenzie’s 401(k); she holds the bulk of her portfolio in a John Hancock-managed S&P 500 tracker and American Funds New Perspective (RNPCX), a world-stock fund. She also has three smaller positions in bond funds. In contrast with Justin’s plan, Mackenzie’s is very high-cost. The S&P 500 fund that she’s invested in charges 0.64%, and many of the actively managed funds--including the target-date series managed by American Century--charge more than 1% per year.

Justin and Mackenzie both have taxable holdings as well. Mackenzie’s account is all in cash, whereas Justin holds cash as well as a technology-sector and world-bond fund. 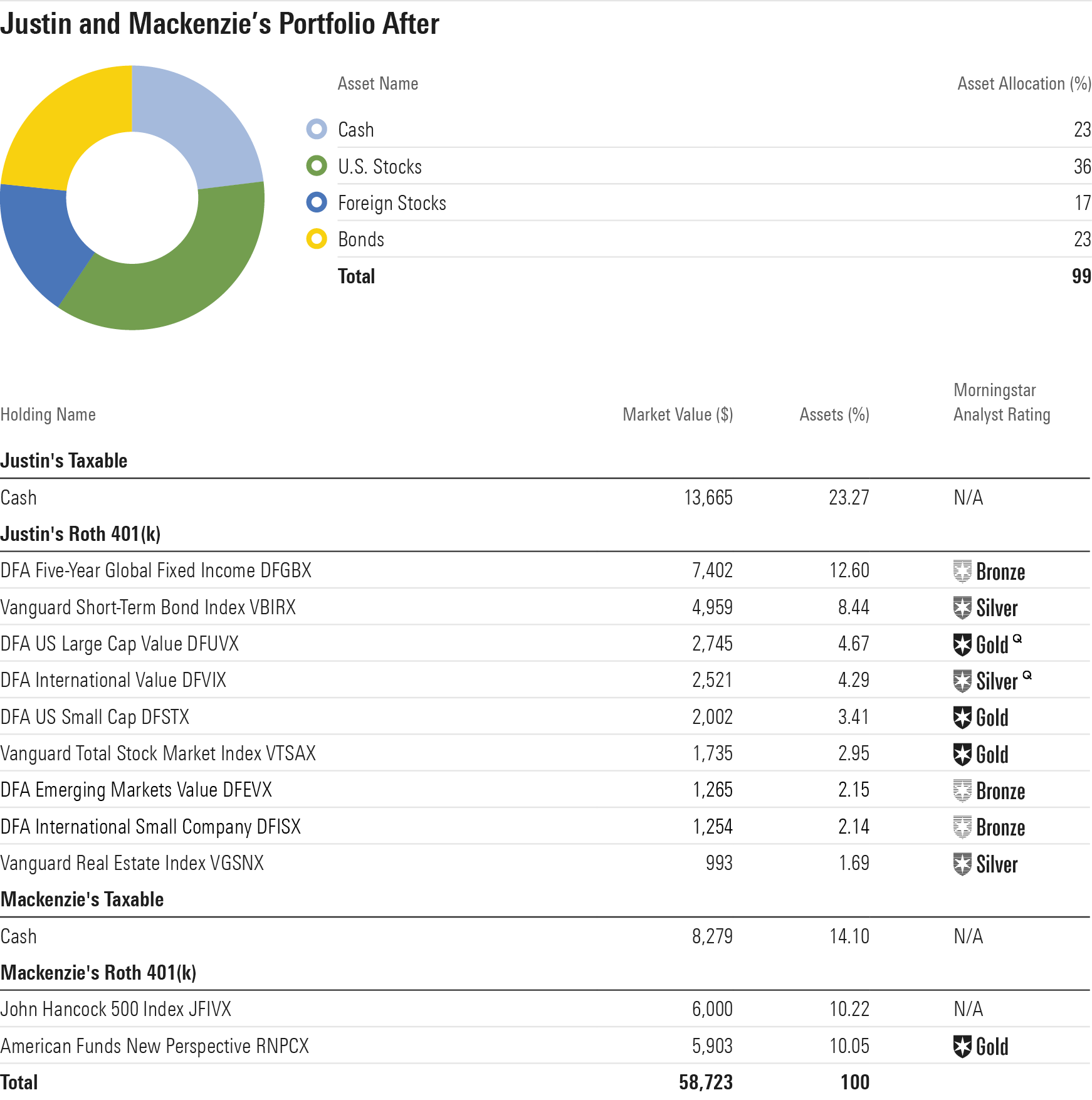 The After Portfolio Given that their taxable accounts are largely geared toward short- and intermediate-term savings--most imminently, a home down payment--my bias is to not take any risks with this part of their portfolio. As a result, my "After" portfolio jettisons Justin’s technology and world-bond funds. If Justin wants to generate a higher return, he should shop around for a high-yield savings account.

In addition to amassing cash for their home purchase, Justin and Mackenzie should maintain an emergency fund on an ongoing basis, equivalent to at least three months’ worth of living expenses. They can hold those funds in their taxable accounts or, alternatively, in Roth IRAs in each of their names. Roth IRAs allow for tax- and penalty-free withdrawals of contributions at any time and for any reason, so they’re a good multitasking vehicle for young savers who want to build up emergency reserves while simultaneously saving for retirement.

Justin is questioning his decision to invest in the moderate target-risk portfolio available through his 401(k). One way to address this is would be to maintain his existing holdings but direct new contributions to a more aggressive asset-allocation mix. Given that he has employed the moderate mix for the past few years, it doesn’t make sense to abandon it entirely now. But steering new contributions to a more stock-heavy portfolio allocation will help ensure that he’s adding substantially to stocks if they encounter a period of weakness, in turn boosting the portfolio’s long-term returns.

Because Mackenzie’s 401(k) plan is high-cost, my bias would be to contribute just enough to earn employer matching funds. She can then direct any additional savings into a Roth IRA, which will give her the latitude to invest in lower-cost, better-quality investment options. A high-quality target-date fund like Vanguard Target Retirement 2055 (VFFVX) would be a solid, low-maintenance choice; it charges just 0.15% per year. She can put those Roth IRA contributions on autopilot, too, so that they’re deducted from her bank account on a prescheduled basis, much like a 401(k).

Any contributions she has already made will have to stay behind in her 401(k). I like the idea of splitting her existing funds and future contributions nearly evenly between the S&P 500 tracker and American Funds New Perspective; at this life stage, she needs growth more than she does the stability that accompanies bonds.

Finally, my bias would be to backburner the other financial goals, especially purchasing rental property, at least until the rest of their financial plans are further along. While rental property and the income may seem like a decent way to grow income, it can also bring headaches, including repair costs and tenant issues.

Prioritizing retirement savings, growing their human capital with further education, building out their emergency fund, and funding a home purchase should take precedence over the other financial goals at this time. Although Justin and Mackenzie are still very young, their retirement savings are arguably a bit behind where they should be at this life stage. Thus, it makes sense to direct a healthy share of any future salary increases they receive to their retirement accounts. Because Justin is contributing to his 401(k), he may be able to select “auto-escalation,” meaning that his contribution will increase automatically as his salary increases.