Morningstar Analyst Ratings for college savings plans are back in session. Each year, we rate plans across five key pillars: Process, People, Parent, Price, and Performance. In October 2019, Morningstar assigned analyst ratings to 62 plans, which represent more than 97% of assets invested in 529 plans. Our analysts upgraded nine plans and downgraded eight.

Morningstar identified 30 best-in-class plans, assigning these programs Morningstar Analyst Ratings of Gold, Silver, or Bronze. College savers invested in a medalist-rated plan have made a fine choice. These plans generally follow industry best practices, offering a combination of the following attractive features: a well-researched asset-allocation approach, a robust process for selecting underlying investments, an appropriate set of options to meet investor needs, strong oversight from the state and investment manager, and low fees. These features increase the likelihood that a plan will remain a strong pick for college savers. Gold-rated plans exemplify most or all of these attributes, while Silver- and Bronze-rated plans embody some of these qualities but have room for improvement.

Five plans didn’t score so well on our report card, receiving Negative ratings this year. Negative-rated plans have at least one flaw that makes them worth avoiding for most college savers, such as an unstable investment team or high fees.

Twenty-seven plans earned Neutral ratings. While not recommended for out-of-state investors, some of these plans may make the grade for in-state residents because of potential added benefits, such as state income tax breaks, which don’t factor into our ratings. Residents of a state with a Neutral-rated plan should study any tax incentives they receive from their state before deciding to look further afield, though participants are not required to invest in their state’s plan.

The Valedictorians Four plans merit Gold ratings. These plans stand out for their low costs, strong stewardship, and exceptional investment options. We upgraded the rating for California’s ScholarShare College Savings Plan to Gold in 2019, as its board voted to move to its age-based portfolios to a progressive glide path in February 2020. That’s an industry best practice, as it smooths the transition from stocks to bonds and reduces the risk of making a large shift out of equities just after a market dip, when there's the potential to lock in losses. The plan’s portfolios also rank among the most affordable in the industry within their respective categories.

Virginia’s Invest529, Illinois’ Bright Start College Savings, and Utah’s my529 continue to distinguish themselves from other plans for their excellent state oversight and program management, best-in-class investment options, and thoughtful investment philosophy. These plans have stayed ahead of their peers by innovating in areas where most 529 plans aren’t--for instance, Virginia’s Invest529 plan replaced its actively managed REIT fund with a combination of two direct real estate sleeves and a passively managed fund to temper volatility, and Utah’s my529 plan enhanced its principal protection options at the end of the age-based glide path where balances are highest. But this group of Gold-rated plans also hasn’t fixed what isn’t broken: Each plan features asset allocation that remains consistent and well-reasoned. Both in-state residents and out-of-staters will not go wrong by investing in one of these three plans.

Fidelity and Vanguard Make Magna Cum Laude The class of Silver-rated plans saw some shakeups. Four nearly identical plans managed by Fidelity were upgraded to Silver from Bronze after phasing out Fidelity’s most expensive age-based options and adding a new blended track that combined active and passive management. This move resulted in less-expensive offerings on average. New York’s direct-sold 529 Program, which is managed by Ascensus and Vanguard, earned a rating upgrade to Silver from Bronze after adopting Vanguard’s recommendation to increase its exposure to diversifying asset classes like international stocks and bonds. At 0.13%, New York offers the fifth-cheapest age-based tracks of 529 plans under Morningstar’s coverage. 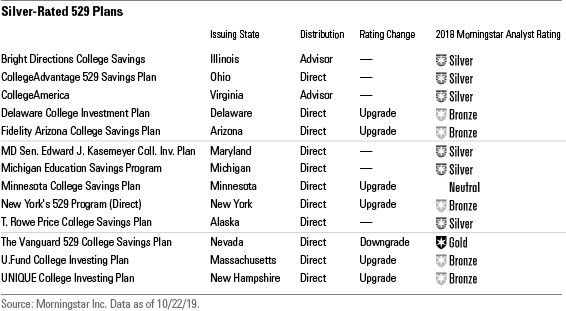 Meanwhile, Nevada’s The Vanguard 529 College Savings Plan failed to make the cut for a Gold rating for the first time since 2012, when Morningstar first debuted its medalist designation for college savings plans. As the industry continues to lower fees, Nevada’s fees remain below average but haven’t kept pace with the cheapest plans, so the plan no longer warrants Morningstar’s highest rating. At Silver, we still highly recommend it, owing to its lineup of stellar underlying Vanguard index funds and relatively smooth transition from stocks to bonds within the age-based portfolios.

Most Improved Two plans stand out for improvements they made over the past year. The Florida 529 Savings Plan rose to Bronze from Negative, and Minnesota’s College Savings Plan jumped to Silver from Neutral.

Florida wiped the slate clean, lowering fees and smoothing the glide path of its age-based portfolios by reducing the stock allocation 16 times as the beneficiary ages, up from five in 2018. Our confidence in the state’s oversight has improved following the widespread positive changes. Like California, Minnesota plans to roll out a progressive glide path for its age-based portfolios. Minnesota also opened up its plan to include investment managers other than program manager TIAA-CREF, picking high-quality passive and active strategies from Vanguard and DFA, all while lowering costs. These enhancements make it an attractive option for residents and nonresidents alike. 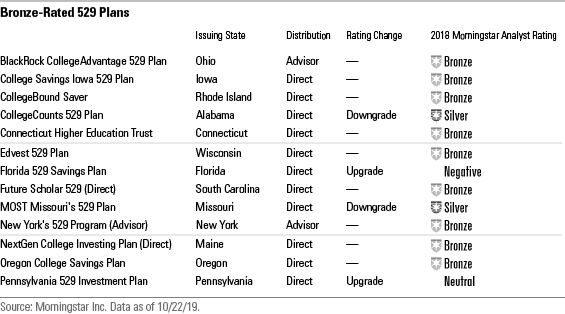 Meeting Expectations Some plans previously made the cut for a Bronze rating but no longer do. Morningstar downgraded four to Neutral from Bronze. Colorado Scholar’s Choice no longer merits a Bronze rating; its investment lineup remains adequate but hasn’t improved as much as peers’. We also downgraded Indiana’s CollegeChoice direct- and advisor-sold plans. Although Indiana residents should stick with those options given their exceptional tax benefits, both plans levy high fees that out-of-state residents who don’t qualify for the tax benefit will struggle to overcome. 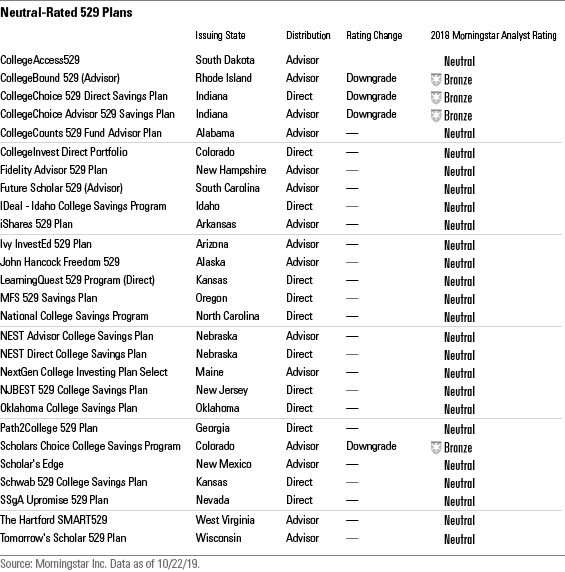 Five Plans Flunk Out We downgraded Nevada’s USAA College Savings Plan to a Negative rating from Neutral following rapid change to the plan’s investment options and the state’s limited ability to review the investment changes. In July 2019, Victory Capital Holdings purchased USAA’s asset-management business, including its 529 plan. After the transaction, Victory promptly added its managers to all the underlying equity funds in the plan before the state was able to thoroughly vet the changes.

Plans that haven’t kept pace with the industry’s dizzying fee cuts also look unattractive, and there's little incentive for even in-state college savers to stay close to home when similar fare is offered at a much more palatable price elsewhere. Two plans overseen by a partnership between Vanguard and Ascensus continue to earn Negative ratings because of excessively high and stagnant fees layered on top of Vanguard's typically low-cost index funds. Prices depend somewhat on scale, or assets in the plan, and Arkansas and North Dakota are relatively small 529 plans, which explains the high program management fees--although that’s little solace to college savers. The Arkansas GIFT College Investing Plan and North Dakota's College SAVE have similar investment lineups and investment processes as other plans that use Vanguard as the investment manager. Similarly, Nebraska’s TD Ameritrade 529 College Savings Plan offers comparable investments to Nebraska’s NEST Direct-Sold Plan, yet continues to charge a sub-administration fee for TD Ameritrade of 0.19%.

Process: Did the plan hire an experienced asset allocator to design a thoughtful, well-diversified glide path for the age-based portfolios? What suite of investment options is offered?

People: What is Morningstar's assessment of the underlying money managers' talent, tenure, and resources?

Parent: Are the program manager and investment manager good caretakers of college savers' capital? Is the state managing the plan professionally?

Performance: Have the plan's options earned their keep with solid risk-adjusted returns over relevant time periods?

Price: Are the investment options a good value?

Learn more about the trends behind these ratings movements in Morningstar’s 529 Landscape Report. Get My Copy