The Morningstar U.S. Communications Services Index (Exhibit 1) continues to handily outperform the broader market, gaining nearly 9% over the past three months. Traditional phone companies AT&T (T) and Verizon (VZ), along with cable giant Comcast (CMCSA), dominate the index and largely dictate its direction. All three stocks have performed well recently, but AT&T has been the standout. Market sentiment around AT&T has gradually improved during 2019, helped by falling interest rates, but the shares received an additional lift on the involvement of activist hedge fund Elliott Management. 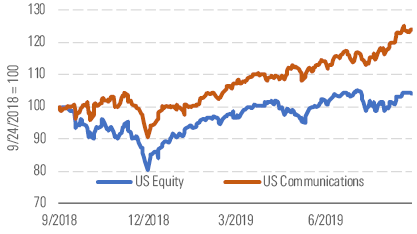