After investment-grade corporate credit spreads hit their widest levels of the year two weeks ago, the corporate bond market exhibited a modest rally last week and tightened 3 basis points to +113. In the high-yield market, the average spread of the BofA Merrill Lynch High Yield Master Index tightened 9 basis points, but at +340 basis points, it remains near its average this year. While corporate bonds only eked out a modest rally, the S&P 500 rose 2.41% last week, bringing that index into positive territory for the year. Oil rose to over $70 per barrel early in the week and held above $70 for the first time since November 2014. At that point, instead of riding an uptrend as it is now, the price of oil was plummeting from its highs of over $100. Several weeks ago, Andy O'Conor, the Morningstar Credit Ratings analyst who covers the energy sector, noted that officials in Saudi Arabia had begun to hint to the markets that they would be comfortable with oil closer to $80 per barrel. Since then, oil has risen from the low to mid-$60s and appears positioned to move higher as we swing into the summer driving season. Higher oil prices have bolstered corporate bonds in the energy sector, especially among the lower-rated issuers. In the investment-grade index, the average credit spread of the energy sector tightened 4 basis points last week; in the high-yield index, the energy sector tightened 20 basis points. 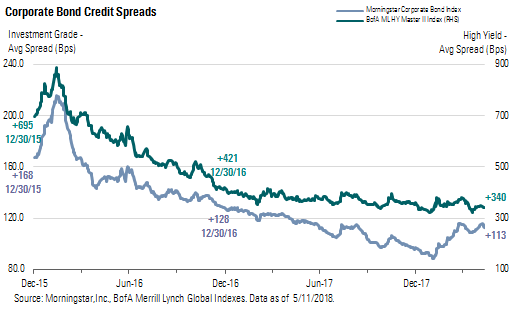