Introduction When the first U.S. target-date mutual fund debuted in 1994, it marked a notable advance. At the time, investors seeking an all-in-one portfolio could buy “target-risk” funds that maintained a steady asset allocation. But because the mix didn’t change, investors would have to occasionally reconsider the target-risk fund’s allocation and, if it no longer suited, replace it with something else. Not only was this a hassle, it courted risk, as investors tend not to excel when faced with buy and sell decisions.

Target-date funds innovated on this by introducing the “glide path,” which automatically adjusted the asset mix over time as the fund approached its target date. Thus, investors wouldn’t have to tinker with asset allocation or fund selection and, in theory at least, could focus instead on contributing and occasionally monitoring the fund’s appropriateness.

This relatively simple, low-maintenance concept has been a big hit with retirement-plan sponsors and participants. Indeed, many sponsors now auto-enroll plan participants and direct their contributions to target-date funds they’ve designated as their plan’s default options. As a result, target-date funds’ assets have swelled dramatically—the funds held nearly $1.2 trillion in assets as of Jan. 31, 2018, a roughly sixfold increase from a decade ago. 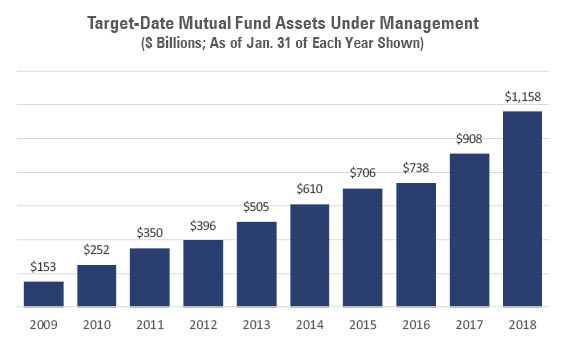 To be sure, that’s made target-date funds a bonanza for the fund companies that offer the most popular series. But the question is whether target-date funds have also well-served the many investors using them, a question we further explore below.

Defining "Investor Success" To gauge investors’ success using target-date funds, we first must define “success.” For purposes of this study, we’ve defined it as investors’ ability to capture as much of a target-date fund’s total returns as possible. To assess that, we compared target-date funds’ dollar-weighted returns with their stated (that is, “total”) returns over the period March 1994 through January 2018. We examined all share classes of every target-date fund that existed, including those that later died (through merger or liquidation).

To review, a fund’s dollar-weighted return is an estimate of how the average dollar invested in it performed over time, taking into consideration the magnitude and timing of any cash flows into or out of the fund during that period. The fund’s stated, or “time-weighted,” return is the return of a lump-sum investment made at the beginning of the period and held to the end.

Comparing the two types of returns yields a sense of how opportunely investors timed their purchases and sales of a fund. When investors impulsively buy high and sell low, the average dollar they invest returns less than the fund itself, resulting in a negative difference, or negative “behavior gap.” Conversely, when they shrewdly buy low and sell high, the average dollar they invest outpaces the fund’s return, producing a positive difference, or positive “behavior gap.”

For further details on how we conducted this analysis, see the endnotes to this piece.

Key Findings Our research finds that investors succeeded in capturing most of target-date funds’ total returns over the nearly 24-year span we examined.

From March 1994 to January 2018, target-date fund investors’ dollar-weighted average returns lagged the funds’ stated returns by 0.38% per year. While this represents a negative behavior gap, it’s fairly modest, especially when compared with the behavior gaps our research has found in other asset classes over time. 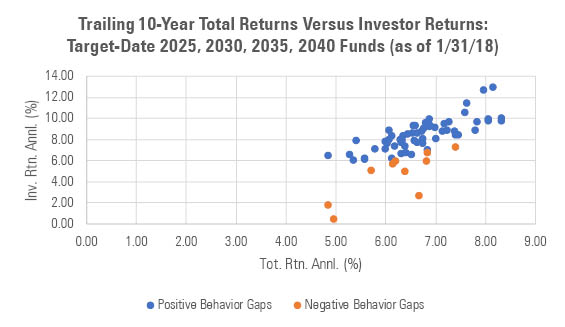 While it appears that investors in the nearer-dated 2010 and 2020 target-date fund series experienced larger shortfalls, this is probably less a function of behavior than necessity. After all, investors in these funds were likely in or approaching retirement and thus likelier to redeem assets to fund their retirement needs or for other reasons. Those redemptions came amid a generally rising market and thus likely dampened the funds’ dollar-weighted returns when compared with their stated returns.

By contrast, investors in the 2030 and 2040 series saw modestly negative or even positive behavior gaps, an encouraging sign given the popularity of these funds in retirement plans.

In the remainder of this piece, we delve more deeply into the data.

Behavior Gaps: Trends In examining the investor-return data more closely, one finds that the behavior gap can vary widely depending on the starting and ending point of the five-year period concerned. To illustrate, Exhibit 3 plots the average annual percentage behavior gap of all target-date funds for every 60-month period between March 1994 and January 2018. Note: The dates shown on the x-axis represent the starting point of each rolling 60-month period. Source: Morningstar Analysts.

As we can see, the behavior gap has fluctuated, with shortfalls of 2% to 4% common in the rolling periods ended in the mid-to-late 1990s, when target-date funds were more-or-less in their infancy. The early 2000s saw a marked improvement, as target-date fund investors earned more, on average, than the underlying funds. But the bottom fell out amid the financial crisis, with wide behavior gaps opening as the market plummeted, only to reverse and stabilize as the ensuing bull market took hold. The chart below shows a distribution of all rolling 60-month periods by range of behavior gap. At first glance, it might be tempting to chalk-up these swings in the behavior gap to investors' impulsiveness. But in reality, target-date fund investors appear to have been the picture of consistency during this time frame, as shown below. Although growth of target-date funds has cooled from the blistering pace set earlier last decade, investors don’t appear to have wavered in contributing to them. In fact, target-date funds as a group have received positive net inflows (that is, investors have put more into them than they’ve taken out of them) in all but seven of the 287 months from March 1994 through January 2018.

Moreover, where there were heavier outflows, they tended to be confined to funds approaching or at the target retirement date, such as 2010 and 2015 funds. In these instances, the redemptions are more likely a function of life-stage, with target-date fund investors withdrawing funds to support spending in retirement, rather than sentiment.

Recent Behavior It appears this continued influx of cash to target-date funds amid a rising market has burnished the funds’ recent dollar-weighted returns and shrunk behavior gaps. To illustrate, the chart below plots the total (y-axis) and dollar-weighted (x-axis; also known as “investor returns”) returns of the 68 unique target-date 2025, 2030, 2035, and 2040 funds that had 10-year returns as of Jan. 31, 2018. We chose funds in these target-date categories because they’re among the most popular with investors; all told, funds in these categories were home to $658 billion in assets as of Jan. 31. 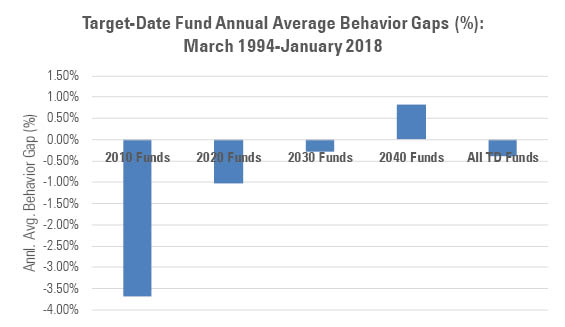 As shown, 58 of the 68 funds had positive behavior gaps—that is, the return on the average dollar invested in the fund exceeded the fund’s stated return.

When we widen the aperture to consider all target-date funds and compare their most recent average annual behavior gap (for the 60-month period ended Jan. 31, 2018) with the average behavior gaps observed across all rolling five-year periods back to March 1994, we find that recent gaps are indeed smaller than the norm. In fact, we estimate the average dollar invested in target-date funds outearned the funds by around 0.21% annually over the five years ended January 2018. Note: The “All” figure shown for “Avg. of All Rolling 60-Mo. Periods” above differs from the negative 0.38% average annual behavior gap cited earlier because the various rolling periods are equally weighted in this analysis. By contrast, they were dollar-weighted in the earlier analysis. Source: Morningstar Analysts.

What’s more, that was true across the board: All but three target-date categories notched positive behavior gaps in the five years ended January 2018 and every category had a smaller gap than the historical norm.

Conclusions Our findings suggest that investors have succeeded recently, and over the long term, in using target-date funds. That is, they’ve captured the bulk of the funds’ returns on a dollar-weighted basis. This is encouraging given the pivotal role target-date funds have come to play in the retirement system.

That said, it’s important to keep in mind that the combination of steady contributions and a rising market has likely narrowed behavior gaps in recent years. What’s more, markets have been unusually placid. Those trends could easily reverse themselves, testing target-date fund investors in the process and, in all likelihood, causing behavior gaps to widen anew.

On balance, though, it appears that investors have generally succeeded in using target-date funds.

We chose this technique for a few reasons. First, we can more readily incorporate dead funds into the calculation, as well as funds that acquired other funds. Previously, these funds were excluded from the estimates of aggregate dollar-weighted returns. Second, we can more precisely specify each fund’s weighting in the calculation based on its size, flows, and returns.

This new technique, coupled with the different timeframe that we chose (March 1994-January 2018, versus the 10-year span we’ve examined in “Mind the Gap”), largely explains why our estimates of the behavior gap for target-date funds here slightly differ from our previous estimates.