The massive size of the U.S. fund industry means that while asset flows measured in dollars tell much of the story, some of the nuances can get buried. That’s why organic growth rates - which measure net new flows against assets under management - can be another helpful lens for capturing investment trends. That’s especially the case for spotting mid-sized and smaller fund companies, or individual funds, that are either gaining favor among investors or losing favor. Organic growth rates also lay out starkly the significant headwinds being faced by fund companies whose focus is on actively-managed strategies. The following chart looks at the organic growth rates among the top ten fund managers. Six of the nine families with active strategies are posting negative organic growth rates for the past twelve months, ranging from -0.3% for American Funds to -9.8% for Franklin Templeton. While the overall story isn’t new, the flow data shows the situation worsening for many companies from the twelve months ended May 2016. 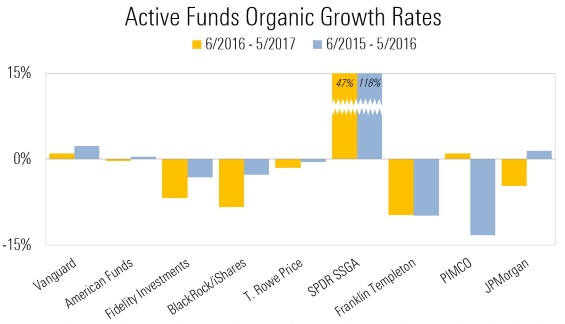 Among the exceptions is Pimco, which has seen a marked change in fortunes as its actively-managed bond funds have seen investors return following the management upheaval that followed Bill Gross’ departure in September 2014. Pimco went from a -13.2% growth rate for the year ended May 2016 to 1.0% for the past year. SPDR State Street Global Advisors stands out with some outsized percentage gains, but in a way, it’s not great news for the traditional active management industry. The firm’s growth rate of 47% for the last twelve months and 118% for the prior twelve months all comes from gains in Jeff Gundlach’s SPDR® DoubleLine Total Return Tactical ETF- an active ETF. On the passive side, however, it’s pretty much good news across the board. 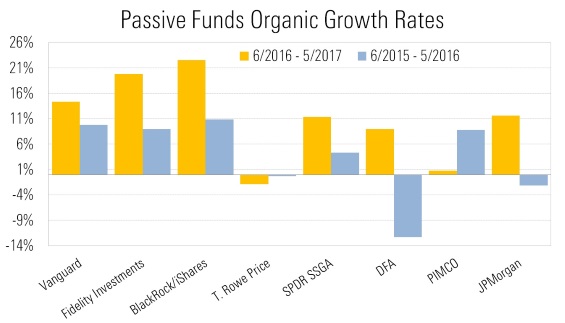