President Donald Trump's decision to withdraw from the Paris climate agreement may be a setback for the United States as a global leader, but not for global efforts to combat climate change, and investors are playing a key role.

The decision is a setback for U.S. global leadership, as it in essence gives up a seat at the table where major decisions will be made affecting climate change and the global economy. Instead of a rash of countries following Trump's lead and pulling out of the agreement, we're likely to see bolder commitments to it from the rest of the world, with both the European Union and China taking on leadership roles.

Within the U.S. over the past week, we've seen cities, states, businesses, and universities reaffirm their commitments to the agreement. Led by California, New York, and Washington, the U.S. Climate Alliance (12 states plus Puerto Rico as of June 5) "is committed to upholding the Paris Accord and taking aggressive action on climate change." The Mayors National Climate Action Agenda, endorsed by 257 mayors of American cities as of June 6, promises to uphold the goals of the Paris agreement and "intensify efforts" to meet their cities' climate goals and "work together to create a 21st century clean energy economy." And finally, more than a thousand universities, businesses, and investors have signed a declaration of their intent "to continue to ensure the U.S. remains a global leader in reducing carbon emissions."

For their part, sustainable investors, $23 trillion strong globally, will keep pressing the companies they own to address climate risk by staying on track to reduce emissions in line with the Paris agreement and by reporting to investors on the overall risks and opportunities that climate change poses for their businesses.

The day before Trump announced his decision,  Exxon Mobil (XOM) shareholders, representing 62.3% of shares outstanding, passed a resolution asking Exxon to produce an annual report analyzing how climate change is affecting its business, including the emissions reduction targets in the Paris agreement and the shift to renewable energy.

The 62.3% vote in support was a decisive result by any measure, but by shareholder resolution standards, it was a landslide. Typically, such resolutions, opposed by company management, garner far less than 50%, and any vote over 30% is usually considered a win--a "win" as in management is more likely to consider acting on the resolution because shareholder resolutions are only advisory. The climate change report resolution won 38% of the vote last year at Exxon, and the 19 similar resolutions voted on at other companies in 2016 averaged 28.2%. That wasn't a bad average result in the context of the usual levels of support for shareholder resolutions. This year, however, the momentum has accelerated, as shareholder majorities have approved similar climate resolutions at Occidental Petroleum and PPL, Pennsylvania's largest utility.

The fact that a majority of Exxon shareholders supported the resolution does not compel management to do anything, but such an overwhelming show of support will make it difficult for Exxon's new CEO Darren Woods and the board to ignore. Add to that the fact that the jump to 62.3% from 38% last year reportedly came primarily from three mutual fund companies that constitute Exxon's largest shareholders. We won't know for sure until they disclose their votes after proxy season is over, but The Washington Post reported that "a source familiar with the vote" said that  BlackRock (BLK) had supported the resolution and Vanguard and  State Street (STT) likely had as well. Together, the three firms own at least 17% of Exxon stock, according to Morningstar data, and possibly more, based on news reports. Among Exxon's 10 largest shareholders, if BlackRock and Vanguard supported the resolution along with those who supported last year's version, it leaves Wellington Management, Geode Capital Management (which runs Fidelity's index funds), and State Farm Insurance as the only possible holdouts. 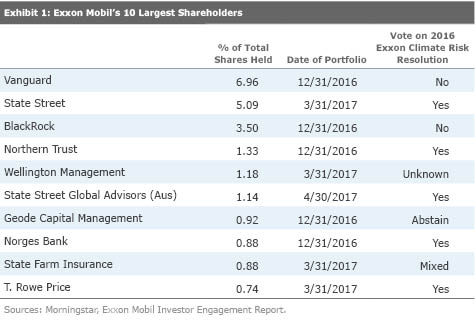 The vote shows that fund companies increasingly understand that climate change poses real financial risks that investors need to consider. Now that they have joined with large institutional investors like the California Public Employees Retirement System and the New York State Common Retirement Fund, which was the lead sponsor of the Exxon resolution, an investor wall of demand has arisen that makes it hard for companies to avoid being more transparent about the climate risks they face, regardless of Trump's decision on the Paris agreement.

It's not hard to convince large asset owners, such as pension funds, universities, and other large endowments and foundations, to invest sustainably. They understand the impact their assets can have, particularly when joined with those of other large asset owners. And they understand that over the long run, their investments are more likely to be financially successful if the companies they hold operate in a world where climate risk has been mitigated and even more successful if their portfolios are tilted toward companies that are best positioned to thrive in a low-carbon economy.

Now that fund companies are getting that message, it's easier than ever for individuals to invest sustainably. Surveys show overwhelming support for sustainable, impact investing, particularly among women and younger investors. The more dollars invested this way and the wider the coalition of sustainable investors, the greater the impact and likelihood of long-term financial success.

Jon Hale has been researching the fund industry since 1995. He is Morningstar’s director of ESG research for the Americas and a member of Morningstar's investment research department. While Morningstar typically agrees with the views Jon expresses on ESG matters, they represent his own views.

Jon Hale does not own (actual or beneficial) shares in any of the securities mentioned above. Find out about Morningstar’s editorial policies.