Non-traditional-bond funds, also called "unconstrained" bond funds, are often touted as a hedge against rising rates. This is because these funds typically have a wide berth when it comes to duration positioning. Importantly, the funds can take a negative (or short) duration position.

Last summer, my colleagues analyzed the non-traditional-bond Morningstar Category and noted that while the funds largely did perform better than the average intermediate-term bond fund when interest rates rose, they also exhibited a greater correlation to risky assets, including equities and high-yield bonds. So, in large part, these funds have traded interest-rate risk for credit risk. This is an interesting observation and an important reminder when considering the role that these funds might play in your portfolio. A non-traditional-bond fund is almost certainly not a substitute for a more traditional core bond fund. It could, however, play a smaller role in an investor's overall bond allocation when the risks are considered carefully (including how much of a portfolio is already allocated to high-yield bonds and other credit-sensitive fare).

It's also important to note that just because the funds "on average" do a reasonable job of protecting against rising rates, the array of strategies employed by these funds means that the range of outcomes can be vast. Take the most recent period of rising rates, which is measured by an increase in the 10-year Treasury yield of more than 50 basis points. This happened between Nov. 4, 2016, and Dec. 16, 2016, when the 10-year rose 81 basis points. During this period, the average non-traditional-bond fund gained 0.22% compared with a loss of 3.40% for the Bloomberg Barclays U.S. Aggregate Bond Index and a loss of 2.90% for the average intermediate-term bond fund. That seems like a reasonable win for these funds, albeit over a short period, but looking at individual returns within the category is a reminder that all funds are not created equal.

Digging a bit deeper into the performance of unique funds in the category (using the oldest share class) during the period shows a wide range of returns. While the average non-traditional-bond fund gained 0.22%, the range between the top and bottom deciles was 250 basis points. This compared with the average intermediate-term bond fund's return of negative 2.90%, with a range between top and bottom deciles of 130 basis points. What's more, more than 40% of non-traditional-bond funds logged flat or negative returns during the period. This is especially surprising given the rally in credit and other risk assets last year (which continued in November and December) and given the typically large (sometimes over 50%) allocation to corporate bonds, including hefty allocations to junk-rated bonds, found in many of these funds. For comparison, the average high-yield bond fund gained 1.50%, and nearly every fund posted positive returns during the aforementioned period.

Non-traditional-bond funds have been billed as many things, and the wide variety of strategies makes this a difficult group to analyze and understand. Even harder is knowing how these funds fit in a portfolio. Because of the generally large degree of credit risk and typically high correlation with high-yield bonds, there is little to recommend these types of funds as a core holding. And given the dispersion of returns, picking the right fund makes all the difference. Only four non-traditional-bond funds rated by Morningstar Research Services earn medals, as shown in the table below. 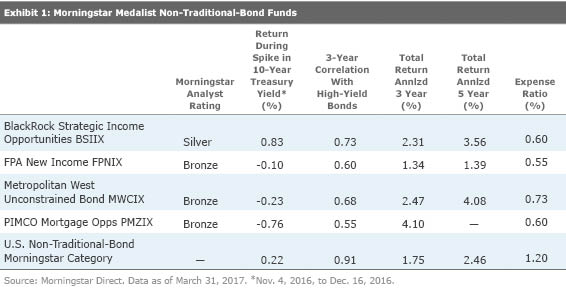 BlackRock Strategic Income Opportunities' (BSIIX) Morningstar Analyst Rating was recently upgraded to Silver from Bronze in large part because of its disciplined risk-focused process, low fees (which rank in the lowest quintile among peers), and strong track record, especially in periods of rising rates. In fact, this fund was one of the best-performing among peers during the aforementioned yield spike, with a gain of 0.83%. The focus here is on taking many small bets to diversify risk and generate a more consistent return stream. With a wide-ranging investment universe, turnover here can be quite high, and the managers make heavy use of derivatives to both hedge and take outright positions. The intense focus on risk, however, keeps the fund's riskier holdings in check, which can result in a more modest return profile than other more-high-octane peers. That said, over the five years through March 2017, the fund landed in the best-performing quintile among peers.

FPA New Income (FPNIX) isn't as flashy as some of its peers, and its low-risk style has struggled to keep pace during a bull market in credit (the managers target a 75%-100% allocation to high-quality holdings, for example). That said, when taking volatility into account, this Bronze-rated fund stands out, as its Sharpe ratios rank near the top of the peer group. Ultimately, the fund is best viewed as a safe haven from bond market sell-offs rather than as a source for upside during rallies. For example, the fund posted positive returns during 2008, during the euro crisis in the third quarter of 2011, and during the high-yield sell-off between mid-2014 and early 2016; the average non-traditional-bond fund posted negative returns in those periods.

Bronze-rated  Metropolitan West Unconstrained Bond (MWCIX) puts credit risk front and center, with nonagency residential mortgages, asset-backed securities, and corporate bonds figuring prominently. The team places less emphasis on making interest-rate bets than some rivals and isn't likely to run with much exposure to overseas bonds and currencies either. Instead, the team focuses on securitized debt and making shifts in and out of high yield, including corporates and nonagency mortgages. This focus has led to top-tier returns over the years (it ranked in the top decile for the five years ended March 31, 2017). Fees rank as below average, adding to its appeal.

PIMCO Mortgage Opportunities (PMZIX) is a niche offering with absolute return aspirations and an unconventional tool kit. PIMCO's strong securitized sector analytical capabilities, thoughtful portfolio-construction process, and reasonable fees earn this fund its Bronze rating. Unlike its typical non-traditional-bond fund peer, this fund focuses on mortgages and related securities, including agency mortgage-backed securities, nonagency residential mortgage-backed securities, and some non-U.S. mortgage securities. The managers actively manage duration with a range from negative one to positive eight years to serve as a counterweight to its credit positions. Indeed, this narrow focus on mortgages has given the fund a low correlation with high-yield bonds (0.55), and it offers a unique return profile among peers--it was one of few non-traditional-bond funds to post gains during the most recent high-yield sell-off, for example. Though the fund is more of an academic exercise than an essential portfolio building block, investors have been well-served. The fund ranked in the category's best-performing decile over the trailing three years.

Cara Esser does not own shares in any of the securities mentioned above. Find out about Morningstar’s editorial policies.