Liquid alternatives are a potentially useful tool for building well-diversified portfolios. These strategies are designed to provide low exposure and low correlation to traditional asset classes, primarily stocks and bonds, which could help smooth out returns and lower maximum drawdowns at the overall portfolio level.

While that's an admirable goal, it's difficult to achieve, and alternative funds have had varied levels of success when it comes to differentiating return streams from traditional asset classes. Achieving such diversification is critical for alternative funds: If they are offering only returns derived from beta (market) exposures, then investors are better off sticking with traditional investments, which will likely be much less expensive.

Yet investors lack a convenient means of quickly assessing these characteristics in a strategy and comparing it with peers. To remedy this state of affairs, we are introducing a new research framework called the Morningstar Style Box for alternative funds (hereafter, the "alternatives style box").

By providing an easy-to-understand visual representation of an alternative fund's diversification and volatility characteristics over time and versus peers, the alternatives style box allows for informed comparisons between funds running similar strategies and other liquid alternatives strategies in a single glance.

Initially, the alternatives style box will be used as a research tool for Morningstar analysts and included in our published research; ultimately, it will be a data point and tool available in Morningstar products. 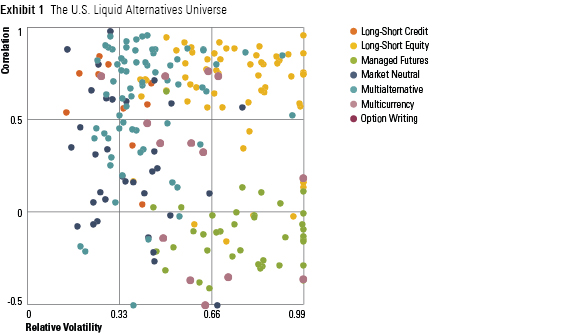 How It Works The alternatives style box has several key differences when compared with the Morningstar Style Boxes for equity and fixed income. Unlike the equity and fixed-income style boxes, the alternatives style box is not based on portfolio holdings. Portfolio data for alternative strategies is not always available or reliable given their heavy use of derivatives. Instead, alternative strategies are plotted on the style box based on historical performance characteristics, namely, correlation and volatility relative to a market-cap-weighted global equity index. 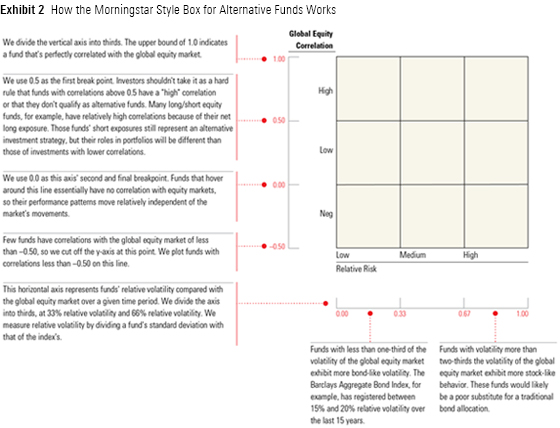 Why We Chose Global Equities as the Measuring Stick In a traditional portfolio of long-only stocks and bonds, the key risk, measured by both volatility and potential maximum drawdown, comes from the equity portion of the portfolio. The overwhelming pull of stock market returns on a traditional portfolio was evident during the financial crisis. From the precrisis market peak in October 2007 through the market bottom in March 2009, a balanced 50/50 portfolio composed of the S&P 500 and the Barclays U.S. Aggregate Bond Index had a maximum drawdown of more than 20%, as the bond index's 5% return during that time period wasn't nearly enough to make up for the S&P 500's 50% fall. Given that equities pose the predominant risk in traditional portfolios, it makes sense to first consider how well an alternative strategy diversifies away from that risk.

We chose a global equity index, instead of a domestic one, to reflect the increasing globalization of portfolios. Despite trailing U.S. equities significantly in performance during the 10-year period ended June 30, the market share of international developed-markets, emerging-markets, and world-stock mutual funds and exchange-traded funds has doubled to 12% during that time period. Asset-allocation vehicles are also getting more global. Industry giant Vanguard, for example, increased the non-U.S. equity exposure in its target-date and target-risk funds to 40% in 2015 from 30%. The U.S. share of global gross domestic product has also been on the decline. In 2000, it was approximately 30%, but by 2014 it had fallen to 22% when measured at current prices, according to the International Monetary Fund. We expect this trend to continue.

We are aware of other risks that investors may be looking to lower through diversification into alternatives, namely, interest-rate risk in fixed-income portfolios in the current low-rate environment. Yet we've found that many of the strategies that look to damp interest-rate risk, like non-traditional-bond and long-short credit funds, tend to do so by increasing equitylike risk. Avoiding unintended outcomes, such as trading the relatively lower risk posed by interest rates to fixed-income holdings for the potentially far greater risk in equities and more equity-sensitive securities like high-yield bonds, should lead to better long-term results for investors. By seeing a fund's correlation to global equities during a particular time period, investors will have a better understanding of what role that strategy could play in a portfolio.

Why Not Beta? A reasonable question to ask is why the style box does not use beta. Equity beta measures the amount of systematic risk a portfolio has compared with a broad market. A fund with a beta of 0.50 to the Morningstar Global Market Index would be expected to gain or lose roughly half the amount of the market plus or minus any alpha the strategy produces. It is a useful measure and one we consider regularly when analyzing liquid alternative funds to which we assign Morningstar Analyst Ratings.

It is important to know where a fund's beta is coming from, though, as it is based on measures of both correlation and relative volatility. Recall that one version of the formula to calculate an asset's beta is Correlation(a,b)*standard deviation of A/standard deviation of B. From that perspective, what we've done with the alternatives style box is essentially to decompose a fund's equity beta. Exhibit 3 highlights why this is important.

Fund A and Fund B both have the same beta of 0.25 to the equity market, but investors should have much different expectations for how either fund would behave on its own and within a larger portfolio. Fund A is just as volatile as the market but has a very low correlation to it, so its return pattern isn't going to look like the market's. Fund B, on the other hand, is a low-volatility strategy, but the direction of its returns is very dependent on which way the market goes. 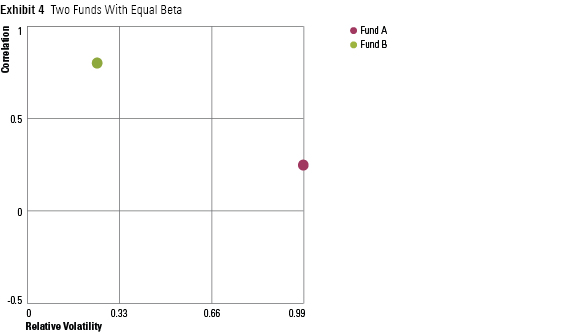 By breaking apart the two components of equity beta, investors get a more granular look at a fund's performance characteristics.

Final Thoughts In developing the style box, we have attempted to straddle the demands of simplicity--to make a tool that will be quickly intuitive to users--while also capturing key traits of alternative funds that are important to investors. The alternative style box should not be considered a comprehensive tool for performing due diligence on alternative funds--rather, it is a starting point, useful for screening and making comparisons.

In an upcoming Fund Spy, we’ll take a look at several ways investors can use the alternatives style box to make more-informed decisions, using real data and case studies of specific funds.