U.S. stocks ended the quarter modestly higher, which is a remarkable turn of events given the sell-off that kicked off the year. The broad-based Morningstar US Market Index was up 1.1% so far in 2016. The index is slightly positive over the last year and has now returned an annualized 11% over the last five years.

Worries multiplied in the new year. New rules designed to stabilize China's stock markets seem to have had the opposite effect, leading to dramatic downward swings in prices. These swings highlighted underlying weakness in the Chinese economy and led to growing concern about emerging markets and global growth. Weak global demand and continued supply growth spelled trouble for crude oil futures as they plunged to the lowest levels in years. At the same time, investors were eyeing the U.S. Federal Reserve, which had just raised rates in December and had initially indicated that it was planning on continuing to do so throughout 2016 as it started down the path of normalizing monetary policy.

But as the quarter moved on, these fears subsided and equities began to turn higher. China’s market stabilized, even if the underlying concerns about the the health of the country’s economy remained. Signs that oil producers were willing to talk about freezing supply at current levels helped bring crude prices off their lows. Add in both words and actions from global central banks that made it clear we are still in an era of very loose monetary policy, and equity markets in the U.S. were able to make up the lost ground in short order. 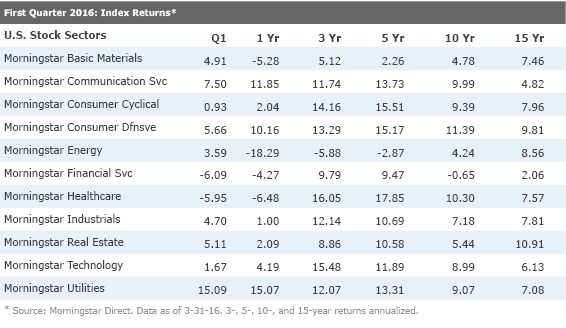 In terms of sector performance, utilities were the clear winner in the quarter, rising over 15% as the specter of higher rates faded. The outperformance has stretched the valuation of U.S. regulated utilities, but Morningstar's Travis Miller thinks values can still be found in energy producers and overseas. On the flip side, it was a tough month for financial-services firms, with the sector losing over 6%. The overhang on these firms has been questions about the potential of energy-related credit losses. Morningstar analysts think those fears are overblown and they see plenty of value in the sector. Healthcare was the only other sector that lost ground in the quarter, as political rhetoric about lowering drug prices took its toll.

Click here for all of our sector wrap-ups and outlook for the full market. 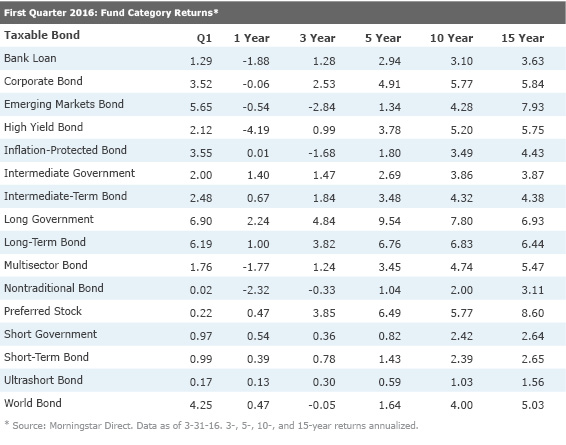 On the fixed-income side, a flight to safety sent the yield on the 10-year Treasury Bond down to 1.78% from 2.24% at the start of the year. That drop proved a major tailwind to bond funds, with the long government and long-term bond open-end fund categories each rising over 6% in the quarter. High-yield bonds funds, which had been under tremendous pressure late last year, stabilized and rose over 2% for the quarter. 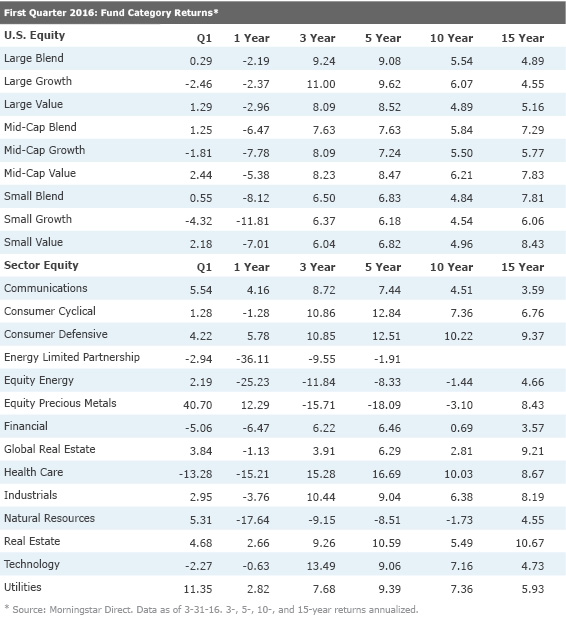 Value funds outperformed growth funds in the quarter, with mid-cap value funds turning in the best performance with an over 2.4% rise, while small growth was the worst performer, losing almost 4.3%. For sector funds, the rebound in gold and other other metal prices sent the equity precious metals category soaring over 40%. Healthcare, energy limited partnerships, and financial funds had the worst performance. 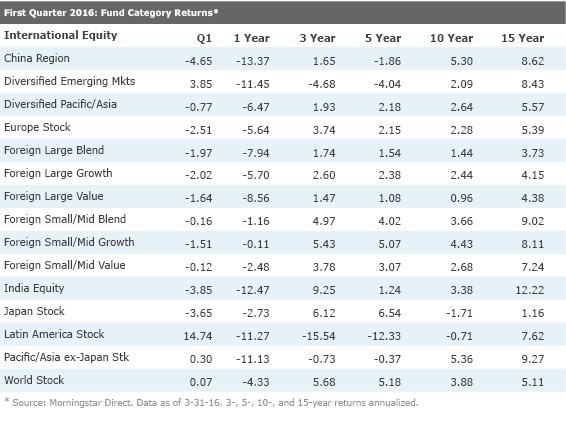 Overseas markets lagged the U.S. for the most part. The China region fund category with its over 4.5% decline, and the India equity category with a nearly 3.9% fall, were the worst performers in the quarter. An almost 15% jump in the Latin America stock category was the clear winner; however, that category is still down more than 10% over the last year.