A version of this article was published in the December 2015 issue of Morningstar FundInvestor. Download a complimentary copy of FundInvestor here.

Every active manager is different. The labels we put on them might make them look the same, but they aren't. To make the most of them, you need to understand a fund's strategy. So, I thought I'd bring some pictures to help you understand how a manager invests.

We mapped every buy and sell that eight prominent stock funds made in one quarter or one month--mainly during the third quarter of 2015. Seeing every holding mapped is helpful, but just as useful is seeing what a stock looks like when it is appealing enough to be purchased and when it is unappealing enough to be sold. As you can see from the graphs, all of these managers have distinctly different styles.

The Morningstar Style Box is built using value and growth measures for the x-axis score and market cap for the y-axis score. High valuations and high growth rates push a stock to the far-right side; a utilities stock with low valuations and low growth would be far to the left. It's not a perfect system, and it might not capture precisely what a manager does, but it does give you some sense of what's driving a manager's strategy. You can dig into the methodology behind the style box in this document.

Typically a manager will have a few reasons for selling, but the main reasons are success or failure. If it's success, the manager is likely selling because the market has come around to his way of thinking and has placed a higher valuation on a company. These would be sales that tilt toward the upper-right side of the style box. For failures, you may have declining price multiples and declining market cap. These are usually the sales to the lower left of the rest of the style box.

Let's take a look at some trades from well-known funds. 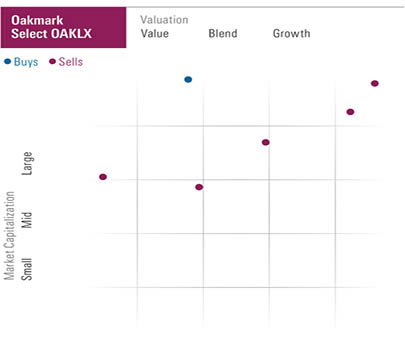 Let's start with the fund that made the fewest trades. Bill Nygren is a low-turnover-focused portfolio manager, so you won't see a lot of trades in a quarter. In the third quarter of 2015, Nygren made just one purchase, adding to the fund's position in  General Electric (GE). It illustrates how Nygren's view of value is more like Warren Buffett's than John Neff's, who ran the deep-value  Vanguard Windsor (VWNDX). Buffett says you pay a fair price for a great business that has defensible moats and can compound your investment over time. GE has a Morningstar Economic Moat Rating of wide because its installed base of industrial equipment is a huge challenge to competitors. In the third quarter, the stock dipped to its lowest point in a couple of years, illustrating that Nygren does still care about price.

Meantime, Nygren trimmed a big winner and a big loser. That dot to the far upper right is  Amazon.com (AMZN), which doubled in 2015 as its growth continued at a remarkable pace, enabled by its low-cost operations. It also has a wide moat rating. On the far left, just touching the mid-/large-cap line is  Apache (APA) from the hard-hit oil sector. Nygren sold much of his stake in the company as falling oil prices hit the shares of this no-moat company. A deep-value investor might buy more on a sell-off, but Nygren may have decided that would be throwing good money after bad. 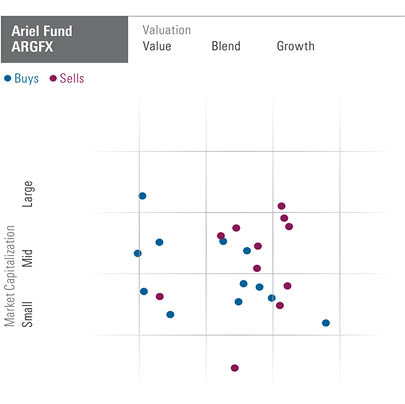 John Rogers is also a fan of Buffett, but, as you can see, he fishes in a different pond from Nygren. Ariel's buys were mostly on the lower-left side, while it consistently sold stocks whose valuations moved into growth territory. Clearly, valuation matters more at Ariel. In fact, the fund has a huge number of holdings in narrow-moat stocks, indicating Rogers will sacrifice some barriers to entry in exchange for a break on price. Those three sales toward the upper right are  CBRE Group (CBG),  Royal Caribbean Cruises (RCL), and  Mohawk Industries (MHK). Each was a slight trim in position size, indicating that Rogers is gradually redeploying money from pricier to cheaper names. Those two blue dots on the lower left are Kennametal (KMT) and Bristow (BRS). Both have been hammered this year and no doubt appear cheap to Rogers. Bristow is an energy name--like I said, some value managers are buying more energy. 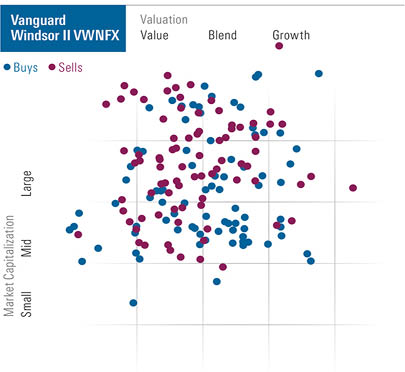 Former lead manager Jim Barrow once said, "I hate all the companies we own." I love the honesty of this deep-value manager. His idea was to buy stocks so cheap that even modest improvement would pay off handsomely. Barrow stepped down at year-end, but successors Jeff Fahrenbruch and David Ganucheau are steeped in Barrow's style, so I don't expect a change.

Yet, this picture shows buys and sells widely dispersed across the style box. The explanation is that Barrow, Hanley, Mewhinney & Strauss isn't the only cook on this fund. The firm runs 60% of the assets, while Vanguard farms out the rest to four more subadvisors. Each one uses a different value strategy, and the fund now owns 260 holdings. 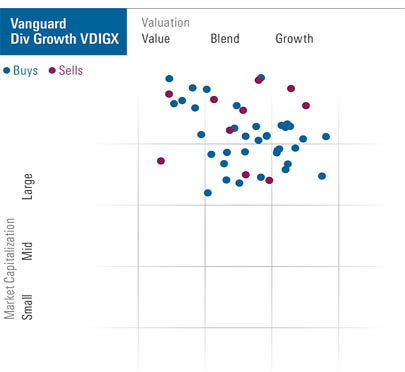 Many of this fund's purchases are in the blend or growth sections, and it really drives home the difference between dividend growth and equity income. Equity-income funds prioritize yield above everything else, and that leads them to value names with limited growth potential, such as utilities. But simply changing the emphasis to companies with the potential to raise their dividends means you refocus on companies with earnings growth and strong balance sheets. Thus, we can see that in the second quarter of 2015 Donald Kilbride was adding names like  Johnson & Johnson (JNJ) and  Oracle (ORCL). 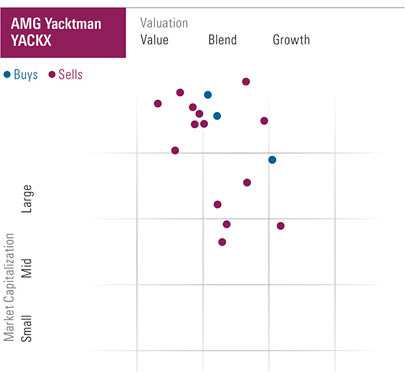 There are a lot more red dots than blue in this picture because about one third of this fund's assets under management walked out the door during the past 12 months. The fund often lags when growth is in favor, and it is currently in one of those droughts. To manage this, Yacktman spread its sales through 14 of its names during the third quarter of 2015. Interestingly, the managers did so in very even numbers. All but two of the stocks were sold in units divisible by 100,000 shares. (I haven't seen that before.) Among Stephen Yacktman and Jason Subotky's bigger sales were  Cisco Systems (CSCO) and  Coca-Cola (KO), and each was trimmed by 2.4 million shares. Because they own mostly large-cap stocks, they aren't likely to have a big market impact as they sell. Still, it is a tricky business, as managers need to keep looking for good new ideas even if most of what they are doing is selling. And, in fact, these managers did add shares of  Twenty-First Century Fox (FOXA) and Oracle. 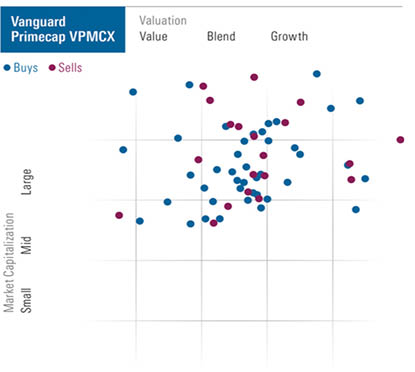 While momentum managers look for companies with surging earnings and rising stock prices, other growth managers like to buy on dips when a company hits a speed bump so they can get a little more price protection. To buy on bad news, however, you need a lot of conviction, and that requires a lot of research. That's what Primecap does. As you can see, there's a preponderance of buys in the blend zone even though they run a growth fund. That's why the managers like it when a favorite biotech or tech name has a temporary sell-off. For example, the managers boosted their stake in fallen  HP (HPQ) when it dipped in the second quarter. The stock fell some more in the fall, but the Primecap folks are patient investors, so that doesn't make it a mistake. The same is true of  LM Ericsson (ERIC), which got cheap in the second quarter and has since gotten cheaper. On the other hand, they added to  Progressive (PGR), which was trading around where it had traded for a while in the second quarter, and the stock has since taken off.  They also bought tech highflier  NetApp (NTAP) on a dip in the second quarter. 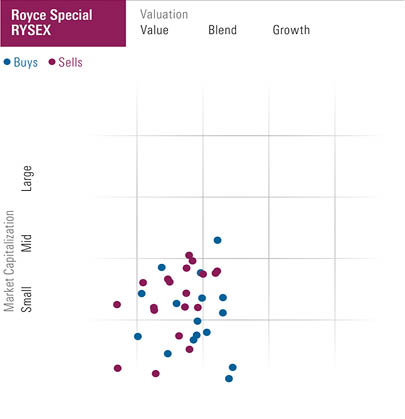 Clearly the style box captures some of what Charlie Dreifus is doing. Nearly all his trades occurred in the small-value realm. Dreifus places strong emphasis on price and accounting. He avoids any companies with a hint of accounting gimmickry in favor of those with healthy balance sheets but whose shares are trading at low valuations. For example, he bought Vishay Intertechnology (VSH) in the third quarter. The semiconductor maker's stock was hit hard, but its low levels of debt likely attracted Dreifus. 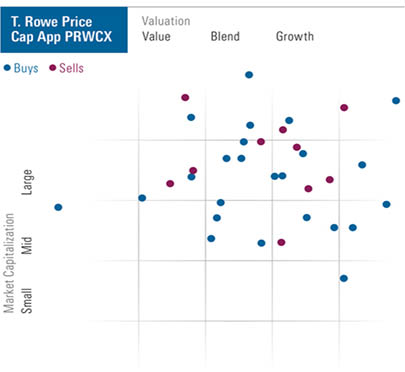 David Giroux wants blue-chip stocks trading at modest multiples. As you can see, though, he was buying names all over the style box. This fund isn't pegged to one corner of the style box as it is meant to be a broad core holding. Giroux views valuations differently for growth stocks versus cyclical stocks. For cyclicals, he wants companies trading cheaply relative to what they can earn over a full market cycle. Thus, he trimmed  AutoZone (AZO) even though it was far into growth territory, perhaps because it was trading near a five-year high in the third quarter. Conversely,  Johnson Controls (JCI) was added in the third quarter at a multiyear low. He also added to one of his favorite stocks:  Marsh & McLennan (MMC). The insurance broker's shares were depressed by a strong dollar and weak emerging markets, but some say the underlying businesses remained strong.

Final Thoughts It helps to understand your manager's process so that you can use the fund wisely and find complementary funds for your portfolio. As you can see, some funds are quite focused within one corner of the style box and others are more diffuse. As such, their performance will be fairly different. For that reason, it is often a good idea to have some of both types.

Russel Kinnel has a position in the following securities mentioned above: OAKLX, RYSEX. Find out about Morningstar’s editorial policies.