All eyes Thursday will be on the Federal Reserve as it wraps up its latest meeting and announces whether it will hike short-term interest rates. As recently as August, futures markets were convinced of a 56% probability that the Fed would act at this meeting. However, that prospect seems less likely, especially given recent headlines about slowing economic growth in China (as of Wednesday, the markets signaled a modest 23% probability). Few believe we're out of the woods, though, given expectations of a 62% probability that rates will be higher by the Fed's Dec. 16, 2015, gathering.

Since the credit crisis, the Fed has overseen a period of extraordinary monetary policy, keeping the federal-funds rate at near zero for an unprecedented seven years. Short-term rates, which are mostly driven by the Fed, have been at rock-bottom levels throughout that period, although they've started to creep up modestly this year in anticipation of rate hikes. Today's fear is that they'll continue to rise, and that market carnage will eventually ensue.

But that's just short-term rates. What will a Fed rate hike mean for the broader bond markets? The answer is that it depends. The bond market doesn't respond the same way to every stretch of rate hikes. Whether investors believe the Fed is acting too quickly, too slowly, or perhaps not enough can make all the difference. 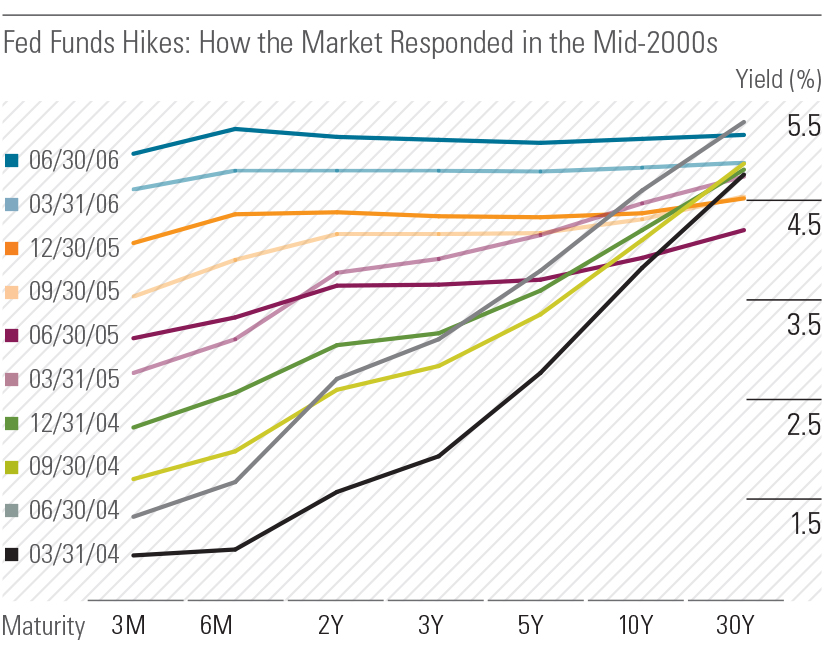 That's the message of the accompanying charts, one from a period of Fed rate hikes in the 2000s and another from the mid-1990s. During the former, the Fed raised short-term rates roughly 4 percentage points between March 2004 and June 2006. Compared with some earlier cycles, the reaction was measured. Although their longer maturities meant they didn't escape volatility, yields for 10- and 30-year Treasuries didn't rise anywhere near as much as the federal-funds rate did (as the first chart shows, leading to a "flatter" yield curve). Prices fell for bonds in both tenors, but factoring in interest, the 10-year lost 1.7% for that period, while the 30-year bond actually gained 2.2%. The (then) Lehman Brothers Aggregate Bond Index rose 3.4%.

Yet, things can get much worse. Rate cycles rarely occur with the same speed, magnitude, or length. When the Fed hiked rates rapidly in 1994, for example, investors pushed longer-term bond yields up in much tighter step with the Fed's short-term rate hikes, and long-maturity bonds were shellacked. (The second chart shows short and long-term rates nearly moving in tandem, a so-called parallel shift in the yield curve.) That environment was chock-full of other events that spooked the market. However, the fact that the Fed moved so far and so quickly in pushing up short rates helped trigger panic among investors. Then-Fed Chairman Alan Greenspan later said in a 2013 Bloomberg article, "You construct what we used to call Fed-speak. Nobody was quite sure I wasn't saying something profound when I wasn't." The 10-year Treasury lost 7.9% in 1994, while the 30-year bond slid more than 12%. The broader Aggregate Index slumped 2.9%. 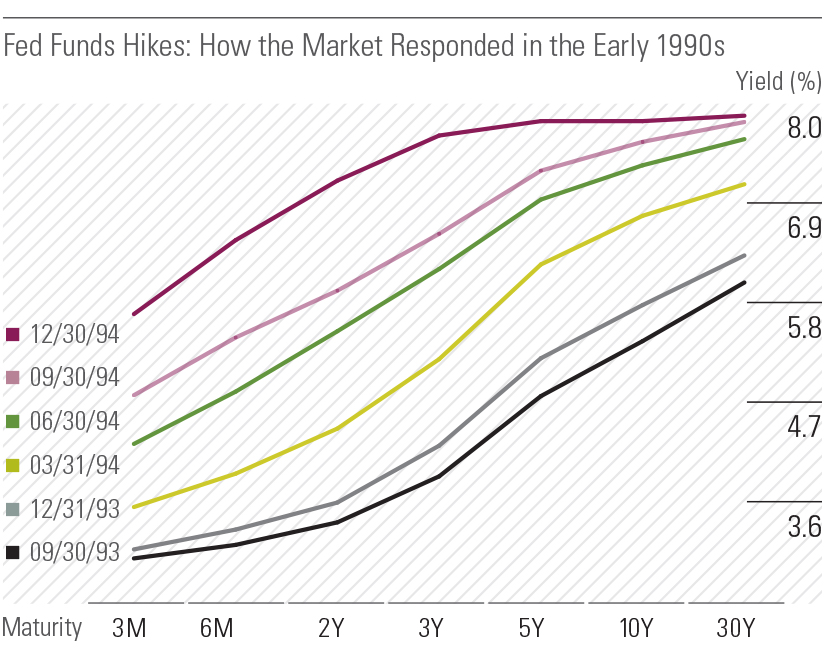 In addition to the questions about how fast the Fed will hike rates and whether the market thinks the Fed is moving too quickly or not quickly enough, today there are a number of other factors at play. These include a relatively weak global economic outlook and strong overseas demand for long-term Treasuries. That makes it extra tricky to predict how funds will fare when the Fed chooses to act.

We'll cover the potential impact of a Fed rate hike on the various non-Treasury sectors of the bond market in more depth in a Fund Spy next week. However, some initial observations:

1) Some rate shifts, as those of 1994, can be especially damaging to long-duration funds: The long-term bond Morningstar Category tumbled 6.80% that year. Its results during the March 2004 to June 2006 stretch were much better (0.76%), but both showings left the category near the very bottom of the fund universe.

2) The flip side is that even though short-term rates are the most directly impacted by the Federal Reserve, short-duration funds almost always perform better than others during rising-rate environments. However, the impact can still vary from one rate cycle to another, especially depending on how fast the Fed chooses to move.

3) If the economy is healthy or gaining strength, you can usually expect credit-sensitive funds to perform better than higher-quality, longer maturity fare. However, that may not prove true in all markets; if bond yields increase significantly so too will borrowing costs for corporate issuers, which could eventually put pressure on their financial health.

4) Normally the last two items make bank-loan funds--which hold floating-rate junky loans--star players. The wild card this time is that, to attract investors during rock-bottom rate environments, many loans promised a minimum level of income regardless of how low short-term rates got. When short rates rise, though, that means many loans won't see their own rates float up until short rates get above those floors.

A version of this article was published in the September 2015 issue of Morningstar FundInvestor. Download a complimentary copy of FundInvestor here.