If flows into inexpensive index funds and exchange-traded funds are any guide, investors have become much more attuned to the price they pay for their investments. Actively managed funds, which often (but not always) charge more than their index-tracking counterparts, have been losing market share to index products--both traditional index mutual funds and ETFs--for several years running.

But investors are being more tolerant with a handful of funds that, despite large asset bases, have expense ratios that are above average or even high relative to other funds in the same category and sales channel. Generally speaking, funds with large asset bases should be less expensive than smaller funds, as they can spread their costs across a larger shareholder base. But some funds, despite sizable asset bases, haven't shared economies of scale with their shareholders.

To help home in on this group, Morningstar data analyst Annette Larson screened Morningstar's fund database for funds with more than $10 billion in assets that have fee-level scores of Above Average or High. As discussed here, the fee-level scores help account for the fact that fund share classes sold through different sales channels have different fee structures. For example, institutional share classes are typically cheaper than funds distributed through brokers; fund companies don't have to provide the same services for institutional shareholders that they would for brokers. Comparing across sales channels is like comparing apples to oranges. Fee-level scores depict a fund's expenses relative to the subgroup of true category peers.

Among the large funds that had above-average or high expenses relative to their category/sales-channel peers, Larson further screened for those funds that had the bulk of their assets in the high-cost share class. After all, some of the share classes with high costs relative to their category and sales-channel peers are dinky; for example, several of American Funds R1 and R2 share classes, which are for participants in small retirement plans, have Above Average or even High fee-level scores. But the bulk of American Funds' assets tends to be in A shares, which have much lower costs.

That said, a handful of the share classes that are both large and expensive relative to their category peers do, in fact, house at least 50% of the assets in that fund, as you can see in this table. 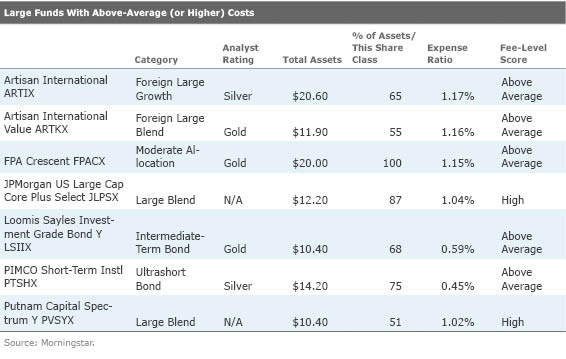 Note that most of these funds receive positive endorsements from our analysts. At the same time, it's worth underscoring that high costs can be a headwind for a couple of key reasons. One is that a sizable asset base, which these funds have all attained, can inhibit the extent to which funds can invest differently from--and perhaps better than--their peers. Indeed, some of these funds have already seen their investment universes constrained because of the amount of money their managers are swinging around. That means their high costs could weigh on performance more than they did in the past, when they were more nimble. In addition, given the strong rallies in both the equity and bond markets over the past six-plus years, absolute returns may well be quite low across asset classes over the next decade or longer. That means it's even more important than ever to pay attention to fees.

Here's a closer look at three of the funds on our large-asset-base/high-expense list.

Artisan International Investor (ARTIX) Owing to strong recent performance, this fund's asset base has swollen over the past few years, from $8 billion at the end of 2011 to more than double that today. Senior analyst Greg Carlson notes that large caps, which are more liquid, now dominate the portfolio, but lead manager Mark Yockey says that's where the team is finding value. Carlson points out that Artisan has done a good job of shuttering funds pre-emptively--for example,  Artisan International Value (ARTKX), also on the list of big funds with above-average price tags, has long been closed to new investors. However, he says the fund's costs should be lower, noting that Artisan's board "hasn't been as aggressive as it could be when negotiating fees on behalf of fund shareholders." That said, Morningstar's analysts look favorably on its forward-looking prospects, in large part because of Yockey's long and successful track record and the experienced team backing him up.

FPA Crescent (FPACX) Dan Culloton, Morningstar's associate director for active strategies, notes that this isn't the fund it once was, owing to its asset size; specifically, it's unable to take meaningful stakes in small- and mid-cap stocks, which helped it in the past. He also notes that the fund's expense ratio hasn't declined commensurately with its asset growth; while lower administrative costs are in the offing, a fixed 1% management fee limits the extent to which shareholders can benefit from economies of scale. But this remains one of Morningstar's high-conviction picks in the moderate-allocation group; Culloton says he sees no signs that asset size has blunted management's disciplined, bargain-hunting style.

PIMCO Short-Term Institutional (PTSHX) A 0.45% expense ratio may sound puny, but it's on the high side relative to other short-term bond funds geared toward institutional investors. Moreover, it's the largest fund in the ultrashort-bond category; arguably, investors should benefit more from economies of scale than they have. Sarah Bush, associate director of manager research for Morningstar, views the above-average price tag as a mark against it but still likes its prospects. She notes that manager Jerome Schneider puts a premium on liquidity and keeping volatility down, a sensible strategy in a category where investors no doubt prize a smooth ride but haven't always gotten it with rival funds.