Mutual fund flows provide one of the best windows into investor behavior.

What investors are buying provides a clue into what they think might happen in the future. For the past several years, for example, investors have sent substantial new assets to international funds. It's hard to generalize about their motives: They could be signaling that they think foreign stocks will be better performers than U.S. in the years ahead, or perhaps they're rebalancing because their portfolios are heavy on domestic names, which have outperformed. Unfortunately, fund buyers aren't always so valuation-sensitive and contrarian-minded: In the wake of the bear market, investors steered substantial new assets into bonds, missing a good chunk of stocks' subsequent rally.

The types of assets investors are selling can provide insights, too. It's a rare fund that gets sold because it has outperformed and investors want to be pre-emptive and lighten up on it. Instead, the list of funds that have been seeing the biggest outflows is often dominated by funds that haven't lived up to investors' expectations in one way or another, either because their performance has been disappointing, they've undergone fundamental changes, or both. The offerings with the biggest outflows aren't necessarily a contrarian shopping list, but they do yield insights into how investors can better set their expectations in the future. 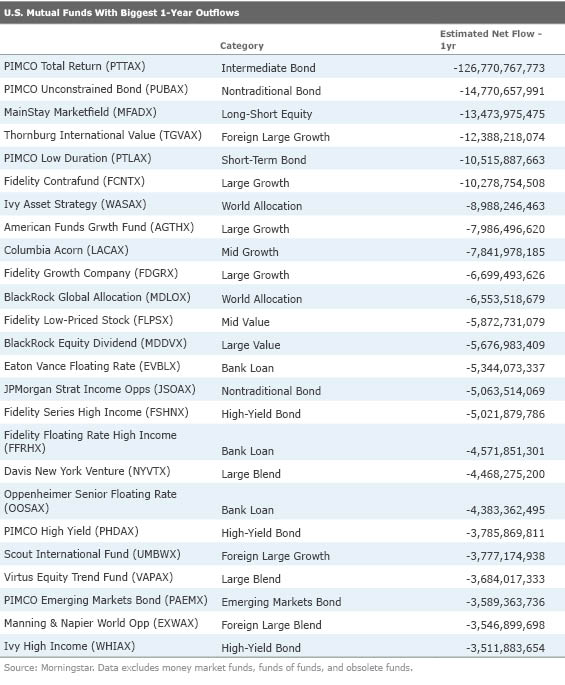 Rising Rates Are Hard to Call Three funds on the list of the 25 biggest asset losers land in the bank-loan category:  Eaton Vance Floating Rate (EVBLX),  Fidelity Floating Rate High Income (FFRHX), and  Oppenheimer Senior Floating Rate (OOSAX). There's nothing inherently wrong with these three funds: While the Oppenheimer fund earns a Neutral rating from our analyst team, both the Eaton Vance and Fidelity funds garner Bronze ratings--the highest rating any bank-loan fund receives currently. The funds' returns have also been respectable: While both the Eaton Vance and Fidelity funds have lagged their peer groups in the past three years, all three funds have delivered solid returns of more than 4% annualized in that period--more than twice the return of the Barclays U.S. Aggregate Bond Index in that time frame.

Rather than souring on the fundamentals of these particular funds, it appears that investors lost interest in the whole bank-loan category when rising interest rates didn't materialize as many had predicted. With interest rates that reset based on a spread over Libor, bank loans are a rare type of bond investment that is insensitive to interest-rate movements. Owing to those features, investors flocked to the group during the "taper tantrum" in the summer of 2013; the category picked up more than $61 billion that year, nearly doubling in size. But that interest-rate hiccup proved short-lived, and rates even trended down in 2014, prompting outflows from the category that have persisted into this year. In all, investors had yanked more than $30 billion from the group in the one-year period through May. That has even forced some bank-loan funds to turn to lines of credit to meet investor redemptions, as bank loans can be illiquid.

So, what's the takeaway for investors? At the risk of stating the obvious, the direction of interest rates is notoriously difficult to predict. And even as bank loans might appear to be a sensible choice in a rising-rate environment, floating-rate loans' credit sensitivity and illiquid nature make them a niche asset class at best; performance is apt to be heavily correlated to the equity market. Investors should also take care to understand the mechanics of bank loans and what prompts their interest rates to reset. Analyst John Gabriel took an in-depth look at this issue in this article.

Investors Want Go-Anywhere ... Until They Don't Two "go-anywhere" world-allocation funds also appear on the list of funds that investors have been selling:  Ivy Asset Strategy (WASAX) and  BlackRock Global Allocation (MDLOX). The world-allocation group saw strong inflows in the wake of the bear market, as investors' prized these funds' flexibility to hold stocks and bonds, both in the U.S. and overseas. But the category has seen modest outflows thus far this year, and these two have led the way.

The two funds have very different strategies and fundamentals. The Ivy fund currently garners a Neutral rating due to its recent personnel changes; Michael Herbst, director of research for active strategies, argues that investors should be particularly attuned to management changes when a fund has a very flexible strategy like this one does.

Meanwhile, the BlackRock fund retains a Gold rating. While its three- and five-year returns have been middling, Dan Culloton, Morningstar's associate director for active strategies, believes patience is warranted. In contrast with the Ivy fund, he notes that the fund's personnel and strategy remain intact. Moreover, the fund held up particularly well during the bear market. Six years into a bull run, investors may be valuing the potential for downside protection less, even though they should arguably value it more given that valuations are higher. Outflows from the fund point to the value of having a long holding period for any sort of go-anywhere fund; barring fundamental changes, investors should plan to hold such offerings over a complete market cycle, at a minimum.

Cult of Personality Finally, the elephant in the room on the list of funds that investors have been selling is PIMCO's presence: No fewer than a fifth of the funds on the list of the 25 most heavily redeemed offerings hail from the firm that Bill Gross founded and departed from last fall. Former Gross charges  PIMCO Total Return (PTTAX) and  PIMCO Unconstrained Bond (PUBAX) lead the way, but  PIMCO Low Duration (PTLAX),  High Yield (PHDAX), and  Emerging Markets Bond (PAEMX) appear here, too. (The high-yield fund was seeing redemptions even before Gross' departure.)

The outflows have been breathtaking--more than $150 billion from these five funds in the past year--but there are a few potential takeaways here. One is that the departure of a key manager--even a marquee name like Gross--needn't automatically be cause for sale. While it's still early days for PIMCO in the post-Gross era, Morningstar analysts are generally cautiously optimistic on the firm. Four of the aforementioned five funds have hung on to medalist ratings in the wake of Gross' departure; the lone exception is PIMCO Unconstrained Bond, which wasn't a medalist before Gross left and isn't one now. Four of the five most heavily redeemed PIMCO funds land comfortably in the top halves of their peer groups in the past year; Emerging Markets Bond has been the sole laggard.

Moreover, redemptions appear not to have had a significant impact on performance thus far. Following Gross' departure, some investors were concerned that managers would have to unload positions to pay off departing shareholders, depressing prices of those bonds and various PIMCO funds in the process. However, PIMCO appears to have managed those redemptions well to date. For example, at PIMCO Total Return, the most heavily redeemed fund, management kept a sizable share of the fund in highly liquid assets; the firm's heavy use of highly liquid derivatives also helped it meet redemptions.

That said, senior analyst Sarah Bush continues to keep an eye on redemptions at PIMCO; ongoing outflows could prove problematic at some point. Moreover, fund shops won't always be able to handle big outflows so ably; if investors see big outflows at a fund that has historically maintained positions in less-liquid names, that could be cause for running to the exits sooner rather than later.