China’s growth story has been remarkable. The country’s economy grew at a staggering 10% annualized pace for 20 years as its government conducted a massive infrastructure building campaign. Global companies built manufacturing operations in China to take advantage of a cheap, educated workforce. More than 600 million people were pulled out of poverty, creating a powerful middle class consumer block that influenced global commodities demand and bought all types of goods and services with their newfound wealth.

China today is still a force to be reckoned with, but recent economic data reveal it isn’t the roaring dragon it once was. Granted, at an estimated 7.7% GDP growth rate for 2014, it outpaces the growth rate of most developed and emerging markets, and it also remains one of the world’s largest economies. But wages have started to rise, making manufacturing more expensive compared with other emerging and developed countries. And there are concerns about the financial health of its banks and a real estate market that looks overheated. In an era of low yields, it’s no wonder investors are looking around the globe and asking: “Where’s the next China?”

Many investors point toward so-called frontier markets--regions that are at earlier stages of their development than more-mature emerging markets. Places such as Southeast Asia, Eastern Europe, and South and Central America all hold promise, but it’s Africa--home to abundant natural resources, a huge, young potential workforce, and some of the fastest growing economies--that has many investors salivating. Could Africa follow a similar trajectory to China’s over the next few decades?

Sizing Up the Opportunity Demographic data make it easy to see the attraction to Africa. The population of the continent’s 54 countries, currently at 1.1 billion, will grow faster than most regions in the coming decades, according the U.N. projections (see Exhibit1). Primary-school enrollment rates in sub-Saharan Africa increased to 77% in 2011, up from 58% in 1999, according to the World Bank. A large, educated workforce should attract manufacturers. As Africans' wages increase, their spending habits will impact the demand of all kinds of goods and services. 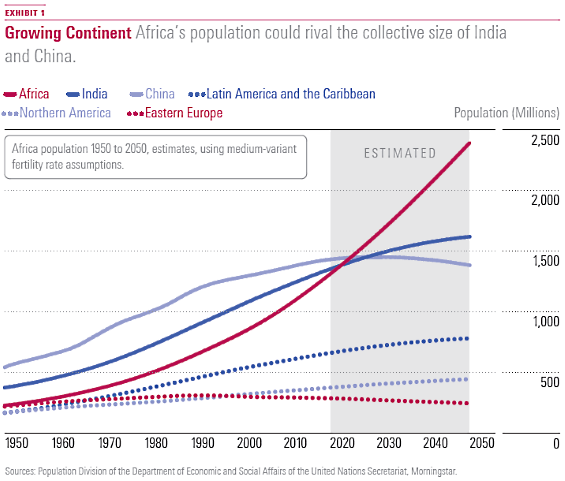 Bell is also quick to point out other positives. Inflation on the continent has fallen to an average 6% from as high as 19% in the 1980s. Debt/GDP for African nations as a whole has fallen to 20%, a 30-year low, and only four African countries don’t have some form of elections. What may be most appealing to Bell is that the growth story emerging in Africa isn’t concentrated on just energy or financial companies. Rather, he’s seeing broad-based growth across all sectors.

The region, though, is still plagued by traditional drawbacks. The continent is largely at peace, but violent conflicts have broken out over the past few years. There is the constant threat of terrorism and disease and the age-old problem of corruption. There is also the risk of regime change. Indeed, for many market watchers the thing standing between workers and good-paying jobs are politicians enacting sensible economic policies.

"You can talk of a demographic dividend, but for that to occur, you need the right economic policies to create a vibrant economy generating sufficient job opportunities," says Malek Bou-Diab, the portfolio manager of Bellevue BB African Opportunities, a Switzerland-based fund. "Compared to the evolution in China, all African countries will have to be more proactive. They will have to boost investments. This will be one of the main challenges African countries face in the coming years."

While the region’s risks are well known, maybe the biggest concern about investing in Africa is liquidity. South Africa’s stock exchange—the region’s most liquid—had a recent average daily trading volume of $3.5 billion. The New York Stock Exchange trades more than 10 times that amount on a typical day. Many fund managers have forgone purchasing shares in the open market in favor of buying blocks from institutions, haggling over the price much like they would a new home.

Managers such as Bou-Diab have weighed those risks against the potential rewards and have come to the same conclusion: It’s worth it. Morningstar tracks more than 1,500 funds located around the world with assets more than $500 million that have invested a collective $377 billion in African equities. U.S. open-end funds accounted for roughly 10% of that total.

Gaining Access For most investors, an exposure to the region boils down to owning South African stocks. Home to 53 million people, South Africa is the continent’s most sophisticated economy, largely due to an abundance of natural resources. The country dominates African exposure in widely used benchmarks such as the MSCI Emerging Markets Index. And South African companies such as energy and chemicals conglomerate  Sasol (SSL), Standard Bank, and Naspers, the large Internet and media company, make frequent appearances in both active and passive fund portfolios.

Dodge & Cox International Stock (DODFX) owns shares of South Africa-based Mtn Group, a mobile phone operator that has spent heavily building a wireless network across Africa and the Middle East. The mobile banking and payments trends in Africa are powerful. Consumers in some countries circumnavigate the traditional banking system with a few taps on their cell phones. Mtn Group has 215 million customers in 22 countries and is a key player in those themes.

Other common holdings include publicly traded subsidiaries of global conglomerates, usually located in Nigeria. For example, Wasatch Frontier Emerging Small Countries (WAFMX) owns Nestle Nigeria, Guinness Nigeria, Cadbury Nigeria, and Unilever Nigeria. These companies distribute the same branded products that are famous in other parts of the world and are an easy way to play the emerging consumer theme.

Most of those investments, though, come with caveats. Sasol and South Africa’s mining companies, for example, are in part dependent on demand from regions outside their home market. Therefore, investors aren’t getting pure Africa exposure. While large, the Nigerian subsidiaries are majority owned by their parent firms. Dodge & Cox International Stock has a 5% exposure to Africa. The fund’s stake is mostly due to its position in Naspers. That firm is a play on the emerging African consumer. However, investors such as Dodge & Cox also own it because it has a 34.7% stake in Tencent, the fast-growing Chinese Internet company.

Off the Beaten Path Still, managers are willing to venture to the continent’s smaller markets.

“The Egyptian market is very vibrant and offers some of the most attractive opportunities in the region,” Bou-Diab says. “The need to encourage investments has political consensus, despite all of the other areas of contention.” He’s been buying banks such as Credit Agricole Egypt and Alahli (which was purchased by Qatar National Bank in 2013). Bou-Diab says these financial institutions have plenty of capacity to grow assets and could benefit from an increase in lending to small and medium-sized companies.

Sebastian Kahlfeld, portfolio manager of the Germany-based Deutsche Invest Africa Fund, recently decreased his fund’s exposure to Nigeria. Kahlfeld trimmed financial holdings in the country because he was uneasy about upcoming elections, mediocre loan growth, and unimpressive returns on equity. “There are simply better opportunities,” he says.

He also began shifting out of companies that have operational assets in Africa but that are almost entirely driven by economies outside the region. In other words, he’s shying away from gold miners, oil drillers, and copper miners. Instead, he added more to positions in companies with a strong exposure to the African consumer. He also recently picked up Ecobank Transnational, a Togo-based bank that has operations in 36 sub-Saharan African countries.

As of Sept. 30, roughly 37% of the Wasatch Frontier Emerging Small Countries was exposed to African companies. Like some of her peers, lead manager Laura Geritz’s largest holdings in the region are designed to give the fund exposure to consumers. Among the fund’s top holdings are Mtn Group and East African Breweries in Kenya. Geritz and her team, though, spend considerable time traveling to lesser-known areas. An example of that are the fund’s holdings in Ghana. That country’s economy stumbled as the price for its chief exports cocoa and gold have fallen. The country has discovered oil, but not as much as had been hoped for. Over the past year, the country’s currency, interest rates, and growth all headed in the wrong direction, Geritz said in a recent shareholder letter. Nevertheless, she is sticking by her holdings because she has confidence management can ride out the downturn. Positions as of the fund’s last filing include Guinness Ghana Breweries, several banks, and Fan Milk, a producer of dairy products.

Going Without There is another strategy for investing in Africa: Don’t own anything headquartered there at all. Investors can scoop up shares of international conglomerates that offer backdoor exposure to the continent because they sell products into those markets.

There’s also the argument that for most investors it is simply too early to invest in Africa. “Most of these countries are full-blown frontier markets,” says Henrik Strabo, portfolio manager of Rainier International Discovery (RISAX). “At this stage, we have more comfort in the political situation and markets in areas like the Philippines and Southeast Asia.”

The Takeaway There’s no doubt Africa holds promise. It’s just a matter of how smooth the ride will be. If countries and their politicians get it right, the region’s economies should continue to grow at impressive rates as infrastructure projects get underway and job creation surges. In turn, that should lead to a compelling emerging middle class in Africa. Investors, though, should brace for some hiccups along the way. Some of the risks of investing there are bound to persist. Investors will experience performance volatility as they ride out any short-term events. In the end, though, the story emerging in Africa is too lucrative to ignore.

“The continent will always have some better or worse stories, but what most countries share is a low starting base, which puts them all together into the bucket of frontier markets,” Deutsche’s Kahlfeld says. “It is a very intriguing market for equities, but the true returns will only be seen over a longer time horizon.”

Note: This article has been corrected since original publication. Originally the legend for Exhibit 1 had mislabeled the lines for India and China. The version above is correct.

This article originally appeared in the December/January 2015 issue of Morningstar magazine. To subscribe, please call 1-800-384-4000.

Rob Wherry does not own (actual or beneficial) shares in any of the securities mentioned above. Find out about Morningstar’s editorial policies.