Finding the lowest-cost exchange-traded product, or ETP, entails more than simply seeking out the one with the lowest expense ratio. The expense ratio is just one component of the total cost of ownership, which can be broken down into trading costs and holding costs. Investors have some degree of control over trading costs, which are made up of things such as the brokerage commission, the bid-ask spread, and the price impact resulting from large trades. On the other hand, the ETP's sponsor and the portfolio manager are largely responsible for the holding costs. In aggregate, holding costs measure an ETP's benchmark-relative performance. The expense ratio tends to be the largest, most explicit, and most stable component of the total cost of holding an ETP. However, there are other factors to consider, including implementation shortfall on the part of the portfolio manager and any potential offset from securities lending. Holding cost is easy to measure, as it entails comparing an ETP's performance to the performance of its benchmark index. In contrast, trading costs can be more difficult to measure. 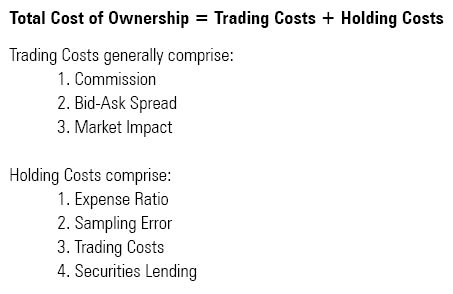