What's the link? Both are run by quantitative analysis. It's funny that some reporters have said fundamental managers are really closest to Billy Beane's Moneyball approach when it's actually quant funds who are like Beane. Beane goes strictly by the numbers--he won't even watch players or A's games for fear that it will cloud his judgment. Likewise, the quants at Bridgeway and other quantitative funds don't meet with management or even care much about what business a stock is in. As John Montgomery told Morningstar recently: "Looking at an individual stock is mildly entertaining but irrelevant."

Quantitative analysis helps both investors and general managers alike to take emotion out and just manage based purely on proven strategies. Quants often discover that the drivers of success are a little bit different from what conventional wisdom says.

Yet quants face their own challenges. They use readily available data that others can gain access to and then figure out the same strategy through their own testing. Computing power is cheap, and in the fund world you have a lot of people and their computers tracking trends and testing new models for finding mispriced stocks. Likewise in sports, quants have been ascendant as teams race to find better ways to predict which players can contribute the most to winning and which of those attributes are selling for the lowest price.

Thus, a quant model's success quickly erodes over time. In late 2003, Moneyball was published, giving the rest of baseball some insights into what was driving Billy Beane's process. Those attributes were quickly bid up, quants were hired by a bunch of teams, and Beane had to work harder to find new statistics that the competition hadn't uncovered. In fact, the team's performance slowly declined. It had two second-place finishes and then a first-place finish in the three years that followed but then two third-place finishes and one last-place finish. It wasn't until this year that it returned to first place. 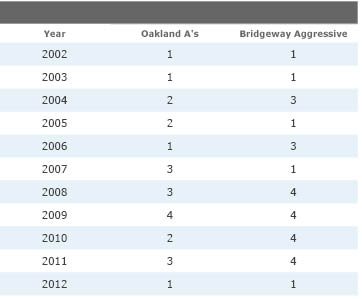 To get a similar figure for Bridgeway Aggressive Investors 1, I looked at its quartile performances. You’ll see a similar pattern. It was strong in the early 2000s then severely slumped from 2008 through 2011. In fact, Bridgeway had another fund where the slump and asset drop were so severe that its performance fee actually forced it to pay money into the fund via a negative expense ratio. It has since merged that fund and another fund away as it retrenches. Montgomery is loath to provide much detail on the firm's quant models, so it's a little different from Beane's case, but there are also many more quants trying to find information edges in stocks than in baseball players.

So, is that similar performance pattern a coincidence? Of course it is. But it does illustrate how hard it is to stay ahead of the pack when you have better-financed competitors who can bring even more quants to work on their models. That's not to suggest that traditional fundamental managers don't face their own challenges--merely that each faces slightly different challenges.

But many managers use quantitative tools for more modest ends where it's less vital to be at the cutting edge. Let's switch gears and look at the sort of quant inputs that are no doubt in your funds.

Risk Controls This is maybe the tool that's most widespread. Managers will use risk-analysis software to ferret out risks that might not be that obvious. For example, they may show how much sensitivity a portfolio has to the economic cycle or a spike in interest rates, and managers can then model possible changes to dial down the risk. Recent bear markets have shown, however, that risk aversion built into a fund's core strategy is more important. For example, T. Rowe Price runs nearly all its funds to the lower-risk side of peers and benchmarks by avoiding big weightings in individual stocks and even in sectors. There also are absolute-return-focused strategies such as those run by First Eagle, FPA, or Mutual Series where every part of the process is geared to paring risk.

Attribution Fund companies run a lot of attribution work on their managers to see what the drivers of success are. The reports tell them if the manager is adding value by each sector and through asset allocation. In some cases it's just a matter of understanding how the fund works, but in other cases it's proscriptive. At Fidelity, where new managers feel their way through the early stages of fund management, attribution is used to understand how managers are investing and where their strengths and weaknesses are. For example, a manager may be good at tech-stock selection but bad at financials. They may help the manager adjust his strategy by either avoiding financials or changing his approach there.

Charting This practice is really old school. Fund managers don't say a lot about it publicly, but quite a few use stock price charts to guide their trade timing. They look for signs the stock is on its way up before buying. The idea is to suss out big demand on either side of the trade and avoid getting caught on the wrong side of a big trade. Some quant funds build some kind of price momentum into their process, too, but you'll see it applied to a wide array of strategies.

Screens Now we're getting closer to the core of the strategy rather than the periphery. Most managers run screens that reflect their strategy to help whittle down the universe to a manageable size. Quite a lot of a manager's strategy can be quantified and built into screens.

Russel Kinnel does not own (actual or beneficial) shares in any of the securities mentioned above. Find out about Morningstar’s editorial policies.