In an annual review of the largest 529 college-savings plans, Morningstar analysts identified 27 plans that are likely to outperform their peers on a risk-adjusted basis over a full market cycle. These plans earned Gold, Silver, or Bronze Morningstar Analyst Ratings, which are forward-looking, qualitative ratings.

The 529 plans earning medals are a diverse group of direct-sold and advisor-sold plans, but all have a strong menu of investment options, solid management, and reasonable fees. The relatively large number of plans earning medals reflects meaningful improvements across the 529 industry in recent years. Very few plans still include options that have performed poorly due to weak management or extremely high fees. As such, only four of the 64 plans rated earned Negative ratings, with 33 plans earning Neutral ratings. Morningstar did not rate 22 of the industry's smallest plans.

Among the medalists, four plans earned a Gold rating, which signals that Morningstar has the highest conviction in the plan's ability to serve college savers well over the long term. Four plans earned Silver ratings. These plans exhibited many industry best practices, though Morningstar has less conviction in their future success. The bulk of the medals were Bronze, awarded to 19 plans; these, too, are likely to outperform the typical 529 plan but aren't as strong as the Gold and Silver plans. 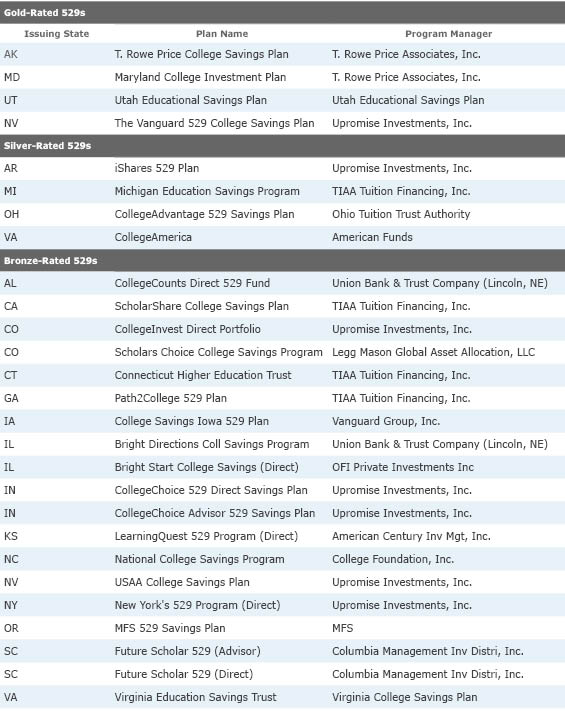 The other two plans earning Gold medals from Morningstar feature passive investments from Vanguard. To be sure, indexing is increasingly common in direct-sold 529 plans like these, but fees vary dramatically from plan to plan.  Utah Educational Savings Plan and  The Vanguard 529 College Savings Plan of Nevada are well-established leaders at keeping costs low. In these plans, college savers have a number of low-cost age-based tracks to choose from that vary their asset allocation based on the savers' risk profiles. A primary difference between these two Gold-rated plans is their respective minimum investment. While Vanguard requires $3,000 to get going in its namesake plan, Utah's offering has no enrollment minimum.

Silver Medalists The plans earning Silver medals are all very strong options. Virginia's  CollegeAmerica, the nation's largest 529 plan at $33 billion of assets, is advisor-sold and managed by American Funds. It features the firm's stalwart fund lineup as well as suites of new static-allocation and age-based options. The plan's fees are near the bottom of the advisor-sold universe, which increases the likelihood that the plan will outperform over the long term.

Another inexpensive advisor-sold plan earned a Silver: Arkansas'  iShares 529 Plan. As its name suggests, the plan includes only exchange-traded funds, which are inexpensive replications of indexes that trade like individual stocks. ETFs have become a popular addition to 529 plans, but iShares has been a pioneer in the ETF-only trend in 529s and has a strong cost-benefit profile.

The remaining two Silver medalists,  CollegeAdvantage 529 Savings Plan of Ohio and  Michigan Education Savings Program, are both direct-sold plans with solid, inexpensive options. CollegeAdvantage mixes managers and investment styles from a number of firms, giving college savers a nice variety of options to consider, all at a fair price. Meanwhile, the Michigan plan offers mostly indexed options run by TIAA-CREF and historically has been a good deal. The plan will cut its fees further in 2013 to become one of the cheapest plans in the nation.

Bronze Medalists The list of plans earning Bronze medals is quite long, as it reflects the broad improvement in investment quality and price across the 529 industry. All of the Bronze-rated plans have well-executed strategies at a fair price. Often what separates a Bronze plan from a Neutral plan are the state's tax benefits. For example, Georgia's  Path2College 529 Plan offers competitively priced options that are made more attractive by the state's income tax deduction on $2,000 of contributions annually. The tax benefits--coupled with a strong plan--make it likely that investors will do better than standard market returns.

Neutral Ratings The bulk of the Morningstar Analyst Ratings issued today are Neutral. The 33 plans earning this rating are not seriously flawed, but in Morningstar's view, they're unlikely to exceed market returns over a full market cycle. College savers who choose a Neutral-rated plan should expect marketlike returns, which is a reasonable outcome. But for those in states with no local tax benefits, it may be worth upgrading to a top-rated plan. 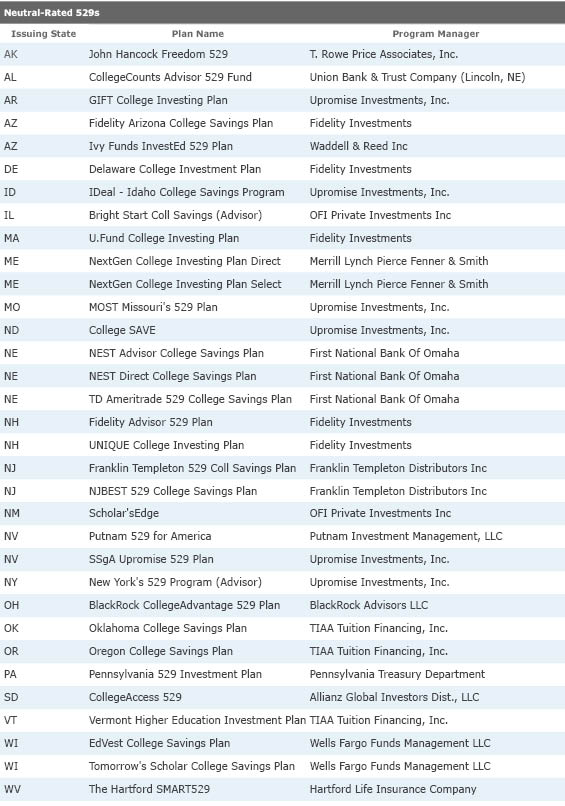 Off the Mark Just four plans earned Negative ratings from Morningstar in 2012. The two plans in Rhode Island's 529 program, CollegeBoundfund (Direct Sold) and CollegeBoundfund (Advisor Sold), have been in Morningstar's basement in the past. Both plans predominantly feature investments from AllianceBernstein, which has struggled on the performance side. The direct-sold plan does contain a handful of sensible Vanguard index funds available only to Rhode Island residents, but the age-based track--popular among do-it-yourselfers--is run by AllianceBernstein.

High fees dull  Minnesota College Savings Plan. There's nothing wrong with the quality of this plan's indexed investments from TIAA-CREF--they just cost too much. The price tag is especially stinging in light of Minnesota's 2010 decision to withdraw a state grant for college savers.

Schwab 529 College Savings Plan also has been hindered by too-high fees. This plan, which is managed by American Century but is distributed and branded by Schwab, has some high-quality strategies like Gold-rated  PIMCO Total Return (PTTRX). But the expense ratios on the options are so high that they make it very unlikely that the plan will outperform over the long term.

In 2011, the Morningstar Analyst Rating for 529 plans employed the same methodology, but the overall rating was expressed as Top, Above Average, Average, Below Average, and Bottom.

Laura Pavlenko Lutton does not own shares in any of the securities mentioned above. Find out about Morningstar’s editorial policies.