We're coming up on the one-year anniversary of the Morningstar Analyst Ratings for funds, and we often receive questions from investors and advisors on how we assign Positive, Neutral, or Negative scores to the five pillars we consider (People, Process, Parent, Performance, and Price). Many are curious about what drives our Parent pillar scores and why they're important.

Just like with Morningstar's Stewardship Grades, we consider corporate culture, board quality, manager ownership, fees, and regulatory history in the Parent rating. We draw on industry knowledge, conversations with fund company leaders, and a wealth of proprietary firm-level data such as firms' average manager tenure, manager retention rates, manager investment levels, average fee level, and success ratio (the percentage of a firm's funds that remain active and outperform their average category rivals). That data speaks to firms' stability, their portfolio managers' incentives, and their funds' cost-competitiveness. The data also suggests that the personalities of parent companies can affect the quality of their mutual funds. Thus, the Parent pillar score is a key part of the Morningstar Analyst Rating.

The Industry Sets the Standard, Not Us There's a huge range in how fund companies stack up, as reflected by the Parent-related data in the table below:

Birds of a Feather The opening line of Tolstoy's Anna Karenina says that all happy families are alike, but each unhappy family is unhappy in its own way. That holds true for the fund companies listed in the table below. 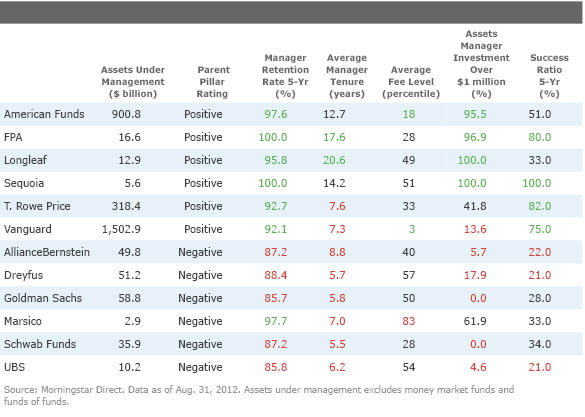 Just as there are no perfect families, it's hard to find a fund company that tops the charts in each of the areas above. Yet, as Tolstoy observed, the fund companies with Positive Parent scores (including those in the table above) tend to share a few traits: They tend to offer longer-tenured managers who have more skin in the game, as well as lower fees and a higher percentage of successful funds.

So Unhappy Together There are some similarities among firms receiving Negative Parent scores, but they tend to score poorly for more-varied reasons. For instance,  AllianceBernstein (AB) and Marsico have both suffered from manager departures. Yet AllianceBernstein has been in transition since Peter Kraus took over in 2008, and the firm's manager ownership is dismal--if a firm's portfolio managers don't own their own funds, why should anyone else? Marsico's manager investment is markedly higher, and a recent debt restructuring gives it a bit more breathing room, but trouble could follow should managers and fund investors continue to head for the exits.

A few of the Negative-rated firms above, such as Schwab,  UBS (UBS), and  Goldman Sachs (GS), feature asset management organizations that are part of much bigger financial services or banking operations. That trait itself is not a recipe for disaster; witness Fidelity and  JPMorgan (JPM), whose fund investors have fared relatively well. Yet UBS and Goldman Sachs have both suffered from uneven fund lineups, resulting in low success ratios. Their manager investment and average manager tenure are also low. Arguably, their asset management organizations have at times been adversely affected by activities in other areas of their parent companies. Schwab is a more optimistic story, in no small part because fund investors constitute a much bigger portion of the firm's overall business. Changes are afoot in the wake of the 2008 implosion of Schwab Yield Plus, but it will take time to know whether the firm's asset management effort has truly turned a corner.

So What, How Do I Use the Parent Pillar? The point here is that Parent-related red flags such as organizational instability, low manager investment, or high fees are not hard to see, and that data drives funds' Parent pillar scores. Given the amount of uncertainty that surrounds investing, limiting or eliminating one's exposure to Negative-rated Parents is one huge risk that investors can control. Some investors won't touch a fund from a Negative-rated Parent, even if they like other characteristics of the fund (myself included). Others may screen funds on the other pillars such as People, Process, or Performance first and consider the Parent pillar afterward as a gut check. Our pillar scores (and in many cases, accompanying text) are now a standard part of our individual fund analyses and available through multiple Morningstar products.

It stands to reason that the Parent pillar is related to the other pillars we assess. In this article we've touched on the connections to Price (low-priced funds) and People (longer tenures, higher retention), and there are connections to Performance as well, which we will explore in a second Fund Spy next week. Whether considered in the early or late stages of choosing a fund, the Parent pillar score provides valuable context and should reduce the chance of unpleasant surprises.

Michael Herbst does not own (actual or beneficial) shares in any of the securities mentioned above. Find out about Morningstar’s editorial policies.