It's good to have a few clubs in your golf bag. One on its own won't get you to the cup. This is one of the logical conclusions from new data that we've run on the predictive power of four mutual fund data points.

We studied the predictive power of expense ratios, the Morningstar Rating for funds, Morningstar Investor Returns, something I call manager returns, and active share. Too often, studies on predictive power fail to account for fund destruction even though more than half of the funds get merged away or liquidated less than 10 years after their creation. Often those funds aren't eliminated because things are going great.

Key to our analysis is a test of success ratios that shows what the chances are that a given measure will lead to funds that survive and outperform their peers. Thus, even the failures that are merged away are counted.

You may recall that last year I shared some results of a study on how the star rating and expense ratio fared at predicting future success. Specifically, I asked what the chances are that a certain group would survive and outperform--the success ratio. The results were pretty encouraging for both. Investors improved their chances of success if they used either star ratings or expenses as part of their process.

I was surprised that some people interpreted that study to mean either the star rating was useless or that actively managed funds were. My guess is that many didn't actually read the study. In fact, the data suggest that the star rating is very helpful. And that study doesn't speak to the success of active versus passive funds. That expense ratios were somewhat more valuable than star ratings hardly invalidated the star rating. If you told me antilock brakes were more valuable than air bags, I'd still want them both. On the second point, the study did not prove that indexing is superior in all circumstances.

Here, I'll focus on how the five measures fared at predicting the success ratio over the ensuing five-year period. We grouped funds into quintiles within category based on data ended Dec. 31, 2005, and then tallied up their performance and survival rates over the next five years. (Note that this is a slightly more recent time period than previously published studies of the subject.)

The data reveal that all five data points tested were at least slightly helpful, but three of them particularly can help investors make better decisions. The star rating, expense ratios, and manager records all helped investors do much better than the average fund over the time period we examined. Yet none consistently led to the best results, and, in combination, two did even better than any single factor.

Screening for funds that were rated 5 stars and in the cheapest quintile of their category yielded a high chance of success. While some have advocated a myopic focus on one data point, the data suggest that more is better, provided you use the right data points.

So, how much do they help? Let's look at how much they improved an investor's chances of success:

Background The star rating is a quantitative measure of load- and risk-adjusted performance. It's based on a fund's trailing three-, five-, and 10-year performance, and it is relative to the category so that each category has a bell-curve distribution of star ratings. There are as many 1-star funds as 5-star.

Expense ratios reflect a fund's fees for management, servicing, and distribution. The fee is spread out over the course of a year so that a bit is charged to shareholders each trading day. The expense ratio does not include stock commissions or front loads.

Morningstar Investor Returns are an asset-weighted measure of past performance that helps explain whether investors are using a fund well. When we came up with the concept, we thought of it as more of a measure of how well investors could handle a fund's ups and downs rather than a predictor of returns, but I wanted to put it to the test for both success ratios and investor returns. I grouped funds into quintiles based on their trailing five-year investor returns within a category for the period ended 2005.

In the case of manager returns, I measured the fund's record since the longest-tenured manager started on the fund and compared that with the category average for the period ended June 30, 2005. The figures were annualized so that we could compare funds within a category. Funds with no manager tenures of five years or more were excluded, and then the remaining funds were grouped into quintiles within each category based on the amount of the managers' under- or outperformance. (To see a fund manager's performance against the fund's prospectus benchmark, go to the Fund Spy selector on the FundInvestor website.

Active share is essentially overlap in reverse. You test to see which index a fund has the greatest overlap with and then you invert that overlap figure. We found that it's important to then look at active share within a category as it doesn't translate well across market cap ranges. In these tests, we ran figures only for domestic equity.

First, let's see how those five measures compared with each other for five asset classes at predicting success ratios over the ensuing five-year periods through the end of 2010. Then we'll see how the winner of that competition fared against the combined low-cost 5-star group. Keep in mind that the success ratio for all funds is around 34%. Roughly 23% of funds were merged away or liquidated over the five-year period in question. Of those that survived, only those that outperformed their peer group averages count as successes. Given the success ratio's criteria, the vast majority of data points wouldn't move the needle on that 34%. However, four of the five data points we tested did much better than that.

How Five Data Points Improve Your Chances of Success 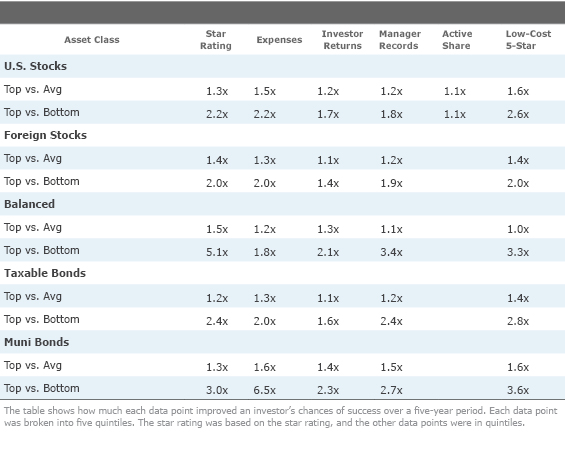 Foreign Stocks Among foreign-stock funds, the pattern was pretty similar. Five-star funds produced a success ratio of 51%. Manager records were third with 46%, expenses were tops with 52%, and investor returns finished fourth with 44%. (Remember, we only ran active share for US stock funds.) Once again, there was a regular step-down as the next-ranked group of each measure was worse (or even in one case) than the top quintile and so on down to the bottom-ranked group. We found that 1-star funds had a miserable success ratio of 26%, manager records were even worse at 25%, expenses were tied for second at 26%, and investor returns were fourth, as its bottom quintile produced a success ratio of 32%. So in this group, expense ratios were the best at separating the wheat from the chaff, followed closely by stars, manager records, and investor returns.

Balanced Funds All four of the measures proved to be quite good at predicting success in balanced funds, but the best measure this time was manager records. The star rating swept the three competitions on this asset class. Balanced funds with a 5 stars enjoyed a 66% success ratio. Next, top-quintile manager returns had a 65% success ratio. The star rating was second at 66%, followed by expense ratios at 52% and investor returns 60%. For predicting failure, 1-star funds did the best at identifying dogs as only 16% survived and outperformed. Manager records fared second best with the bottom quintile leading to a small 20% success ratio, and expenses next at 28% investor returns last at 29%,. The wheat from the chaff test thus led to the star rating having the best results, followed by manager performance, investor returns, and expenses.

Taxable Bonds Overall, these four measures were at their very best predicting success among taxable-bond funds. The star rating led at predicting success, but the manager records were a little better at predicting failure and separating the wheat from the chaff. Fully 68% of 5-star funds went on to survive and outperform over the ensuing five years. Manager records and expense ratios tied for second with a still-strong 67%, followed investor returns at 62%. For predicting failure, the bottom quintile of manager records produced a 27% success ratio. The stars were second at 29%, the expense ratio was third at 33%, followed by investor returns at 40%. Manager returns generated the most separation between top and bottom groups, followed by stars, expenses, and investor returns.

Low-Cost 5-Star Funds Matters improve when we examine the subset of low-cost 5-star funds and see how they perform in the future. If the star rating added no value to expenses or vice versa, then this combination would fare no better than single factors alone. In fact, the combined measure produces higher success ratios for all five asset classes than either stars or expense ratios do on their own. Here are the combined measure's success ratios by asset class: domestic stock 66%, foreign stock 53%, balanced funds 43%, taxable bonds 79%, and muni bonds 71%. That's pretty darn impressive.

The only spot where one of the measures did better on its own was in balanced, where the star rating did well and expense ratios did surprisingly poorly. Thus in this one spot adding an expense screen to stars led to weaker results. The positive side is that adding a star screen to an expense screen helped results by quite a bit.

The Forest for the Trees Looking at the data in the table, you can see that all of these measures help in fund selection. I would caution against focusing exclusively on which measure did the best at a certain time period and for a certain asset class. After all, 1 percentage point better isn't that important. Our study covered a full market cycle and a particularly varied one, but what stands out is that the three measures in particular are valuable to the process of selecting funds and even investor returns helped. Active share added little value when it comes to predicting returns, but I do think it's quite useful for understanding how closely a fund matches an index.

Moreover, there is plenty more to know about a fund: stewardship, strategy, management, and other data are also crucial. This, of course, only touches on selecting good funds, but you first have to have a plan and know what kind of funds you need to reach your goals.

In sum, we've got some very useful data points that can help you reach your goals. Each brings something a little different to the table. They can help you to have a fuller picture of a fund's prospects than any one on its own.