While the majority of pharmaceutical companies are losing patents on major blockbuster drugs over the next five years, strong pipelines should provide stability and growth opportunities over the long run. Investors with long-term horizons could benefit from seeking the firms best-positioned to balance patent expirations with inline product growth and strong pipelines. In a recent Morningstar Healthcare Observer study using Morningstar's proprietary box methodology, we ranked the top 10 pharmaceutical companies on the strength of their pipelines, inline product growth, and patent exposure over the next five years. (The full study is available for purchase here.)

Overall,  Novartis (NVS) achieved the best ranking across all the categories and remains one of our top picks in the pharmaceutical sector. Based solely on the pipeline strength,  GlaxoSmithKline (GSK) appears best positioned over the next five years. At the bottom of the list,  AstraZeneca (AZN) fell to the lowest ranking and remains one of the least attractive pharmaceutical stocks, in our view.

Pipeline Scores: Analyzing Late-Stage Drug CandidatesOur pipeline scores combine the number of drugs under development at each company and weigh drug candidates by market potential, launch timing, and probability of approval. GlaxoSmithKline leads the group as the company holds a very high number of near-term product launches, including human papillomavirus vaccine Cervarix and several new cancer drugs. On the flip side,  Abbott's (ABT) pipeline is relatively weak, and we anticipate the firm will attempt to enhance it in the near future through targeted acquisitions.

Inline Product and Patent Scores: Accessing the Impact of Currently Marketed DrugsOn top of new product development, the growth of currently marketed drugs significantly contributes to valuation and creates the cash flows necessary to fund research and development. We grade inline product growth from drug and product growth outside of pipeline drugs and drugs losing patent protection over the 2009-14 time period.

While new pipeline drugs and currently marketed drugs help paint the growth part of the picture, the patent losses facing pharmaceutical companies largely round out the main drivers of a drug company's top-line growth potential. We ranked pharmaceutical companies' patent exposure by calculating the total number of drugs facing patent losses from 2009-14 and weighing the drugs' sales magnitude, timing of patent losses, and probability that other more remote patents won't hold off generic competition.

Novartis Leads the PackWith the best total score across all our metrics, Novartis scored well with its pipeline, inline products, and patent exposure. Novartis' focus on niche diseases and vaccines catapulted the company to a leading position in pipeline strength. Its generic division, Sandoz, along with several recently launched drugs drive the firm's best inline product growth in the pharmaceutical industry. As a result, Novartis is well positioned to fill the void created by a few significant patent losses over the next five years with new drugs, and it scores the highest on our metric. 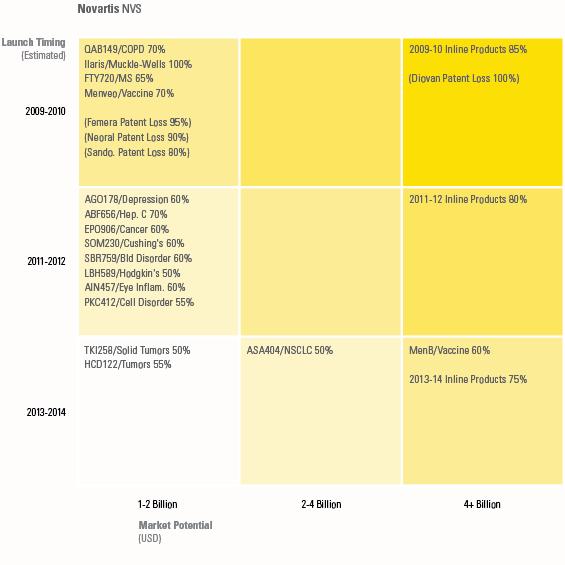 For the complete analysis of pipeline, inline product growth, and patent exposure of each large pharmaceutical company, see the link below.

Damien Conover does not own shares in any of the securities mentioned above. Find out about Morningstar’s editorial policies.