Newspaper stocks have been decimated over the past year, as the Internet continues to steal readers and ad revenue from traditional print media. We think the stocks have further room to fall, as declining revenues and negative operating leverage combine to create a downward spiral for this moribund industry.

The chart below shows the performance of five newspaper stocks over the past year. Such sharp price declines (including a 52% drop for  Gannett (GCI) an 82% dive for  McClatchy (MNI), and a 94% loss for rural/suburban publisher  GateHouse (GHS)), coupled with what may be perceived as currently cheap valuation ratios, could be tempting to value-minded investors, but we say "Look out below!"         Black, White, and Red All Over: Newspapers Drop 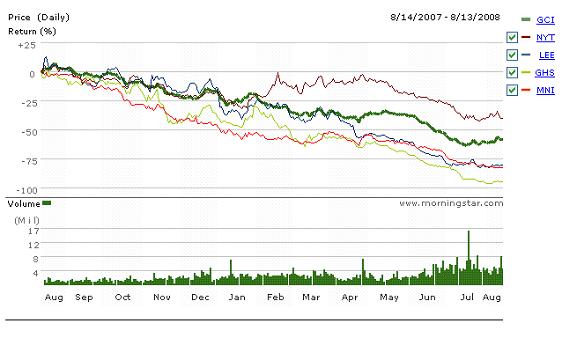 Newspapers have high fixed costs, like journalists' salaries for reporting. It costs the same to produce a newspaper's content whether it has a readership of 1 person or 1 million people. That gives newspapers a high degree of operating leverage: As revenues grow, operating profit grows even faster. Unfortunately, the reverse also holds true. As we expect newspaper revenues to steadily shrink in the coming years, these businesses should feel a disproportionate effect on their bottom lines.

Matthew Coffina does not own shares in any of the securities mentioned above. Find out about Morningstar’s editorial policies.