Two new types of climate benchmarks issued by the European Union have inspired a raft of new climate-aware funds.

In late 2019, the EU adopted new regulations that introduced two climate benchmarks: The EU Climate Transition Benchmark (or EU CTB) and EU Paris-Aligned Benchmark (called the EU PAB). One is more restrictive than the other.

In recent years, with the implementation of the EU Action Plan on Sustainable Finance, the universe of climate-aware funds has grown steadily. Product development reached record highs in 2020, with 52 new products coming to market. It has continued to grow this year. Notable launches in 2020 and 2021 included Paris-aligned funds such as the Amundi Euro iStoxx Climate Paris Aligned PAB, Franklin STOXX Europe 600 Paris Aligned Climate ETF, and the Lyxor S&P Europe Paris-Aligned Climate ETF. Similarly, Amundi MSCI World Climate Transition is an example of a fund aligned with the EU CTB. According to Morningstar data, about 30 such exchange-traded funds were available to European investors as of Oct. 15.

For the EU PAB, the resulting portfolio's greenhouse gas emissions are aligned with the long-term global warming target of the Paris Agreement. Meanwhile, for the EU CTB, the underlying assets are chosen to produce a portfolio whose decarbonization trajectory is in accordance with the minimum standards laid down by the European regulator.

In its 2019 interim report, a group of EU technical experts explained that the two types of benchmarks pursue similar objectives, but have different levels of restrictiveness. “EU PABs are designed for highly ambitious climate-related investment strategies and are characterized by stricter minimum requirements, while EU CTBs allow for greater diversification and serve the needs of institutional investors in their core allocation,” they wrote.

Most climate-aware ETFs in Morningstar’s database replicate an EU PAB and are equity ETFs. We counted only two fixed-income portfolios. The ETFs usually contained the benchmark in the name. For example, in August 2021 HSBC launched the HSBC MSCI Europe Climate Paris Aligned UCITS ETF and the HSBC MSCI USA Climate Paris Aligned UCITS ETF, which replicate the MSCI Europe and USA PAB, respectively.

In term of fund size, the largest ETF in this segment is the Amundi MSCI World Climate Transition CTB with EUR 2.07 billion in assets as of Nov. 4. It replicates the MSCI World Climate Change CTB Select Index, which reweights securities based upon the opportunities and risks associated with the climate transition to meet the EU CTB label minimum requirements. The index aims to reduce its GHG intensity by at least 30% compared with the MSCI World index, and to meet the annual 7% decarbonization target.

According to Morningstar research, 10 out of 31 European ETFs replicating EU climate benchmarks gained the Morningstar Low Carbon designation assigned to portfolios that have low carbon-risk scores and low levels of fossil fuel exposure. The designation is an indicator that the companies held in a portfolio are aligned with the transition to a low-carbon economy.

To receive the designation, a portfolio must meet two criteria: 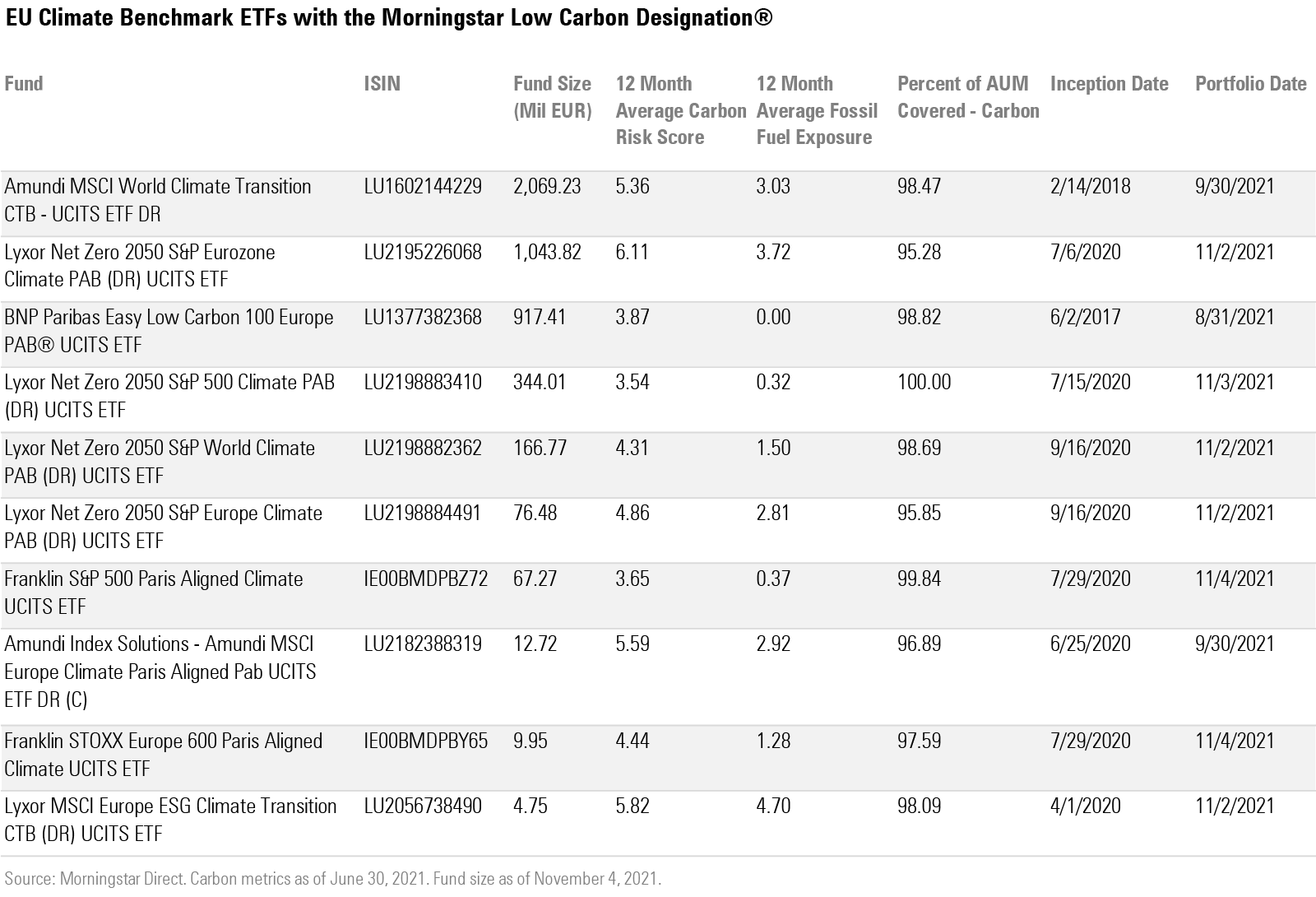 The EU climate benchmarks’ ETFs have a lower carbon risk than their peer groups and a fossil fuel exposure that is well below 7%. BNPP Easy Low Carbon 100 Europe PAB ETF is the only fund with zero fossil fuel involvement. Lyxor Net Zero 2050 S&P500 Climate PAB has the lowest carbon risk score among the ETFs with Low carbon designation. All carbon metrics are as of June 30.

We expect that more ETFs aligned with EU climate benchmarks will receive the designation in the upcoming months, as the availability of data and the coverage increase. Many new funds haven’t yet met the requirements for the calculations, as the designation is based on a 12-month trailing average Morningstar portfolio carbon risk scores and Morningstar portfolio fossil fuel involvement.