After years of struggling, a value-fund revival began in late 2020, and these funds that comb the markets for undervalued stocks held on to their outperformance over growth-stock strategies through midyear.

However, there are signs that the tables are reversing again, or at least turning to a more level playing field between value and growth funds. In June and July, technology stocks--which dominate the portfolios of funds hunting for companies with strong earnings potential--saw their performance improve after stumbling earlier in 2021. Meanwhile, energy stocks--which had helped lift value funds' returns as oil prices rose amid expectations for an economic revival--fell back on a drop on oil in July.

Still, if value funds are able to hold a performance advantage through the end of 2021, it will mark the first time since 2016 that was the case.

As of June 30, value's lead over growth varied widely across different market capitalizations. Small-value funds led over growth by 14.8 percentage points, but large-cap value funds led by only 4.7 percentage points. Performance has diverged the widest for small-cap funds. Small-value funds were up 27.0% in the first six months of the year, while small-growth funds averaged only a 12.2% return, a nearly 15-percentage-point gap.

In the following heatmap, we compare the average annual returns of the value and growth Morningstar Categories among U.S. diversified stock funds. For the purposes of the images in this article, red reflects time periods where value funds delivered weaker returns than growth funds, and green reflects value fund outperformance. The intensity of the red or green reflects the degree of outperformance or underperformance.

The heatmap shows that the revival in value funds was long in coming, and that 2020 marked the worst year on record for large-value performance relative to large growth funds. (Morningstar Direct clients can download a PDF version of our value vs. growth heatmaps here.) 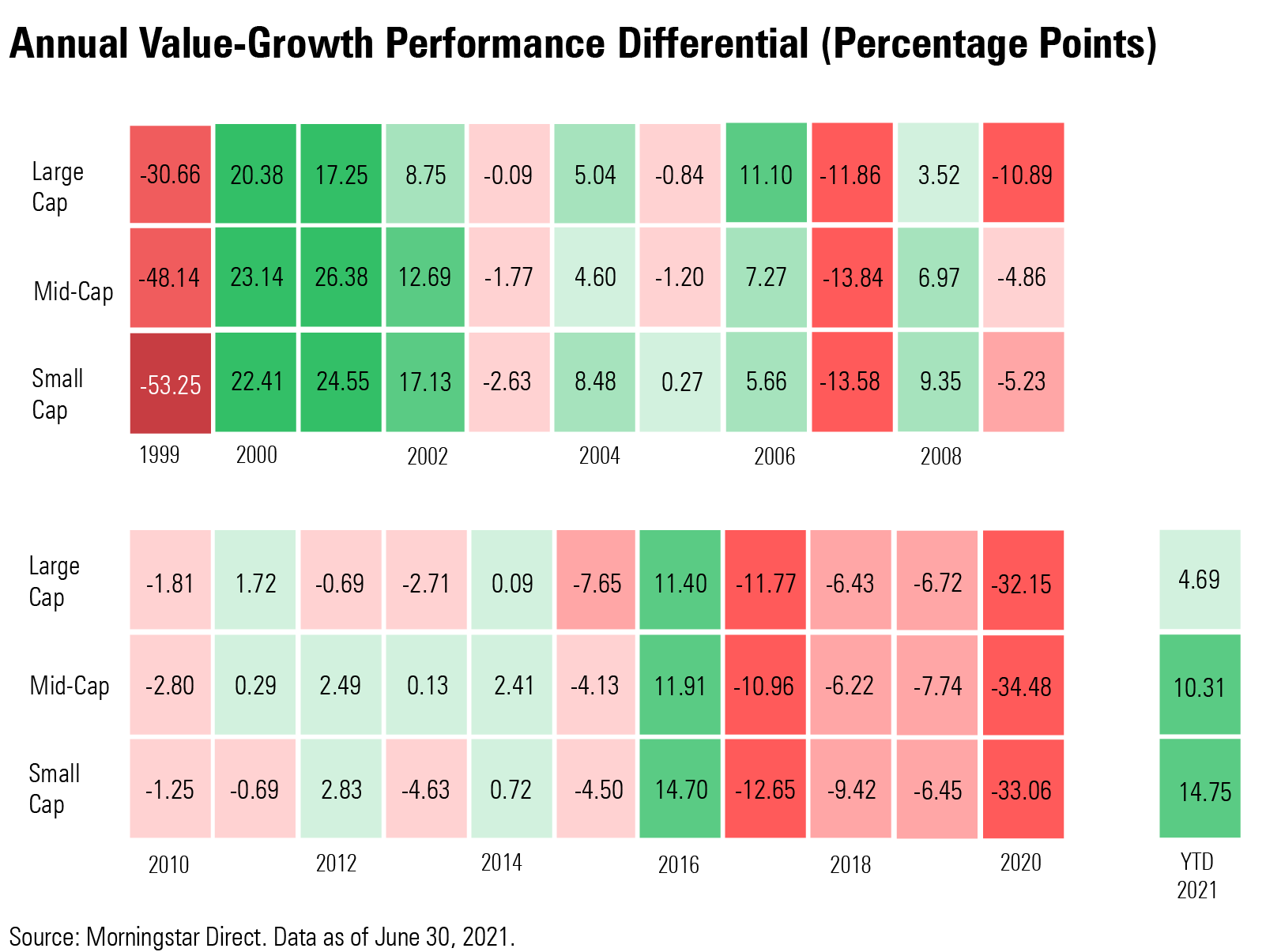 Three deep-value strategies that rose to the top of the large-value category in the first quarter have stayed on top. Poplar Forest Partners (PFPFX) and Hotchkis & Wiley Large Cap Value (HWLCX) rank in the top 5% of large value funds over the past year. As of Sept. 30, 2020, they ranked in the worst quintile of large-value funds.

It's a similar story on the growth side. Portfolios tilted toward less expensive stocks have held up better than more high-growth-oriented funds in 2021. Natixis U.S. Equity Opportunities (NEFSX) and Primecap Odyssey Growth (POGRX) both carry higher-growth scores than the average large-growth fund and went from the worst 20% in the category to the best 20% over the course of nine months. As of June, they ranked in the 15th and 12th percentiles in the large-growth category for one-year returns; as of September 2020 they both ranked in the bottom 20%.

While value funds remain ahead, it's been an uneven path on a month-to-month and quarterly basis. Value funds posted their best quarter versus growth in 20 years in the first quarter as the energy and financial-services sectors soared as interest rates rose and inflation fears were widespread. But in the second quarter, revised inflation expectations, a steep decline in 10-year Treasury rates, and the possibility of a slower economic recovery jilted investors, and they returned to growth funds. Strong tech earnings also bolstered growth funds in the second quarter. 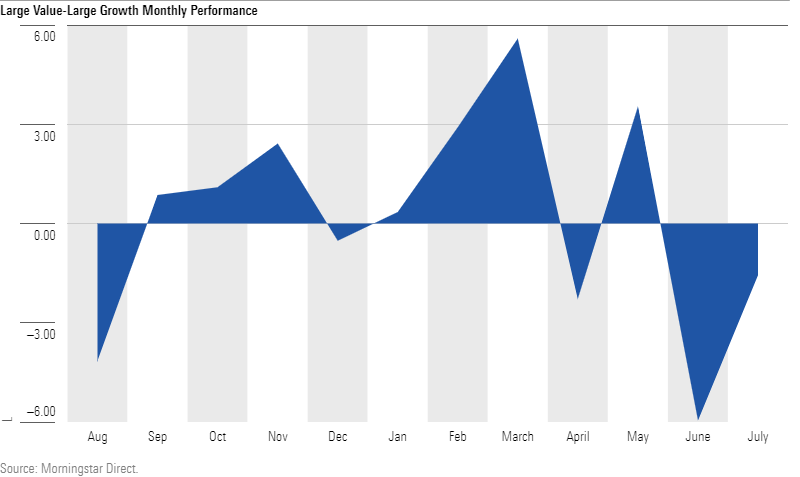 And in July, for the first time since last year, U.S. growth equity funds outperformed value funds in consecutive months. 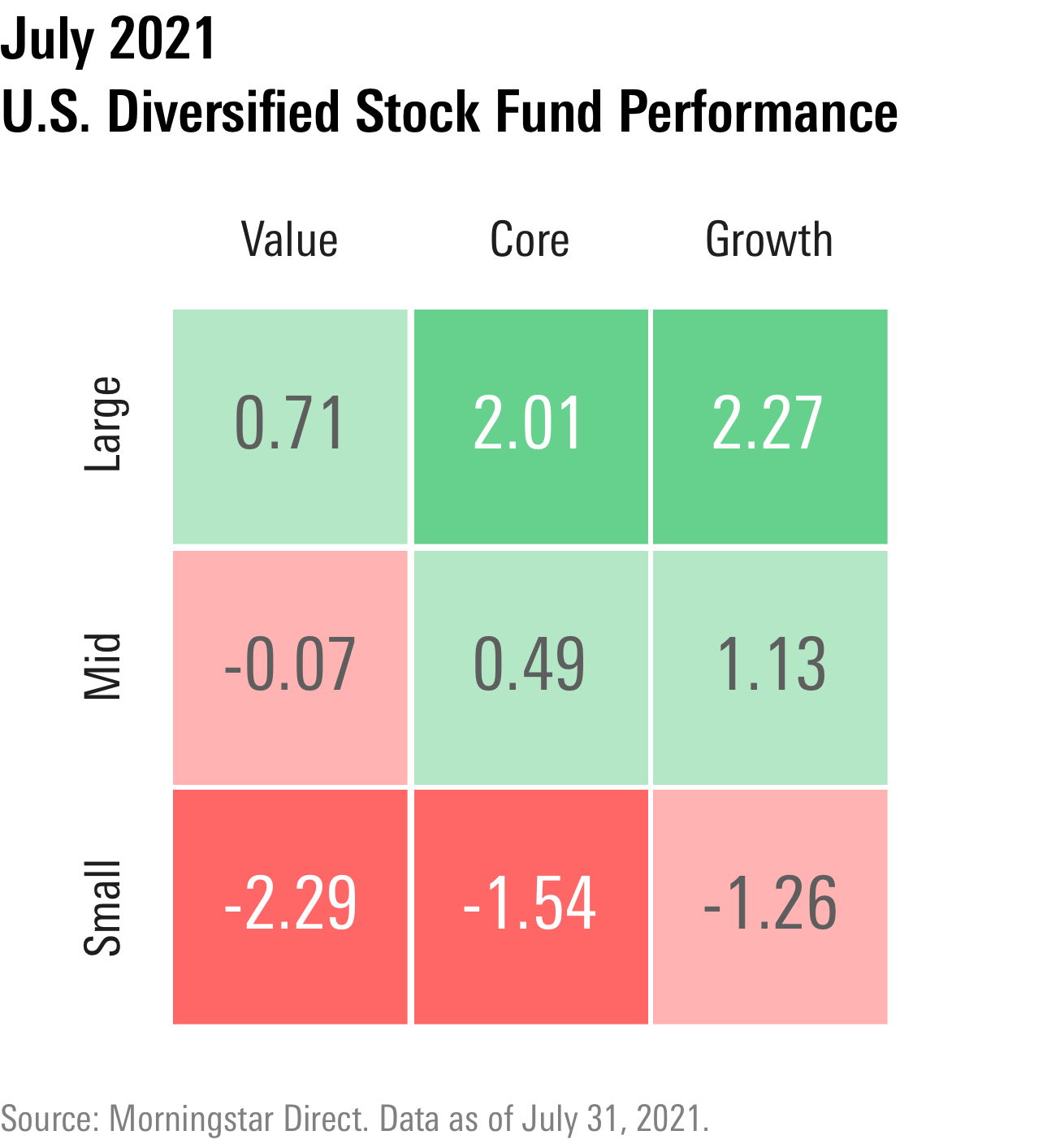 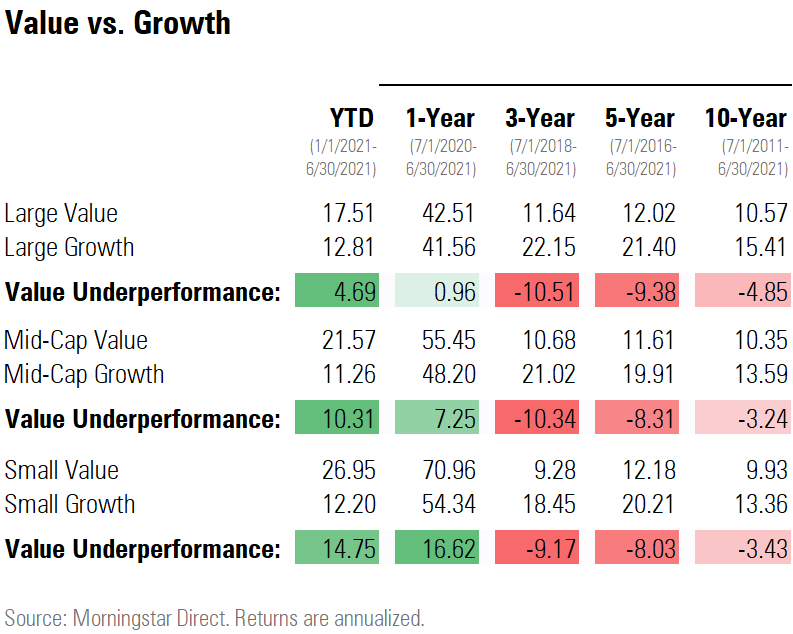 The past five years have been particularly painful for value funds. After a strong year in 2016, they entered a four-year stretch of underperformance.

Still, the strong first half of the year made up some ground in the longer-term returns for small- and mid-cap value funds versus their growth counterparts. Small-value funds trailed small-growth funds by 92 percentage points over the 10-year period as of June 30. And while still a massive gap, it was a 36-percentage-point decline from the end of 2020.

Mid-cap funds show the narrowest gap for the past decade, as value funds now lag by 90 percentage points, a 24-percentage-point decline from the end of 2020. For large-cap value funds, which have only gained 5% on growth funds in 2021, the 10-year differential remains wide--large value lags large growth by 146 percentage points, the largest gap since 1999 for large-cap stocks.