As U.S. equities rallied during the second quarter, energy and technology names dominated the list of best-performing U.S.-listed stocks covered by Morningstar analysts. 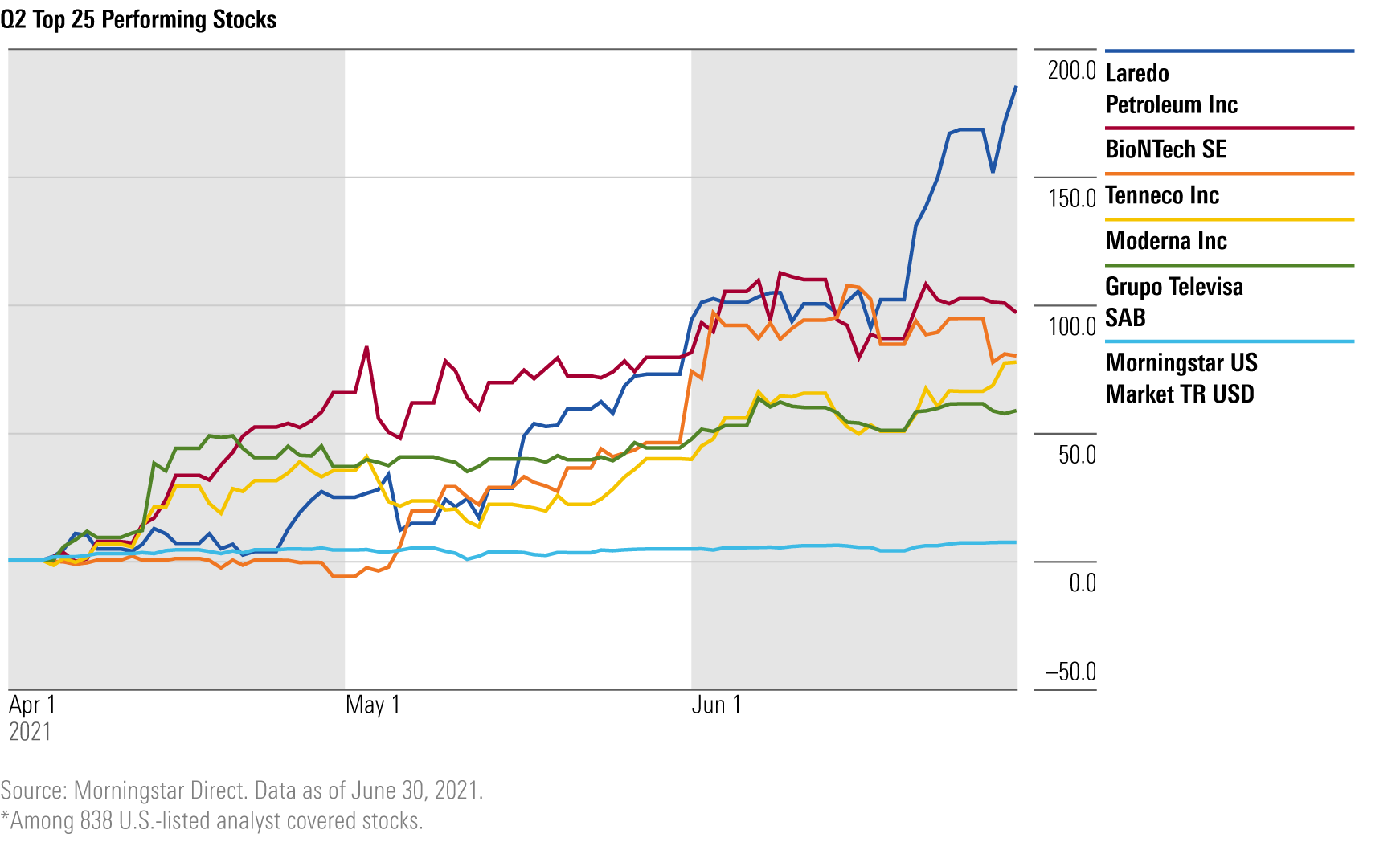 With these gains, some of the leading stocks have moved well above their fundamental values, according to Morningstar analysts. Laredo Petroleum finished the quarter at a 181% premium to its fair value. Healthcare sector strategist Karen Anderson sees BioNTech overvalued at by 61% at its second-quarter closing price, and Moderna (MRNA) as overvalued by 101%.

Grupo Televisa SAB (TV) is solidly within its fair value range, according to analyst Neil Macker. For investors looking for stocks with momentum that have yet to reach their fair value, both Tenneco and Macerich MAC trade at a 38% discount. Tenneco was the third-best performer in our U.S.-listed coverage list while Macerich finished in sixth place. (Morningstar Direct and Office clients can find our analysts full quarterly stock market outlook report here).

Pulling back the lens, the second quarter saw an extension of the first-quarter gains in energy stocks, and a revival in technology names after a weak first quarter. Those two sectors combined to fill more than half the slots in the top 25 performing stocks during the April-June period. 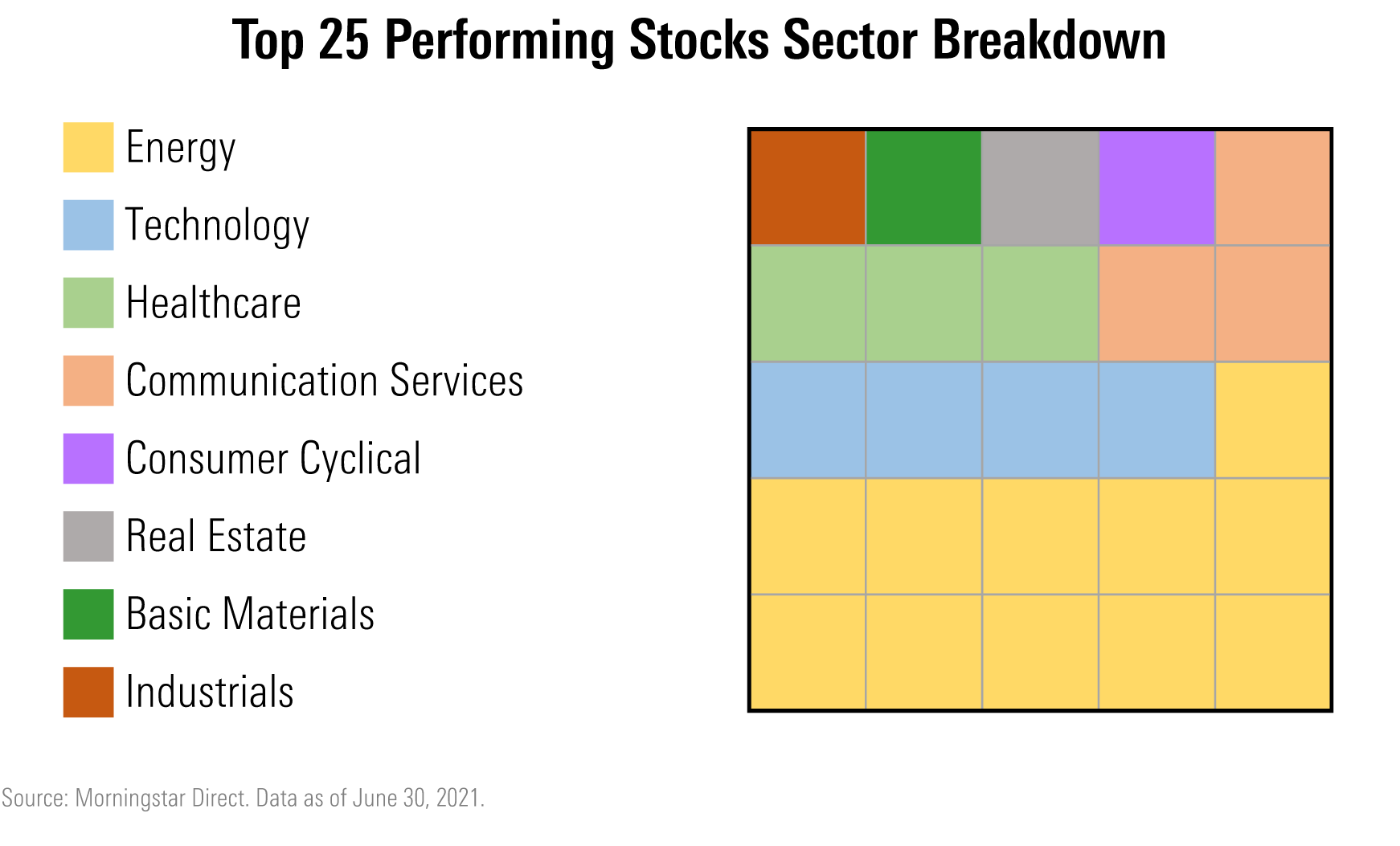 The energy winners for the quarter were predominantly small- and mid-cap stocks. They included Petroleo Brasileiro SA Petrobras (PBR), Targa Resources (TRGP), Range Resources (RRC), and Continental Resources (CLR), each of which posted returns in excess of 35%. Morningstar’s energy sector director David Meats says much of the strong performance of many energy names ties back to their high operating and financial leverage that are characteristic of these companies. Higher oil prices bolstered the revenues for most oil companies, but those with the highest leverages stood to expand their margins the most. 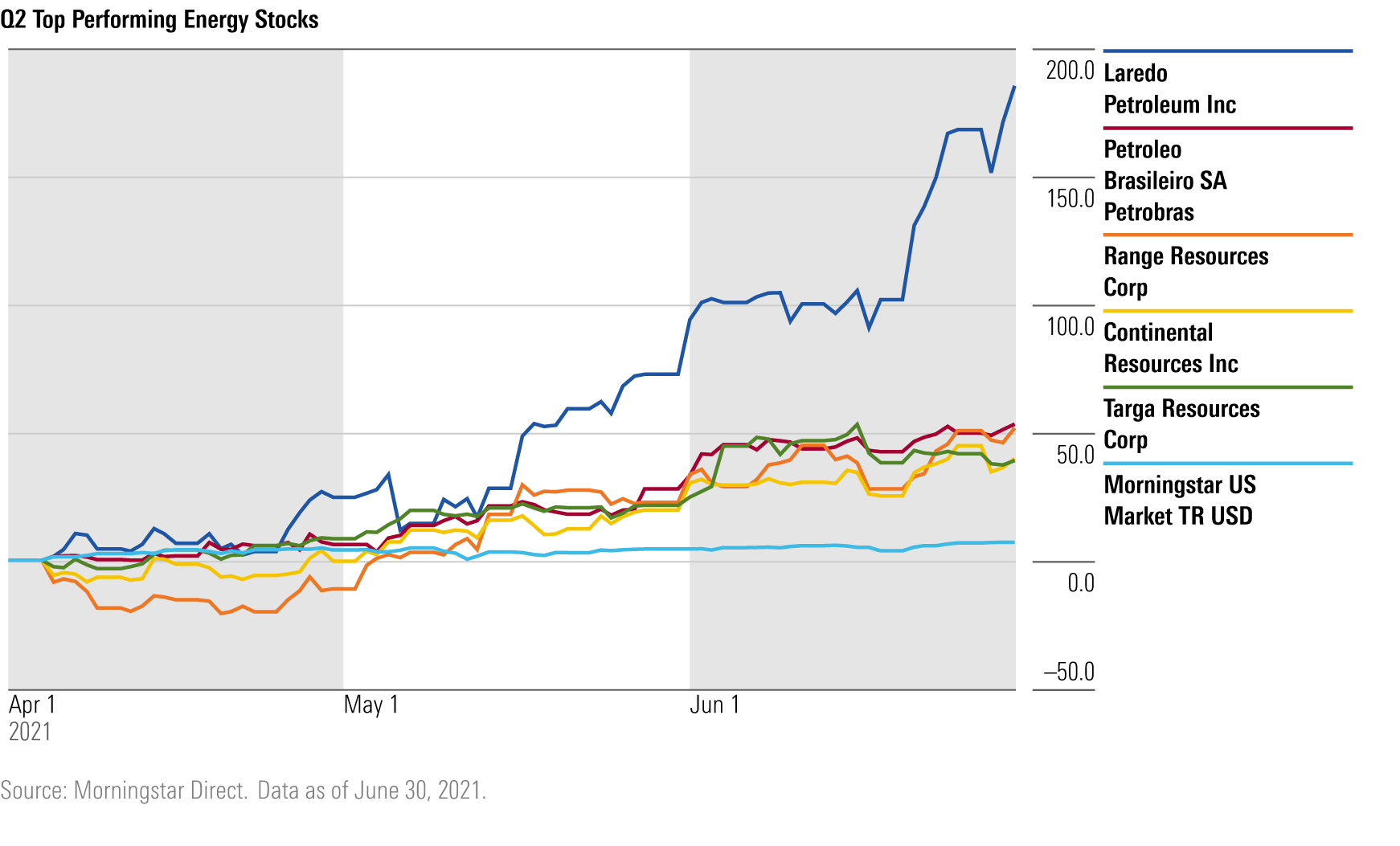 However, Meats and his team see current oil prices as frothy. They forecast a midcycle price of $55 per barrel, 33% below current West Texas Intermediate benchmark levels. “Without an abrupt change in strategy from OPEC or the U.S. shale industry, the oil markets will remain tight this year,” he says. As a result, many of these oil stocks ended the quarter overvalued. However, our current fair values are rated with extreme uncertainty--meaning current market conditions make it difficult to confidently value these energy companies. 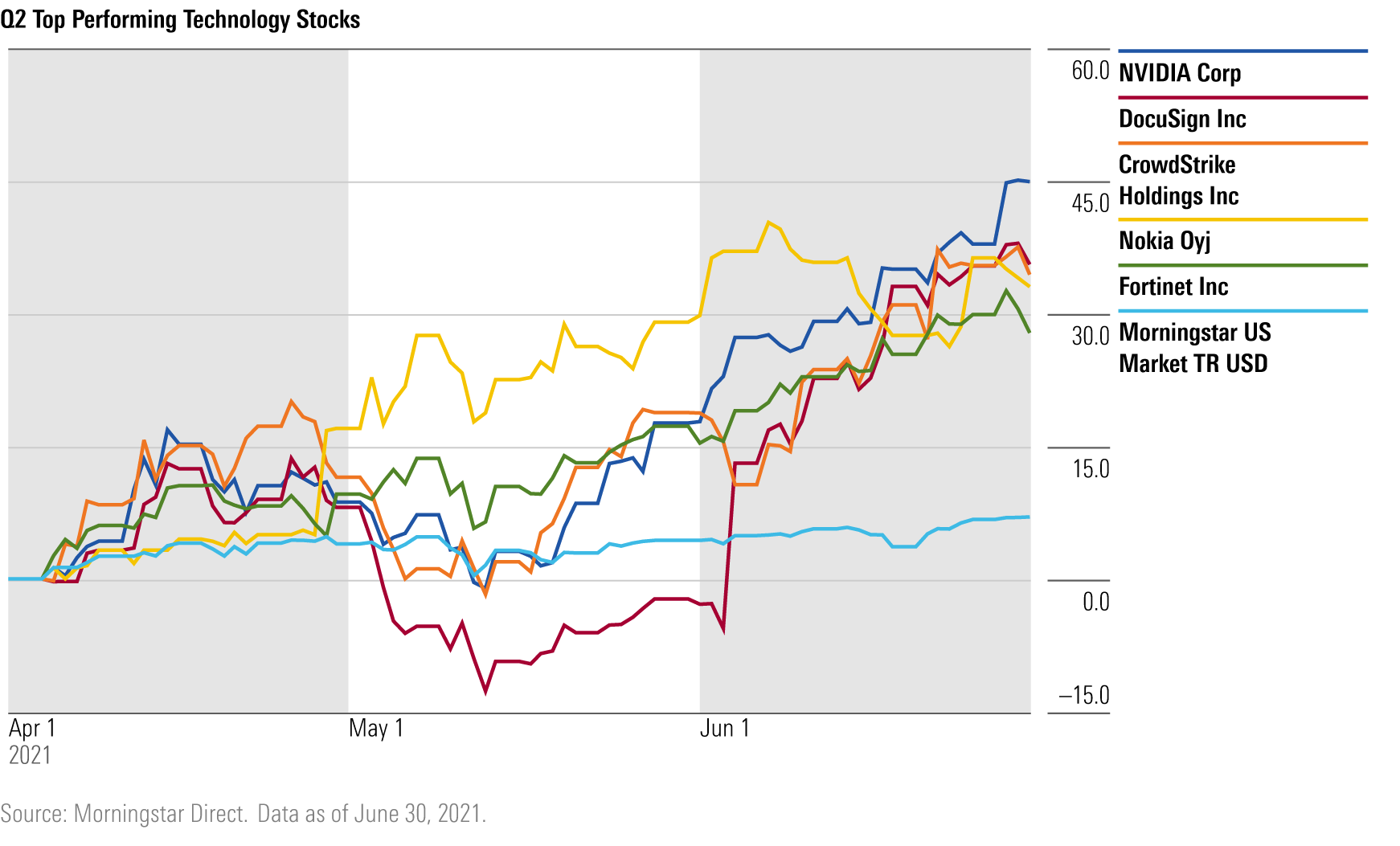 Among tech stocks, NVIDIA (NVDA) led the group with a 44.8% return for the quarter. The graphics card giant has surged in the last year following increased demand for its products due to interests in crypto mining. Sector strategist Abhinav Davuluri pegs NVIDIA’s end-of-quarter share price as too expensive, trading 45% premium, even if the company’s proposed deal to acquire British chipmaker Arm is approved by regulators and leads to a higher fair value estimate for the NVIDIA stock.

DocuSign (DOCU) rose 35.5%, leaving the stock at a 38% premium to its fair value estimate.

Nokia Oyj (NOK), the only company in the top five performing tech stocks to be considered fairly valued as of the end of the second quarter, returned 33.0%.

Tech stocks in the cybersecurity industry also rallied strongly in the second quarter following the slew of high-profile ransomware attacks. According to senior equity analyst Mark Cash, the heightened threat environment provided a tailwind to several stocks in the industry. The best performing cybersecurity stock in the second quarter were CrowdStrike Holdings (CRWD), up 33%, and Fortinet (FTNT), up 27.8%. Cash pegs these stocks are overvalued, however, with CrowdStrike trading at a 44% premium at the end of the quarter and Fortinet at a 29% premium. 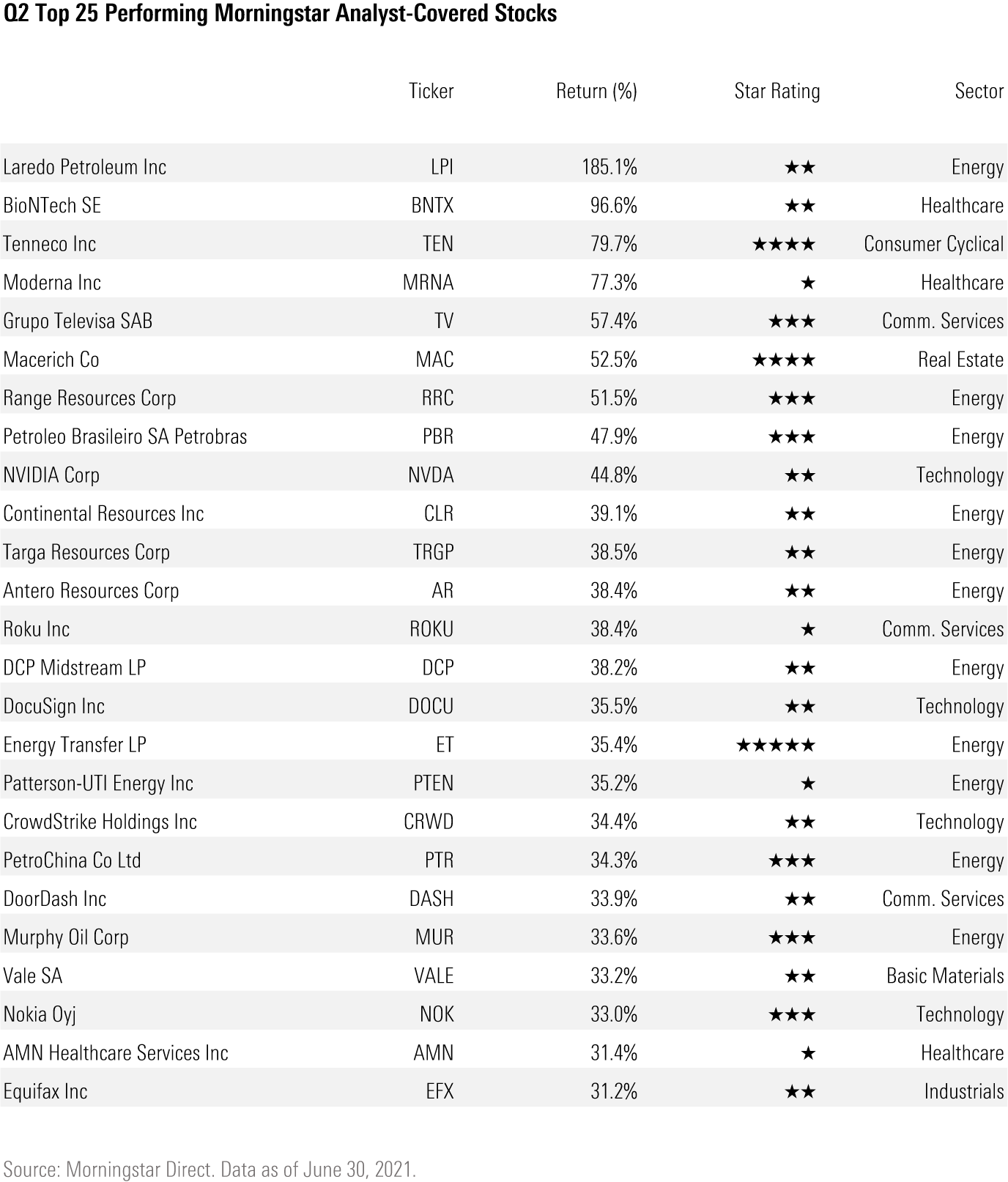 Jakir Hossain does not own (actual or beneficial) shares in any of the securities mentioned above. Find out about Morningstar’s editorial policies.