This article was originally published on May 28, 2021.

Let’s start at the beginning, which is the proper place for authors not named Homer, Virgil, or Milton.

Those who retire with investment assets, as opposed to living solely on Social Security and/or pension benefits, face two choices: 1) invest for income, thereby maintaining the portfolio’s principal; or 2) invest for total return, which involves dipping into the capital base as required. As the former strategy has drawbacks even under the best of circumstances, researchers typically study the latter.

For this column, I created an initial case, which is not particularly helpful in isolation, because its assumptions will be incorrect (if I knew how investments would perform over the next three decades, Morningstar’s CEO would report to me). However, it is useful for analyzing changes. If altering a number doesn’t much affect the outcome, then that factor isn’t terribly important. If, on the other hand, the estimate greatly increases (or declines), then the item merits attention.

The assumptions are: 1) 7% annual return (returns are arithmetic nominal, and the investor is assumed to hold very low-cost index funds); 2) 8% annual standard deviation; 3) 3% annual inflation; 4) a 30-year time horizon; 5) withdrawals automatically adjusted for the growth of inflation, such that they remain constant in real terms; and 6) a 90% probability of success for the model’s simulations. That is, the scheduled amount can be withdrawn for the full 30 years in at least 900 of the 1,000 trials. Each year’s portfolio return is generated randomly, using the specified inputs and assuming a normal distribution.

This calculation produces an initial withdrawal rate of 4.0%. Thus, for a $500,000 portfolio, the retiree could withdraw $20,000 at the beginning of Year 1. The next year, she could spend $20,600--the original amount plus a 3% upwards adjustment, to account for inflation. Again, what matters is not that the forecast is 4.0%, but instead what happens to that number as we tinker with the assumptions.

First, let’s see how the withdrawal rate improves with portfolio performance. The ability to affect investment results does not necessarily lie within retirees’ hands, but it’s instructive to understand their magnitude, because they almost certainly will occur, albeit involuntarily. After all, the financial markets will not duplicate anybody’s precise expectations.

Exhibit 1 below shows what happens when: 1) the portfolio’s annualized rate of return is raised by 1 percentage point, from 7% to 8%; 2) its annual standard deviation is reduced by 2 percentage points, from 8% to 6%; and 3) when the two changes occur simultaneously. 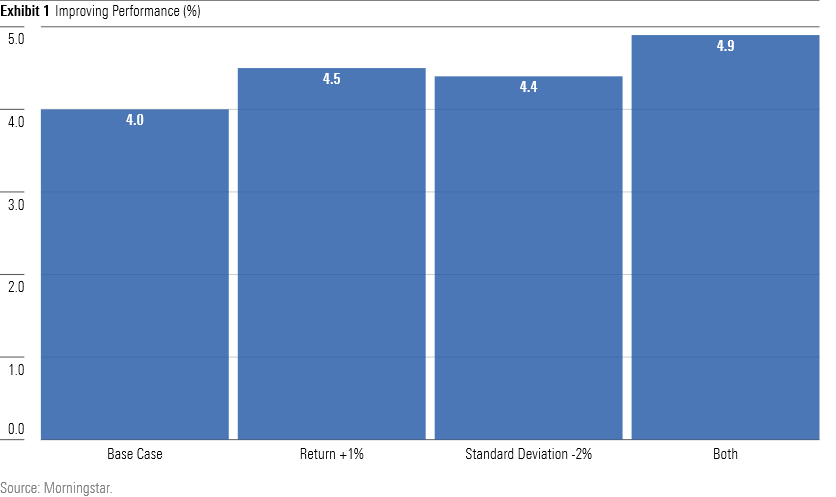 That’s a pleasant conclusion. If the portfolio achieves both goals by posting modestly higher gains, along with dampened volatility, our hypothetical investor can withdraw a constant 4.5% in real terms, meaning $22,500 out of the gate, as opposed to the previous rate of 4.0%, or $20,000. That’s a significant uptick in spending power. Regrettably, regardless of the investor’s savvy, the markets could behave otherwise, thereby lowering her withdrawal rate. Performance is a potent tool, but it cuts both ways, and is difficult to predict.

Investors are likely to have more control over when they retire than over their investment results. Therefore, a more-reliable path for elevating one’s retirement withdrawal amount is to work longer. Doing so confers two advantages. First, the investor has that much longer to grow her portfolio. Second, the expected retirement horizon becomes that much shorter, which increases the likelihood that the portfolio will be able to fund its obligation.

Exhibit 2 illustrates what occurs if the retiree works two additional years. (This projection, of course, does not include ancillary effects, such as postponing the inception of Social Security benefits.) The first figure shows the benefit that accrues solely from increasing the size of the retirement portfolio, while maintaining the original goal of withdrawing a constant $20,000 per year, in real terms. The second estimate includes the effect of shrinking the anticipated retirement horizon from 30 years to 28 years. 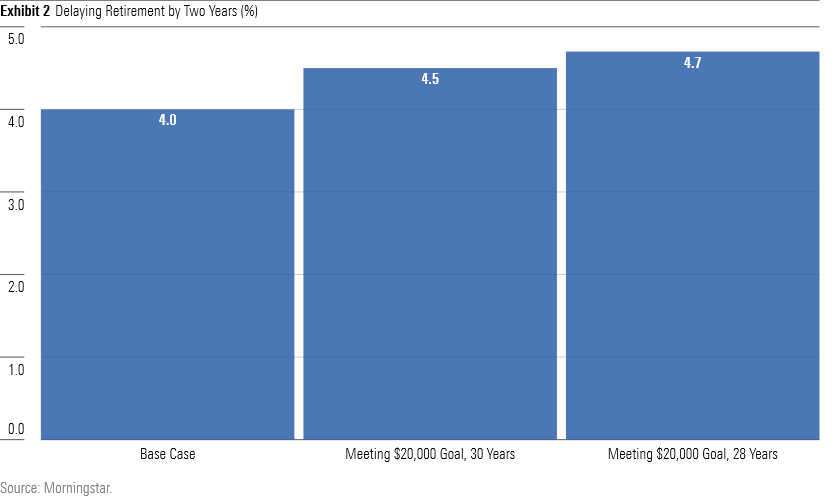 The outcome roughly matches that from the previous exercise. Applying one of the factors boosts the acceptable withdrawal rate from 4.0% to 4.5%. Adding the second factor provides further gain. Working longer is not permitted by every employer, and involves considerably more effort than conjuring better investment performance, but it nevertheless offers a meaningful benefit.

But … there is a third path, one that has quietly been adopted by most retirees: Concede some ground to inflation. States Morningstar’s David Blanchett, who has extensively studied the topic, “Retirees don’t tend to increase spending/consumption throughout retirement by the full amount of inflation. It declines between 1% and 2% per year in real terms throughout retirement.”

In other words, although researchers invariably build models that assume that retirees will maintain constant inflation-adjusted withdrawal rates, retirees are not so doctrinaire. Presumably, most realize that if they don’t increase their spending at the full rate of inflation, they will effectively reduce their income. Big deal. The decline occurs gradually, and usually the forgone income is not missed, because as time passes, the retirees usually has less need for income anyway.

And the effect is substantial. 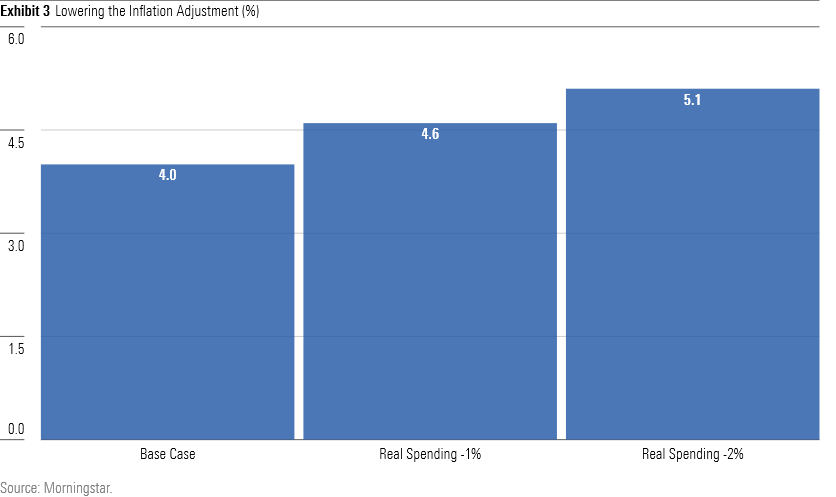 Permitting inflation to grow at 1 percentage point per year faster than consumption raises the model’s estimated withdrawal rate from 4% to 4.6%. Doubling the deficit hikes the model’s estimate to a robust 5.1%. Of course, adopting that approach doesn’t provide something for nothing. Although the erosion in purchasing power is at first imperceptible, after several years it becomes noticeable. Then again, the increase in the initial withdrawal rate is also perceptible. Forgo something later, receive more today.

Retirement-income projections typically incorporate a string of conservative assumptions. Never cut spending in response to market results. Seek a very high probability of success. Always raise spending by the full amount of inflation. Such prescriptions are fine for those who can afford them. Most retirees, though, will require more bang for their bucks, by stretching the researchers’ rules. Instinctively, it seems, retirees have recognized their need--and have made the sound decision to address it by refusing to keep entirely apace with inflation.