Over the decades, retirees have been able to withdraw ever-increasing amounts of income from their portfolios. But have the festivities finally run their course?

Assuming a 30-year horizon, there have been three retiree groups during the past 90 years--those who started their retirements in 1930, 1960, and 1990, respectively. Each fared better than its predecessor. Those who retired in 1960 were able to outspend those from 1930. One generation later, retirees from 1990 placed comfortably ahead of 1960's cohort.

The evidence for this assertion appears below. I constructed a model that calculated the highest acceptable withdrawal rate that each generation's retirees could have achieved from their portfolios, with a 90%-plus success rate, assuming 1) they invested half their assets in stocks and half in bonds; 2) their annual withdrawals grew by the rate of inflation (unless the previous year's portfolio return was negative, in which case they temporarily reduced their spending), and 3) they sought 30 years' worth of income. 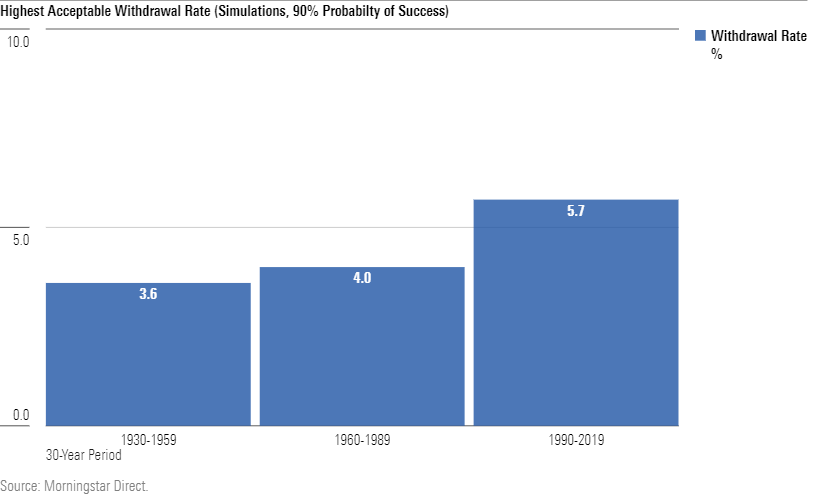 (These results differ from those in Bill Bengen's landmark 1994 paper, which reported that retirees could have always managed a 4% withdrawal rate. The difference occurs because Bengen evaluated actual market history, whereas my study adopts the newer approach of creating simulations based on said history, which greatly increases the test's sample size. No worries. What matters for this discussion is not the size of the estimate, but rather how it changes over time.

Another take on the topic arrived much more recently, from Morningstar's Amy Arnott. Her analysis takes a different approach, while using a different model, but it is nevertheless complementary.)

That the class of 1930 fared worst comes as no shock. After all, its members retired five months into the Great Depression. However, while one might think that the group's main problem was lower equity returns, such was not the case. Quite the contrary. Real equity returns for 1930's retirees were the best among the three generations. 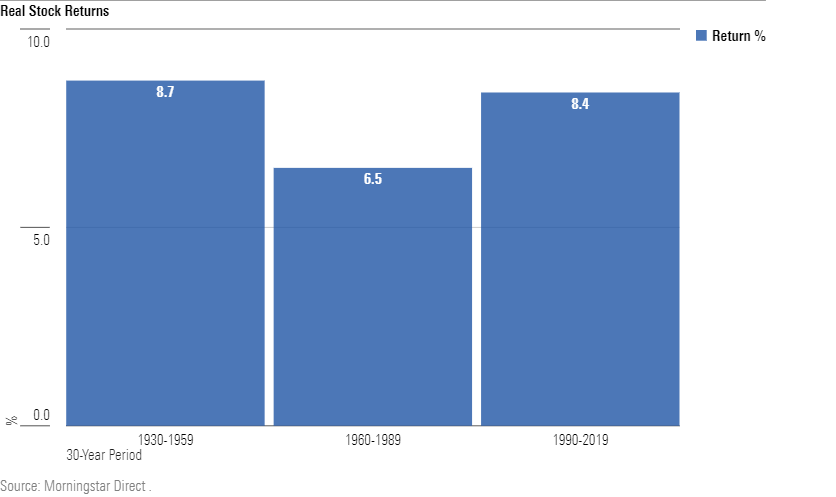 At first, this seems scarcely credible. After all, the S&P 500 dropped 25% in 1930, 43% the following year, and another 35% in 1937. Then it suffered consecutive annual losses from 1939 through 1941. How could the index's 30-year gains have been stronger while enduring the Great Depression than during its most recent stretch, which included the longest stock bull market in U.S. history, from 2009 through early 2020, and the second-longest, which occurred during the 1990s?

The answer is twofold. First, although equity performances during the '30s were indeed dismal, they were outstanding from 1942 through the late 1950s (and indeed, well into the 1960s). Second, those Great Depression results weren't quite as bad as they looked, as their real returns were buoyed by deflation.

What harmed the Great Depression's retirees was not the level of stock returns, but instead the damage caused by those returns' volatility. An average annualized real profit of 8.7% is excellent. However, if those gains arrive very unevenly, then their rewards may be nullified by bad timing, when retirees are forced to remove assets from a severely diminished portfolio. Such actions increase the chance that the portfolio will become depleted before meeting its investment goals.

That possibility certainly threatened 1930's retirees. Once the United States entered World War II, though, the stock market became much less turbulent. The following graph depicts the annualized standard deviations for U.S. equities during each of the three 30-year periods. Starting in about 1940, stock returns abruptly became much calmer. With only brief disruptions, they have remained so ever since.

Besides benefiting from lower stock volatility, the class of 1960 received somewhat higher real bond returns, thanks to the bond bull market of the 1980s. Those two factors combined to boost the group's acceptable withdrawal rate from 3.6% to 4.0%. Otherwise, the portfolios did not outperform those of their parents. Their stocks gained less, their bonds were more volatile, and inflation rose, the latter of which increased their required withdrawal amounts.

The class of 1990 looked unlikely to outdo its forebears. Although inflation had subsided, it still hovered in a range of 3% to 4%, which was well above what the Great Depression's retirees had experienced. Nor did the benefits of higher stock market returns and/or lower volatility appear probable. Equities had already performed very well since 1940; asking more from them seemed unrealistic.

Such analysis was mostly correct. Although real equity returns did improve somewhat during the next 30 years, and stock and bond volatilities slightly decreased, such effects were modest. The extraordinary success enjoyed by 1990's retirees owed to a different reason: By the end of the period, inflation had virtually disappeared, which led bonds to post unprecedentedly high real returns. 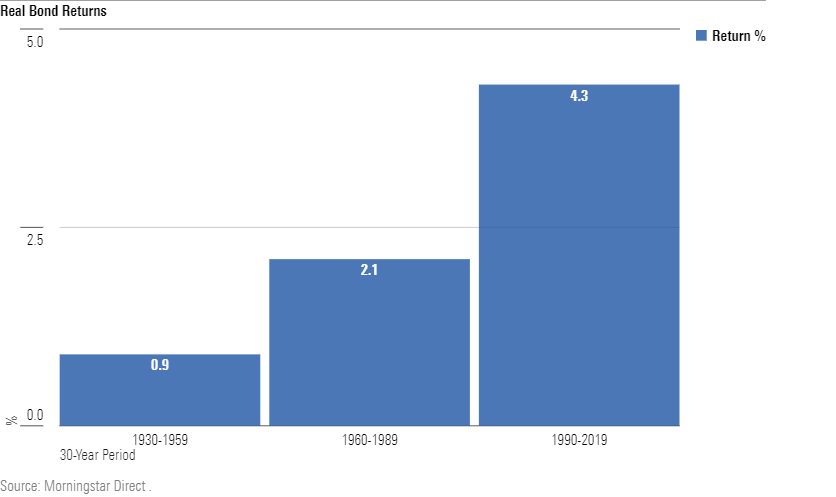 The conditions that held from 1990 through 2019 may not have represented the best of all possible worlds for retirement investors, but they surely shared the same solar system. Stock returns remained healthy, both because the economic booms were long and the busts short, and because lower inflation made equities that much more attractive. Meanwhile, bonds also performed well. During those 30 years, the 50/50 portfolio returned almost 9% per year, while annual inflation averaged less than 2%. Talk about the Golden Years!

Given that almost all forecasts from 1990 overstated the problems facing that era's retirees, I hesitate to predict failure for the class of 2020. Almost certainly, today's newly minted retirees will not receive such high bond returns. (For that happy event to occur, fixed-income yields would need to rise substantially, even as inflation remained relatively calm.) But it's possible that equity returns could nudge even higher, with volatility receding even further.

That, however, is not the way to bet. The investment markets have twice been generous to incoming retirees, first by sharply reducing stock market volatility, and then by fattening the returns of their fixed-income holdings. The third time is unlikely to be a charm.