The racial wealth gap in America is large and obstinate. According to the Survey of Consumer Finances, the average white family had more than 7 times the wealth of the average Black family in 2019. This ratio has been close to constant for nearly 60 years.

One policy solution that could address this and help the next generation of people of color build wealth is "baby bonds."

First proposed by Darrick Hamilton and William Darity, the policy would have the government contribute to savings accounts for children under 18, with the size of the contributions determined by family income or wealth. When a recipient turns 18, the money can go toward certain uses, such as paying for college or buying a house.

In previous research, we showed that income-based baby bond programs, while race-blind, can meaningfully reduce the gap between Black and white households in median wealth available for each child. In sum, these programs would give a boost to millions of children of all races, while also closing the racial wealth gap for young adults.

But all of the proposals to date would use Treasury bonds as an accumulation vehicle. Why not consider helping all families invest the way wealthy ones do: through riskier assets such as equities?

In a recent paper, we examined the extent to which investing the baby bond accounts in riskier assets would close the racial wealth gap under various market conditions. The findings illustrate the benefits of investing in riskier assets, given a reasonable investment strategy and an 18-year time horizon.

The chart below shows the difference in the racial wealth gap before simulating the effect of introducing baby bonds and after, when investment performance is at the 5th percentile of the distribution of possible outcomes. Even after an uncommonly poor sequence of returns, the racial wealth gap would still close by more than a third in terms of resources available per child at age 18. 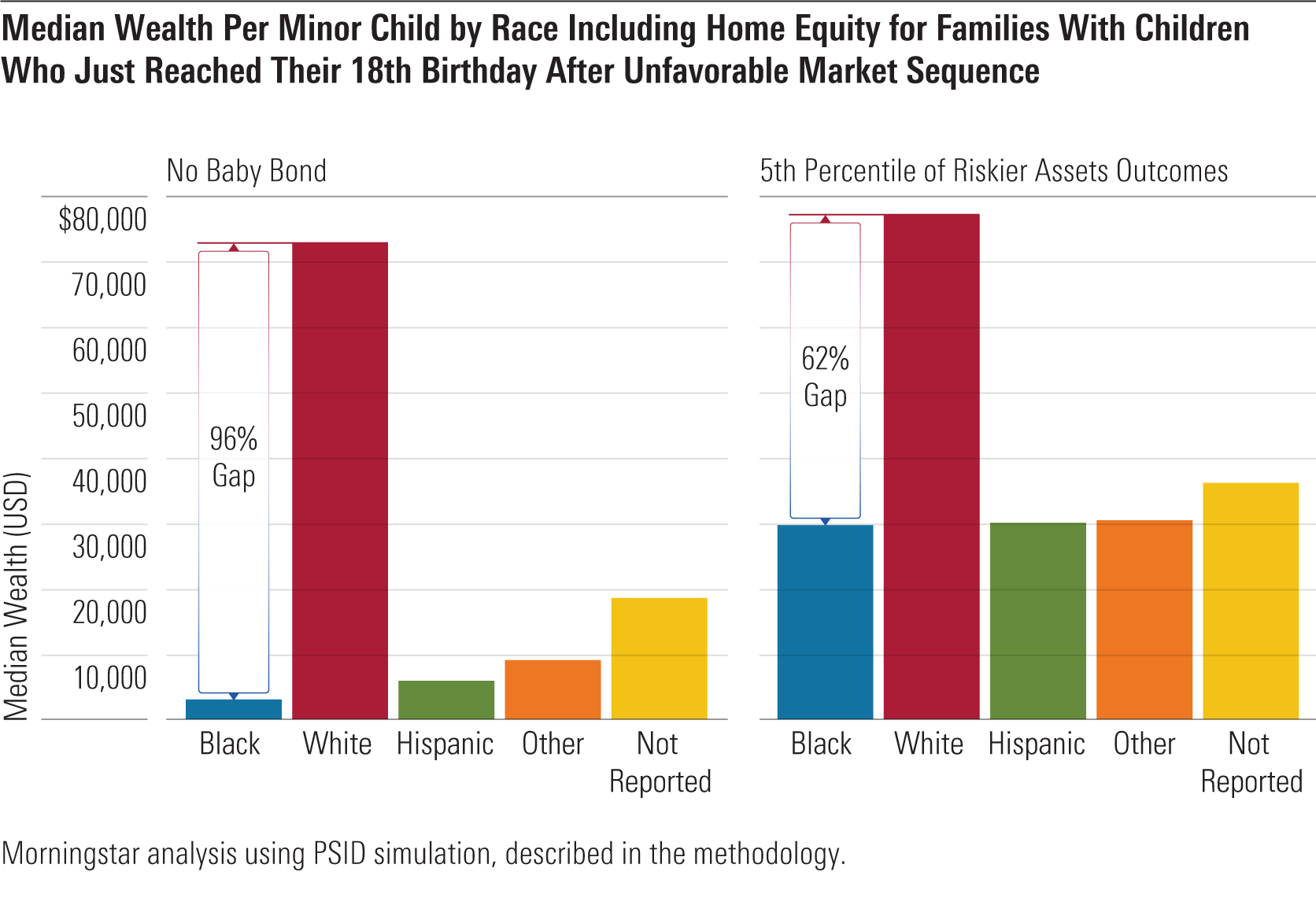 To understand the possible outcomes of investing the baby bond accounts in riskier assets, we simulated the investments following a glide path, moving from a high proportion of the portfolio in equity when the accountholder is born to entirely invested in debt as the accountholder approaches 18.

This is a similar approach as that used for the increasingly popular 529 college savings plans and, although over a different time span, for target-date funds. By simulating this investment strategy across various sequences of returns, we can approximate the outcome for each individual in our sample in good markets (75th percentile and higher), bad markets (25th percentile and lower), and average markets (centered around the 50th percentile).

Since this is considering the results following a particularly bad sequence of returns, one that would happen only about 5% of the time, the possibilities for closing the racial wealth gap are even greater when you consider the other 95% of the distribution.

While investing baby bonds in riskier assets increases the variability in the final account balances available to individuals when they turn 18, it creates the possibility of providing outsize benefits to children from the lowest-income families. In turn, this allows the gap in median wealth per minor child between Black families and white families to close much more quickly than if the assets were invested in low-risk securities.

The chart below shows the difference in the racial wealth gap before accounting for the effects of baby bonds, with baby bonds invested in assets with a 1% annual real return, and with baby bonds invested along a glide path during average to great markets--the 50th and 95th percentile of the distribution, respectively. We use the generous assumption of 1% annual real return as our baseline for what low-risk assets could guarantee and still see that over half the time the riskier portfolio would reduce the racial wealth gap further. Under close to ideal market conditions, the gap could be cleanly halved. 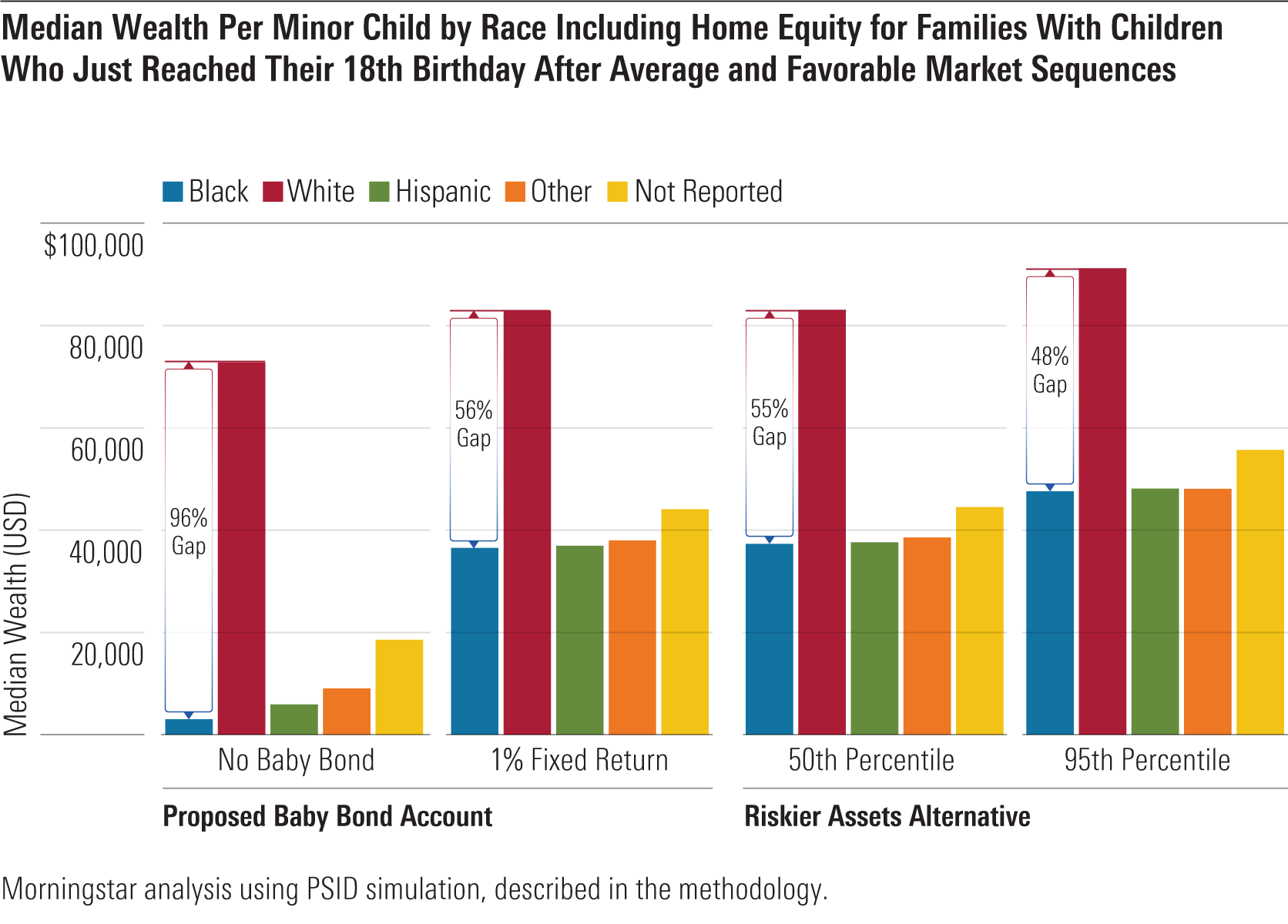 The potential benefits to investing baby bonds in a glide path that includes exposure to riskier assets is clear, however this strategy increases the variation in final account balances. The final value of the accounts is dependent upon the sequence of returns that the contributions generate over the 18-year accumulation period. Since it is unlikely for market conditions to be identical over different 18-year intervals, it is likely that individuals receiving the same contributions but born in different years will see different balances as they turn 18.

Even with the baby bonds invested in low-risk assets such as U.S Treasuries, the proposed investment in the American Opportunity Accounts Act, there would be variation in balances from year to year. However, it is important to recognize that investing the contributions in portfolios with riskier assets will increase the inconsistency in the amounts available to individuals turning 18 at different times, and it will vary most for those receiving the largest benefits.

Policymakers will need to decide if they want a baby bond program focused on equity among accountholders or if they are willing to allow recipients to bear more risk for the potential to reduce the racial wealth gap more quickly.

Nonetheless, either program design would help reduce the racial wealth gap for children under age 18. If policymakers believe the extra resources for many 18-year-olds could substantially change their ability to pursue higher education or purchase an asset such as a home more quickly than they otherwise would, then baby bonds are worth considering.