During an eventful November that included the closely contested U.S. elections, progress on coronavirus vaccines, and the Dow Jones Industrial Average closing above 30,000 for the first time, investors plowed $112 billion into long-term mutual funds and exchange-traded funds. That was the second-largest monthly tally behind January 2013's $117 billion and the most in the eight consecutive months of inflows since the markets' sharp sell-off in March 2020. On the other side, money market funds had their sixth consecutive month of outflows. 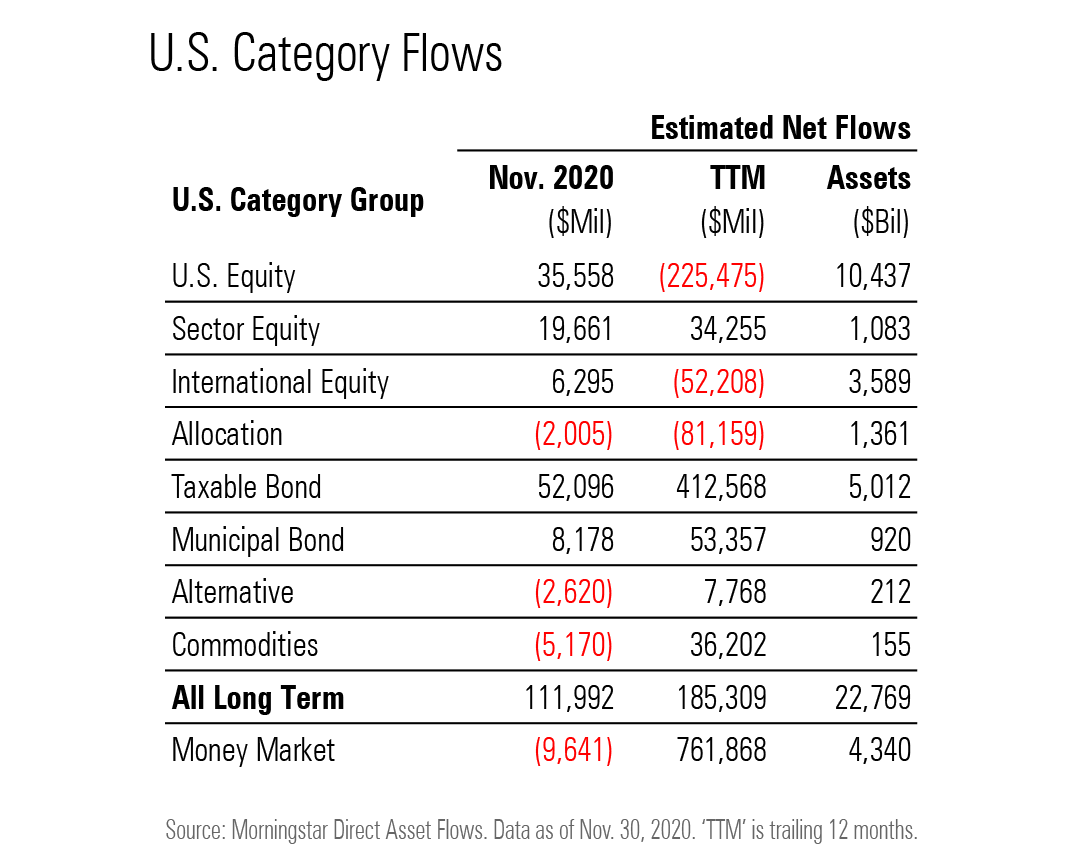 Digging deeper into November's long-term fund flows, the clear winner between the two investment types (open-end funds and ETFs) was ETFs. Their record $97 billion of inflows for the month easily topped the previous record of $62 billion. Investors primarily use ETFs for equity market exposure: About three fourths of all ETF assets are in U.S.-, international-, or sector equity funds. Investors added a total of $88 billion to those three equity category groups in November. 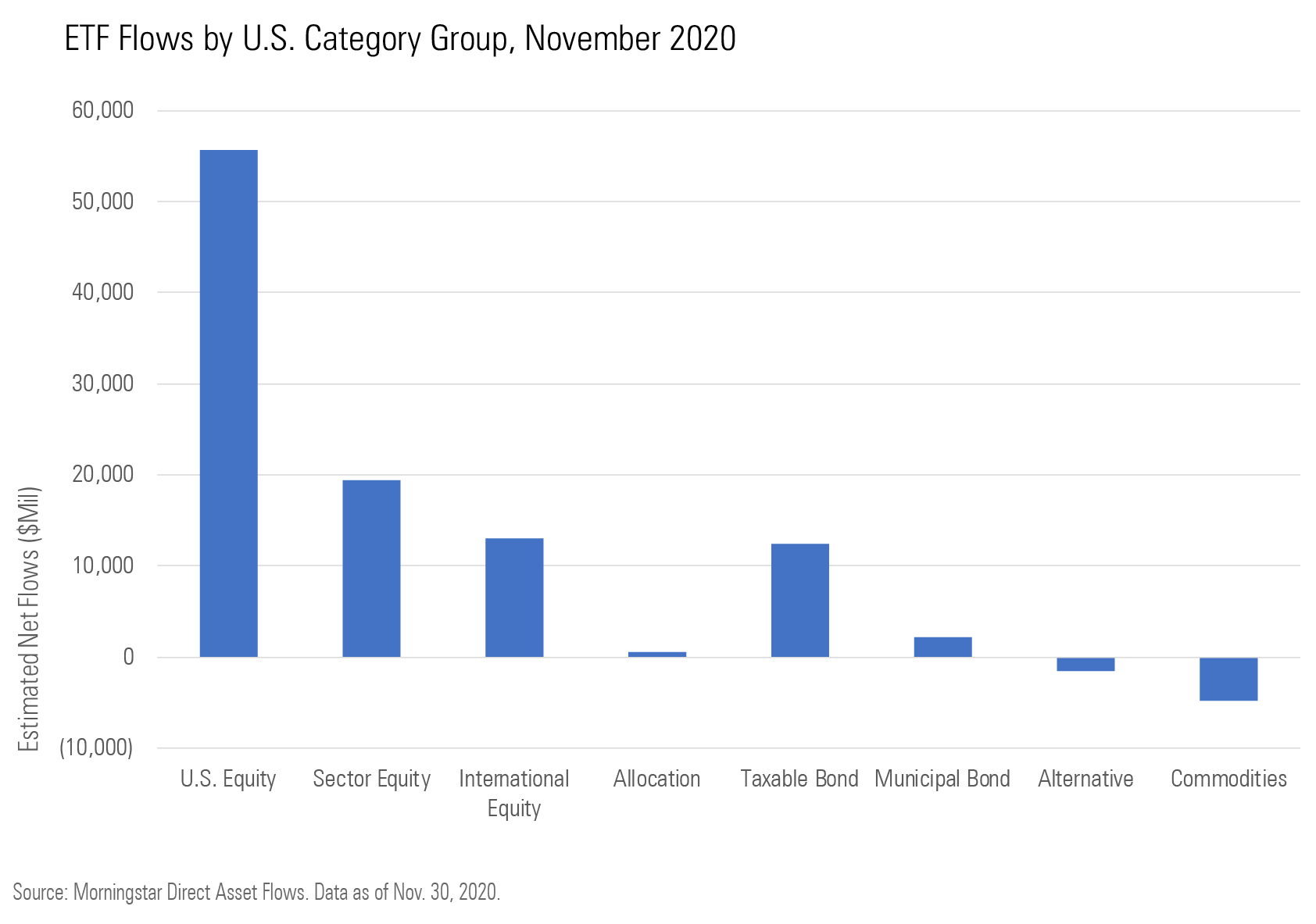 In 2020 so far, the ETF/open-end flows divergence has been starkest among U.S. equity funds. Domestic-equity ETFs attracted $118 billion for the year through November; by contrast, open-end funds suffered a whopping $345 billion of outflows over that period. That puts open-end U.S. equity funds on track for their worst outflows in a calendar year, easily surpassing 2019's record of $180 billion.

Overall, U.S. equity funds had only their second month of inflows in 2020, netting nearly $36 billion in November; but whereas U.S. equity ETFs took in a record $56 billion for the month, their open-end counterparts shed $20 billion. Much of the $36 billion haul went to broad-market funds such as Vanguard Total Stock Market Index (VITSX), which became the first U.S. fund to end a month with more than $1 trillion in total assets. These assets include those of Vanguard Total Stock Market ETF (VTI), which raked in $5 billion in November. 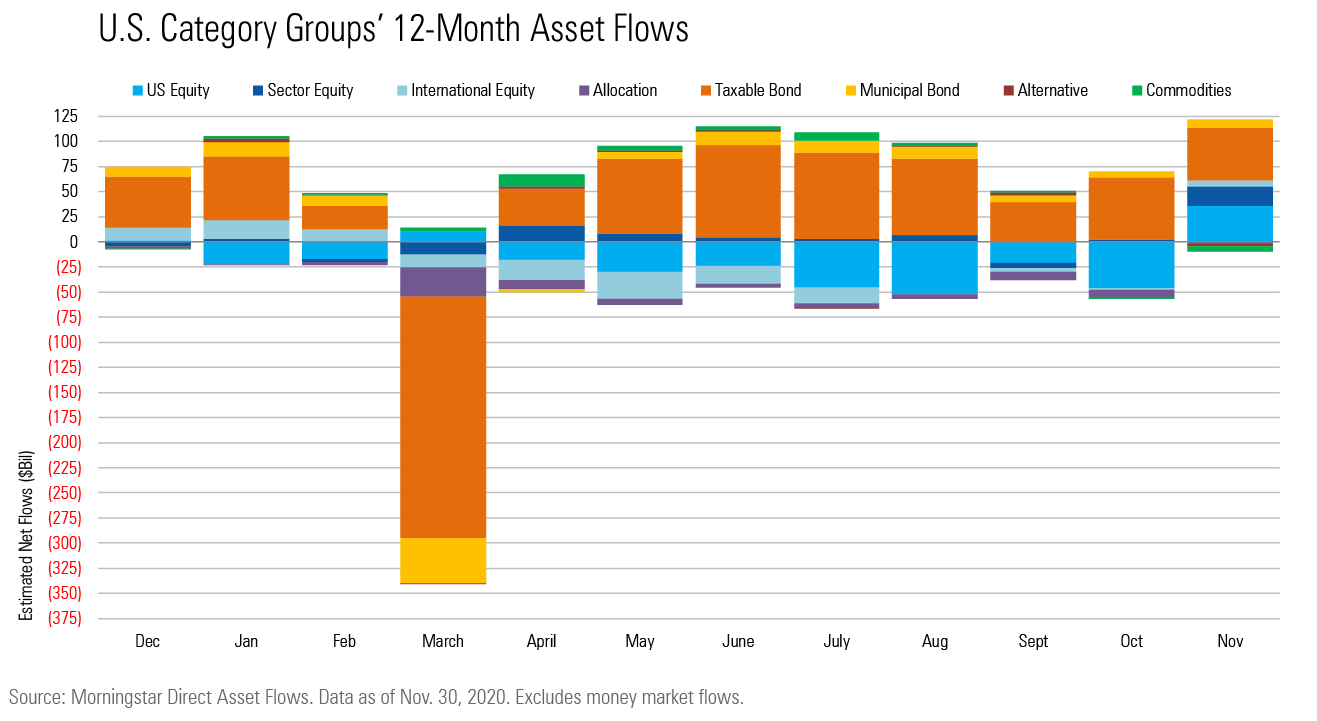 Sector equity funds, which held only 5% of all long-term fund assets in November, punched above their weight with a record $20 billion of inflows for the month. More than $19 billion of those flows went to ETFs. Technology funds, which have been hot both in terms of performance and flows, gathered $3.5 billion. But there were contrarian moves as well. Financials funds picked up $3.4 billion of inflows for their best month since November 2016 in the wake of the last U.S. presidential election. Investors also took interest in clean-energy funds, such as iShares Global Clean Energy ETF (ICLN), that might benefit from a Joe Biden administration.

International-equity funds returned to positive flows in November after an eight-month stretch in which investors withdrew a total of $101 billion from those funds. Again, ETF flows made the difference. International-equity ETFs' $13 billion of inflows more than offset nearly $7 billion of outflows from the group's open-end funds. Diversified emerging-markets funds took in $3.6 billion for the month, though they have had net outflows of $16 billion for the year to date.

Meanwhile, taxable-bond funds continued to get attention. They raked in another $52 billion in November, bringing their year-to-date inflows to a hefty $368 billion and nearing 2019's calendar-year record of $396 billion. Sixteen of the group's 20 Morningstar Categories had inflows for the month, with intermediate core bond funds leading the way at $15 billion. Beyond that, investors were split on their willingness to take on risk. They added $6.5 billion to high-yield bond funds, but they also invested $6.0 billion in short-term bond and intermediate-government funds, which are generally more insulated from interest-rate and credit risks, respectively. That said, investors pulled $5.7 billion from long government funds--the strongest category outflows in the taxable-bond group--amid historically low interest rates. 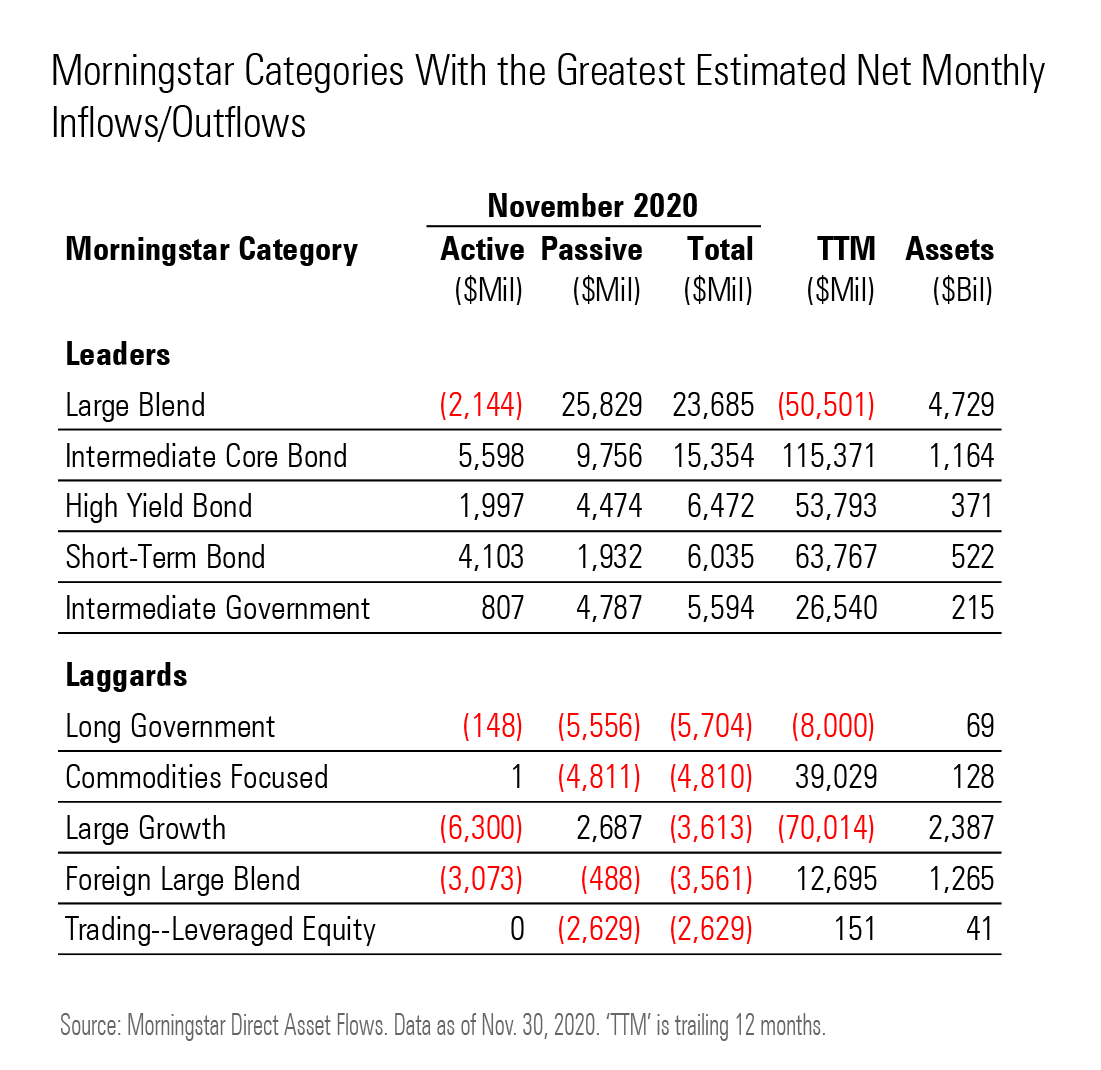 Among fund families, firms with mostly passively managed strategies gathered the most inflows in November, led by iShares' strong $31 billion. Dimensional Fund Advisors topped the outflows list at $1.9 billion, followed by a slew of active managers, including Dodge & Cox and T. Rowe Price. 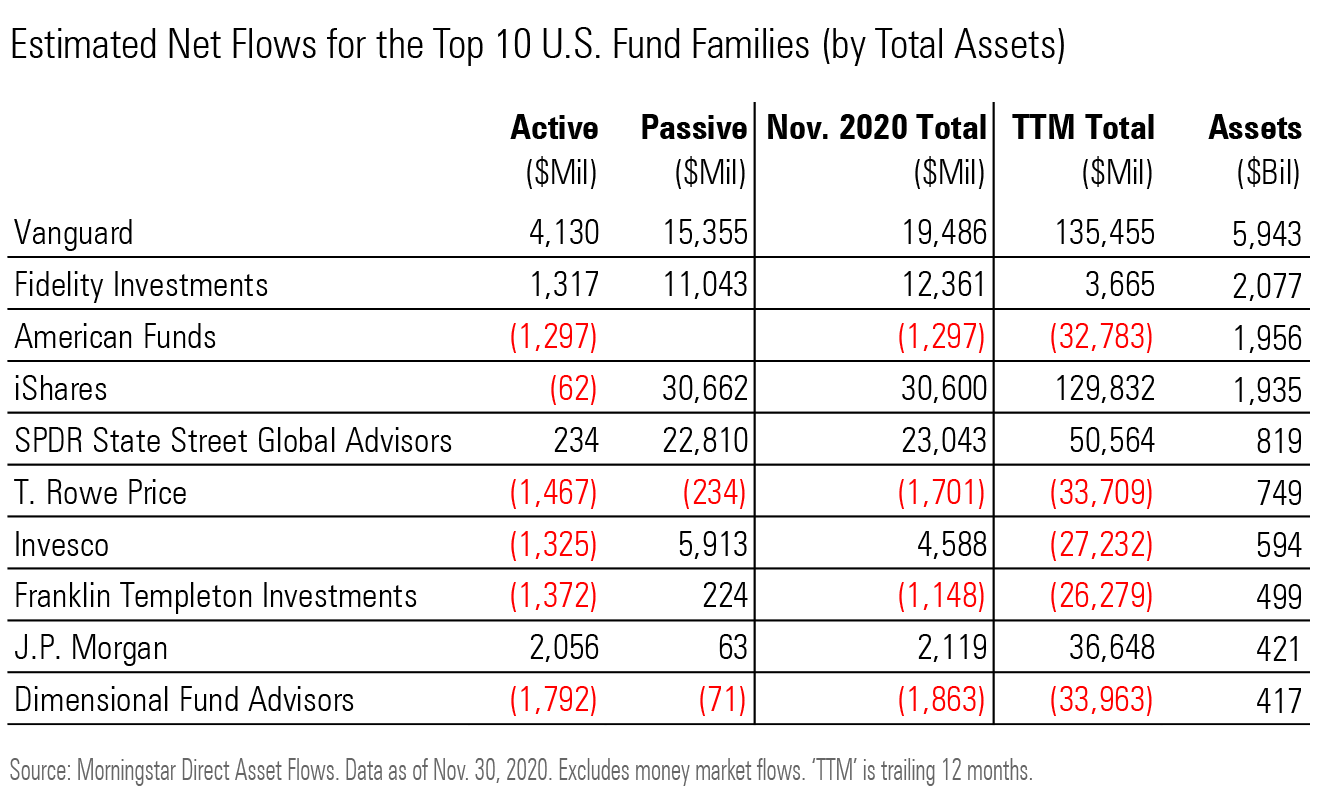 Fidelity had its best month ever with nearly $12.4 billion of inflows in November. Though long known as an active manager, Fidelity owes much of its recent growth to its passively managed offerings, which pulled in $11 billion during the month. For the year to date, in fact, Fidelity's active strategies shed $41.6 billion while its passive products picked up $36.8 billion.

Note: The figures in this report were compiled on Dec. 9, 2020, and reflect only the funds that had reported net assets by that date. Artisan had not reported. Morningstar Direct clients can download the full report here.