Editor's note: Read our latest coverage on the race, after the vote, here.

All eyes are on Georgia as a very fragile governing majority is at stake in the upcoming Jan. 5 Senate runoff election. Democrats still have a chance of a Senate majority should they win both seats, which we peg as about a 20% probability. Should Democrats win, the Senate makeup would be 50 Democratic Senators and 50 Republican Senators, with Vice President Kamala Harris as a tiebreaker.

We’ll review changes in tax, energy, and health policy that could affect company valuations if Democrats win these races, as well as the prospects for new stimulus under a Democratic Senate.

The Slimmest of Democratic Majorities Is Possible but Not Likely Despite the majority of voters in Georgia choosing President Biden in the November election, we think most signs point to a Republican sweep in the Senate races. Here’s why:

The reason for our uncertainty is that special elections typically draw a smaller pool of voters, and it can be hard to predict who will show up at the polls. A counterpoint to the Scott Brown Massachusetts example is Doug Jones’ surprising election in Alabama in 2018.

Additionally, President Trump’s insistence that he won the 2020 general election denies the Republican Senate candidates potentially useful arguments: They would check President Biden’s power, and divided government is best for Georgia. Given the thin margin between Democratic candidates (in total for the nonpartisan blanket election) and Republicans running for the seats, we think there is some possibility Democrats could mobilize enough support even in the face of the headwinds mentioned above.

Even if Democrats Win the Georgia Senate Runoffs, There Are Limits to What They Can Do At the top of any Democratic agenda will be new sources of revenue because their other policy priorities require new infusions of money.  Democrats have generally followed “pay-go” rules, meaning they will attempt to pay for new policy initiatives with new funds or spending cuts over a 10-year window. While these provisions may rely on gimmicks like deferred revenue-raisers to some extent, there are enough centrist Democrats that the caucus will insist on increasing revenue to pay for new programs.

Next on the priority list will be additional stimulus; this depends on what the “lame duck” Congress (which convenes after the election and before new members are sworn in early in January) accomplishes. Unlike other policy efforts, Congress will likely suspend “pay-go” rules for this emergency response to the pandemic and the resulting economic suffering. Democrats will look particularly hard at stabilizing the finances for state and local governments.

The table shows the probabilities we assign to various initiatives given a possible Democratic Senate. These probabilities have some interdependency on each other. Congress can only do so much in the 2021-22 legislative session. To the extent that Congress needs to do more to respond to the pandemic, there will be less room for other priorities.

Our baseline view is that Democrats will reverse some of the cuts in the Tax Cuts and Jobs Act and then use the money to expand Medicaid and add some incentives for consumers to reduce their greenhouse-gas emissions through buying electric vehicles, solar panels, and other substantial purchases. We believe any further stimulus would not be paid for with taxes. 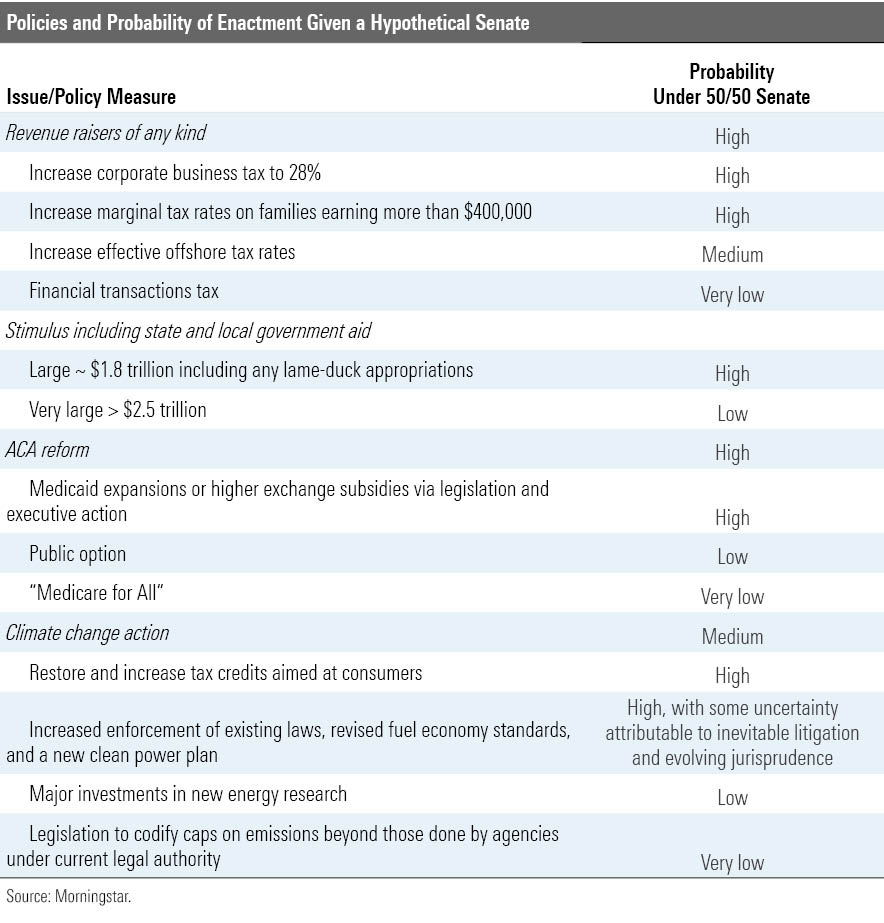 Implicit in our assumptions is that Senators will typically vote along party lines with few defections, leading to at least as much party cohesion as we saw from Democrats during the first legislative session during the Obama administration and from Republicans in the 2017-18 legislative session under the Trump presidency.

We assume Democrats will need to act unilaterally to accomplish most of their priorities, and, given the low levels of ticket-splitting among voters, as well as the fact that most members of Congress run on national rather than local issues these days, there is a reasonable chance they will have enough party cohesion to do so on modest healthcare reforms, increasing corporate taxes, and fiscal stimulus. All of these changes can be accomplished through the budget reconciliation process, which does not require 60 votes to overcome a filibuster. Climate change and energy policy will be much more difficult for a narrow Democratic majority to address.

A handful of Democratic policy priorities can be accomplished solely through executive action, and we expect a potential Biden administration to pursue these regulatory avenues regardless of the outcome of the Georgia Senate election.

Tax Hikes Are Likely, but Not for Everyone Outside of increasing marginal tax rates on high earners, the most obvious place to raise revenue is from reversing the corporate business tax cuts that were reduced to 21% from 35% as the centerpiece of the 2017 Tax Cuts and Jobs Act. We think an increase to around 28% is very likely, particularly since candidate Biden has repeatedly said he will not increase taxes on those earning less than $400,000 annually, leaving few opportunities to raise revenue.

Democrats may also seek to increase taxes on the offshore earnings of U.S. corporations. However, it will be more difficult for Democrats to keep their caucus together to do so because arcane tax issues are hard to explain to the public and there are fierce lobbying interests across many industries seeking to keep these taxes low. But, to the extent that Democrats need this revenue for appropriations for healthcare spending, we think there is at least a reasonable chance of Democrats raising this money through increasing the rates on global intangible low-taxed income.

Our back-of-the-envelope math suggested that an increase in the corporate tax rate to 28% from 21% would reduce U.S. corporate aftertax earnings by an average 6%. If we also saw increased taxes on offshore earnings, that could reduce aftertax earnings by perhaps a total 9%. Very likely, the market’s reduced expectation of corporate tax hikes following the November 2020 election contributed to the rally in U.S. equities.

We think any additional revenue Congress raises through tax increases--including from any surcharges for families with more than $400,000 in annual income--will be offset with new spending as outlined or with tax expenditures such as an increase in the child tax credit.

New Stimulus May Not Be Crucial for Economic Recovery, But a Vaccine Is In terms of stimulus, Democratic leadership will try to get a large stimulus to cope with the effects of the pandemic. Even if the lame-duck Congress passes something, it seems likely that Democrats will still want to engage in aggressive fiscal stimulus. Conventional wisdom in Democratic circles is that the 2009 stimulus was too small, and, as the party associated with it, they owned the outcome of that too-small stimulus. We expect Congress to approve $500 billion to $900 billion during the lame-duck sessions this calendar year and Democrats to appropriate additional stimulus funds if they win the elections in Georgia, with much of the further stimulus directed at helping state and local governments. If Democrats win, we expect around $1.8 trillion total in new stimulus appropriations between the lame-duck and new Congress.

While the market has traded up and down off of stimulus news, we don’t think stimulus is crucial to the U.S. economy. The development of a successful vaccine has been far more important. Widespread deployment of a vaccine in the first half of 2021 should enable the economy to largely return to normal.

Consequently, much of the slack in the economy should be gone in the next few years. Once that’s the case, additional stimulus has little effect on real gross domestic product. As such, while a massive stimulus bill could help pull forward the recovery, it won’t affect the long-term trajectory of GDP and therefore isn’t a major driver of company valuations, in our view.

Healthcare May Not Change Much Under New Leadership While Democrats have largely run on healthcare since the 2018 election cycle, they will likely make only marginal changes to the Affordable Care Act at least in terms of the effect on equity valuations, unless the Supreme Court were to invalidate the law and require a legislative fix. The Supreme Court is very unlikely to do so given the case it heard on Nov. 10 and the questions key justices asked.

Even with a narrow majority, Democrats are extremely unlikely to legislate a high-impact public option that would substantially affect our valuations. Democrats have primarily run on defending some of the protections in the Affordable Care Act, and, while some Democrats want a “Medicare for All” universal single-payer system, their nominee and now president-elect has been clear since the primaries that he does not support these efforts. Also, such a major expansion of publicly provided healthcare would cost a lot of money--more than can be raised with the tax changes we think are viable with the narrowest of majorities.

We think it will also be hard for Democrats to even add a public option for the individual marketplace. And if they did so, that marketplace covers only a fraction of the people covered by the workplace market.

We believe Democrats are much more likely to expand Medicaid coverage to include people further from the poverty line or increase the subsidy in the individual marketplaces to reduce the costs for lower-income households. Such an expansion could cost between $85 billion to $105 billion annually. Either approach would rely on the existing private insurance system, and we don’t believe it would dramatically affect valuations for most firms we cover.

It’s important to keep in mind that even if the Supreme Court strikes down the ACA, it will be on very narrow, technical questions. Specifically, the court is considering the constitutionality of a now-meaningless mandate that is no longer associated with a tax and the severability of this provision from the broader law. In the unlikely event that the court strikes down the law, Congress can fix it without changing it significantly, and we believe it will restore the full act, regardless of party control. While there may be some political wrangling around questions of religious exemptions, there will be overwhelming pressure to restore the law.

Climate Change Action Won’t Likely Be Transformative Addressing climate policy via a large spending bill will be more politically feasible than hard caps on emissions or other harsh regulations, we believe. But we also think the probability of major new investments in clean energy are quite low.

Given the geographic and economic makeup of the Senate, a Democratic caucus will have senators from coal-producing states and states that skew more to the political right than the country as a whole. Unless there is bipartisan momentum on climate policy--which we think is unlikely--Democrats would have needed a much larger majority to maintain enough votes for the kinds of greenhouse-gas regulation that Biden has floated on his campaign’s website. While there will be support for minor investments in clean energy, a major package is unlikely to garner support from Democrats hailing from Montana and West Virginia, and, without a bipartisan consensus, Democratic leaders will need those votes to advance a package.

In terms of executive action, a Biden administration does have some scope to enact major policy changes without a Democratic Senate. A Biden administration will likely seek to increase fuel economy standards for passenger vehicles, as well as increase renewable energy’s share of U.S. electricity generation, among other measures.

In aggregate, these policy changes don’t move the needle for our oil or natural gas price forecasts. But Biden’s plan to curb drilling on federal lands would have a modest impact on U.S. oil and gas producers with significant exposure to federal lands.

With that said, Supreme Court rulings around the power of the administrative state to regulate based on legislative directives could limit what Biden can do with the executive branch alone. Such rulings could spur congressional action on issues such as regulating greenhouse-gas emissions at later dates, as they will likely center on the current authority the executive branch has under existing laws rather than the authority Congress could grant the executive branch.