As the United States churned toward its November election, long-term mutual fund and exchange-traded flows in October followed the familiar themes of 2020. Assets poured into taxable-bond funds but came out of U.S. equity funds. All told, long-term funds collected $13 billion in October--roughly the same amount as in September and their seventh consecutive month of inflows. In contrast, money market funds had outflows of nearly $50 billion during October--their fifth consecutive month in the red. 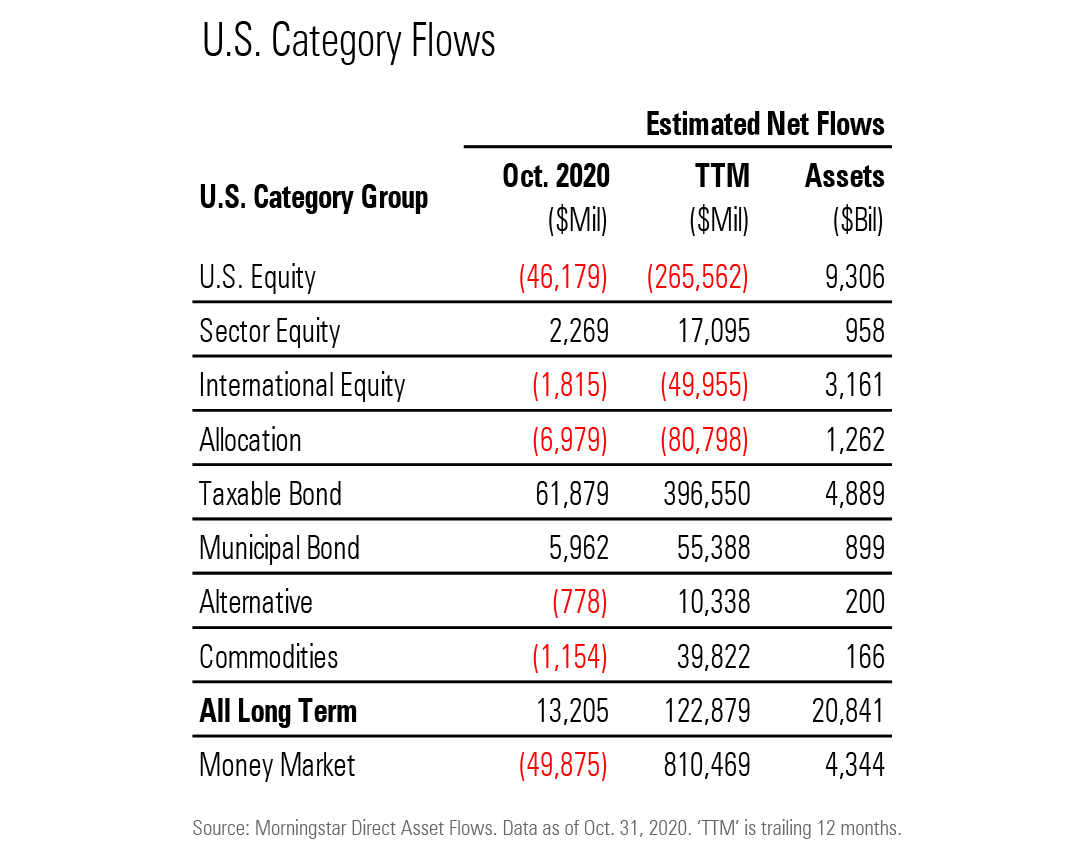 Taxable-bond funds continue to shine in 2020. Their nearly $62 billion of inflows in October led all category groups. For the year to date, those funds have accumulated $316 billion--and that includes the record $240 billion of net redemptions in March. Taxable-bond funds are now within striking distance of 2019's calendar-year record haul of $395 billion. While many investors flocked to moderate-risk Morningstar Categories such as intermediate-core bond (to the tune of $16 billion in October--more than any other category), others put money into short-term and ultrashort bond funds, suggesting a conservative stance in the face of economic and political uncertainty as well as rock-bottom interest rates. 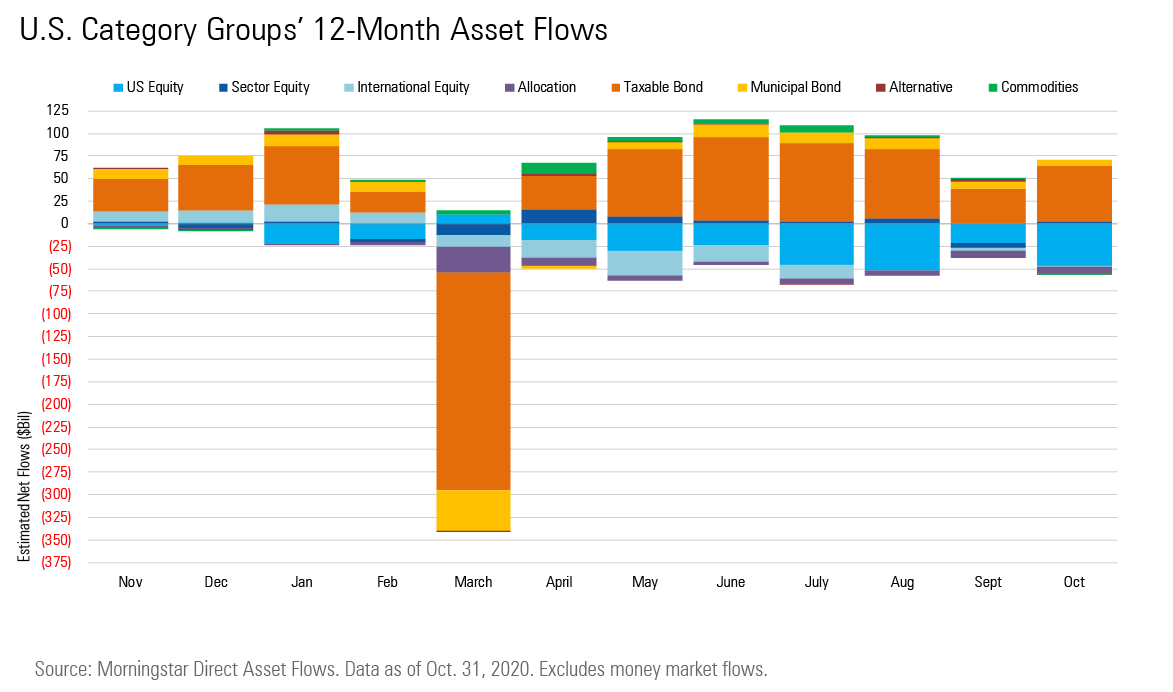 The flows picture looked bleak for U.S. equity funds, however. They had $46 billion of outflows--the second-most ever behind the $52 billion record set in August 2020 and the seventh consecutive month of outflows. Investors pulled a record $19 billion from the hot large-growth category--the best-performing equity Morningstar Style Box category in 2020 and in the trailing 15 years through October. Another $13 billion came out of large-blend funds. In fact, all nine Morningstar Style Box categories had outflows in October. 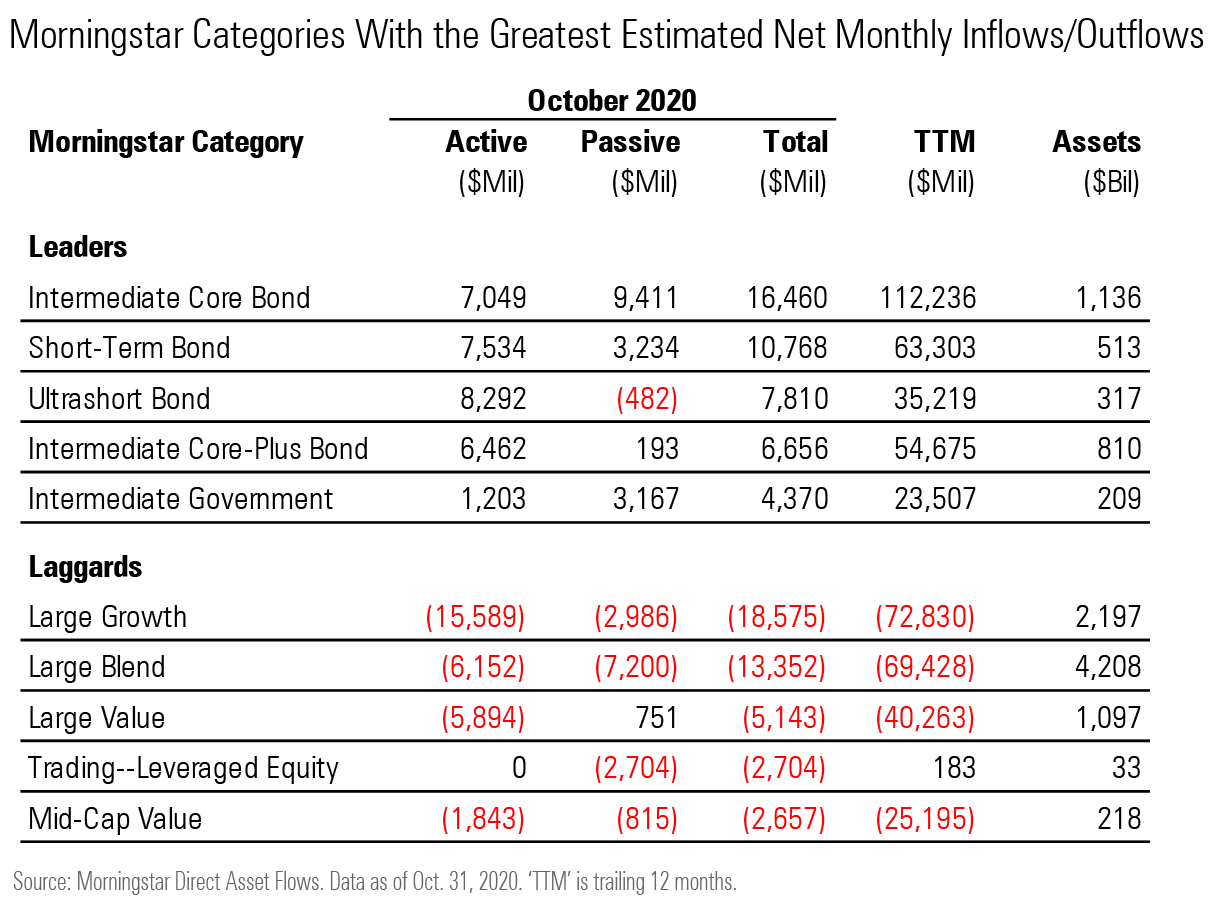 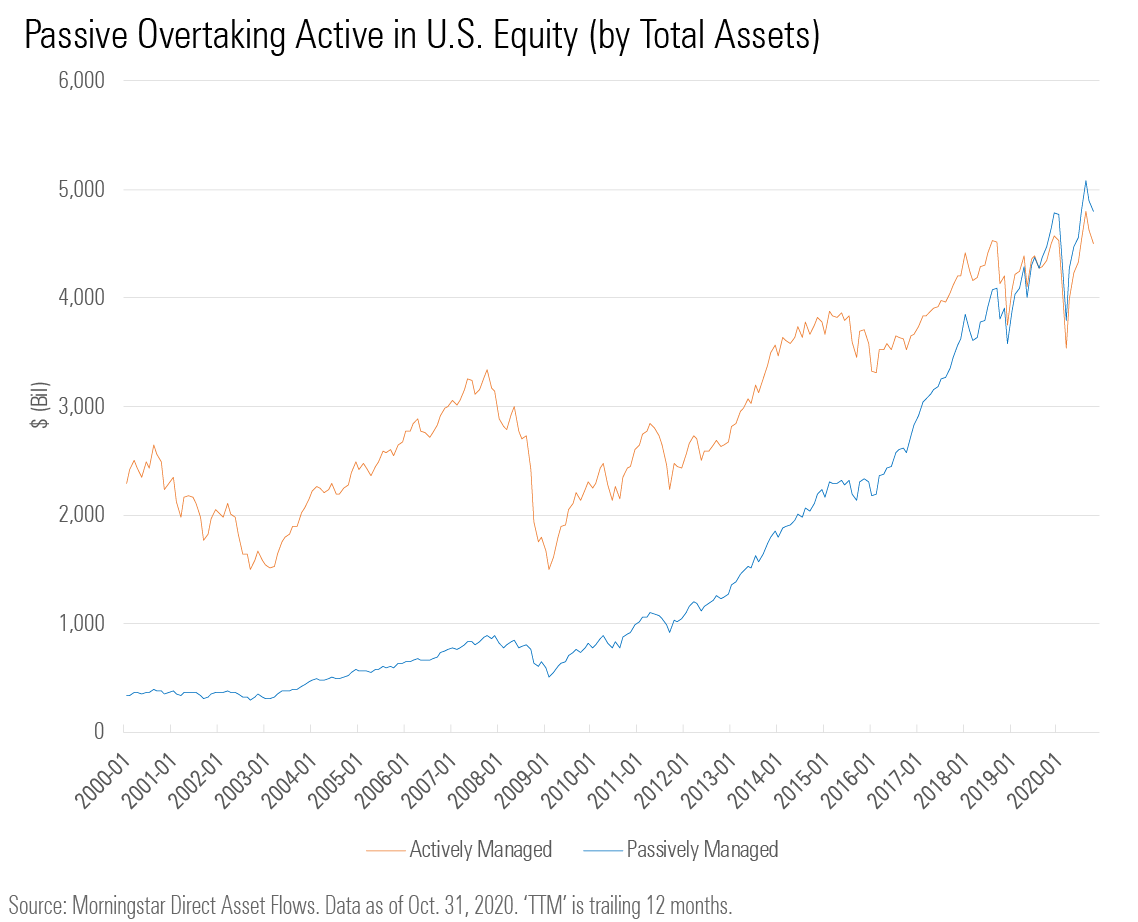 Vanguard topped the list of fund families receiving inflows in October. Its funds gathered $12.8 billion in long-term assets for the month. Almost 79% of that went to the firm's passively managed strategies. For the year to date, Vanguard has raked in nearly $96 billion of new assets--the most among fund families. As in September, Vanguard reported a $20 billion fund-to-collective-investment-trust conversion that affected the $372 billion Vanguard Total International Stock Index (VTIAX). When possible, Morningstar adjusts its flows data to account for such conversions (as it did in this case) because these apparent fund outflows do not necessarily reflect a change in investor sentiment toward the strategy.

The iShares fund family had the second-strongest inflows, pulling in $9.5 billion. The firm's taxable-bond funds drove much of the increase. They collected $7 billion in October. For the year to date, the iShares taxable-bond suite garnered nearly $63 billion, more than 78% of the firm's inflows during the 10-month period. Yet the firm's top flow-getter in October was an environmental, social, and governance-themed equity fund, iShares ESG Aware MSCI USA ETF (ESGU), which collected nearly $2 billion and whose total assets have grown nearly sevenfold in the past 12 months. 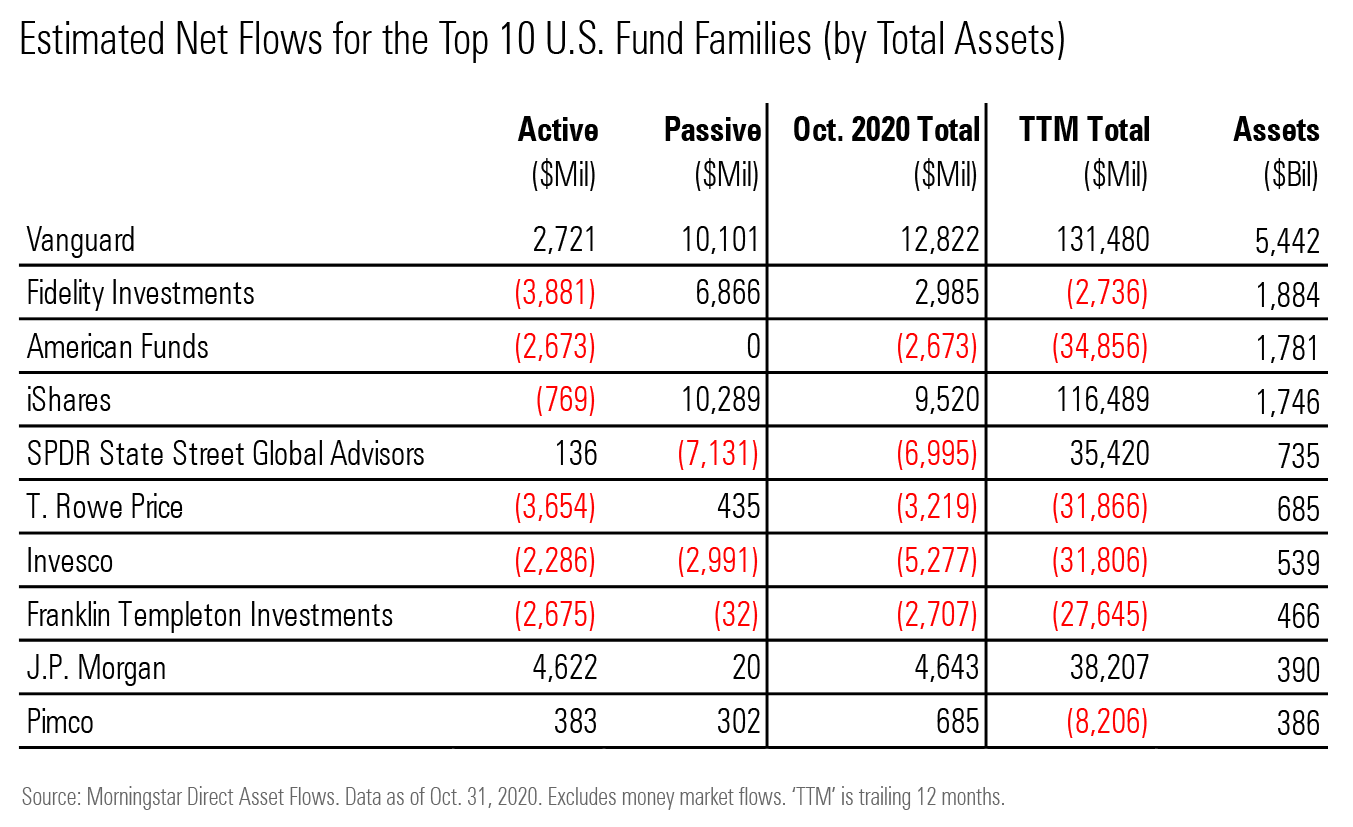 SPDR State Street Global Advisors suffered the largest outflows of any fund family in October at $7 billion. The firm's widely held SPDR S&P 500 ETF Trust (SPY) was likely the victim of rebalancing during the month. The S&P 500 reached an all-time high on Sept. 2 (marking a 61% rally off its March 23 low) and flirted again with those highs in mid-October. With that in mind, investors moved more than $8 billion out of the index-tracking ETF in October.

Invesco's $5.3 billion of October outflows occurred in the same month that activist investor Nelson Peltz's firm, Trian Fund Management, announced it had built stakes in Invesco and Janus Henderson (which had $665 million of outflows during the month). Trian's SEC filings indicate it wants to pursue "strategic combinations" for both firms. Invesco's business is languishing on many fronts. Its U.S. equity funds, which hold more than half the firm's $539 billion of total assets, suffered $4 billion of outflows in October. Its taxable-bond offerings, though they added a modest $187 million for the month, have shed $2.4 billion so far in 2020--a year in which many taxable-bond funds have had strong inflows.

Note: The figures in this report were compiled on Nov. 11, 2020, and reflect only the funds that had reported net assets by that date. Artisan had not reported. Morningstar Direct clients can download the full report here.