In a tumultuous year, Jeff and Debra Benjamin have found their happy place.

Having spent most of their adult lives in the northern part of the United States, Jeff a 59-year-old senior columnist with InvestmentNews, and Debra, a 61-year-old caterer and baker, recently relocated to North Carolina. The draw? Their 27-year-old son, his wife, and their two-year-old son, who were already living there.

“We moved down here 100% to be with them,” Jeff said. But he notes getting out of the Midwestern winters doesn’t hurt, and he’s also relishing the opportunity to play more golf, one of his passions. “I’ll be playing golf until I can’t move anymore,” he joked. Jeff and Debra agreed to be featured as part of Morningstar’s 2020 Portfolio Makeover Week, and Jeff will also be writing about the experience for InvestmentNews.

Jeff’s main priority for the makeover is to see whether his and Debra’s $1.15 million portfolio is on track to support a retirement beginning when he’s age 67. “Like a lot of people who spent their careers in journalism,” Jeff said, “I didn’t make a lot of money. I seriously ramped up my savings in the past 10 to 15 years.” Jeff notes that his innate frugality has helped, as has market appreciation, an equity-heavy portfolio, and a hands-off approach. “I don’t look at it very much,” he says, noting that he didn’t make any changes during the last financial crisis and that his patience paid off. “The past decade has been powerful for the power of compounding,” he noted.

But Jeff also acknowledges that he’s now 10 years closer to retirement, he’d like another check on their asset allocation. And like many investors, he’s feeling jittery about all of the uncertainty in the world. “I’m getting nervous about COVID. I feel like I may just want to sit out for awhile,” he said.

In addition to checking up on their portfolio’s sustainability and asset allocation in advance of their retirement in a little less than a decade, he and Debra want to make sure they’re never a burden on their son. “If I have a main financial worry, it’s that,” he said. Jeff has a term life insurance policy and Debra has a very small whole life policy, but they do not have long-term care insurance. 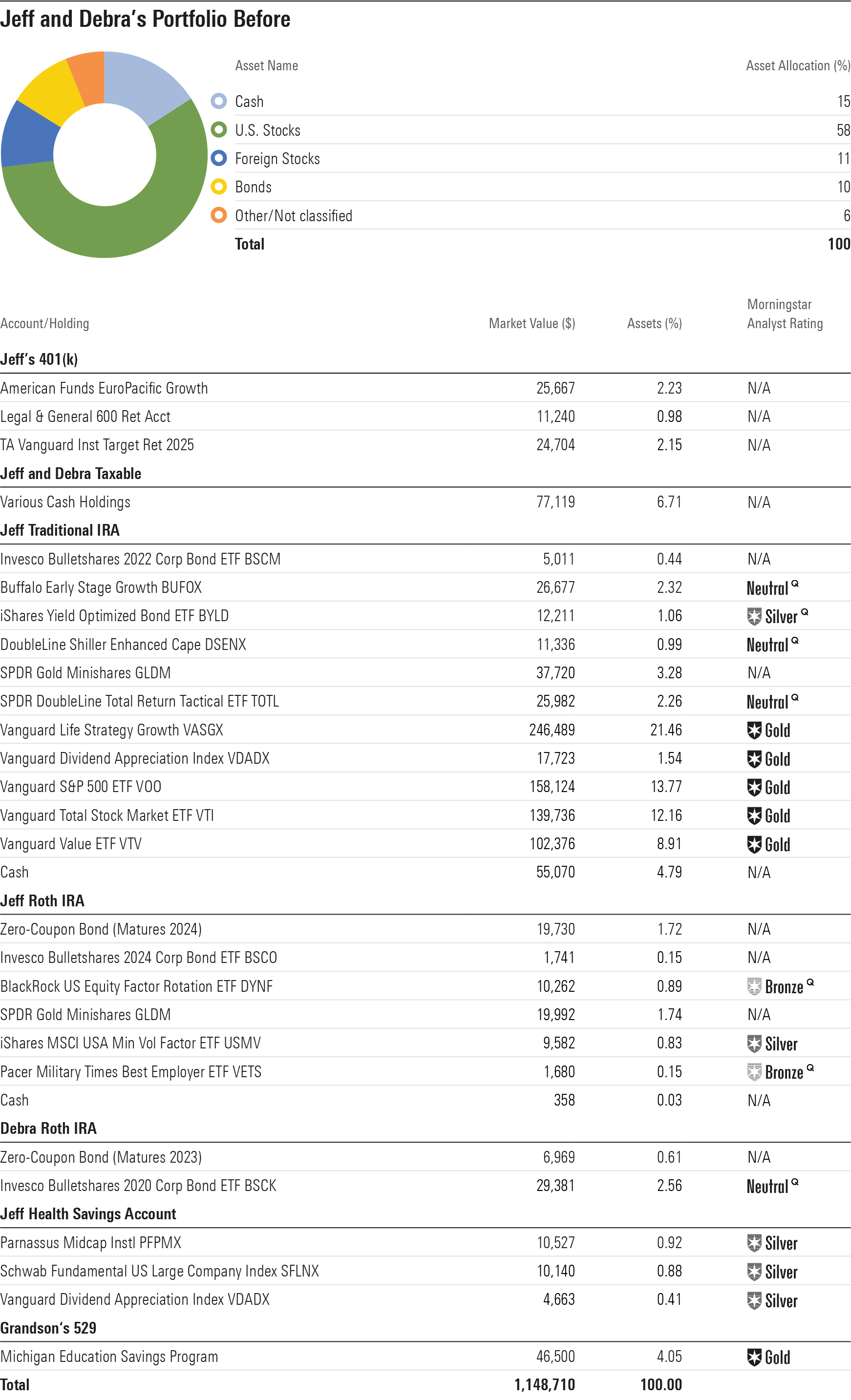 Like most couples, Jeff and Debra hold their portfolio in multiple silos: traditional and Roth IRAs, Jeff’s 401(k), and their joint taxable holdings. Jeff also has a health savings account that he’s contributing roughly $700 per month to. Finally, the couple hold nearly $50,000 in a Michigan 529 account for their grandson. They originally set up the account for their son, but he went into the Marine Corps and has received tuition assistance under the GI bill. Jeff and Debra are pleased that those funds can go to their grandson instead and can remain invested with his long time horizon in mind.

Their total asset allocation for their retirement portfolio--excluding the 529 assets--is 70% stock and 30% bonds, cash, and other. In terms of their actual investments, Jeff and Debra’s portfolio includes some plain-vanilla holdings as well as smaller positions in more specialized investments that Jeff has taken a flyer on. “I take smaller positions in funds that I’m interested in to see how they perform. I keep the positions small so they won’t do serious harm if they don’t perform well. When I asked Jeff if it was important to him to retain some of that idiosyncratic character in his “After” portfolio, he laughed. “Character is a nice way of putting it. It’s kind of a mess.”

The couple’s primary investment account, consisting about 70% of their assets, is Jeff’s traditional IRA, composed of assets that he rolled over when his company was acquired by another firm. His largest positions are in Vanguard LifeStrategy Growth (VASGX), which is a static-allocation fund with about 80% in equities. Jeff also holds sizable positions in several equity exchange-traded funds and index funds: Vanguard S&P 500 ETF (VOO), Vanguard Total Stock Market ETF (VTI), Vanguard Value ETF (VTV), and Vanguard Dividend Appreciation (VDADX). His IRA also includes a smattering of more specialized funds, including a yield-focused ETF (iShares Yield Optimized Bond ETF (BYLD) ) as well as DoubleLine Shiller Enhanced CAPE (DSENX), which focuses on the cheapest parts of the equity market. Jeff’s traditional IRA also includes a sizable cash allocation; the couple recently sold a rental property that he owned within the account.

Jeff’s Roth IRA also includes some niche holdings, including zero-coupon bonds, a few factor ETFs, and a gold ETF. His traditional IRA also includes the same ETF, bringing total gold exposure up to about 5% of the total portfolio. Debra’s Roth IRA consists of a zero-coupon bond and a fixed-maturity bond ETF that matures this year. Jeff’s 401(k) consists of institutional (non-mutual fund) accounts that are managed for his 401(k): a target date fund, as well as a near-clone of American Funds EuroPacific Growth (AEPGX) and an S&P 600 Index fund. Not to be confused with the mega-cap-focused S&P 500, the S&P 600 is an index of small-cap stocks.

The couple’s taxable portfolio includes some of the proceeds of their recent home sale; as such, it’s parked entirely in cash currently. 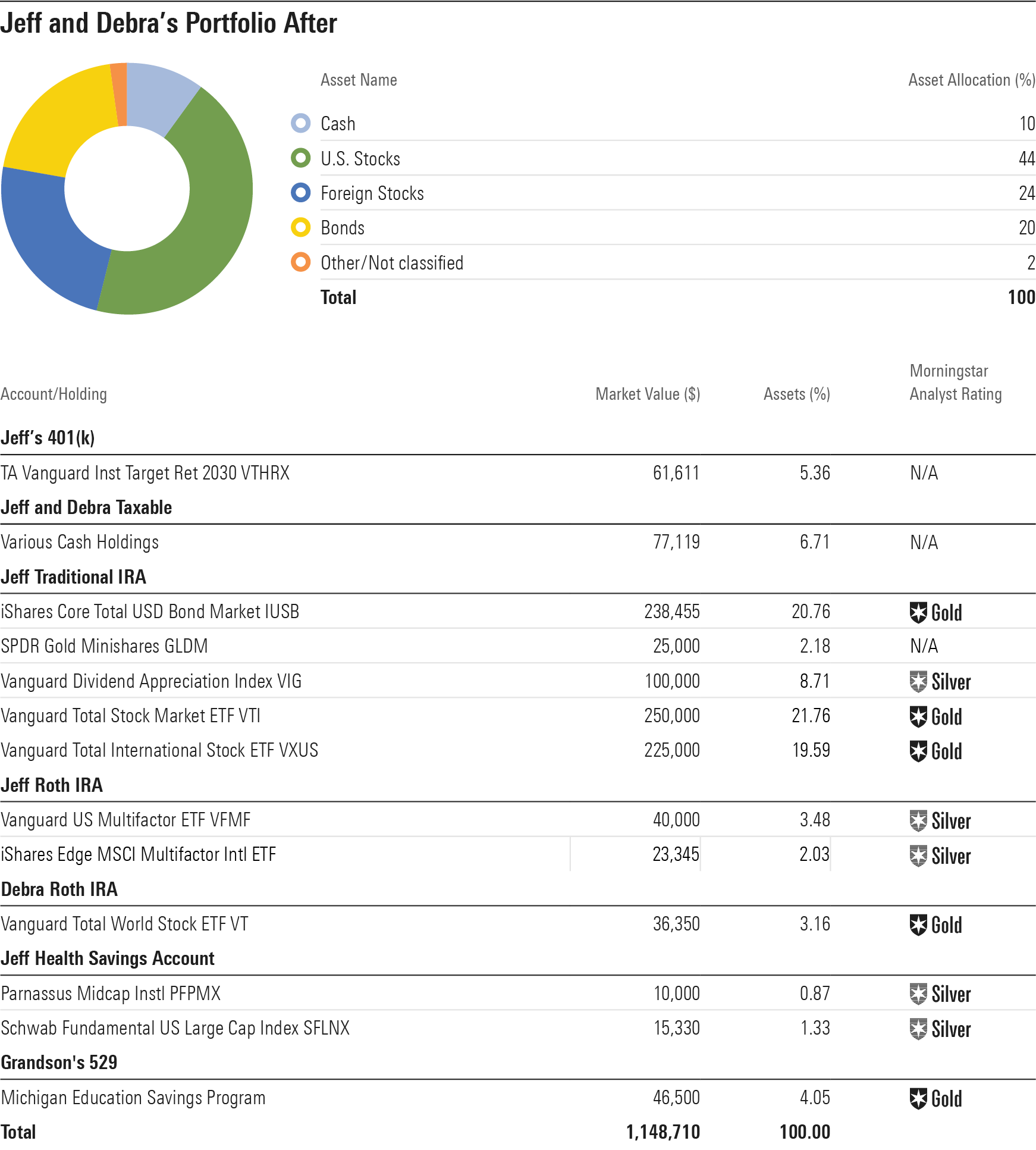 The first question I seek to answer with any portfolio makeover is whether the overall plan is on track. For Jeff and Debra’s retirement funding, the answer is yes. Not only has their portfolio grown to a comfortable level, but Jeff plans to contribute at a healthy rate until retirement. He makes the maximum allowable contributions to his 401(k) and HSA--$26,000 and $8,100, respectively, for 2020. Jeff steers an additional $200 per month into his Roth IRA. With those contributions sustained over the next eight years, Jeff and Debra’s portfolio would grow to at least $1.5 million, even without any help from the market. (Of course, it could also perform worse; I cover that below.)

That's a good number, but to gauge retirement portfolio viability, it’s important to stress-test a balance by considering withdrawal rates. Even at a fairly conservative 3% initial withdrawal rate, a $1.5 million portfolio would supply $45,000 per year in retirement. Jeff thinks that amount, combined with Social Security income of roughly $48,000 per year, will be more than enough to live on, given their modest living expenses.

Of course, if the market goes down in the years leading up to retirement, Jeff and Debra’s portfolio would feel the effects. But Jeff takes comfort in knowing they could also make do on much less if need be. “One of the main reasons I never panic when the market goes down is that I know my lifestyle. I know how frugal I am,” he said.

Jeff and Debra’s 70% equity exposure is aggressive considering their proximity to retirement, but it doesn’t strike me as extreme given their high risk tolerance. Given that equity valuations aren’t low today, however, I think they can take a few steps to improve their portfolio’s risk/reward profile over the next decade. For starters, their portfolio is notably low on foreign stocks, with just 11% of total assets and 16% of equity assets. For context, most target-date funds dedicate at least 25%-30% of their equity exposure to foreign stocks. That light foreign-stock weighting has been a help over the past decade, as U.S. stocks have handily beaten non-U.S. names, but could become a disadvantage at some point in the future. My After portfolio ramps up exposure to non-U.S. names in Jeff’s IRAs and in Debra’s Roth IRA to about a third of equity exposure, or 25% of total assets.

On the fixed-income side, my goal was to simplify while also ensuring that their portfolio has decent downside protection from its bond component. Rather than owning funds that offer more specialized fixed-income exposure, the After portfolio includes a position in a core-plus intermediate-term ETF, iShares Core Total USD Bond Market ETF (IUSB), in Jeff’s traditional IRA. It holds a dash of exposure to lower-quality bonds but generally maintains a higher credit profile than other intermediate-term core-plus funds. It should provide a decent amount of ballast to offset periodic downturns in the portfolio’s equity exposure.

I’m not as sanguine about gold as Jeff is; while it has often performed well in equity-market shocks, its record as an inflation hedge--an oft-touted rationale to own gold--is mixed. Thus, I took down the position a bit. Gold has had a terrific runup thus far this year, so the timing is good.

I used low-cost index funds for the equity portion of Jeff’s traditional IRA. As is the case with my model “bucket” portfolios, I retained the stake in Vanguard Dividend Appreciation to provide ongoing exposure to high-quality equities.

I targeted an equity-heavy portfolio mix in Jeff and Debra’s Roth IRAs. That’s because Roths are typically last in the retirement distribution queue, so retirees can take advantage of their prodigious tax benefits and lack of required minimum distributions. To help Jeff scratch his itch to venture in investments beyond traditional index funds while also obtaining broad market exposure, my After portfolio includes allocations to Vanguard U.S. Multifactor ETF (VFMF) and iShares Edge MSCI Multifactor International ETF (INTF). Even if these two funds’ multifactor strategies don’t end up beating plain-vanilla market-cap-weighted U.S. and foreign-stock benchmarks, their fees are so low that they don’t have a big headwind to overcome.

Because Debra’s Roth IRA is a fairly small piece of their overall retirement assets, it made sense to simplify with a single global equity ETF that takes advantage of their still-long time horizon. Vanguard Total World Stock ETF (VT) provides comprehensive exposure to U.S. and non-U.S. markets at a very cheap price. (Of course, Jeff and Debra will want to take into account the implications of selling out of their individual bond positions in their Roth IRAs before maturity.)

I also like the idea of Jeff taking a hands-off, low-maintenance approach to his 401(k). The Vanguard target-date 2030 option--while not a perfect match for Jeff’s own target retirement date of 2028--is a solid one-stop fund.

I left Jeff and Debra’s taxable portfolio in cash, for a few reasons. They are still making improvements to their new home, which they purchased out of foreclosure; holding cash will provide liquid assets for those projects. And because Jeff is the couple’s main earner, they should have a larger emergency cushion than would be the case for dual-earning couples.

Regarding long-term care insurance, Jeff and Debra should seek out the guidance of a certified financial planner to gauge the appropriateness of such coverage. Such insurance can become cost-prohibitive for older adults, and insurers can also deny coverage owing to other health issues. Nonetheless, Jeff and Debra don’t have enough in assets to be sure they could comfortably self-fund a long-term care need; a heavy long-term care outlay for one of the spouses could seriously jeopardize the financial health of the other. Having a plan for long-term care--whether insurance, a plan to use home equity, or segregating a long-term care fund from their spendable assets--will give them the peace of mind to fully enjoy this next stage in their lives.

Editor's note: Names and other potentially identifying details in portfolio makeovers have been changed to protect the investors' privacy. Makeovers are not intended to be individualized investment advice, but rather to illustrate possible portfolio strategies for investors to consider in the full context of their own financial situations.