Seth feels like he’s playing catch-up on his financial plan.

At 37, he’s happy in his career as a medical researcher and earns a comfortable salary in the low six figures. He and his wife, Jill, preside over a busy and rapidly growing family and live in the Pacific Northwest. They have two biological children, a 4-year-old daughter and a 7-year-old son, and they are also serving as foster resource parents for a 9-year-old boy. “Our long-term hope is to move toward adoption,” Seth wrote.

But Seth is also feeling a bit of pressure to make up for lost time. He started his career in film production in his early 20s and worked in that industry for seven years. He completed his bachelor's degree at the age of 30 and is only just beginning to get serious about investing. “With my career and retirement saving starting a little late, I occasionally feel the need to catch up on my retirement balance and college saving,” he wrote.

And as is the case for many in Seth’s age band, retirement and college funding aren’t the only priorities for his household. He and Jill would like to make some renovations to their home to accommodate their growing family; a kitchen remodel is on the docket for the next year. They’re also charitably inclined, and as all parents know, raising kids is expensive in and of itself.

Unfortunately, the couple’s income in 2020 will be lower than it was in the year prior, thanks to the coronavirus crisis. Jill had recently embarked on a career in real estate and had a successful first year in 2019. That came to a screeching halt in March, however, as the pandemic put a damper on home-buying and -selling. Jill was able to file for unemployment, and the real estate market has begun to pick up again, but the couple’s income has still taken a hit. Seth reports that they developed their budget with the assumption that they’d live on one income, so covering day-to-day expenses hasn’t been a problem, but their savings rate has dropped in the short term.

Seth wrote for help in determining how best to allocate their portfolio and to manage their competing financial priorities. 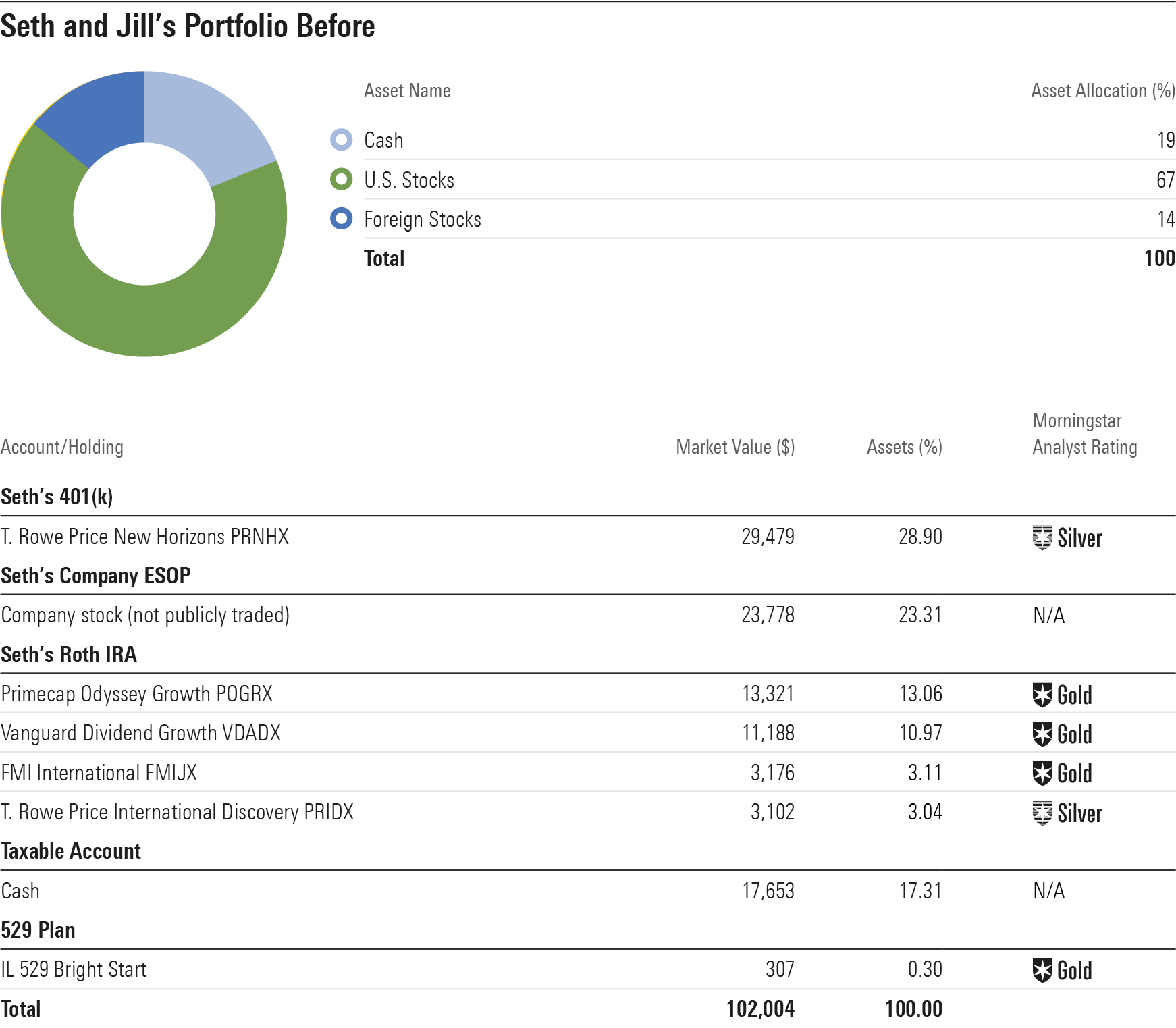 The Before Portfolio The couple’s portfolio is largely invested with their long time horizon in mind. They hold cash in their taxable account, amounting to about 20% of their total portfolio, but the remainder is in stocks and stock funds.

At this point, Seth’s 401(k) is the couple’s main asset. He’s currently contributing to a single fund, the T. Rowe Price New Horizons (PRNHX), a mid-cap growth fund with a Morningstar Analyst Rating of Silver. That fund is largely closed to new investments, but 401(k) plans and other investors who owned the fund prior to its closure can still invest in it.

Seth also has an ownership stake in his company, a private firm, through an employee stock ownership plan. Under an ESOP, a company grants its stock to employees as a retention tool and to foster an employee culture of ownership. Seth’s employer matches contributions into the ESOP of up to 2% of base salary. Those contributions then vest over a five-year period, at which time employees can receive the funds as cash or place 75% of that amount into the 401(k). Seth elects to do the latter to avoid the income tax on the gain and to enlarge his 401(k). “To be honest, this is not my ideal retention tool (or contribution match, for that matter), but the quality of life [at my employer] makes up for this mild ‘first world’ annoyance,” Seth wrote.

In addition to his employer plan, Seth contributes to a Roth IRA, where he’s chosen four terrific holdings, all actively managed stock funds.

They hold cash in their taxable account and also hold a small 529 for their kids. It’s invested in an age-based option within Illinois Bright Start 529, a Gold-rated plan.

Owing largely to Seth’s concentration in T. Rowe Price New Horizons in his 401(k), the couple’s portfolio has a heavy weighting in mid-growth stocks. A fourth of their portfolio lands there, whereas a total market index fund has just 7% of its assets in that Morningstar Style Box section.

The portfolio is also notably light in foreign stocks. Just about 20% of their equity assets are in non-U.S. names, whereas most professional asset-allocation mixes include a fourth to a third of assets in non-U.S. names. 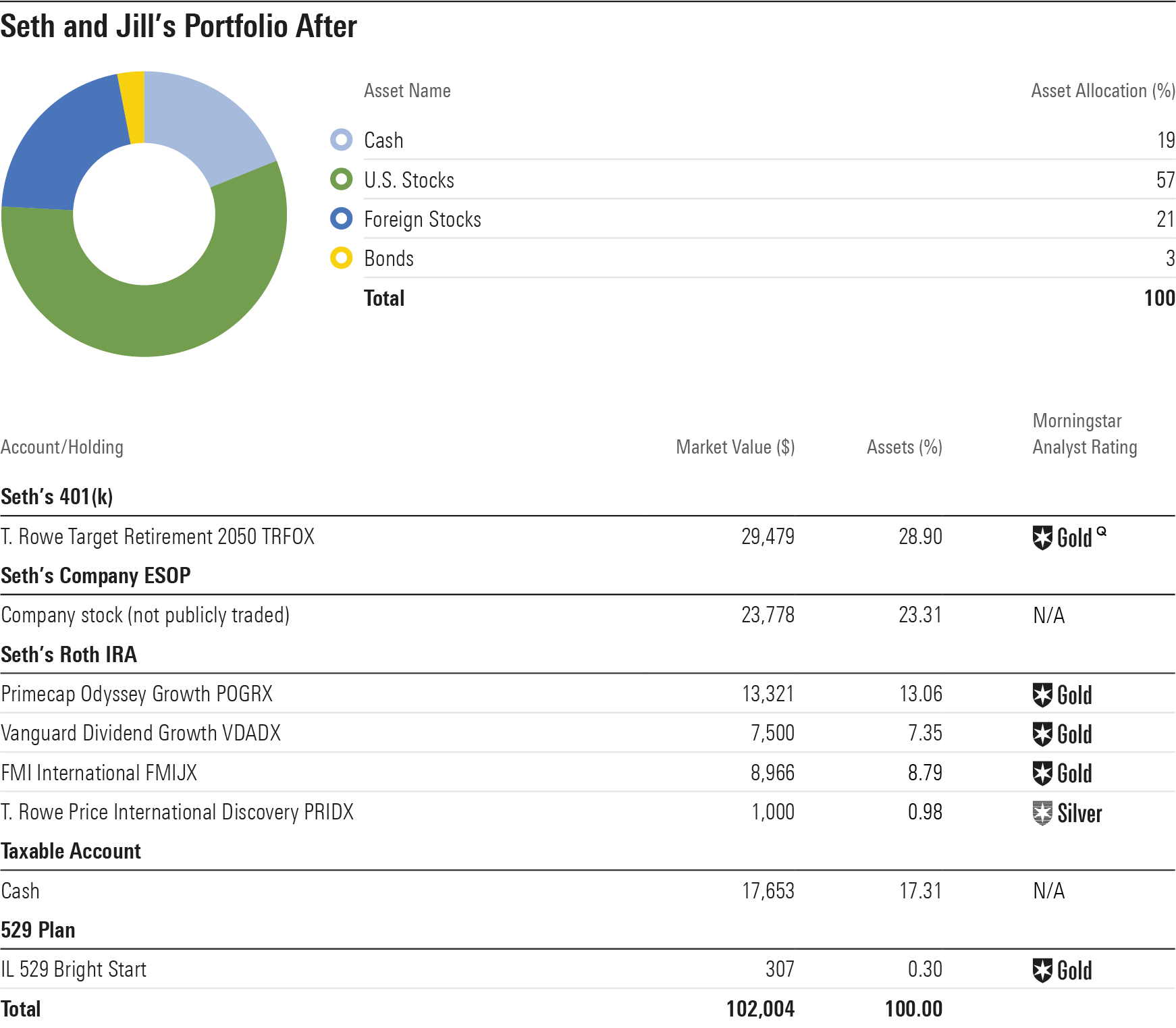 The After Portfolio Given their still-young ages, it makes sense that Seth and Jill’s retirement account would be primarily in equities, and they’ve chosen some solid funds. However, my After portfolio reduces some of the idiosyncrasies of the Before portfolio and also includes a boost to foreign-stock exposure. While the outlook for the U.S. market over the next decade is pretty meager, according to many market experts, lower valuations overseas argue for better return prospects there.

T. Rowe Price New Horizons is a terrific fund, but my bias would better diversify Seth’s 401(k), especially because he expects this account will grow larger in the years ahead and because he has the idiosyncratic risk of his employer stock via the ESOP. To help simplify and make the account hands-off for this busy dad, I like the idea of using a target-date fund in this slot. The Gold-rated T. Rowe Price Target Retirement 2050 corresponds with a retirement at age 67. Because of that long time horizon, it is primarily invested in equities, with a total equity allocation of 90% of assets. It also provides a needed boost to foreign-stock exposure in the portfolio.

I like the combination of funds in Seth’s Roth IRA, but my After portfolio includes a few adjustments to the allocations. Specifically, I pared back on T. Rowe Price International Discovery (PRIDX), which has recently had a very strong performance run, and added more to the Gold-rated FMI International (FMIJX), which has a value tilt and hasn’t performed nearly as well. Like T. Rowe Price New Horizons, T. Rowe Price International Discovery is closed to new investors. But by maintaining a small allocation to that account, Seth will be able to add to his position in the future. In the meantime, I like the idea of steering new contributions to the FMI fund. I also peeled back Vanguard Dividend Growth (VDIGX) a bit to enlarge the FMI position, though the Gold-rated Vanguard fund is a keeper overall.

I would also suggest that Seth and Jill target more in liquid reserves to serve as their emergency fund as well as to provide cash for ongoing home projects. While the standard rule of thumb for emergency-fund size is three to six months’ worth of living expenses, I think it makes sense for single-earner families to err on the high side of that range--if not higher. If Jill’s income continues to improve along with the real estate market, steering extra income into cash reserves would be a good use of those funds. Jill should also consider setting up her own Roth IRA. Not only can that account be used for retirement funding, but Roth IRAs are also good ancillary vehicles for emergency funding, as contributions can be withdrawn at any time and for any reason without taxes or penalties.

In terms of prioritizing their various financial goals, my bias would be to focus on retirement and liquid reserves at this time. At the same time, Jill and Seth can set up small automatic contributions to the 529 as their budget allows. And to the extent that they feel comfortable doing so, they can also let friends and family members know that their kids’ 529 plans are a good option for birthday and holiday gifts.

Editor's note: Names and other potentially identifying details in portfolio makeovers have been changed to protect the investors' privacy. Makeovers are not intended to be individualized investment advice, but rather to illustrate possible portfolio strategies for investors to consider in the full context of their own financial situations.<